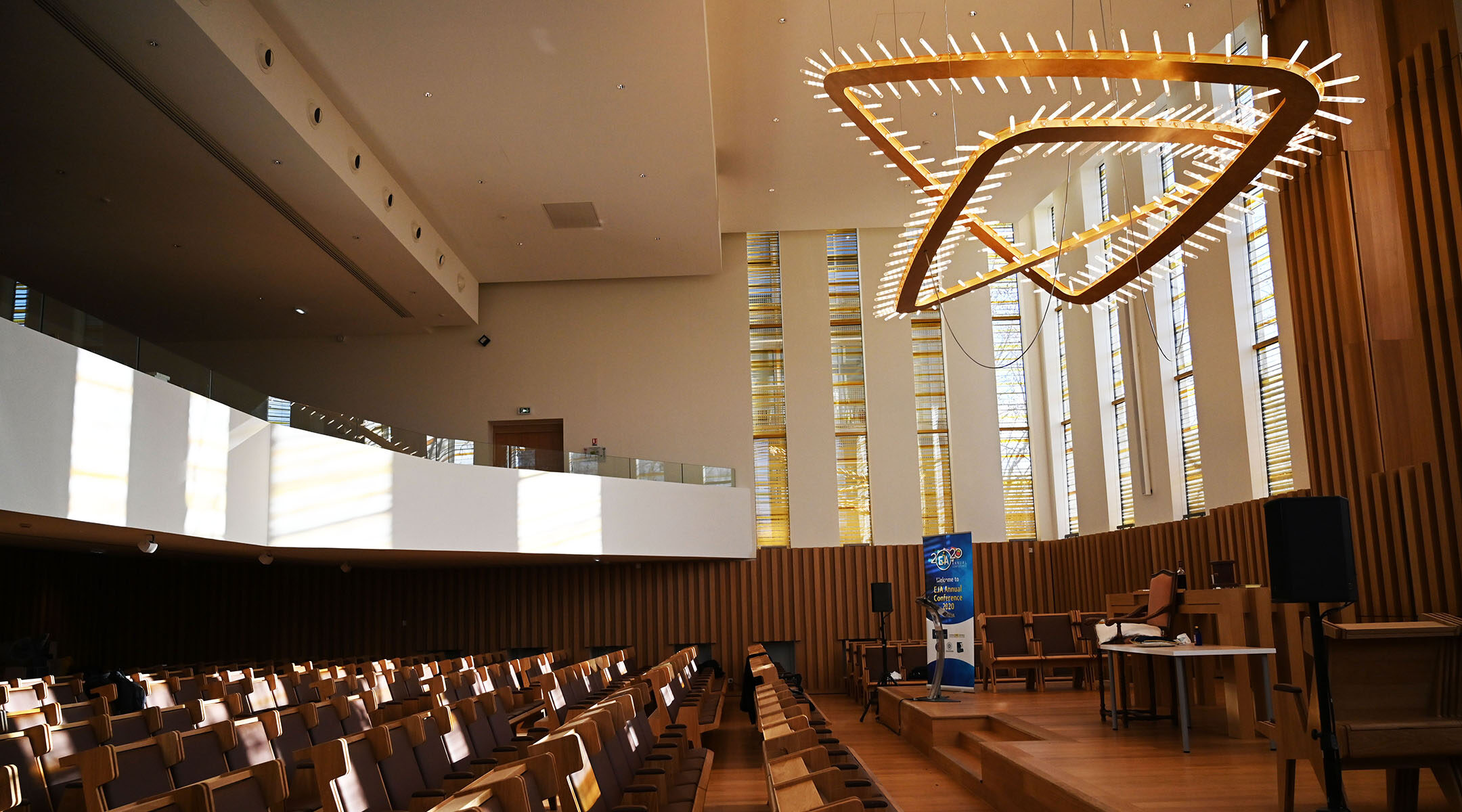 A look inside the Safra Synagogue at the European Jewish Center in Paris, Feb. 26, 2020. (Cnaan Liphshiz)
Advertisement

PARIS (JTA) — On their first visit to this city’s newest Jewish community center, Joseph Madar and Judit Rozlan, a local couple, “ooh” and “aah” like tourists entering an exotic temple.

“It’s so spacious. Huge!” Madar, 62, told his wife on the lobby floor of the recently opened European Jewish Center.

”Finally. This is what a dynamic Jewish community looks like,” Rozlan replied.

These sentiments are common reactions from French Jews who are visiting the new center — a $17 million attempt to revitalize the local Jewish community and assert its vibrancy at a time when many of its own members are questioning its and their future because of antisemitism, emigration and assimilation.

The new building, which opened late in 2019 but due to the COVID-19 pandemic began operating fully only in recent months, is partly a response to these challenges, according to Joel Mergui, the president of the Paris branch of the Consistoire Jewish community group and a major force in making the center a reality.

“The situation is clear and horrible,” Mergui said during a speech in 2019 inaugurating the center. “Whole territories of the French Republic are lost, conquered by Islamist extremists. Thousands of Jews chose to leave some areas, some cities, some European countries, afraid of seeing another bloodbath. No one has the right to judge them. In this context, we must build.”

Mergui’s rhetoric reflects the alarm and anger felt by many Frenchmen, and especially Jews, following a decade punctuated by Islamist terrorist attacks that killed hundreds. President Emmanuel Macron, in a 2019 speech, urged his countrymen to help defeat extremists because “authorities alone […] will not be able to overcome the Islamist Hydra.” 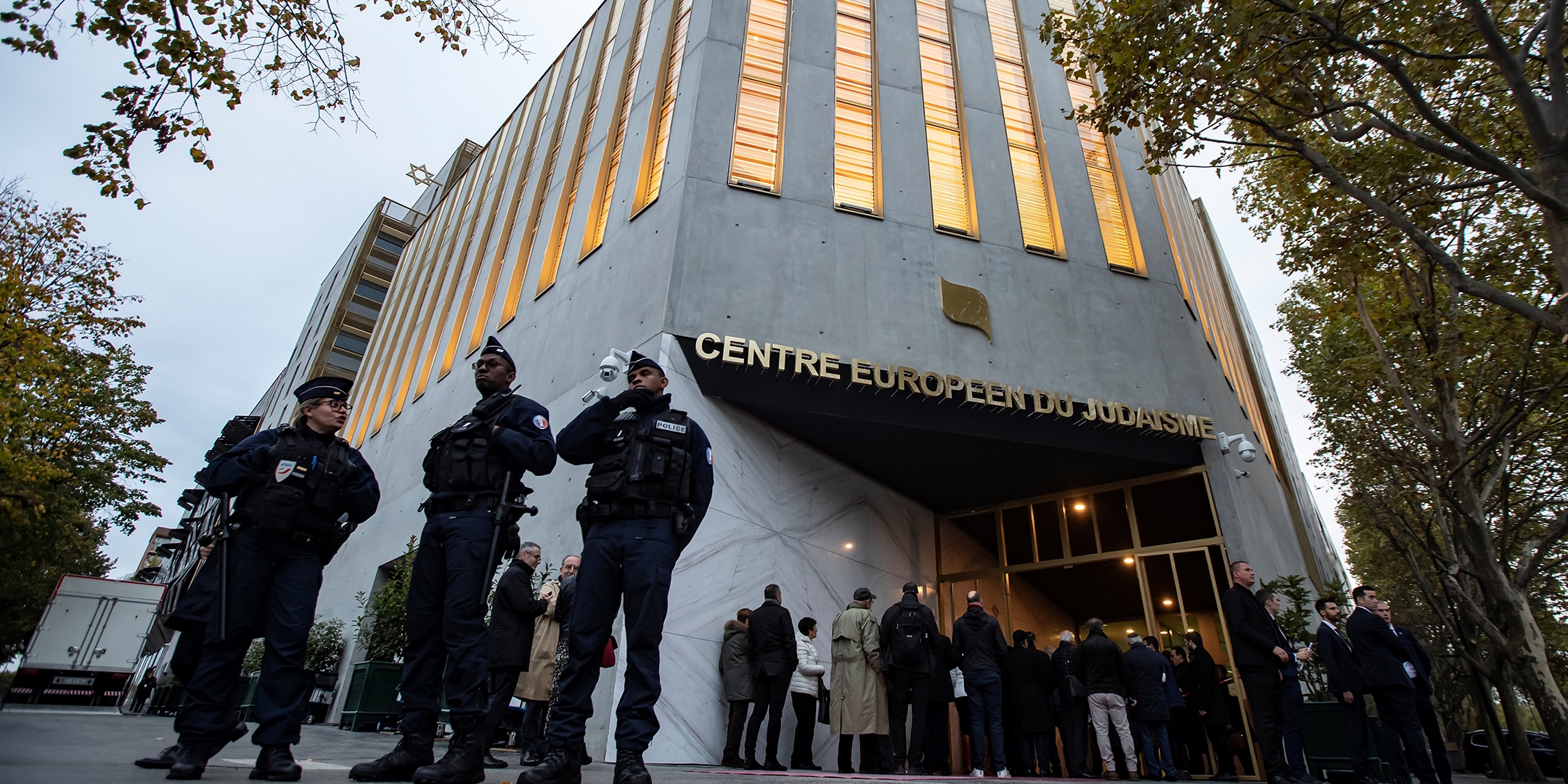 Police officers stand guard outside the European Jewish Center during its inauguration in Paris, Oct. 29, 2019. (Ian Langsdon/Pool/AFP via Getty Images)

In building the European Jewish Center, Mergui and his partners also asserted themselves in a manner that’s uncharacteristic for many minorities in western Europe, where centuries of persecution, the Holocaust and new fears have instilled an instinctive diffidence.

A six-story corner building with 54,000 square feet of floor space and 24 rectangular windows fitted with gold-colored slats running down the entire structure’s length, the Center is eye-catching even in a monument-rich city like Paris.

“Yeah, it’s flashy,” said Mariacha Drai, a celebrity couples therapist, who occasionally gives lectures at the new center. “But for the community, that’s a good thing.”

Paris has five Jewish community centers, or JCCs, according to JCC Global, an international  network of such institutions. But they are all smaller and older than the European Jewish Center, with fewer amenities.

Overlooking Paris’ Jerusalem Square — the municipality named it that in 2019 in preparation for center’s opening and despite opposition from pro-Palestinian groups — the new building includes event halls used for bar mitzvahs and weddings, spacious auditoriums, a gym, a kosher kitchen that does catering, office spaces and a spacious and secure yard for outdoor activities. There is an Orthodox synagogue with 600 seats.

In between waves of COVID-19 infections and the restrictions they triggered, the European Jewish Center has emerged as a hub for diverse activities in a city where communal life revolves mainly around worship.

Paris’s other JCCs include the 50-year-old Jewish Cultural and University Space of Europe, but “the JCC as a concept in France is not what it is in America,” Drai said. “Communal life happens in and around synagogue in France, which leaves out the unaffiliated and separates the denominations.”

Although it contains an Orthodox synagogue, the European Jewish Center is “essentially a cultural space where everyone can come and feel comfortable,” Drai added. “They do. The crowd is diverse and the programming is drawing in people Jews who never go to synagogue.”

In recent years, about 50,000 French Jews have left for Israel alone and their community’s ranks dropped to about 450,000. Even so, French Jewry has a vibrant cultural scene.

At the European Jewish Center, there are about 10 private events each week. There are lectures by communal celebrities, such as Drai and Ariel Toledano, a prominent vascular surgeon, who recently spoke there about medicine in the Talmud.

One of the unaffiliated French Jews who were drawn to the new center is Maxime Checinski, a 55-year-old career counselor who lives in southern Paris. He came to the center for the first time last year for the lecture by Toledano, which Checinski said he enjoyed thoroughly.

But Checinski had had a bad first impression after seeing a plaque acknowledging the contributions of Patrick Drahi, a French-Jewish telecom tycoon who donated millions toward the building’s opening.

An industrialist and proponent of cutting social benefits, Drahi’s name is something of a red flag to many left-leaning French Jews, who often feel alienated toward the Consistoire and other organizations representing France’s right-leaning Jewish community.

“So that was a bad start,” said Checinski, who defines himself as an atheist Jew who does not go to synagogue. Checinski does not know whether he’ll return, he said. “The Drahi connection is a problem for me. And just look at this place. A lot of money went into this place. Where does the money come from, and at whose expense? But I might return for a lecture that really grabs me.”

Funding for the European Jewish Center came from a diverse group of donors, including Drahi; Anne Sinclaire, a journalist and ex-wife of the former International Monetary Fund chief Dominique Strauss-Kahn, as well as the municipality of Paris, Mergui told the Jewish Telegraphic Agency.

The new center also appeals to synagogue regulars, including Sylvia Belaiche, 50, who spoke to JTA at the new center after a lecture she attended there last year. 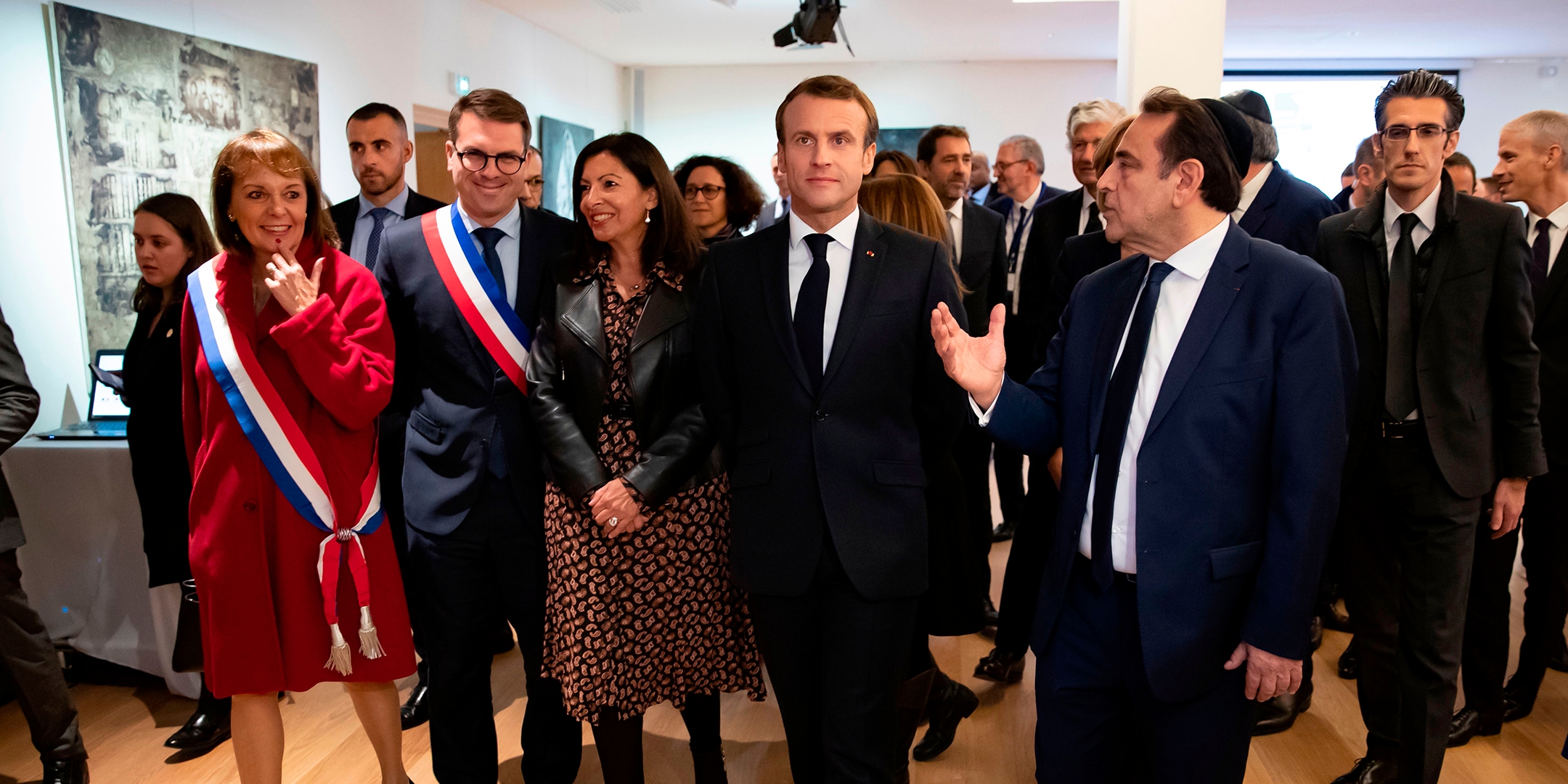 French President Emmanuel Macron, center, and Joel Mergui, right, the president of the Consistoire, visit the Center during its official inauguration in Paris, Oct. 29, 2019. (Ian Langsdon/Pool/AFP via Getty Images)

Paris synagogues are not for meeting new people from the community, she said.

“The men and women sit separately, people stay in groups they know, security prevents you from huddling and chatting outside and you have to go out because there’s another event. It’s rushed. At the European Jewish Center you can actually mingle,” she said.

The new center does suffer from growing pains, exacerbated by its rocky opening amid COVID-19 waves, Drai and other interviewees said.

“It’s a bit chaotic, presenters have a tough time working with the administration. It’s a place that’s still searching for its path, its main theme or own character,” Drai said.

The fact that the word “Jewish” appears in its signage is unusual in a city where synagogues and other Jewish community buildings are recognizable mostly — and sometimes only -— by the police cars and surveillance equipment parked outside.

Security at Jewish institutions has tightened since the early 2000s, when during the second intifada in Israel antisemitic incidents in France went from a few dozen a year to hundreds. It has not returned to double-digit level since.

In 2012, an Islamist gunman murdered three people at a Jewish school in Toulouse. It was the first in a series of deadly terrorist attacks by Islamist terrorists on Jews and non-Jews in France, including the deadly shootings at the Charlie Hebdo satirical magazine and a kosher shop in 2015.

After Toulouse, French Jews for the first time since World War II began debating whether it was advisable to wear their kippahs on the street. Synagogues in France began looking like fortresses and Jewish community events and institutions rarely were advertised with signs.

Those attacks, and hundreds of less bloody incidents, are widely seen as a catalyst for a massive increase in emigration by Jews. Since 2014, about 50,000 of them have immigrated to Israel.

Each new attack deepened doubts in the minds of some members of the steering team of the European Jewish Center.

“I had doubts. I debated it in my head. Each time. Always,” Mergui said in a speech during the 2019 inauguration event, which President Emmanuel Macron attended. Mergui continued: “Are we on the eve of a new exodus, or of a belated reconquest of the lost territories [of the French Republic]? I have asked myself this since I took office, and I still do.” But Mergui added, “no one but us can decide our fate.”

As long as the French state is determined to safeguard the security and liberty of Jews in its territory, “we have the duty of continuing to envision Jewish life in France,” Mergui said.

The new center “is meaningful on the symbolic level to the French Jewish community even just as a monument, even if it were absolutely empty,” Madar, who visited the center for the first time with his wife in April, told JTA. “The fact that it’s bustling is a true testament to the community’s strength.” 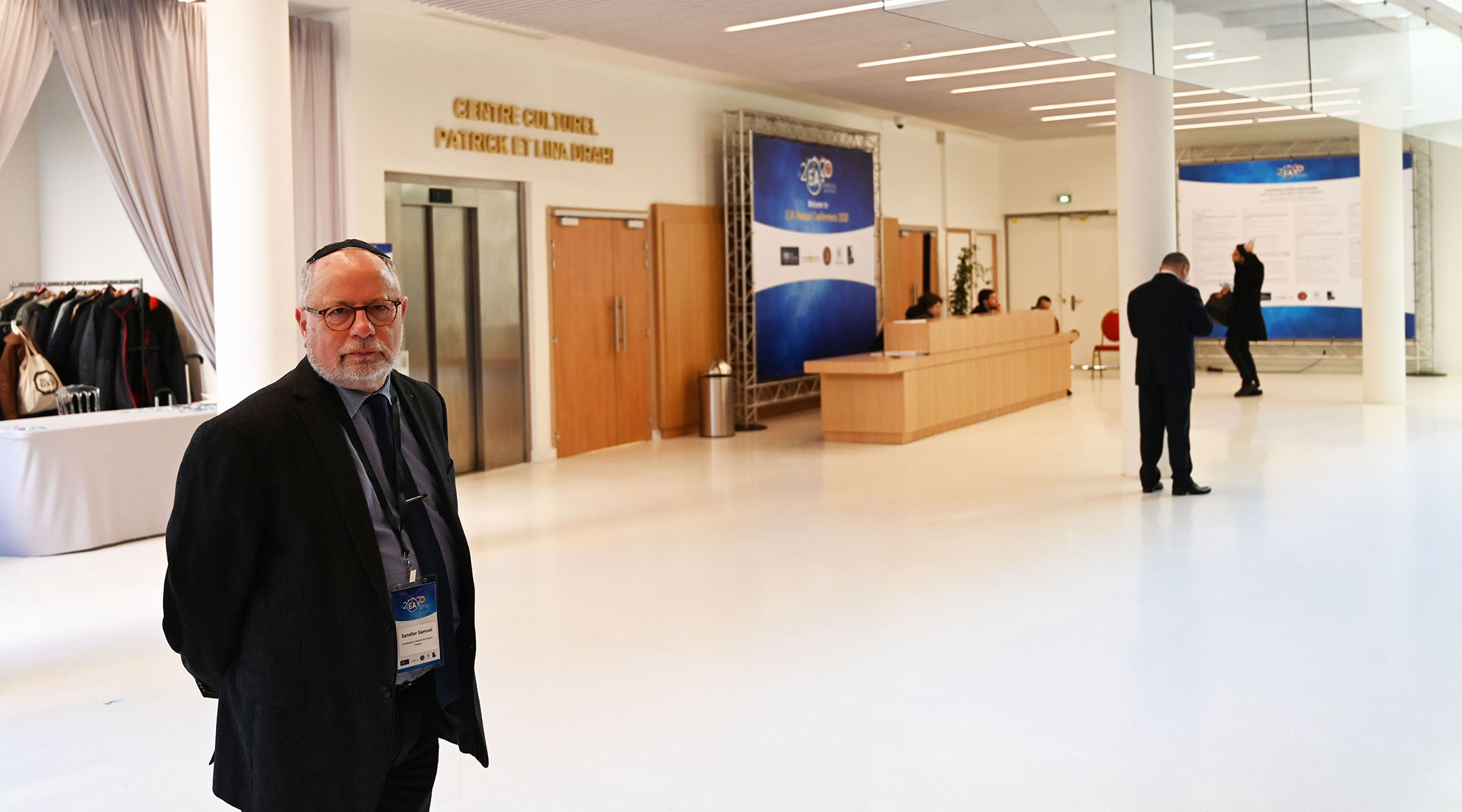 In addition to a synagogue, the building includes event halls, auditoriums, a gym, a kosher kitchen that does catering, office spaces and a yard for outdoor activities. (Cnaan Liphshiz)

The location — in the heart of the 17th district of Paris and near the heavily Jewish suburb of Neuilly-sur-Seine — is also significant.

In a recent trend known in France as “internal aliyah,” Jewish families have been moving to richer districts like the 17th and the 18th arrondissements from poorer neighborhoods where many of their ancestors settled after arriving in France from North Africa starting in the 1950s.

This trend has left institutions that were built in such neighborhoods specifically for North African Jews — like the 10th district’s Jewish Cultural and University Space of Europe – in poorer areas with relatively few Jews.

This upward mobility reflects the successful integration of tens of thousands of North African Jews into French society. But it is also a sign that many are finding it increasingly difficult to live in heavily Muslim areas like La Courneuve, an immigrant suburb where the Jewish population shrank from the thousands to several hundred.

The new building appears to be a statement defying two trends: fears of antisemitism driven by anti-Israel and Islamist sentiment, and discomfort with a far right that drew on xenophobia to make unprecedented inroads in last month’s presidential elections.

“French Jews watch with horror the rise of jihadist terrorism and the far right, which in last month’s presidential elections reached new electoral heights,” said Drai. “But that doesn’t deter them from building up their community — which in turn does little to alleviate their fears.”