U of Vermont ‘vigorously denies’ fostering an antisemitic environment on campus, amid federal investigation 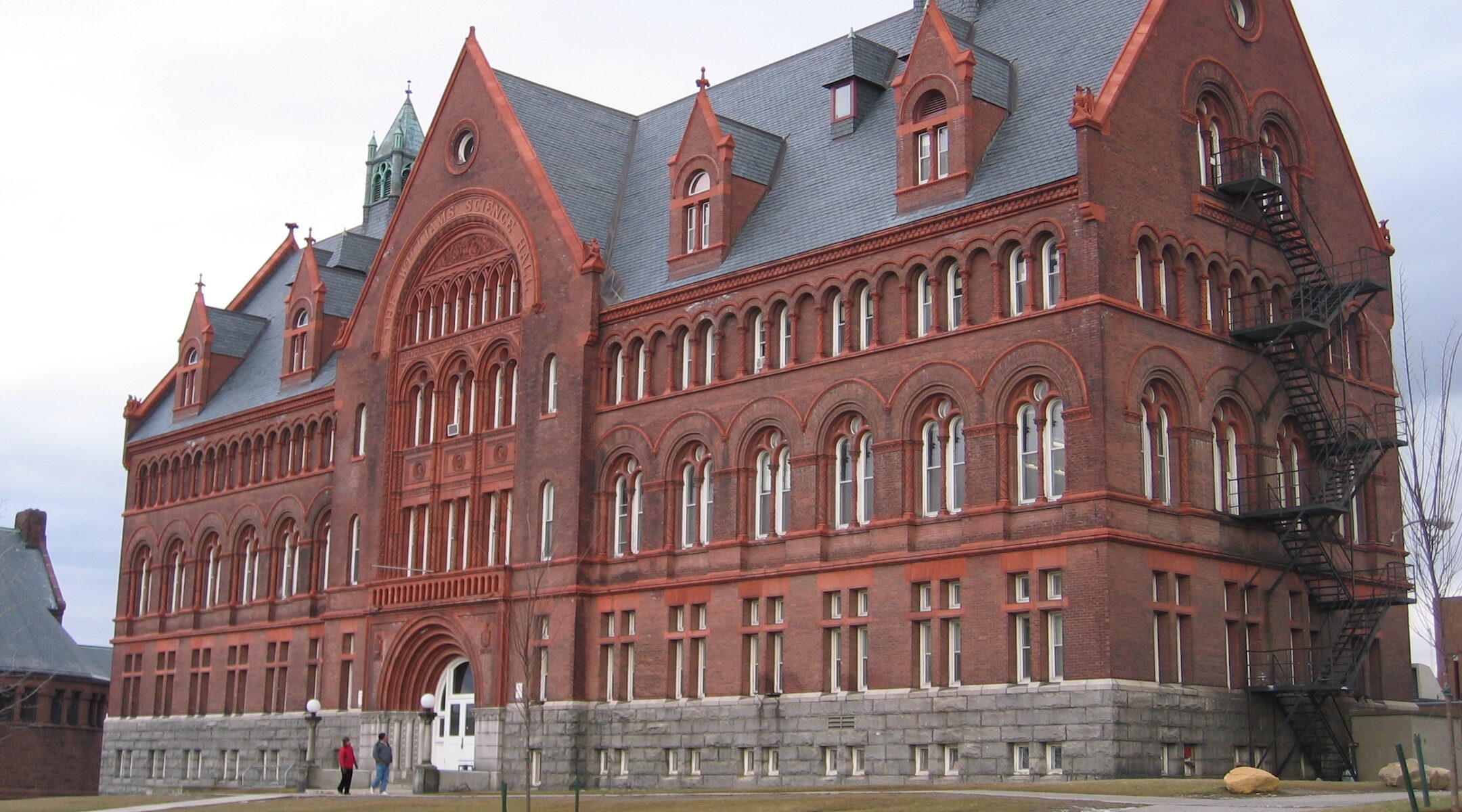 Williams Hall at the University of Vermont in Burlington, Jan. 1, 2005. (Jared Benedict via Creative Commons)
Advertisement

(JTA) – The University of Vermont says it “vigorously denies” allegations that it fostered an antisemitic environment on campus, in a lengthy response to the news this week that the U.S. Department of Education has opened an investigation into whether Jewish students’ civil rights were violated at the university.

A statement Thursday by UVM President Suresh Garimella rejects three of the central allegations in the complaint brought against the university by current and former Jewish students. It’s a more detailed response than those of other schools that have been the targets of similar investigations, and a significantly more forceful rejoinder than UVM’s initial statement on Tuesday.

“While common wisdom dictates remaining patiently silent as we cooperate diligently with an agency’s investigation, I simply cannot do so,” Garimella wrote, saying coverage of the Education Department’s Office of Civil Rights investigation “has painted our community in a patently false light.”

Jewish on Campus, a campus antisemitism watchdog group that counts a former UVM student among its active members, filed the complaint against the university, along with the Louis D. Brandeis Center for Human Rights Under Law, a pro-Israel legal group that has filed several previous federal discrimination complaints at other campuses.

The complaint paints a picture of a campus rife with antisemitism, including students throwing rocks at the university Hillel building in an intimidating manner; university-affiliated student groups, including a support group for sexual assault survivors, denying membership to pro-Israel students; and a teaching assistant openly musing on social media about lowering the grades of Zionist students.

The latter two points, Brandeis Center president Alyza Lewin told the Jewish Telegraphic Agency, were most significant because they signaled that Jewish students’ academic lives were being affected by discriminatory behavior on campus.

Most damningly, the complaint says, the university failed to adequately respond when such matters were brought to top administrators.

Not so, Garimella said, claiming the university responded to all three incidents promptly and in an appropriate manner, and has additionally “reached out on several occasions to our Jewish students over the last year to understand their experiences on our campus.”

The students throwing rocks at the UVM Hillel building, Garimella said, were found to have been trying “to get the attention of a friend.” The student groups that sought to ban Zionists from participating were not recognized UVM student groups, and thus “received no university support.”

And the university’s investigation of the teaching assistant who made remarks about lowering the grades of Zionist students determined that the assistant had made the remarks “prior to serving as a TA,” and that “the objectionable statements did not adversely impact students in the classroom.”

A university spokesperson declined a JTA request for an interview, saying, “We’re letting the president’s message to the community speak for itself.” While Garimella said in his statement that an OCR investigation simply acknowledges the existence of a complaint, not that the complaint has merit, the OCR’s official guidelines for investigating complaints state that not every complaint makes it to the investigation stage.

“It’s discouraging to see the university double down on its denial,” Lewin told JTA, saying that the Brandeis Center still believed UVM had failed to issue forceful enough statements against either the teaching assistant or the student groups who targeted Zionists. “They’re refusing to recognize that the Jewish students are being marginalized and excluded on the basis of this key component of their Jewish identity.”

While noting, “OK, maybe they reviewed the incident at the Hillel building. We can put that aside,” Lewin said that the university still had a duty to more forcefully and publicly condemn the other incidents as part of its formal response to them.

She said that the sexual assault survivors’ group, while not a formal UVM student club, had gained a large enough following that the university had interacted directly with its leaders to discuss campus reforms. Lewin said that, at that stage, UVM should have taken the extra step of seeking out disciplinary action against any students who posted the anti-Zionist comment to the group’s Instagram page.

Matt Vogel, executive director of UVM Hillel, did not respond to a JTA request for comment, but previously issued a statement saying the Brandeis Center and Jewish On Campus are “some of the many resources” Jewish students can use to confront antisemitism. In an email to parents at the start of the fall semester, Vogel also wrote, “Antisemitism keeps me awake at night.”

Other universities that have had federal antisemitism civil rights investigations opened against them since 2019, the year the Trump administration altered the Education Departrment’s guidelines to incorporate the charge, have responded more tentatively while investigations have been underway.

A case at the University of Illinois has resulted in the school opening a new dormitory specifically for Jewish students and pledging to do better to protect its Jewish and pro-Israel students.

“Our work in understanding and eliminating antisemitism will never be complete,” Garimella concluded, noting that he had recently joined an American Jewish Committee trip to Israel, among other initistives designed to combat campus antisemitism. But the complaint’s specific allegations, he said, “were investigated and addressed,” and publicizing them further was “exploitation of fear and divisiveness by advancing false claims.”