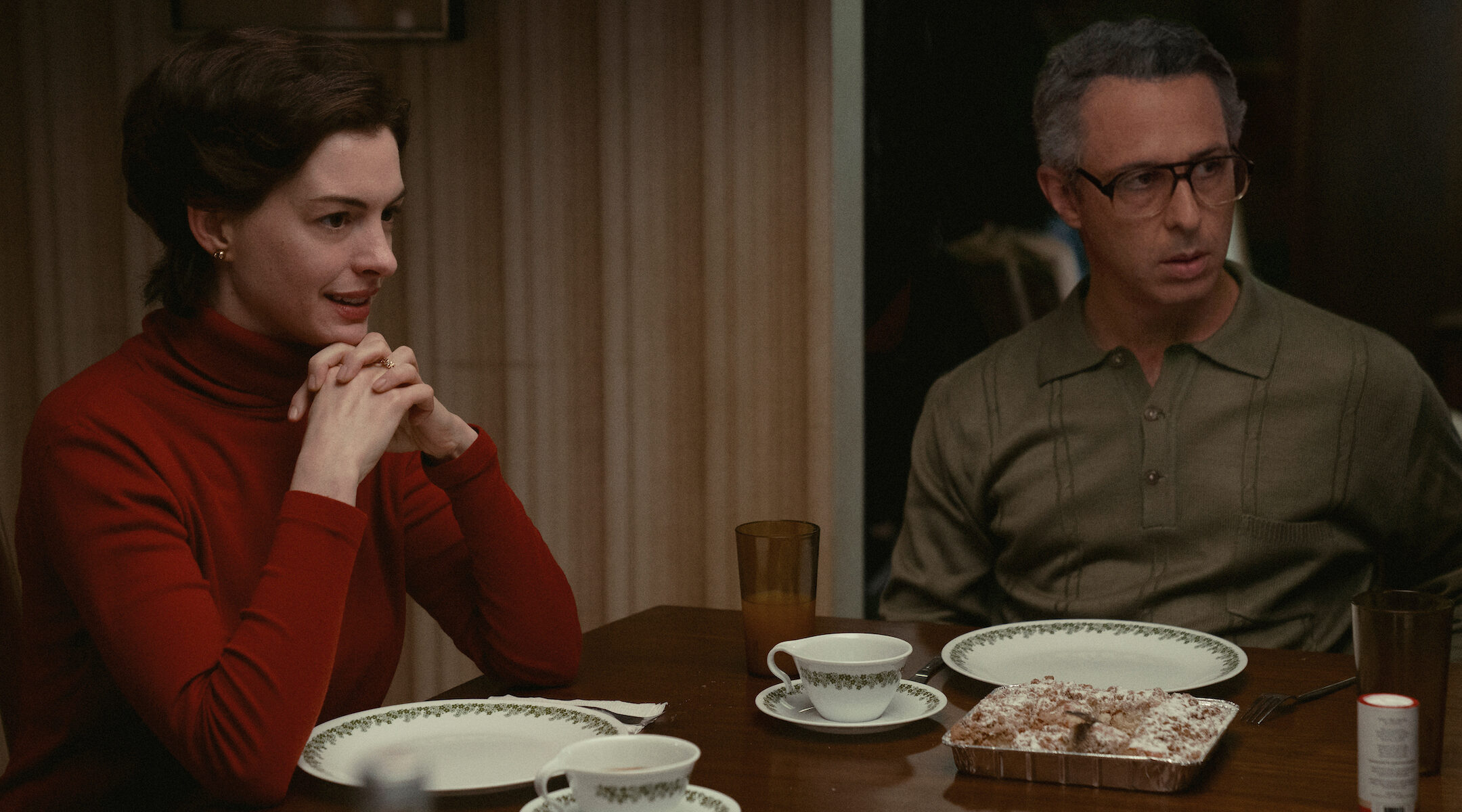 (JTA) – At the fancy private school where he has just started his first day, Jewish sixth-grader Paul Graff (Banks Repata) is asked by a major donor what his last name means. Sheepishly, he admits that it was shortened from the longer family name — one that ends in “-stein.” The donor who asks him about it, sneering at his name, turns out to be none other than Fred Trump (John Diehl).

The scene, filled with quiet menace, is a defining moment in “Armageddon Time,” a new dramatic film from acclaimed Jewish writer-director James Gray (whose other films include “Ad Astra” and “We Own the Night”). Set in Queens in 1980 against the backdrop of Ronald Reagan’s presidential election, the movie depicts a Jewish family desperate to assimilate into a success-driven conservative American culture, and what they might have to morally sacrifice in order to chase that elusive dream. Anne Hathaway, Jeremy Strong and Anthony Hopkins all star in main roles.

In theaters now, “Armageddon Time” is the first of two prestige pictures this fall to focus on a Jewish director’s artistic autobiographical upbringing  — the other, “The Fabelmans,” comes from Steven Spielberg and seems likely to be an awards juggernaut after it’s released in theaters on Thanksgiving. But the two films have different themes: While Spielberg’s is largely a family story, Gray’s movie touches on contemporary debates about the intersection of Judaism and white privilege, and it explores that dynamic in the context of historical antisemitism.

Here’s what you need to know about the major Jewish ideas behind “Armageddon Time.”

Named after a song by punk rock band The Clash and also inspired by contemporaneous comments Reagan made about the imminent arrival of nuclear war, “Armageddon Time” follows Paul, a third-generation American Jew, as he struggles with a transition from a diverse public school to a WASP-y private school. Like his protagonist, Gray also was pulled out of public school as a child and enrolled in a private school that counted Fred Trump as a major benefactor; he has said in interviews that he used to spot Donald Trump roaming the halls.

The film’s central theme — and a source of controversy among its critics — is the relationship between Paul and a Black classmate at his public school, Johnny (Jaylin Webb).

Initially, the two bond in class over a shared dislike of their teacher and mutual love for mischief-making. But after one too many disciplinary actions, Paul’s parents pull him out of the public school and sever his friendship with Johnny. Later, when Paul and Johnny both get in trouble for an incident that was Paul’s idea, Paul’s father is able to exploit family connections to get him off safely, while Johnny awaits a far harsher punishment. Their diverging paths highlight how Paul’s relative privilege allows him to more easily navigate dicey situations than Johnny can.

The movie’s depiction fits inside the long, fraught history of Black-Jewish relations in America, a dynamic that has been scrutinized in recent weeks as multiple Black celebrities have been involved in antisemitism controversies. Both communities have frequently pointed to the bonds forged between them during the civil rights era, but more recent academic studies on their relationship have concluded that Jews were relatively slow to organize on behalf of civil rights, according to Marc Dollinger, author of “Black Power, Jewish Politics.”

Additionally, Eric Goldstein, author of “The Price of Whiteness: Jews, Race, and American Identity,” has argued that Jews largely sought out and benefitted from opportunities to assimilate into white America by the mid-20th century.

“Armageddon Time” depicts this sociological dynamic in miniature, as Paul’s parents (played by Hathaway and Strong) exhibit more than a little casual racism in their discussion of Johnny, and ultimately conclude it’s better for their son to be in a Trump-funded, all-white, non-Jewish “elite” school than to make friends with children of different races and social backgrounds.

Paul’s mother Esther is president of the PTA and plans on running for the local school board, reflecting her own strong desire to use her son’s enrollment in public school as a way to secure leadership roles in her community. But she quickly changes her mind, giving up this level of stature, after she senses Johnny is influencing her son’s bad behavior.

Some critics have argued that the film is guilty of the same sins as Paul’s family, shortchanging Johnny as a character in favor of focusing on Paul’s guilt.

Assimilation as a response to antisemitism

Undergirding every decision Paul’s family makes is their own history of escaping persecution and class struggle, and their fervent belief that success depends on assimilation.

Paul’s grandfather Aaron Rabinowitz (Hopkins) explains to him that he is the descendant of Ukrainian Jews fleeing antisemitic pogroms and of British Jews who opted to move to America to escape the rising tide of antisemitism during World War II. (Gray’s grandparents came from a similar background.) “Remember your past,” Aaron instructs his grandson — although Paul and his older brother belittle and mock a dinner-table story involving the Nazis.

Aaron’s own experiences have made him more inclined to sympathize with other racial minority groups, and he encourages Paul to stand up to racist behavior at his new school, remembering how it felt when he himself was a target of it. But Aaron is also the one who insists Paul go to private school and winds up paying for his tuition, while telling him that his not-Jewish-sounding last name will set him up for greater success.

While Paul thinks of his family as “super rich,” his father Irving (Strong) is actually working-class, and his grandparents are stretching financially to support both his and his older brother’s private school tuition. Throughout the film, Irving — a domineering presence who’s known to whip his child — expresses his desire for Paul to transcend his social stature and turn out “a whole lot better than me.” This, in turn, leads Irving to make decisions for his family that he seems to oppose politically: Even as Irving dismissively calls then-candidate Reagan a “schmuck,” he embraces the Reagan-friendly idea of meritocratic ascendancy through society.

Tellingly, nobody in Paul’s family ever has a discussion about whether he would benefit socially or spiritually from being around other Jewish children — a concern frequently articulated by Jewish parents today.

Further underscoring the film’s assimilation themes, the Graff family at one point takes a trip to the movies to see “Private Benjamin,” the 1980 Goldie Hawn comedy about a sheltered, wealthy Jewish woman who joins the Army. “She was a JAP, but she grew up,” Esther says afterward, employing a derogatory term for “Jewish-American Princess” as she admires how Hawn’s Jewish heroine found her place in a secular American world.

While on a class field trip at the Guggenheim Museum, Paul becomes entranced with a painting by Russian abstract artist Wassily Kandinsky and is inspired to find a career in the art world. Paul’s mere desire to become an artist places him at odds with the rest of his family, not to mention his peers (with the exception of Johnny) and most of his instructors.

The choice of Kandinsky as an inspiration is a telling one from a Jewish lens. Kandinsky himself was not Jewish, and was in fact intensely antisemitic; yet, as part of the Bauhaus movement of boundary-pushing abstract European artists, his work was judged by the Nazis to be “degenerate art,” and more than 50 of his paintings were confiscated by the Third Reich. (Some of then have been repatriated to the Jewish families that once owned them.) He wound up fleeing his adopted home of Germany after the Nazis came to power — a lesson, perhaps, for a family that thinks it can avoid being targeted by society by siding with the prejudices of the mainstream.

Ironically, it was Solomon Guggenheim, the New York museum’s Jewish namesake, who purchased many of Kandinsky’s paintings to make them the cornerstone of the museum and helped preserve his reputation in the art world — thus ultimately bringing him to Paul’s attention.

Jewish authenticity, onscreen and off

In telling the story of his own upbringing, Gray includes many details of his home life that will be familiar to Jewish audiences, including the meals (lox and bagels at one gathering) and the assorted tchotchkes (one family member sets out kiddush cups she says were stolen from Jews during the Holocaust and recovered by the U.S. State Department).

But Gray also chose to cast largely non-Jewish actors to play the stand-ins for his parents. While “Succession” star Jeremy Strong recently told Jewish podcast host Marc Maron about his Jewish father, Hopkins and Hathaway have no Jewish ancestry — making the film yet another bullet point in a long-running debate about Jewish representation onscreen and in popular culture. (Tovah Feldshuh, who has a small role as Paul’s grandmother, is proudly Jewish.)

Gray has argued that he can cast whomever he wants in his own story. “I’m Jewish — I reserve the right to cast someone like Anthony Hopkins,” he told The New York Times. “Does that person [who criticizes the film’s casting] watch ‘The Godfather’ and complain that Marlon Brando is from Omaha, Nebraska, and not an Italian New York guy?”

It’s a conversation about Jewish authenticity that bleeds into the film’s depiction of American Judaism itself.