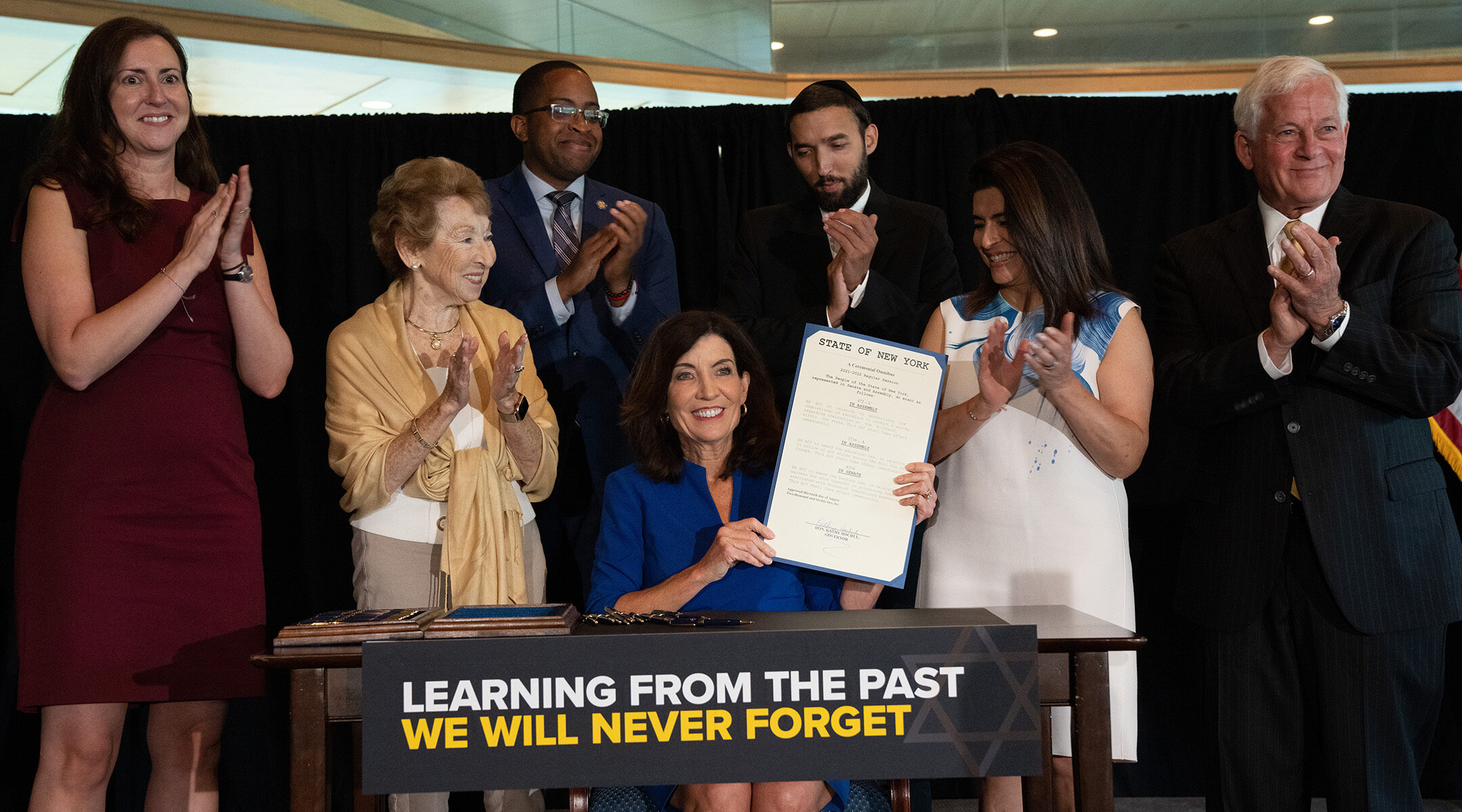 (JTA) — Sasha Bandler and Josh Davis feel lucky to have learned about the Holocaust directly from survivors, but this wasn’t part of any formal education. The high school seniors found the Holocaust lessons at their Long Island schools inadequate.

“We’ve learned very little about the Holocaust aside from a general outline of what occurred,” said Davis, a student at Great Neck South High School. “In AP World History, my class spent about two class periods discussing the events of the Holocaust.”

Great Neck South’s Holocaust education differs from that at Paul D. Schreiber High School in Port Washington, and yet students there still find it unsatisfactory.

“My high school included ‘Night’ by Elie Weisel in its freshman-year curriculum, which I believe is a great first step in changing its Holocaust education,” said Bandler, a student at Schreiber High. “But I think there’s a long way to go to make sure students leave high school with a complete understanding of the Holocaust.”

For teen Isaiah Steinberg, Holocaust education came in his upstate New York middle school. “We read ‘Surviving Hitler’ in sixth grade, and we brought a Holocaust survivor to our school to talk with us,” Steinberg said, referring to a young adult book based on the experiences of Holocaust survivor Jack Mandelbaum. But still, he said he’s learned more from YouTube’s “Infographics Show” than in a classroom, where “in 8th grade, we probably spent three days. In 11th grade [AP U.S. history], we spent maybe one class.”

Student stories like these highlight the shortcomings and inconsistencies of New York’s efforts to require Holocaust education. Coupled with rising antisemitism across the state, legislators in recent months have sought to strengthen Holocaust education in New York, one of 23 states that have a mandate to teach the Holocaust. In August, Gov. Kathy Hochul signed a law requiring a state-sponsored survey to track how school districts teach the Holocaust. Legislators see this as the first step in combating antisemitism in the state, even if it does not change the current regulations on Holocaust education. Instead, it will act as a barometer for how well schools are following the laws in place, allowing the Education Department to guide them in the right direction.

“The ideal outcome of the survey is that we identify those schools that are failing to meaningfully instruct students on the history of the Holocaust, and that those schools work with the State Education Department on a corrective action plan that gets them on track as quickly as possible,” said State Sen. Anna Kaplan, a representative of northwest Nassau County and a sponsor for the new Holocaust education act.

Sixty percent of Millenial and Gen Z New Yorkers surveyed did not know that six million Jews were murdered, and 19% believed Jews caused the Holocaust—the highest in the nation, according to a 2020 Claims Conference survey.

“I think there are some glaring statistics out there where students can’t name any concentration camps, and people don’t know what Auschwitz is,” said Assemblywoman Nily Rozic, a representative of Northeast Queens and one of the act’s sponsors.

New York’s legislation continues a trend of the state being proactive in teaching the Holocaust to its students. Public schools have been required to teach about human rights violations, with “particular attention to the study of the inhumanity of the Holocaust,” since 1994. But the statistics from the Claims Conference survey demonstrated to Rozic and Kaplan that New York schools were not following this law. Rozic and Kaplan said a change to the legislation was necessary to ensure New York’s students graduate with meaningful knowledge of the Holocaust.

The surveys, developed and distributed by the Education Department, have already been sent out to every public school across New York. They ask superintendents to outline what Holocaust education looks like at the elementary, middle and high school levels, and what training their teachers have in Holocaust education. The survey does not ask about how the curriculum is taught, rather, it only asks the superintendents to verify that they are teaching about the Holocaust.

These surveys were due to the Education Department by Nov. 10, 2022. According to Rozic, the department’s review of the results is expected by the beginning of 2023, at which point it will recommend changes to school districts that are not providing satisfactory Holocaust education, which is loosely defined in preexisting legislation.

If schools do not respond, or their answers do not indicate that Holocaust instruction is provided at their district, the Education Department will take action, prescribing a corrective action plan.

Of the many potential action plans, the common thread is that more time must be spent in educating students on the Holocaust.

“I think schools should spend a little more time teaching the topic though,” said Marnie Ziporkin, a senior at Commack High School, “so that students can fully comprehend why this event was so impactful to the entire society and Jews especially.”

While the act does not provide for legal changes to curriculum or consequences for school districts whose Holocaust education is deemed unsatisfactory, Kaplan says it is a step in the right direction to providing proper Holocaust education to students across New York State.

“At the end of the day it comes down to us wanting to provide students with the education that is required by law,” said Kaplan.