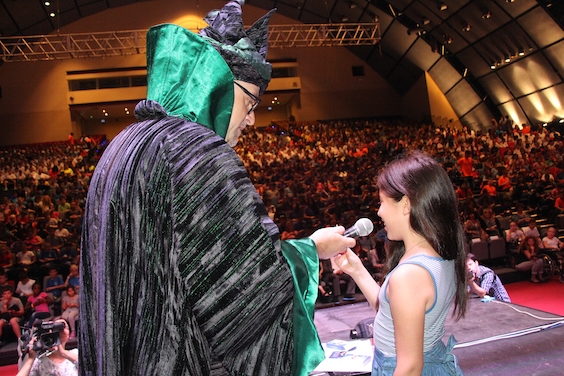 You’ve probably seen that magic trick where a lady gets sawed in half. And maybe some sword swallowers, or the superstar David Blaine?

Now check out the new world record for the largest magic lesson, presented by Israeli magician Cagliostro. And the most magical part about it is not the cards, but the message he is dealing out to the world.

On June 1, 2015, Cagliostro gathered 1,573 Jewish, Christian, and Muslim schoolchildren to be part of something called Haifa Magic for Peace. The cards he gave out, instead of having queens, kings, and jacks, had words that could promote communal understanding:

Cagliostro taught the children in small groups how to perform the trick. Each magician-in-training had someone else choose a word card they thought was most effective for the peace process. After choosing the word, s/he put the card back into the deck without the magician seeing it. Then with a magic spell and a wave of a wand, the chosen card mysteriously rose up out of the deck. Ta da!

The enchanted event was organized by Beit HaGefen – a nonprofit center in Haifa that creates intercultural programs for all ages. But remember, magic can happen anywhere as long as you listen and believe.