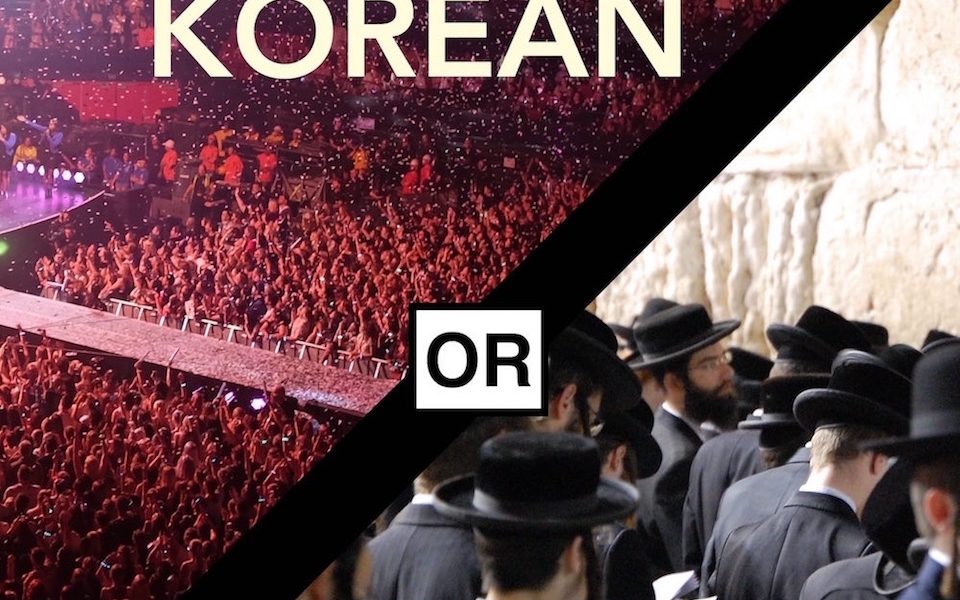 Think you could tell the difference between Korean and Hasidic pop music? Since you’d be hard pressed to find two more dissimilar cultures, you might think it’d be easy. But a new quiz on—wait for it—koreanorhasidic.com puts you to the challenge. You’ll see that it’s not as easy as you’d think.

Try for yourself. You get ten short instrumental audio clips from popular Korean and Hasidic tunes and then a simple question: Which is which? Your guess is, most likely, wrong.

In these examples, both K-Pop (Korean pop) and Hasidic pop share the same pulsing rhythms, driving brass (or synthesized brass), and similarly rely on the Phrygian scale aka “the Jewish scale,” the harmonic mode dominant in much Middle Eastern and Jewish music. They sound almost exactly the same.

And if this isn’t evidence enough of a spiritual bond between the two cultures, there are plenty of other examples. Take the time scores of Hasids danced to the K-Pop smash hit “Gangam Style” at a wedding.

Or the many times that “Hava Nagila” has been performed by Korean choirs—both professional and high school. Oh and then there’s that smash single “Mazel Tov.”

And if you’re still unconvinced, read this riveting story from the New Yorker about how Korean students in a boarding school an hour north of Seoul study Talmud. The goal, according to the school’s founder, is to receive a “Jewish education” in addition to a Korean one, because Jews have thrived so long and are worth studying. Imagine the musical possibilities.