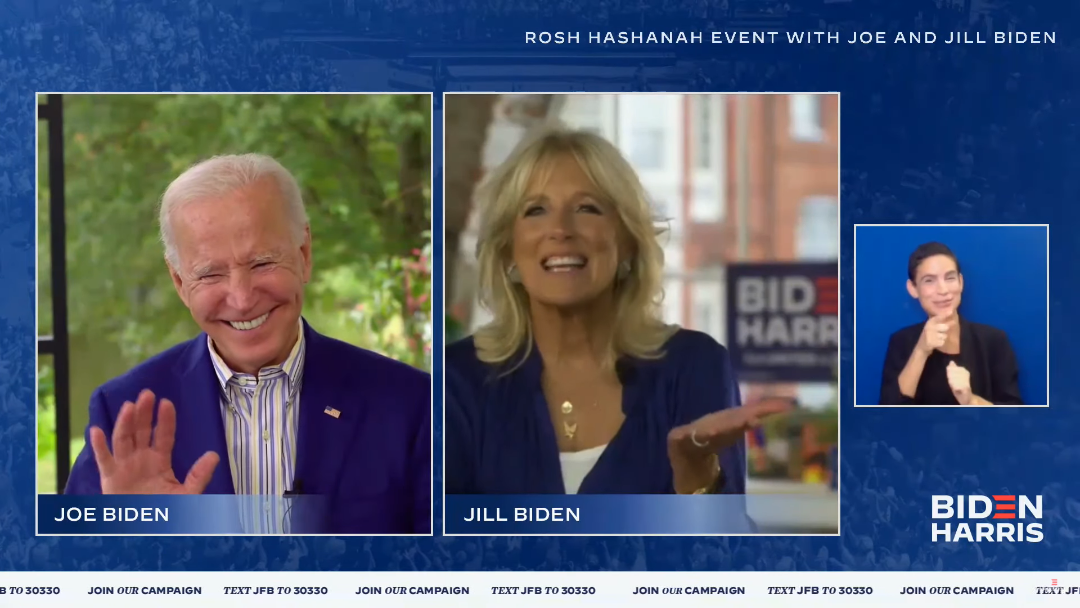 Joe and Jill Biden speak to Jewish supporters in a webinar on September 17, 2020. (Scerenshot)
Advertisement

(JTA) — Jill and Joe Biden greeted Jewish supporters for the Jewish New Year and cast the holy day’s message as an imperative to drive President Donald Trump from office.

It was the second New Year’s greetings-turned-pitch for votes of the season. Trump made his own appeal Wednesday during a White House call to Jewish supporters.

“These are the Days of Awe that give us a chance to restart, to speak up,” the Democratic presidential nominee said Thursday in a webcast organized by Jewish Americans for Biden, an arm of his campaign. “What kind of country do we wish to be? Both of our faiths, yours and mine, instruct us not to ignore what’s around us.”

Biden, a Roman Catholic, noted the persistence of the coronavirus pandemic, the social unrest over racism and the economy. “A common thread between them is a president who makes things worse, who appeals to the dark side of us,” Biden said.

Biden launched his campaign for the presidency, he said, because he was appalled at what he said were Trump’s equivocations in condemning deadly racist and anti-Semitic violence.

“As Rabbi Yisrael Salanter taught, ‘as long as the candle is still burning, it is still possible to accomplish and to mend,'” she said. “I hope these days of awe renew your spirit for these days ahead.”

Joe Biden, who has pushed back at progressives within his party who want to step up criticism of Israel, said, “we can pursue peace in the world including by remaining a steadfast ally of Israel.”

He concluded, “Shana Tova everyone, we can do this, it’s got to be a better year than last year.”