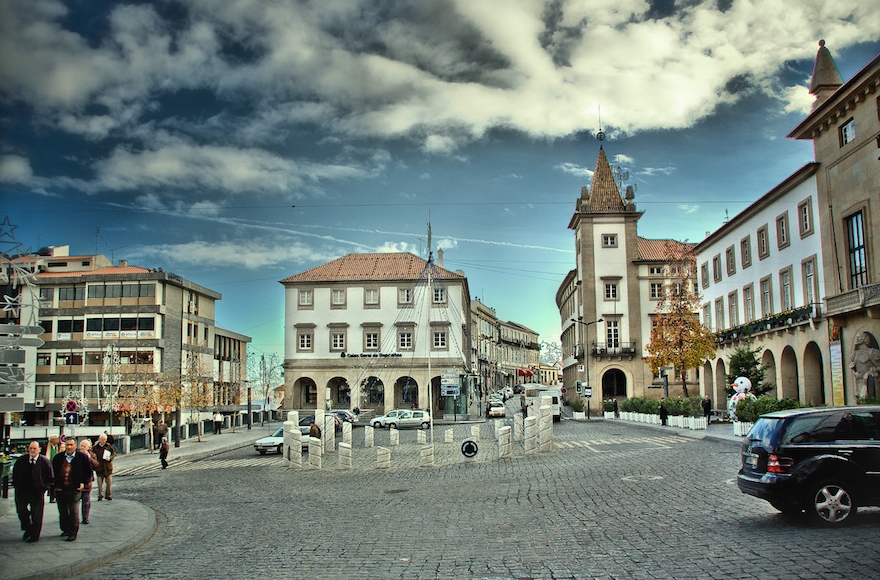 (JTA) — A small city in northeast Portugal unveiled for the first time a 400-year-old Torah scroll that a local contractor had found 10 years ago at a demolition site and kept wrapped up in linen.

The ancient scroll, written on parchment, was put on display in Covilha City Hall on Friday, Portugal’s Diario de Noticias reported. Measuring 98 feet in length and 2 feet in width, the Torah scroll is believed to have been used in secret during the Portuguese Inquisition by crypto-Jews, or so-called New Christians.

The scroll, which is in excellent condition even after centuries of storage in less than ideal conditions, will be taken for preservative storage at the end of the month, the paper reported.

It was discovered during a demolition carried out in 2006, according to the daily. A local contractor, who was not named, was intrigued by the scroll and took it from the site. He kept it rolled up in a bed sheet at his home until earlier this year, when he mentioned it to archaeologists working on a different project, who offered to help him figure out what the object was.

Portugal once had a Jewish population of hundreds of thousands before 1536, when the country initiated its version of the Inquisition – a campaign of persecution led by the Catholic Church and local rulers against non-Christians, who fled the Iberian peninsula en masse or stayed after converting to Christianity under duress.

Whereas many of the Jews who fled tried to take certain religious artifacts with them, including Torah scrolls, others hid them before leaving in the hope of retrieving them one day. Others still converted but kept using the artifacts to practice their faith secretly. In some parts of Portugal, this meant risking dispossession, torture and even death. But in other areas, and especially where converted Jews had a major role in trade, local authorities and the church turned a blind eye to Jewish worship, which survived for decades before eventually dying out.

Carlos Madaleno, the coordinator of municipal museums in Covilha, told Diario de Noticias that the old Jewish quarters of the city was no longer in existence when the scroll was used. He said it was likely the possession of forced converts to Christianity who kept the scroll in secret.

“This Torah was found adjacent to a church that was frequented by New Christians, and was built in the 16th century,” he said.

In the town of Trancoso near Covilha, the stone walls of many houses feature well-preserved incisions made after the Portuguese Inquisition. The marks include Hebrew letters that when read inversely spell “Horror” or flattened door frame panels marking the absence of a mezuzah.