Why American Jews should care about voter suppression in Israel 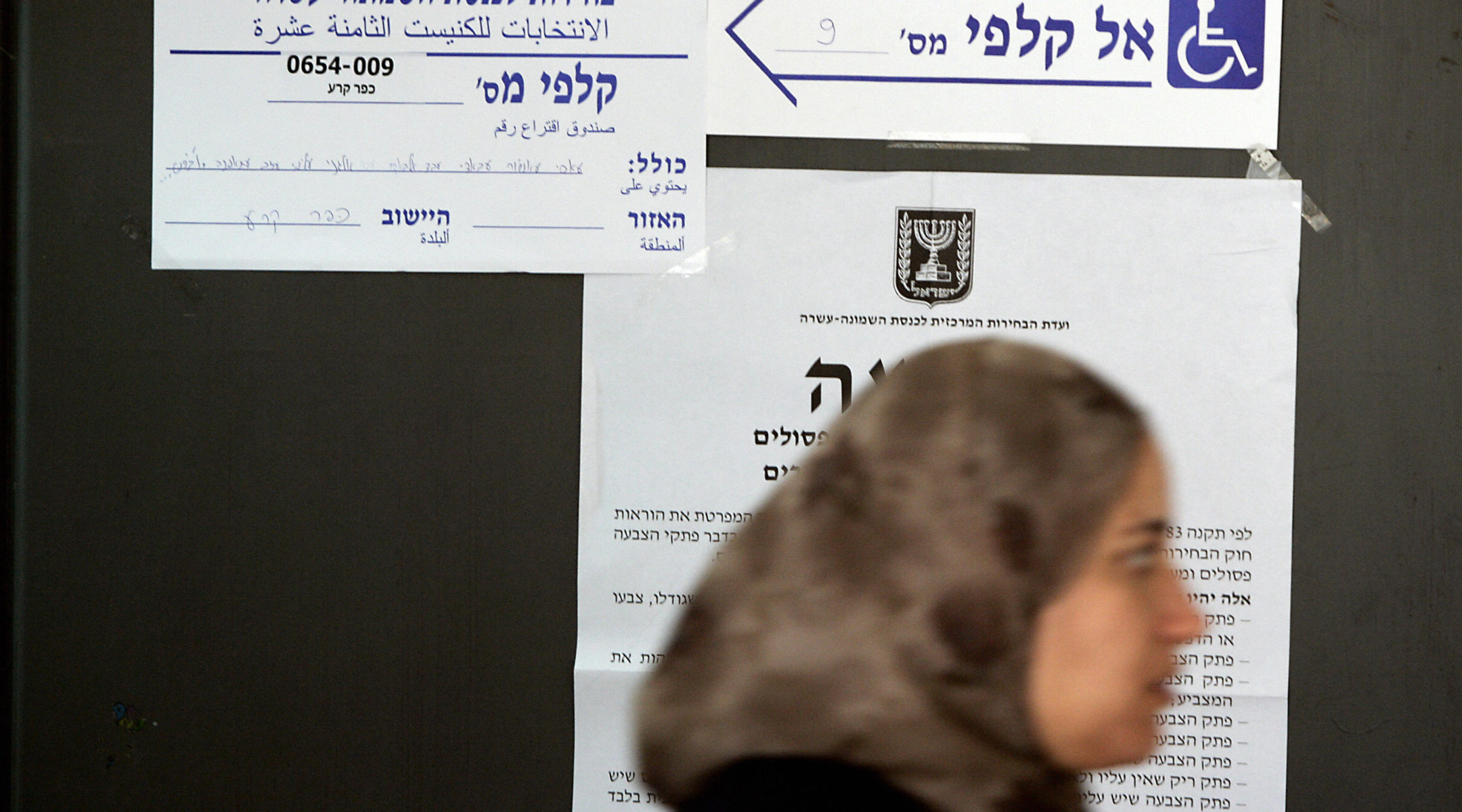 JERUSALEM (JTA) — On Election Day in Israel this April, Prime Minister Benjamin Netanyahu’s political party, the Likud, dispatched some 1,200 activists armed with hidden cameras as “poll watchers” in Arab townships. It was not long before they were discovered, sparking fear and outrage through Israel’s Arab electorate.

International watchdog groups say the presence of cameras in polling stations can drastically suppress votes and reduce the confidence of voters, who may fear their individual votes will be tallied or their images will be gathered for possible retaliation.

As a voter suppression tactic, it’s not clear if the camera stunt worked in Israel. But when the election was over, the Likud’s organizers took credit for the fact that less than 50 percent of Israel’s Arab citizens had shown up to vote.

The Israeli right is offering us an Israel with the heart of democracy cut out. Access to the ballot box is a right that Israel has guaranteed to all citizens. Arab citizens have been voting since the very first Knesset election in 1949.

American Jews who care deeply about democracy at home and also support Israel have an obligation to fight for democracy in Israel. Whatever your opinion on how much American Jews should be allowed to criticize Israel, fundamental threats to democracy — of which denial of the right to vote is one — constitute a red line. Any and every friend of Israel must fight for the health of Israeli democracy.

The Likud’s tactic for voter suppression recently had its day in court. Israeli civil society organizations argued that placing cameras only in Arab polling places suggested that the voter surveillance was not about election integrity, but about intentionally intimidating Israeli Arabs out of exercising their most basic democratic right. So when the Central Elections Committee ruled to uphold that guarantee and ban the Likud cameras in the next round of elections, we saw a small victory for democracy.

American democracy is riddled with problems of enfranchisement that resemble the problems in Israel: Minority voters in America face cumbersome voter ID laws, purged voter rolls and restrictive polling hours. Often these tactics, like the Likud’s cameras, are justified with claims that they prevent “voter fraud.”

Of course, most Americans see through this. They know that these are right-wing schemes to lower minority voter turnout and overwhelm citizens with layers of bureaucracy in order to upend equality at the ballot box.

The Likud made no attempt to hide its partisan ploy for voter suppression.

On September 8, roughly a week before the next elections, the Likud attempted to ram through a defiant new expedited Knesset bill that would allow select party-nominated observers to record in polling stations after all.

Both Israel’s Attorney General and the head of the Elections Committee were virulently against this bill, which would have changed the rules for election on the eve of an election. And if Avigdor Lieberman, who had said he would vote with Netanyahu for the bill, had not decided at the last minute he would not give, what he called, “Netanyahu’s private militia” the power to record, the bill might well have passed.

The force of Netanyahu’s push for anti-democratic legislation like this shows that he will stop at nothing to strongarm and intimidate those he sees as his political foes, even when it means throwing core elements of democracy under the bus.

Marking the Arab minority as a “danger from within” is a win-win political strategy for the right. Either it depresses the Arab vote or gins up the right-wing base through fear and turns out its supporters in higher numbers.

This tried-and-true tactic is now a staple of the right in Israel. On the day of the 2015 election, Netanyahu warned his supporters in a grainy Facebook video that “the right-wing government is in danger.”

“Arab voters are coming out in droves to the polls,” he said. “Left-wing organizations are busing them out.”

In this April’s election, he made himself even clearer, writing on Instagram, “Israel is not a state of all its citizens … it is the nation-state of the Jewish people only.”

This election cycle, Netanyahu and his allies are again weaponizing anti-Arab racism to tar centrist political figures. A series of campaign ads warn that a vote for Netanyahu’s centrist challenger, Benny Gantz, is actually a vote for the Arabs.

Netanyahu also released a series of Facebook videos over the past few days in which he claimed, with scant evidence, that Israel’s Arabs “stole” the last elections through rampant voter fraud and vowed to legislate polling place surveillance.

“We will not allow them steal the elections again,” he said.

This week, the Likud filed a petition to stop Israel’s version of MoveOn.org, Zazim, from helping Bedouin voters access the polls on Election Day. This is how the Israeli right marginalizes Arab citizens.

Netanyahu’s Likud legislated the marginalization of Arab citizens last year when it passed a controversial Basic Law, a type of pseudo-constitutional amendment, known as the Nation-State Law. This legislation — now a black stain in Israel’s legal code — formally privileges Jewish citizens over non-Jews. The law insinuates that the rights of Arab citizens are merely a privilege granted to them by the Jewish majority.

But what distinguishes Israel (and America) from other countries whose leaders employ populist and hypernationalist tropes is a civil society that is unafraid to fight back. When the Likud’s voter suppression operation was uncovered, civil society went to work. Adalah-the Center for Minority Rights in Israel, and Zazim, a community mobilization group, submitted petitions and testified before the Elections Committee arguing that cameras in Arab polling places are unacceptable.

These groups, alongside the Association for Civil Rights in Israel, demanded that cameras be banned. And the joint Arab-Jewish community organizing group Standing Together stood outside and protested the Likud surveillance operation as the Elections Committee, which is chaired by a Supreme Court justice, heard testimony.

No progressive organization in Israel sat out this fight. Battling the potent threat of right-wing populist governments is the challenge of our political age. And what gives us strength, and brings Israelis of all backgrounds and persuasions together, is a shared common vision for a future defined by justice, equality and full democratic rights for all.

We are many. And we are not going anywhere.

Mickey Gitzin
is the Israel director of the New Israel Fund.
The views and opinions expressed in this article are those of the author and do not necessarily reflect the views of JTA or its parent company, 70 Faces Media.