Where does Amy Klobuchar stand on anti-Semitism, Israel and other issues that matter to Jewish voters in 2020? 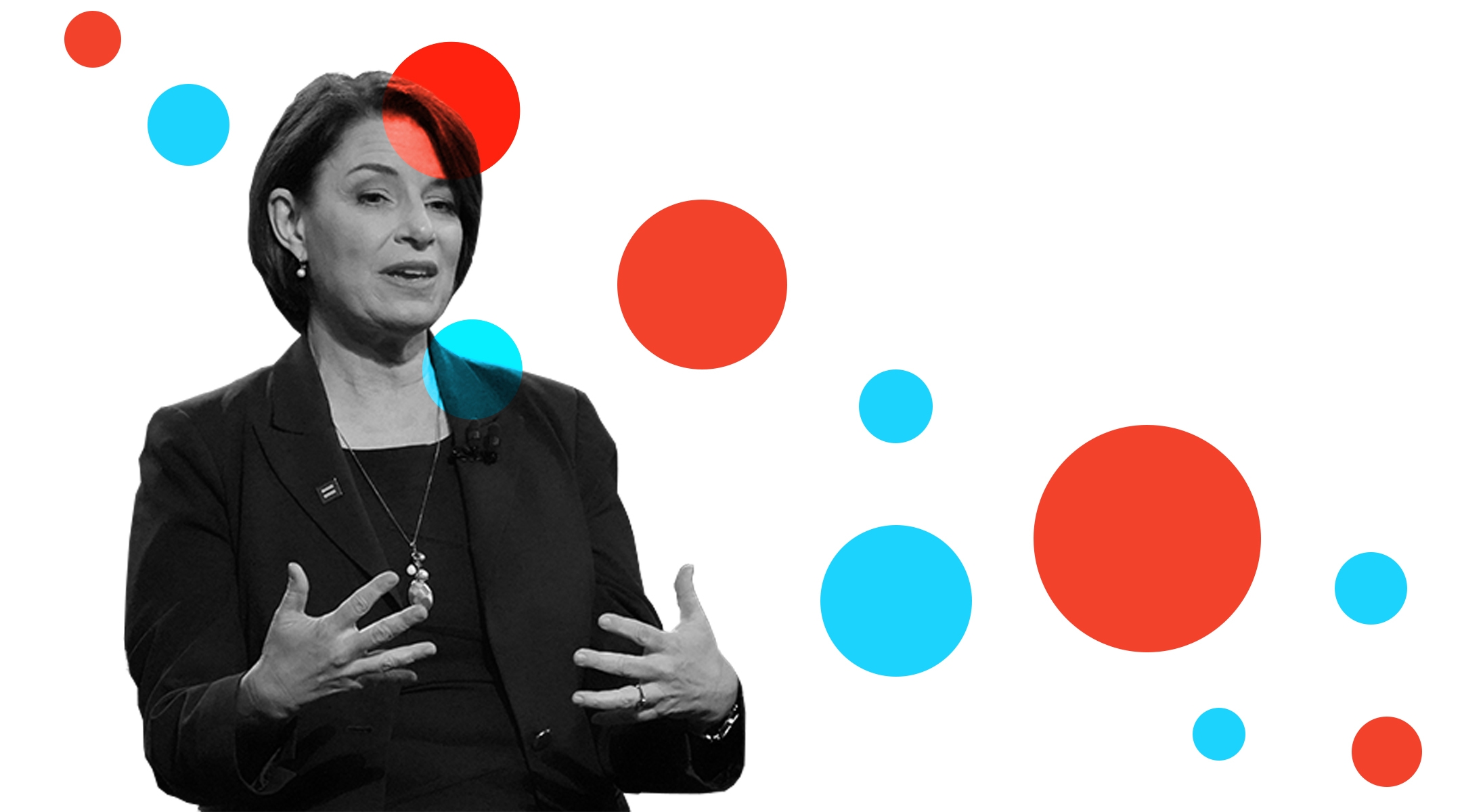 Update: On Mar. 2, 2020, Amy Klobuchar announced that she is dropping out of the 2020 presidential race.

(JTA) — Amy Klobuchar likes to say that she can get things done in Congress. Her appeal as a moderate who can muster support in the middle of the country has fueled her resurgence to relevance in the 2020 campaign.

So, perhaps unsurprisingly, the senator from Minnesota is popular among both Jewish Republicans and Democrats in her home state.

“She’s ubiquitous in the Minnesota Jewish community,” Steve Hunegs, the executive director of the Jewish Community Relations Council of Minnesota and the Dakotas, told the Jewish Telegraphic Agency.

What has Klobuchar said about anti-Semitism?

In November, Klobuchar’s Twitter account shared an article about how a far right network orchestrated synagogue attacks, and wrote, “As President, I’ll counter the divisive rhetoric that has grown all too strong in the past few years — and emboldened hate groups. For our Jewish communities & communities of all backgrounds, we must make it clear: there’s no room for hate in America.”

Stop the fear-mongering and stop the hate. We may come from different places. We may pray in different ways. We may look different. And love different. But we all live in the same country of shared dreams. pic.twitter.com/qFtvHy49Ll

“We must condemn hate without equivocation and stand up for its victims, whether they worship in our Mosques, synagogues or churches,” she wrote on Twitter in March 2019.

After a Jewish Community Center in St. Paul, Minnesota, was evacuated due to a bomb threat, Klobuchar tweeted, “It is unacceptable for their good work to be threatened by hate.”

She has tweeted about Holocaust Rememberance Day, the Chabad of Poway attack, the Pittsburgh synagogue shooting and a 2015 Jewish roundtable. (She also tweeted once about GOP attacks against George Soros criticized by some as anti-Semitic.)

Amy Klobuchar congratulated her “friend” and fellow Minnesotan in August 2018 when Omar won the primary for her Democratic district. Klobuchar has defended Omar from Trump’s attacks multiple times since then, but they’re no longer so friendly. Omar has endorsed Bernie Sanders for president, and Klobuchar has said she is not sure she would invite Omar to speak at the Democratic convention, were Klobuchar to win the nomination.

Regarding Omar’s comments seen as tied to the anti-Semitic of dual loyalty, Klobuchar has said, “You can be American and care about other countries, whether it’s Israel or Ethiopia or Canada — and there’s nothing wrong with that.”

She has a solid relationship with the American Israel Political Affairs Committee, the largest pro-Israel lobby in the country.

Speaking at AIPAC’s Policy Conference in 2018, Klobuchar said that Israel should remain a bipartisan issue, explaining, “A lot depends on the Jewish community in America because I believe that you can find common ground while still standing your ground.” She met with Minnesota AIPAC delegates in 2019.

Met today with Minnesota @AIPAC to discuss policies that ensure a strong and secure Israel. We also talked about the importance of the U.S.-Israel relationship. Thanks to all who attended our meeting! – AK #AIPAC2019 pic.twitter.com/C4IT0ZGQ4W

What does Klobuchar say about the movement to boycott, divest from and sanction Israel — commonly referred to as BDS?

Klobuchar was the only Democratic presidential candidate to vote in favor of the recent anti-BDS bill, which “codifies $38 billion in defense assistance to Israel and which provides legal cover to states that target the boycott Israel movement.” Other Democrats have expressed concerns that the bill could hamper free speech.

On her senator website under “National Security Issues,” Klobuchar’s position on BDS reads: “As staunch allies of Israel, we must also ensure that harmful movements, like the resurgence in anti-Semitism and the Boycott Divestment and Sanctions (BDS) Movement are not successful. The BDS movement undermines a two-state solution and is counterproductive to both Israelis and Palestinians.”

What does Klobuchar think about solving the Israeli-Palestinian conflict?

“As President, Senator Klobuchar will get back to a meaningful peace process that combines — not separates — the political and economic tracks, has buy-in from Israelis, Palestinians, and the Arab world, and ultimately leads to direct negotiations between Israelis and Palestinians themselves that can lead to a two-state solution,” her campaign spokesperson told Vice.

What about aid to Israel? And settlements and annexation of the West Bank?

Tommy Vietor, co-host of Pod Save America, asked Klobuchar about these issues at the J Street conference in October.

“Recently Sen. Elizabeth Warren and Mayor Pete Buttigieg said they were open to the idea of conditioning some U.S. assistance to Israel if Israel either annexes the West Bank, or if there’s continued settlement construction. Would you be open to conditioning aid, or withholding aid as leverage, to prevent annexation or stop settlement construction?”

Klobuchar replied: “I think we are at this moment in time where it’s not a good idea to negotiate these things right now. But let me be very clear in how strongly I believe that that promise that the prime minister made during his political campaign was wrong — that he was going to annex a third of the West Bank. Also the Golan Heights, and what he did there, I disagreed with that.”

But later in the conversation, Klobuchar affirmed her commitment to continued aid to Israel.

“I just think allowing Iran to have a foothold in Syria… with Russia does not make Israel any safer and getting out of that [Iran] agreement did not make Israel safer. And that is why I am so wedded right now to making sure we are continuing the aid,” she said.

What about Klobuchar’s thoughts on Netanyahu?

She criticized Netanyhu’s decision to partner with Otzma Yehudit, an extreme far-right party to try to form a government coalition, although her tweet did not mention Netanyahu by name. She was the first presidential candidate to critique this decision.

Any other Israel things to know?

Klobuchar, like many other Democratic candidates, would not move the U.S. embassy back to Tel Aviv. She told the Jewish Insider, “I think it would have been better if that was done as part of a negotiation for a two-state solution. I think it’s unfortunate it was done the way it was done but I wouldn’t reverse it.”

In 2005, she tried to explain what feather boas are to then Israeli Prime Minister Ariel Sharon, while talking about Jesse Ventura — the former pro wrestler and governor of Minnesota.