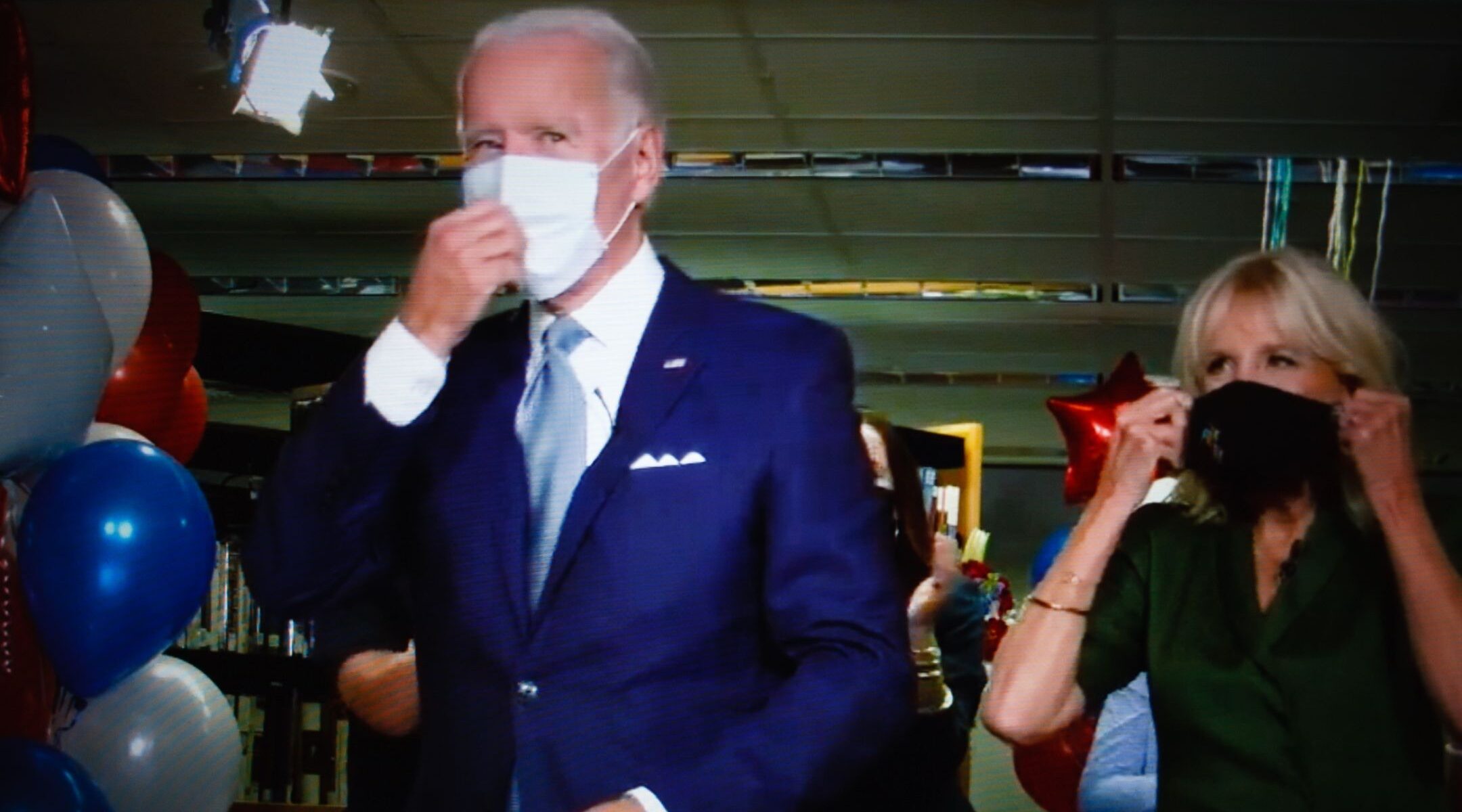 Joe Biden, with wife Jill, puts on a mask after formally becoming the Democratic nominee for president during the virtual 2020 Democratic National Convention, livestreamed online and viewed on a laptop screen from London, Aug. 19, 2020. (David Cliff/NurPhoto via Getty Images)
Advertisement

Sarsour, whom Jewish groups have accused of crossing the line from Israel criticism into anti-Semitism, appeared at a meeting — on the sideline of the Democratic convention — of Muslims who will be campaigning for Biden for president.

The Republican Party posted five seconds of her appearance on Twitter, in which she said referring to Muslim Americans, “The Democratic Party is not perfect, but it is absolutely our party in this moment.”

With unusual swiftness, the Biden campaign was on it.

“Joe Biden has been a strong supporter of Israel and a vehement opponent of anti-Semitism his entire life, and he obviously condemns her views and opposes BDS, as does the Democratic platform,” a spokesman said, referring to Sarsour’s embrace of the Boycott, Divestment and Sanctions movement targeting Israel. “She has no role in the Biden campaign whatsoever.”

Biden’s swift disavowal of the Palestinian-American activist was a signal of how far the pendulum had swung in the recent back-and-forth between the Democratic Party’s pro-Palestinian progressives and its more traditional centrist pro-Israel sector. At least at the top, the conventional pro-Israel view remains in place. But progressives can still point to several important developments during the past year, which activists on both sides argue means the fight is unlikely to disappear.

Here’s a rundown of what’s making each camp happy these days.

Why traditional pro-Israel Democrats are happy

Biden won: Just 10 months ago, as the Democratic primaries shifted into full gear, there appeared to be two seismic changes suggesting that progressives were winning the fight to change how Democrats talked about Israel.

In October, at a conference of J Street, the liberal Jewish Middle East policy group, three presidential candidates — Sens. Bernie Sanders and Elizabeth Warren, and South Bend, Indiana, Mayor Pete Buttigieg — said they would leverage assistance to Israel to pressure it to fall into line with U.S. policies. Viable candidates for the White House had never embraced such a position.

Then in March, Sanders and Warren boycotted the annual policy conference of the American Israel Public Affairs Committee, also technically unprecedented. (Sanders “boycotted” the conference in 2019, but actually had not been invited to speak.)

That caused speculation about the party’s drift away from Israel — but then Biden, one of the country’s longest-standing friends, a man who calls himself a Zionist and ridiculed the notion of leveraging aid to Israel at around the time of the J Street conference, became the nominee.

The platform: When Sanders endorsed Biden, they consulted on a number of areas where Sanders wanted to see Biden move left; foreign policy notably was not one of them. Biden personally intervened to keep the word “occupation” out of the party platform. The platform’s language on Israel was robust and aid was sacrosanct.

“Democrats believe a strong, secure and democratic Israel is vital to the interests of the United States,” it said.

If there were concessions to the progressives, they were affirmative — in emphasizing Palestinian rights, not in criticizing Israel. The platform condemned the boycott Israel movement, but also said it should be protected from legal retaliation, citing free speech.

Kamala: Biden’s most important hire so far has been his running mate, California Sen. Kamala Harris. The selection was greeted with dismay by progressives, mostly because of Harris’ past as a law-and-order prosecutor and state attorney general, but also because, like Biden, she is seen as aligned with AIPAC.

Harris is among the minority of Democrats in Congress who have not accepted J Street’s endorsement, and she joined a resolution that essentially denounced the Obama-Biden administration for allowing through a U.N. Security Council resolution that condemned Israel’s settlements.

Harris, whose husband is Jewish, rejects the boycott Israel movement, but like most Democrats opposes any legislation that would penalize the movement, citing speech freedoms. She rejected calls to boycott AIPAC.

Why progressives are happy

The other primaries: Yes, Biden is at the top of the ticket. But progressives registered a string of high-profile primary victories in several congressional districts.

Two freshmen congresswomen who support the boycott Israel movement — Minnesota’s Ilhan Omar and Michigan’s Rashida Tlaib — won contested primaries. A third boycott supporter won a primary earlier this month in a St. Louis district that is overwhelmingly Democratic and likely will be joining Omar and Tlaib in Congress in January.

Engel received the support of House leaders — but so did Omar, despite claims that she was guilty of deploying an anti-Semitic trope when she said pro-Israel politicians are bought and paid for. (Omar later apologized for some but not all of her controversial remarks.)

Omar faced a potentially tough fight due in part to the wave of pro-Israel campaign contributions to her challenger. But in the final stretch she received financial support and an endorsement from House Speaker Nancy Pelosi.

Notably, when Omar came under fire last year for her tweets about pro-Israel politicians, Harris issued a statement rejecting Omar’s arguments but also expressed concerns that the backlash was spurred in part because Omar is Black and Muslim.

A seat at the table: Harris might not have been the first (or second or third) choice of progressives. But many are happy with her hiring of Karine Jean-Pierre as senior campaign adviser. Jean-Pierre is a former official of MoveOn, the progressive group that organized the push to have candidates to boycott the AIPAC conference, and endorsed the AIPAC boycott in a big way. In an opinion piece in Newsweek on the topic, she declared “You cannot call yourself a progressive while continuing to associate yourself with an organization like AIPAC.”

To be sure, Biden has close advisers who are well known and liked in Israel, including Tony Blinken, a former deputy national security adviser, and Colin Kahl, who helped broker the deal that brought U.S. funding to Israel’s Iron Dome short-range missile defense system. But Jean-Pierre’s appointment and Pelosi’s support for Omar underscore the fact that boycotting Israel or AIPAC is not a barrier to establishment support — or a seat at the table.

Shifting sands in Congress: In the past year, Democratic lawmakers in the House and Senate openly took the fight to Israeli Prime Minister Benjamin Netanyahu over his pledge to annex parts of the West Bank and quashed a top legislative priority of the centrist and right-wing pro-Israel camps.

In June, the vast majority of Democrats in the U.S. House of Representatives signed a letter urging Netanyahu not to make good on his pledge. AIPAC’s influence was clearly visible in the House letter — there was not a hint of a threat that the U.S.-Israel relationship would be damaged if Netanyahu went ahead. But 19 Senate Democrats, among them pro-Israel stalwarts, wrote a letter to Netanyahu warning that annexation would “fray” ties with Israel. Sen. Chris Van Hollen, D-Md., proposed legislation that would keep Israel from spending U.S. money for annexation.

Democrats also effectively buried various legislative measures that would attach penalties to joining the movement to boycott, divest and sanction Israel. Pro-Palestinian progressives rejoiced, but the reason the bills went under was because of lobbying by the ACLU, which said penalizing boycotts violates speech freedoms. It didn’t help that a number of courts upheld challenges to state anti-BDS laws.

Time could be on their side: Pro-Palestinian activists attending the convention said there was a sea change coming, in part because younger Democrats did not have the same attachment to Israel.

“I do believe that in 2024, we will see a very different platform debate because they think the power balance is shifting, because the demographic balance is shifting,” James Zogby, a longtime pro-Palestinian party activist said in a meeting organized by the Arab American Institute, where he is president. “And we’re in for a very interesting ride in the next four years.”