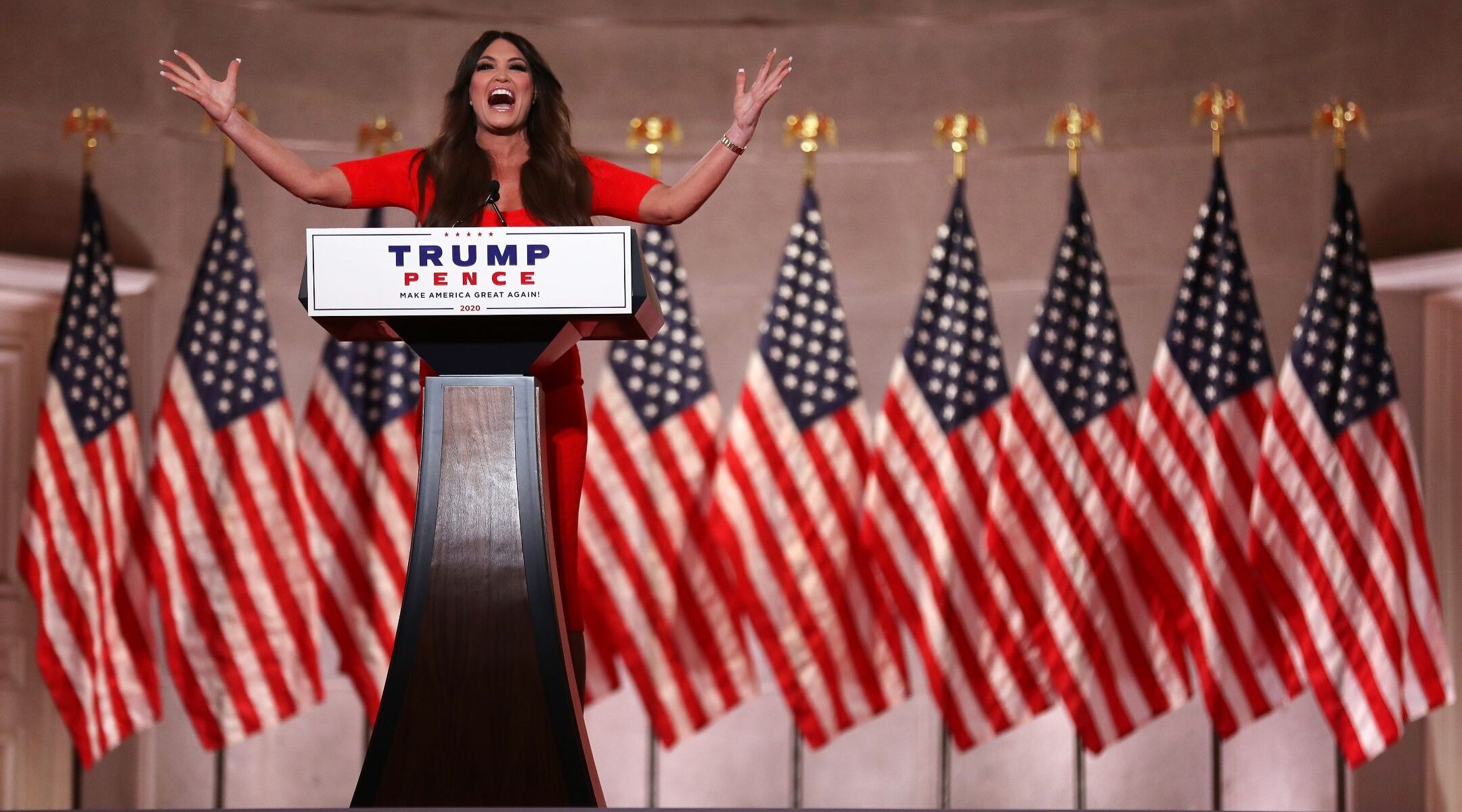 Kimberly Guilfoyle prerecords her address to the Republican National Convention at the Mellon Auditorium in Washington, DC on August 24, 2020. (Chip Somodevilla/Getty Images)
Advertisement

(JTA) — Israel came up every one of the four nights of the Republican convention. So did “elites.”

Speakers as diverse as Vice President Mike Pence and a lobsterman from Maine cited moving the U.S. Embassy to Jerusalem as evidence that President Donald Trump is a man of his word.

Just as reliable were the invocations of “elites,” an amorphous class of people who at best ignored the average American’s needs and at worst sought to control your thinking.

The mention of the Jewish national homeland and a mythical centralized control-wielding power tied together the two strands woven through the fraught story of President Donald Trump’s administration and America’s Jewish community: its tight embrace of right-wing pro-Israel orthodoxies and its perceived bigotry.

Trump at times has denounced anti-Semitism and the extreme right. But he’s also questioned the loyalties of this country’s Jewish voters, equivocated after a deadly neo-Nazi and white supremacist march in 2017, embraced unfounded conspiracy theories about billionaire philanthropist George Soros and deployed the term “globalist,” a word often used to accuse Jews of having no natural loyalties.

It didn’t help that one of the scheduled speakers, hours before her appearance, amplified an anti-Semitic screed on Twitter, or that another cheerfully admitted to likening abortion to the Holocaust — a comparison that Jewish groups have called a softer form of Holocaust denial. Or that a congressional nominee who has peddled anti-Semitic theories scored an invitation to Trump’s speech on Thursday night accepting the nomination.

Asked for comment, the Trump campaign referred the Jewish Telegraphic Agency to an interview given by communications director Tim Murtaugh on Wednesday morning to MSNBC.

“Anti-Semitism is foul and repulsive in all of its forms, and we denounce it fully,” Murtaugh said.

An MSNBC anchor had asked Murtaugh about a convention speaker, Mary Ann Mendoza, who posted the screed that included references to “The Protocols of the Elders of Zion,” a notorious forgery. The convention pulled her speech before it was broadcast.

Yet there were Jewish listeners who inferred similar if less blatant tropes throughout the convention.

At least twice on the first night, “elites” was modified by adjectives that raised Jewish eyebrows. Kimberly Guilfoyle, the girlfriend of the president’s son, Donald Jr., referred to “cosmopolitan elites” and Sen. Tim Scott of South Carolina coupled “Manhattan elites” with “Hollywood moguls.”

“That’s one of their solutions for the pandemic,” Scott said. “They want to take more money from your pocket and give it to Manhattan elites, and Hollywood moguls, so they get a tax break.”

Jason Stanley, a Jewish professor of the philosophy of language at Yale University, was among many who criticized Scott’s comments.

“I am disgusted by the basically open anti-Semitism of Senator Tim Scott’s speech,” Stanley said on Twitter. “He said Biden wanted to enrich ‘Manhattan elites and Hollywood moguls’ (dog whistles for Jews) and that this was part of a plan for ‘a cultural revolution’ to bring about ‘socialist utopia.’”

Scott has close ties with Jewish groups; he was one the authors last year of a bill, the Anti-Semitism Awareness Act, that earned plaudits from the Anti-Defamation League. His first years in Washington he made time for bible study with an Orthodox Jewish aide, Nick Muzin.

Guilfoyle, whose decibel level got much more media attention, placed “cosmopolitan elites” on the wrong side of the battle for the “soul of America.”

“We stand for our flag,” she said. “This election is a battle for the soul of America. Your choice is clear. Do you support that cancel culture that cosmopolitan elites of Nancy Pelosi, Chuck Schumer and Joe Biden, who blame America first?” (Schumer, the Senate minority leader, is Jewish; Biden and Pelosi, the House speaker, are not.)

Alexander Nazaryan, a national correspondent for Yahoo! News, who is Jewish and whose family emigrated from the former Soviet Union, heard an unpleasant echo.

“Kim Guilfoyle rails against ‘cosmopolitan elites,’ which is suspiciously close to Soviet ‘rootless cosmopolitans,’ i.e., Jews,” he said on Twitter.

Last year, Sen. Josh Hawley, a Missouri Republican, became embroiled in controversy for invoking “cosmopolitan elites.” His critics noted the Soviet-era associations, while Hawley’s defenders said the term was commonplace. The Anti-Defamation League said the term was not necessarily anti-Semitic but called on Hawley to exercise greater care in the future.

“Our president refuses to surrender his beliefs to score points with the big political elite,” Ivanka Trump said on Thursday, introducing her father. “To my father, you are the elite.”

For years, Republicans have derided “coastal elites” and extolled mythical simple working men and women who occupy the country’s center, to the extent that HBO is set to launch its first pandemic-era production, “Coastal Elites.”  The title appears to be an ironic reference to the Republican insult; the production team and cast are packed with Jews, including Paul Rudnick and Bette Midler, who found herself facing criticism this week after she mocked Melania Trump’s accent.

Trump during the 2016 campaign was faulted for using the term, “America First,” which echoes the anti-Semitic movement led by Charles Lindbergh during World War II. The Anti-Defamation League asked him to drop the term; he ignored them and others and used it again in his acceptance speech Thursday night.

“Together, we have ended the rule of the failed political class – and they are desperate to get their power back by any means necessary,” he said. “They are angry at me because instead of putting them first I put America first!”

In some cases the speakers themselves were problematic. There was Mendoza, the mother of a hit-and-run victim who on the day of her speech urged Twitter followers to read a thread from an anti-Semitic conspiracy theorist. The convention uninvited her.

There was Abby Johnson, an anti-abortion activist who in 2017 said on Twitter, “I have a hard time understanding how people can’t see the connection between abortion and the Jewish holocaust.”(“Yes I am!” she said on Twitter on the day of the speech in response to Russel Neiss, a Jewish activist who drew attention to her earlier tweet and said “This woman is speaking at the Republican Convention tonight.” She blew him an emoji kiss.) Groups combating anti-Semitism call promiscuous Holocaust comparisons “soft denial,” arguing that they diminish the significance of the Holocaust.

Then there was the invitation to Marjorie Taylor Greene, who won a primary in a heavily Republican Georgia district, to attend Trump’s acceptance speech, to be broadcast from the White House. Greene has long subscribed to QAnon, the conspiracy cult that traffics in anti-Semitic tropes, although she insists she has quit the habit.

Murtaugh, pressed on the Greene invitation in the MSNBC interview, seemed to suggest that anti-Semitism needed to be obvious to be called out.

“We hear from the media all the time about this QAnon business, and we have a lot of things we work on in the campaign, and chasing down conspiracy theories is not one of them,” he said. “Anti-Semitism is something that is clear and everyone understands.”

He pivoted to the Democrats, noting that the Palestinian-American activist Linda Sarsour, whom he called an “anti-Semite,” spoke at a forum for Muslim voters at the Democratic conference last week. (The campaign of Democratic presidential nominee Joe Biden denounced Sarsour, then appeared to walk back the denunciation before apparently walking back the walk-back.)

“They gave her a slot at the DNC, and we reacted in real time during the day,” Murtaugh said.

Mendoza’s anti-Semitism has long been in evidence, and Greene has trafficked in precisely the same tropes that have gotten Sarsour into trouble, insinuating that Jews hold to a supremacist worldview.

When it comes to Israel, there was less to parse: The convention clearly made the case that Republicans love Israel with mentions of Trump’s moving of the embassy to Jerusalem by Trump and his daughter on Thursday, Pence on Wednesday, Secretary of State Mike Pompeo  (with a Jerusalem backdrop) on Tuesday and former ambassador to the United Nations Nikki Haley on Monday.

“Unlike many presidents before me, I kept my promise, recognized Israel’s true capital, and moved our embassy to Jerusalem,” Trump said.

Speakers hailed Trump’s decision to pull out of what they view as the deeply flawed Iran nuclear deal, negotiated by the Obama administration and adamantly opposed by Israel.

On Wednesday night,  Pence cheered Trump’s ordering of the assassination of Qasem Soleimani, the leader of Iran’s Islamic Revolutionary Guard Corps — believed to be behind the killing of hundreds of U.S. troops in Iraq and attacks on Israel and other American allies across the region. Pence contrasted Trump’s decision to take out Soleimani with Biden’s public skepticism of the move.

The crowd Thursday night gave a standing ovation when White House adviser Ivanka Trump celebrated her father’s success in setting up the launch of a normalization process between Israel and the United Arab Emirates.

Israel even cropped up as an addendum to Trump’s pledges to make Maine lobster great again.

“He keeps his word, like eliminating the European tariffs and moving the U.S. Embassy from Tel Aviv to Jerusalem,” Jason Joyce, lobsterman, told Republicans on Tuesday.