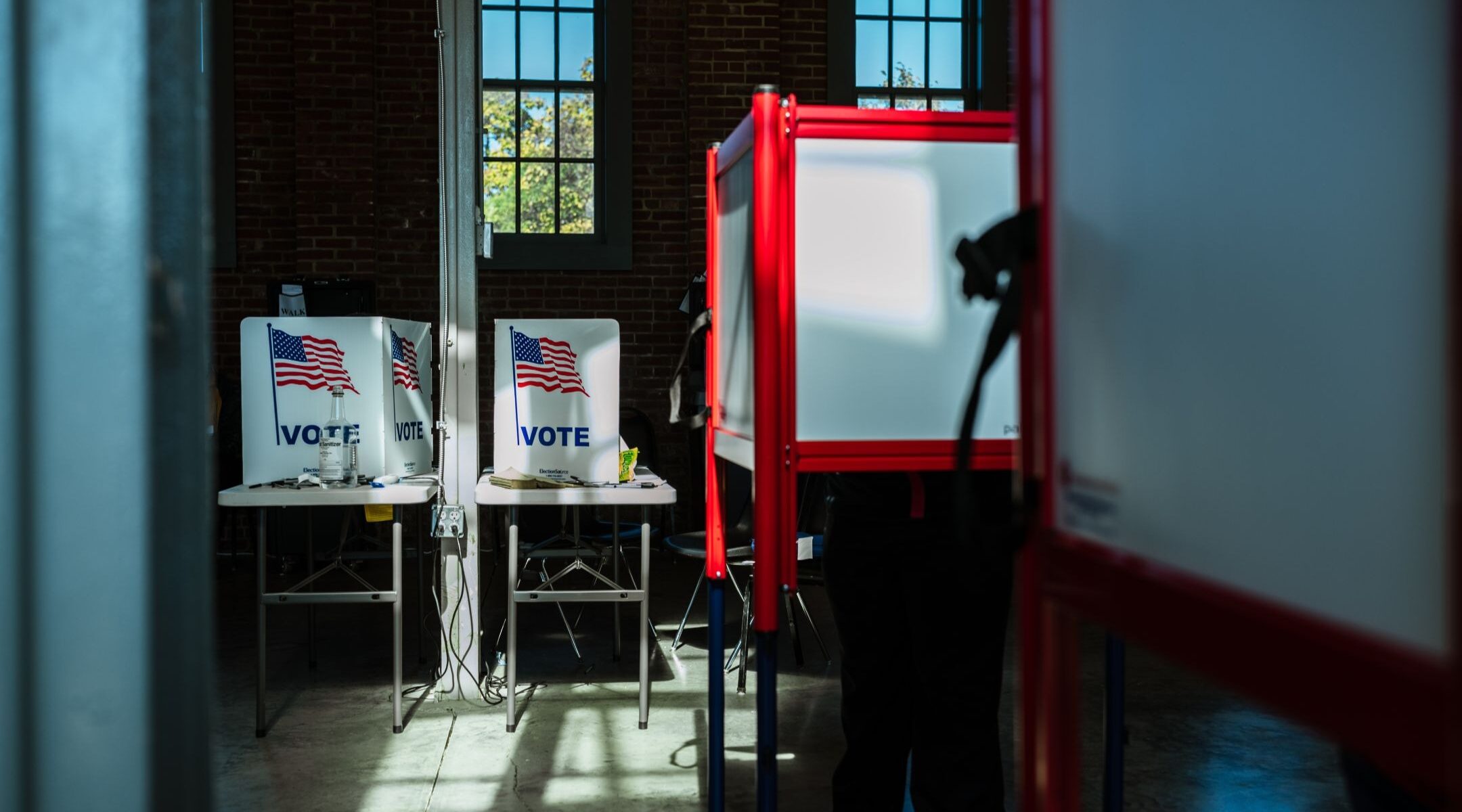 A person casts their ballot while early voting at the Kentucky Center for African American Heritage in Louisville, Kentucky on October 13, 2020. (Jon Cherry/Getty Images)
Advertisement

(JTA) — If you’re in Arizona or Florida and a 585 area code pops up on your phone, you might want to answer: It could be a Jewish volunteer in Rochester, New York, whose mission it is to help you vote.

The Greater Rochester Jewish Federation is one of a number of local and national Jewish organizations endeavoring to make sure eligible voters — Jewish and not — get to the polls.

The organizations are for the most part tax-exempt and by necessity nonpartisan, but the virtual thumbtacks on their maps coincide with battlegrounds where Democrats have pushed back against what they say are Republican efforts to diminish minority turnout.

“The goal is really to register disenfranchised voters, specifically minority communities where access to proper information on voting access, to voter education, all the stuff that you need to be informed, and really to vote in general is really at an all-time low,” said Sarah Walters, the federation’s community relations director.

Volunteers are trained to explain how to safely mail in votes, where President Donald Trump and his associates have sowed distrust in the method through false claims of fraud. They are suing to expand early voting opportunities where Republicans are shutting them down. Where Trump is asking acolytes to watch polls, Jewish groups are training volunteers to de-escalate confrontation at polls. Where Trump says he wants the election called Nov. 3, Jewish organizations are telling voters that a wait is likely because of the coronavirus pandemic.

“We’re committed to the protection of people and the right to vote,” said Melanie Roth Gorelick, JCPA’s vice president. “But it’s a fine line to walk this year because of the extreme partisan nature of the landscape.”

Here are some of the protective measures Jewish groups are taking ahead of Election Day.

Republican-led states have in recent years removed from the rolls voters who have not voted for several successive elections. Democrats and voting rights activists say that because turnout is traditionally lower among minorities and people living in poverty, the action amounts to disenfranchisement.

National and local Jewish organizations are partnering with voting rights groups to tell voters in states who may have been stricken off the rolls how to get back on.

The Rochester federation partnered with Reclaim the Vote, a project of Center for Common Ground, a voting rights group. (The Reform movement also has partnered with Reclaim the Vote.) Walters said that 150 Jewish volunteers in her city have trained so far to reach deregistered voters in Alabama, Arizona, Florida, Georgia, Mississippi, North Carolina, South Carolina and Texas.

“You’ve got a script right in front of you that is county-specific and person-specific with all the information they need to figure out if they’re registered,” Walters said. “If they believe that they are registered — in many cases people have registered before but have been removed from voter rolls for not voting enough — you’re making sure that they know how to check that and if they aren’t registered, you’re making sure they have the resources they need to find out that they’re eligible to register.”

“It erodes the possibility of the attempts to either delegitimize” the election “or targeted suppression,” Pesner said. “If there is an overwhelming turnout of lower-income communities and communities of color, then that will mitigate against a lot of what will be attempts at voter suppression, like if you close polling places.” 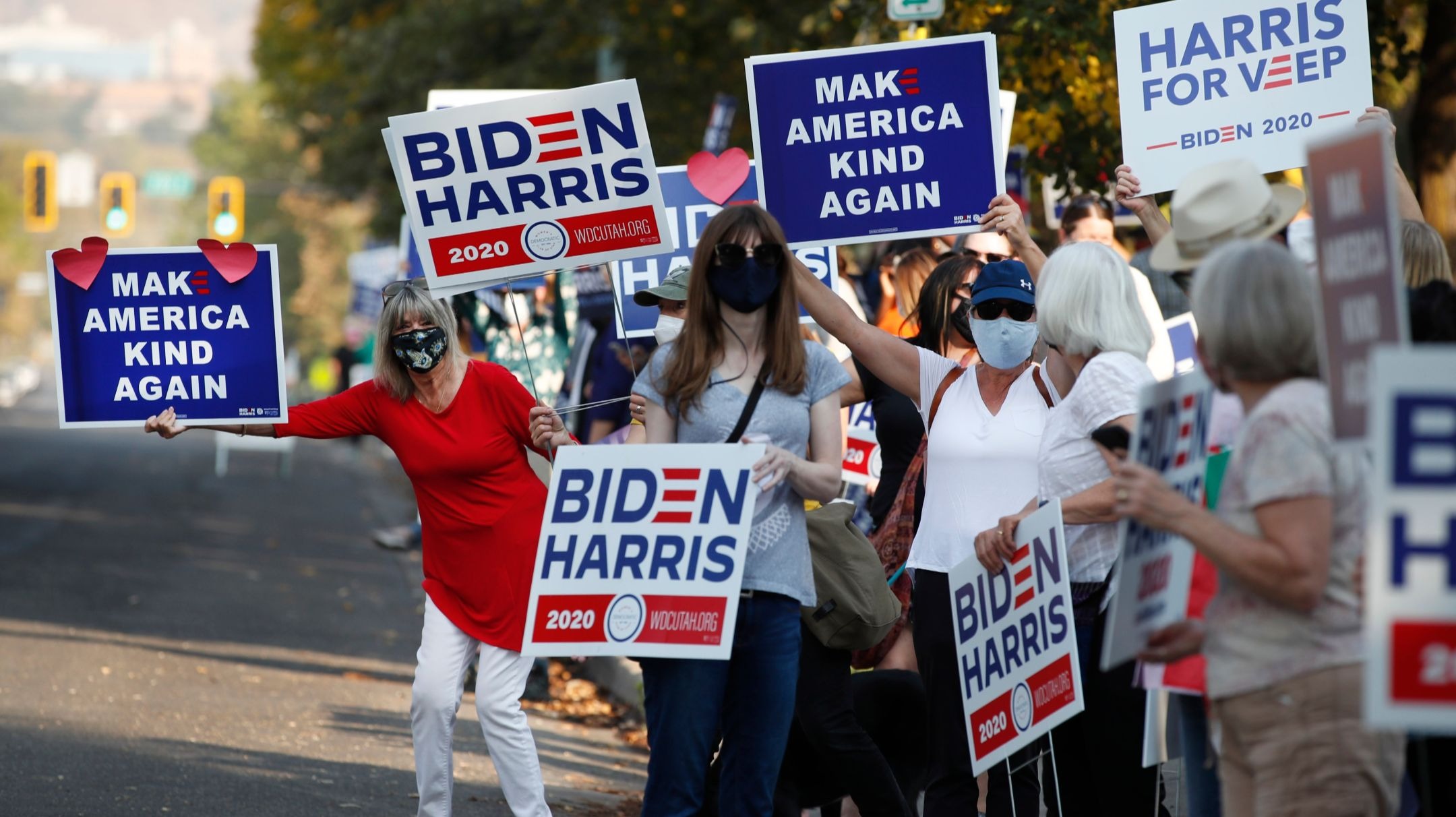 Supporters Democratic Presidential candidate and former US Vice President Joe Biden show their support before the vice presidential debate outside Kingsbury Hall at the University of Utah in Salt Lake City, Utah on October 7, 2020. (George Frey AFP via Getty Images)

The pandemic means door-knocking is not the option it was in past elections, so Reform volunteers have used electronic means to reach voters, through texting and apps. “We had originally set as our goal 250,000 voter engagements,” Pesner said. “We’ve engaged 350,000 and we’re on track to get to half a million by Election Day.”

The outreach is strategic, Pesner said, citing as an example the RAC chapter in Chicago. Illinois, solidly Democratic, does not pose a disenfranchisement threat, so the local Reform Jewish activists consulted with longtime allies in Black churches. They joined efforts to reach voters in neighboring Wisconsin, which is a critical swing state, and where Republican legislators have sought to inhibit mail-in voting and have limited polling places.

“Knowing that there would be attacks on enfranchisement in the inner city of Milwaukee in particular, this kind of interesting intersectional effort was born between the relationships that pre-existed in Chicago,” he said.

Bringing out the lawyers

Pesner’s RAC is also recruiting lawyers to join a project run by the Lawyers Committee for Civil Rights Under Law to be on call until Election Day to report attempts at voter suppression.

“The hotline has already become almost overwhelmed with calls,” said Pesner. “And obviously the Reform community is uniquely positioned to deliver lawyers.”

Sheila Katz, who directs the National Council of Jewish Women, is also recruiting lawyers and others to watch polls.

“We’re working to get people to polling locations that have a particular level of expertise and training to be able to advise people on their rights,” she said. “Lawyers are definitely highly preferred as people we want on the ground. But we have training that will be available to any person who wants to make sure that they’re available to be able to let people know what their rights are.”

Lawyers for the Anti-Defamation League have joined an effort led by Common Cause in Texas to overturn an order by Gov. Greg Abbott to limit ballot drops to one station per county. “Limiting the number of drop-off sites available to absentee voters reduces the options Texans have to participate in the 2020 election without risking their health,” Cheryl Drazin, the vice president of ADL’s central division, said in a statement.

The Lippman Kanfer Foundation for Living Torah is encouraging Jewish organizations to let staffers take Election Day off to volunteer as poll workers, and providing training for deescalation should they encounter attempts to disrupt voting. It launched its program, called Free and Fair: Our Duty to Democracy, on Tuesday.

Aaron Dorfman, the foundation’s president, said it was working with Over Zero, a group that combats “identity-based violence.” The training involves connecting volunteers from faith communities and establishing lines of communication if there is a threat, which is increasingly understood as a potential outcome during this election.

“If there are instances of violence on around Election Day they’re prepared to connect with local law enforcement of elected officials and other faith leaders,” he said. “They can think and strategize together and respond collectively.”

The Jewish federation in Buffalo, New York, is getting volunteers to write postcards to the voters in the states designated by the Reclaim our Vote project, which cites studies that have found that handwritten appeals on the back of colorful postcards spur 25% of recipients to reregister.

“Every county has specific texts that you’re allowed to use and they handwrite postcards, and they’re given an address to send,” said Mara Koven-Gelman, the federation’s community relations director.

Deborah Cohen, a retired psychiatric nurse who is a congregant at Buffalo’s Congregation Shir Shalom, initiated the postcard writing, drawing in 50 of her fellow congregants. Koven-Gelman said the effort has spread throughout the community and has reached “students and grandparents, people trying to make a difference.”

Hillel, the international organization that works with college students and young adults, has revamped its MitzVote campaign for the pandemic era, launching a website that helps students homebound by the pandemic figure out how and where to register to vote.

Two years ago, “West Wing” star and Jewish Twitter celebrity Josh Malina starred in a MitzVote get-out-the-vote video. This year, he’s joined by several other prominent (but youth-oriented) Jews in promoting MitzVote’s “Schmear Campaign,” which aims to convince college-aged voters that casting a ballot during the pandemic is as easy as toasting a bagel.

To join the #SchmearCampaign, and make sure your voter registration info is up-to-date, visit https://t.co/IVjsZgRksN. pic.twitter.com/zkuKMvbDMw

Hillel is not alone in targeting college students, who may face unique challenges in being able to vote because many are not living where they expected. Pesner said students in the Reform movement are amping up the student-to-student texting network they established after the mass shooting at a high school in Parkland, Florida in 2018.

“We’ve got this massive text to text campaign of students holding their peers accountable,” he said.

At the same time, Jewish groups are giving special attention to elderly voters, as well, who may also face unique obstacles in casting their ballots.

“I’m especially concerned that Jews who are sitting at home, who plan on voting, don’t become intimidated because they think there’s going to be rowdy people at the polling sites, that it makes them stay home,” said Ronald Halber, who directs Greater Washington’s Jewish Community Relations Council.

Getting out the party vote

Not all of this year’s election efforts are about safeguarding the vote. Partisan Jewish organizations are doing what they do every cycle: focusing on getting the vote out, especially in swing states where the margin between the winner and loser is likely to be narrow and Jewish voters could potentially influence the result.

As the contours of the election have become clearer, Democrats are laboring in more states than Republicans.

Matt Brooks, the Republican Jewish Coalition director, said his organization had reached over 410,000 “likely Trump and persuadable” voters in Florida, Pennsylvania, Ohio, Arizona, Georgia and Michigan, all swing states where Jewish voters could make a difference. 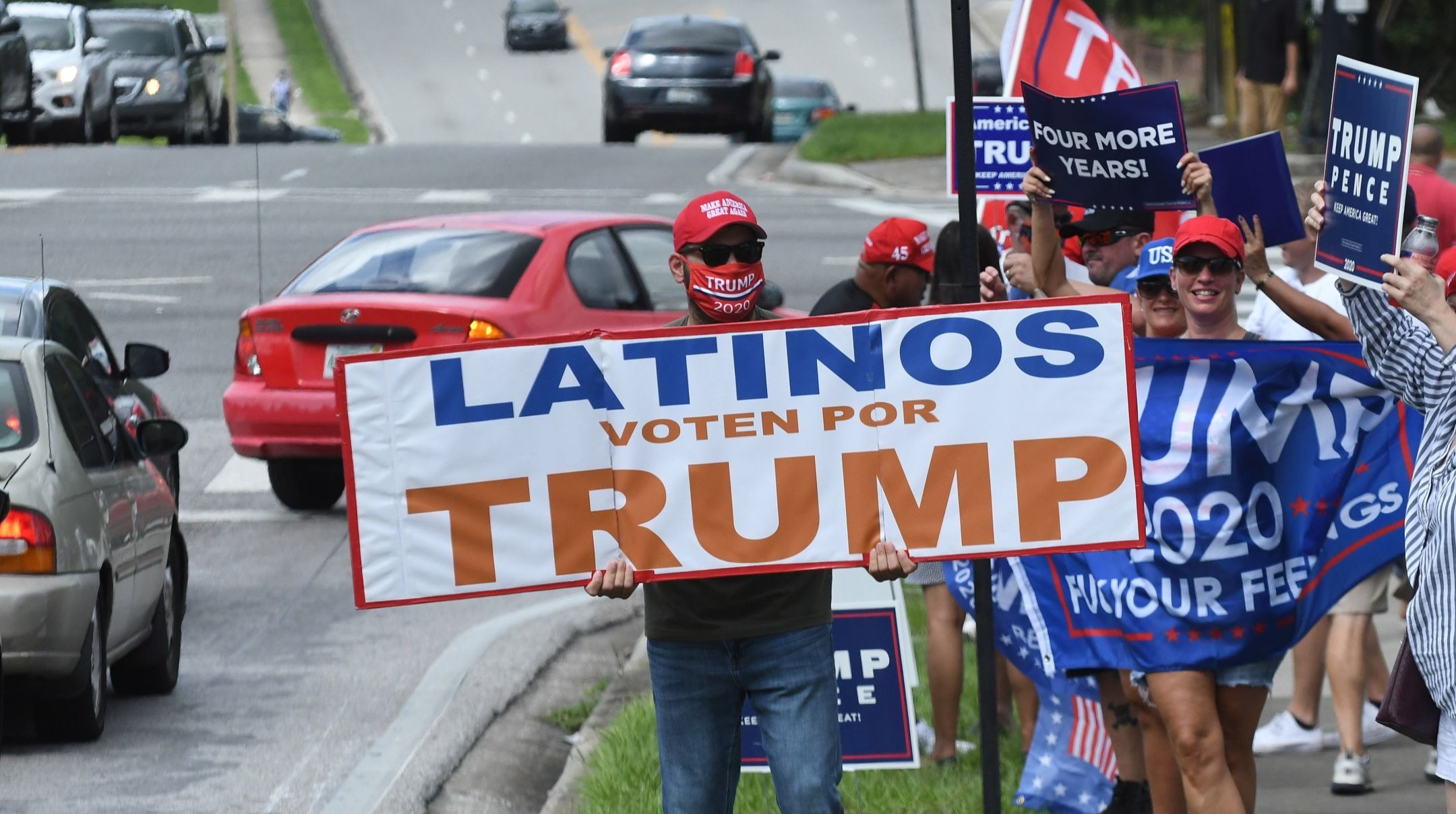 Bend the Arc, the Jewish social justice movement that has endorsed Joe Biden and other Democrats, has exceeded its target of reaching 250,000 Jewish voters and is now extending its phone and text campaign to non-Jews in swing states, reaching 725,000 so far, said CEO Stosh Cotler. The targeted states include Georgia, Florida, Arizona, Colorado, Michigan, Minnesota, Ohio and Pennsylvania, and the hope is to reach 1.5 million voters by Election Day.

“We have moved into really targeting moderate voters in swing states who we believe Jews are very good messengers to reach,” Cotler said.

Another target for Bend the Arc are left-wing Jews disillusioned by Vermont Sen. Bernie Sanders’ loss in the primaries to Biden. “There are a set of Jewish voters who are way more progressive than the Biden-Harris ticket is, and we were concerned that those voters would potentially sit this race out,” she said.

Efforts to ensure a smooth Election Day and weeks leading up to it may not be enough to safeguard this year’s vote. Jewish groups will join public information campaigns counseling patience in the face of Trump’s stated intention to see the vote as done on the evening of Nov. 3. (Prognosticators have suggested that the count might initially favor Trump and then swing to Biden once mail-in votes are counted.)

“We know that many of the votes won’t be counted on Nov. 3, and perhaps a decision will not be made and we need people to be patient, to let the process happen, we want people to be peaceful,” said Melanie Roth Gorelick, senior vice president at the Jewish Council for Public Affairs.