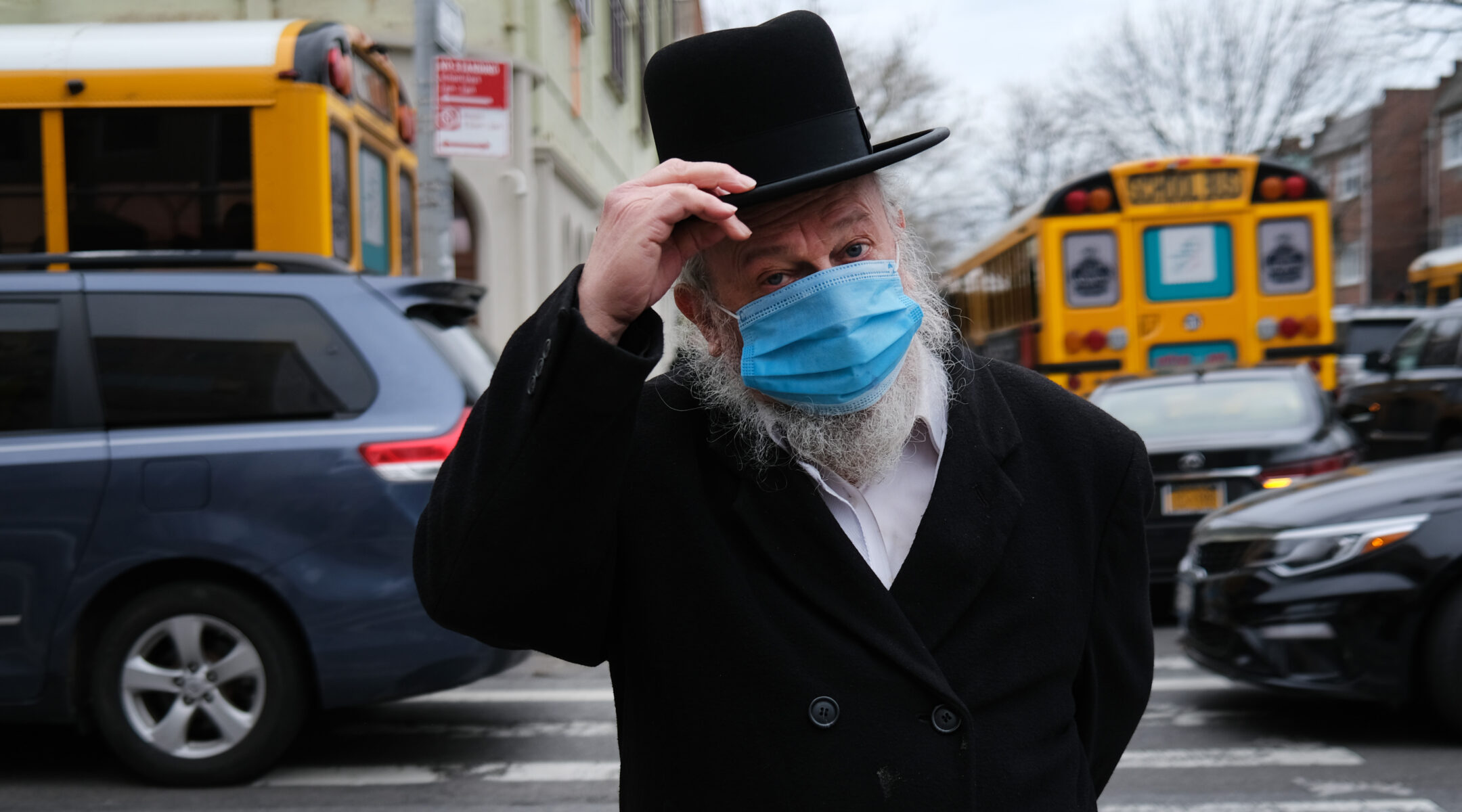 A member of the Orthodox Jewish community in Brooklyn. (Spencer Platt/Getty Images)
Advertisement

(JTA) — For so many American Jews, the recent clashes between Governor Cuomo and the New York ultra-Orthodox Jewish community over new COVID-19 restrictions (and protests of them) are nothing short of a dangerous embarrassment.

It is thus unsurprising that the broader Jewish public largely viewed the raging and rioting against new restrictions as undermining collective Jewish values and credibility in deeply corrosive ways. But the disparate impact of these new restrictions on ultra-Orthodox communities — combined with Governor Cuomo and Mayor De Blasio’s repeated references to noncompliance within those communities — has provoked both growing distrust of the state and, in turn, legal challenge to its new regulations. The impacted communities see these new public health orders as unfairly targeting Jews and thereby suppressing their religious freedom.

The strategy to address both the growing trust deficit and the ongoing legal challenges is the same. The state must be far more transparent and clear in how it uses numbers and not politics to identify which neighborhoods are being subjected to increased regulation.

Round one of legal challenges to the new restrictions began last week, when the Agudath Israel filed a federal lawsuit, attempting to stave off synagogue closures in advance of the impending Jewish holidays. The lawsuit, thus far, has not garnered much sympathy. Indeed, Judge Matsumoto, in rejecting the claims of religious discrimination alleged by Agudath Israel, concluded unequivocally that the “balance of equities and the public interest weigh strongly in favor of New York’s mission to protect its citizens from this global pandemic which continues to be of great concern.” The stakes, according to the judge, were simply too great to afford any leeway to houses of worship.

Although the case is still ongoing, the fanfare has largely subsided. Maybe this is as it should be: In the wake of the federal court’s ruling, Jewish leaders have focused efforts on educating and rebuking the impacted communities, reiterating the importance of compliance with health and safety guidelines.

But like many legal cases, examining the details matters. Governor Cuomo’s executive order — the so-called “Cluster Action Initiative” — seeks to address “hot spots” by identifying areas where there has been an uptick in COVID-19 cases and then imposing greater restrictions to stem the spread of the virus.

The majority of these hot spots encompass predominantly ultra-Orthodox Jewish communities — and imposing restrictions on those communities based upon scientific metrics is certainly not anti-Semitic. Indeed, the state has clearly communicated its commitment that decisions must employ a “science-based approach … to stop any further spread of the virus.”

But while the principle is sound, criticism — and legal challenge — has almost exclusively been based on the manner in which Cuomo identified the hot spots.

In an opinion denying the Brooklyn diocese constitutional challenge to the new restrictions, federal judge Eric Komtee concluded that “the Governor of New York made remarkably clear that this Order was intended to target a different set of religious institutions,” referencing Cuomo’s CNN interview where he stated “the cluster is a predominantly ultra-Orthodox [Hasidic] community. . . . . the issue is with that ultra Orthodox community.” By contrast, Judge Matsumoto concluded that Cuomo’s statements were “taken selectively out of context,” and did not evidence any form of prohibited discrimination against the Jewish community.

Parsing out Cuomo’s intent may be an impossible task, although his continuing call-outs of religious Jews specifically certainly provides fodder for trying. One can certainly imagine, given the public health stakes, granting him the benefit of the doubt. But maybe more curious than his word choice is the relative opacity of the actual new restrictions — an opacity runs counter to the state’s commitment to making decisions based upon public health metrics.

Cuomo’s executive order is quite clear that “red zones,” “orange zones” and “yellow zones” will be subject to heightened restrictions, including significant limitations on houses of worship. But the executive order is silent on how the state identifies which neighborhoods fall into these color-coded categories.

Early last week, it sounded like Cuomo planned to impose the new restrictions on zip codes with the highest positivity rates. But as the week progressed, Cuomo made it clear that clusters would be drawn “not by zip code, not by census tract … it’s only by the numbers.”

The problem is that the state has not made clear exactly what that means. What benchmark metrics — that is, what numbers — over what geographic area constitutes a cluster subject to the new regulations?

Consider, as a contrast, California’s current regulations. In California, counties are placed in a color-coded tier based upon an adjusted case rate and positivity rate. The state is quite clear what benchmarks a county needs to hit before the state will loosen COVID-19 health restrictions. New York, however, has not provided analogous rules in its official documents or statements; they do not appear in Cuomo’s executive order, nor in the state’s briefing in federal court. This failure certainly makes it hard to determine whether the state is applying the same restrictions to other neighborhoods that it is applying to predominantly ultra-Orthodox Jewish neighborhoods.

Failure to apply these same restrictions to all neighborhoods with comparable positivity rates — to engage in something akin to religious gerrymandering — would raise serious concerns as to whether the state is singling out particular Jewish communities for discriminatory treatment.

The state’s lack of clear metrics is not evidence that the state has targeted Jewish communities. But if the state is going to be successful in its attempt to convince the impacted Jewish communities that they are getting a fair shake — that decisions are being made based on numbers and not politics — then it has to do a better job explaining what those numbers are and how its “science-based” decision-making works.

Ultimately, these new restrictions do not exist in a vacuum. They come on the heels of a summer where Mayor de Blasio unnecessarily politicized COVID-19 restrictions. As I’ve expressed previously, in choosing to justify the disparate treatment of racial justice protests and houses of worship on political grounds — and not on far more reasonable public health grounds — De Blasio cemented in the minds of many faith communities that ongoing COVID-19 regulations were not just about health and safety. Those missteps have already served as grounds for a federal court to strike down some of New York’s public health guidelines — a consequence that puts all New Yorkers at risk.

Undoing the damage of these early missteps will require the state to go above and beyond when it formulates new restrictions, especially those that disparately disadvantage religious communities. There is no room any more for ambiguity. Ambiguity only feeds into a festering narrative of distrust. Indeed, if the state is unable to convince faith communities that its restrictions are intended to protect them instead of punish them, it is hard to see how it will be successful in securing compliance.