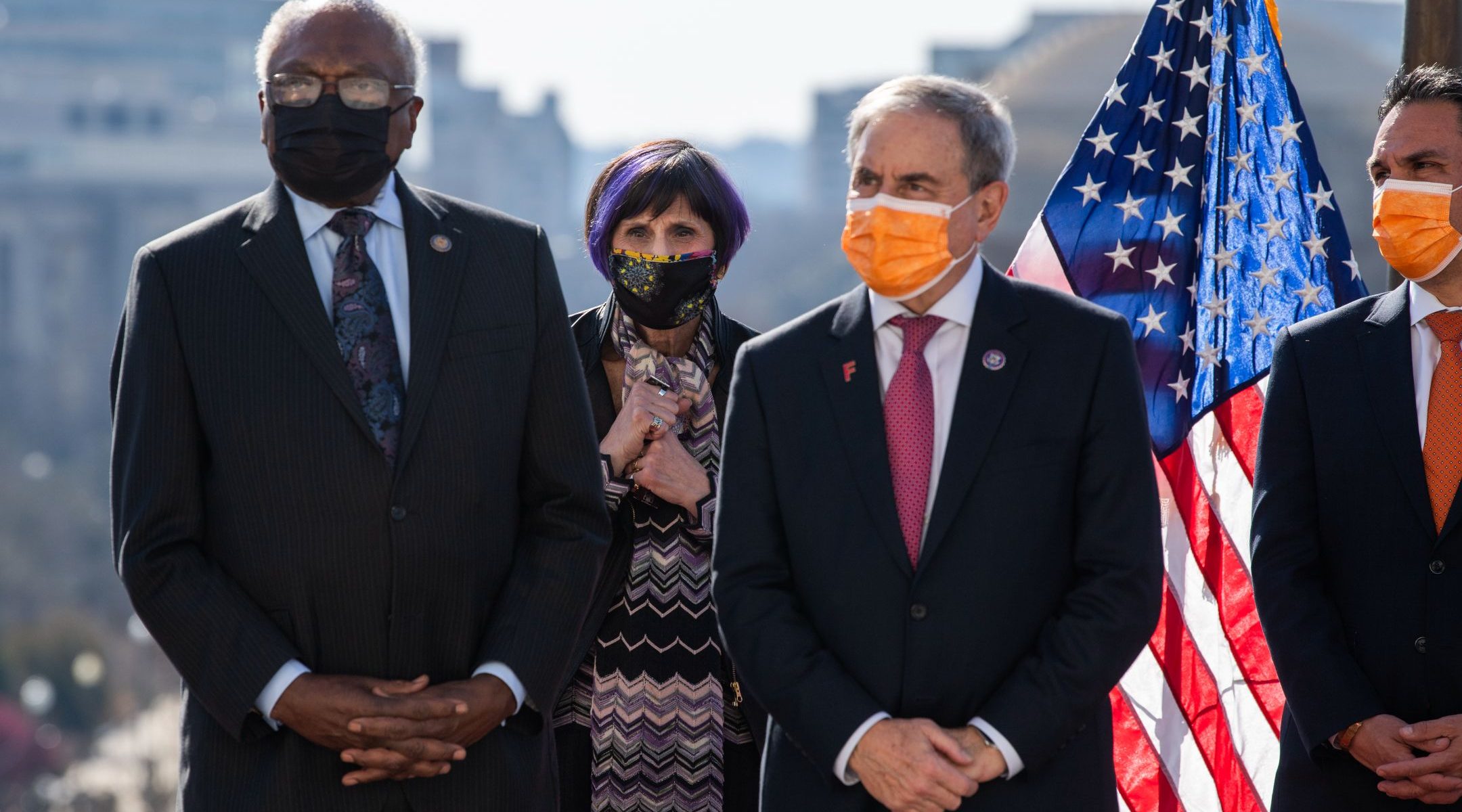 WASHINGTON (JTA) — A letter from 73 Democrats in the U.S. House of Representatives, including a number in leadership positions, urges President Joe Biden to make a number of moves to reverse what they call the Trump administration’s “abandonment of longstanding, bipartisan United States policy” on Israeli-Palestinian relations.

Among other things, the letter sent Wednesday calls for Biden to firmly consider Israeli settlements illegal and the West Bank occupied, two things the Trump administration stated that it would no longer do.

“Make clear that the United States considers settlements to be inconsistent with international law by reissuing relevant State Department and U.S. customs guidance to that effect,” the letter states.

It also pushes for all “relevant official U.S. documents and communications” to “once again consistently refer to the status of the West Bank and Gaza Strip as occupied.”

The letter’s signatories include seven committee chairs, among them Reps. Rosa DeLauro, D-Conn., who leads the powerful Appropriations Committee and John Yarmuth, D-Ky., who heads the Budget Committee, as well as the assistant Speaker of the House, Rep. Katherine Clarke of Massachusetts.

Seven Jewish Democrats signed the letter, including Rep. Jan Schakowsky, D-Ill., who initiated it. The others are Reps. Alan Lowenthal of California, Andy Levin of Michigan, Sara Jacobs of California, Yarmuth, Steve Cohen, of Tennessee and Jamie Raskin of Maryland.

Donald Trump upended decades of U.S. policy in the region by recognizing the right of Israel to annex parts of the West Bank, in addition to agreeing to Israel’s claim to the Golan Heights and moving the U.S. embassy to Jerusalem.

Biden officials have been reluctant to openly criticize Israel, wary of the tensions that beset the Obama administration when its officials publicly called out Israel over differences on policy. Biden has preferred to keep differences with Israel behind closed doors. During last month’s conflict, he robustly rejected calls from the party’s left to leverage assistance to Israel to pressure it to end the conflict.

In a vague but signifiant line, the letter calls for Biden to “consistently” condemn in public statements any “specific actions that violate the rights of either party or undermine the prospects for peace.” Open airing of differences is a practice Israeli leaders and the mainstream pro-Israel community adamantly rejects.

But Biden favors some of the eight specific recommendations in the letter, including a resumption of sending aid to the Palestinians and reopening a separate consulate in Jerusalem for Palestinian relations.

The letter also calls on Biden to abandon Trump’s peace plan, which envisioned an Israeli annexation of portions of the West Bank. It additionally urges him to pressure Israel to stop the planned eviction of Palestinian families from eastern Jerusalem, which contributed to the volatile environment that spurred last month’s violent conflict between Israel and Gaza.

The document reflects growing calls among Democrats to take a tougher stance with Israel, mounting against Biden’s continued closeness to the state. J Street, the liberal Jewish Middle East policy group, praised the letter, noting that it came from a third of the House Democratic caucus. Jeremy Ben-Ami, J Street’s president, said in a statement it was “incumbent on the Biden administration to do everything in its power to rebuild productive ties with the Palestinian leadership and to make absolutely clear that the U.S. will not stand for illegal settlement expansion, de facto annexation and displacement.”

U.S. policy on whether the settlements are illegal according to international law has varied under different presidents. Presidents Richard Nixon, Gerald Ford and Jimmy Carter emphasized what they said was the settlements’ illegality, while Ronald Reagan said he did not believe the settlements were illegal. Subsequent administrations returned to regarding the settlements as illegal, but for the most part only when officials were pressed to make clear their position.

Notably, three Squad members did not sign: Reps. Rashida Tlaib of Michigan, Alexandria Ocasio-Cortez of New York and Cori Bush of Missouri. The letter emphasizes support for the two-state outcome, something that Tlaib rejects, favoring a binational state.