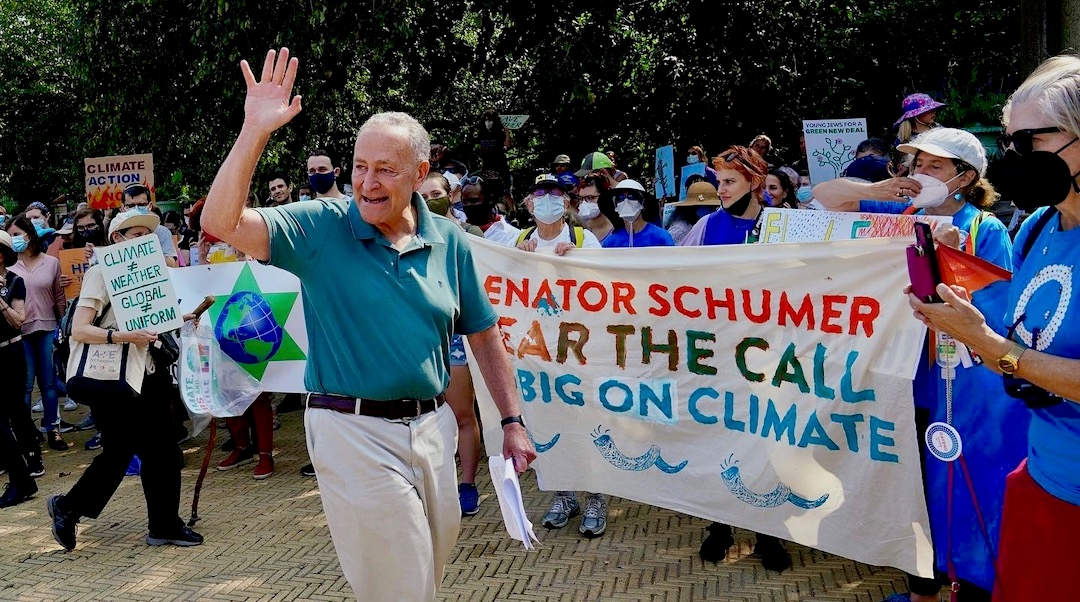 Good Monday morning, New York. Today is the first day of public school — with fully in-person learning for the first time since March of 2020. (Chalkbeat explains how we are doing it.) Today is also the first day of enforcement for the city’s vaccination mandate at restaurants, bars, movie theaters and other public accommodations.

REST IN PEACE: Justice Ruth Bader Ginsburg’s headstone, featuring the seal of the United States Supreme Court, was unveiled at Arlington National Cemetery. The Brooklyn-born associate justice and feminist icon died one year ago on the eve of Rosh Hashanah. (New York Post)

PEACE IN OUR TIME: The United Nations missions of Israel, the United Arab Emirates, Bahrain and Morocco will hold a joint celebration in New York today to mark the one-year anniversary of the Abraham Accords. (Jewish Insider)

HERRING AID: The Greenpoint Shul in Brooklyn announced that Acme Smoked Fish will be the “Official Sponsor” of the synagogue’s Yom Kippur break-the-fast; in May, the City Council approved a plan that would allow the appie company to remain in Greenpoint as part of a mixed-use development.

HOW SHE ROLLED: Take a peek inside the weird and wonderful 14-room Upper East Side apartment that belonged to Gail Ann Lowe Maidman, the granddaughter of a Hasidic rabbi whose family made a fortune marketing Bingo cards and the Yahtzee dice game. (Curbed)

SECOND THOUGHTS: Days after the terror attacks, The Jewish Week’s front page featured the headline, “America: The New Israel?” Two decades later, Gary Rosenblatt, the editor at the time, regrets that linkage, writing, “I realize just how misplaced my anger, sadness and fear were in my immediate response to the deadliest terror attack in U.S. history.” (JTA)

ON GUARD: The Sept. 11 attacks brought a new emphasis on physical security to Jewish institutions and changed how our institutions look, how Jewish groups spend their money and how rank-and-file Jews think about their place in the United States. (JTA)

WELCOMING THE STRANGER: The 9/11 musical “Come From Away” draws from both Jewish and Newfoundland traditions, according to the Canadian Jewish couple who wrote the show. A filmed version premiered Friday on Apple TV+, and the musical returns to Broadway Sept. 21. (JTA)

AROUND THE WORLD, WITH JTA

The American Jewish Committee reflects on the first anniversary of the Abraham Accords, with a webinar featuring Khalifa Shaheen Almarar, Minister of State of the UAE; Alon Ushpiz, Director-General of the Foreign Ministry of Israel; and Jason Isaacson, AJC Chief Policy and Political Affairs Officer. Register here. 10:00 a.m.

In a class with My Jewish Learning, Dr. Tamar Kamionkowski will explore the language of one of the central prayers of Yom Kippur, Shma Koleinu – Hear Our Voice. The session will lead to a better appreciation of both the prayer’s themes and its poetic features. Sign up here. Noon.

A central feature of Yom Kippur is the act of atonement, or “at-one-ment.” Rabbi Gordon Tucker, Vice Chancellor for Religious Life and Engagement at the Jewish Theological Seminary, will explore both the individual and collective aspects of this holy day, with special attention to Unetaneh Tokef, the Yom Kippur confession, and other liturgical features of the season. Register here. 2:00 p.m.

Photo, top: Jews from across New York gathered in Brooklyn’s Grand Army Plaza for a rally in support of “big, bold climate action,” organized by Dayenu and other Jewish groups, Sept. 12, 2021. Senate Majority Leader Senator Chuck Schumer vowed to press for legislation that would call for 80% clean energy by 2030 and an end to all subsidies for oil, gas, and coal. (Dayenu)