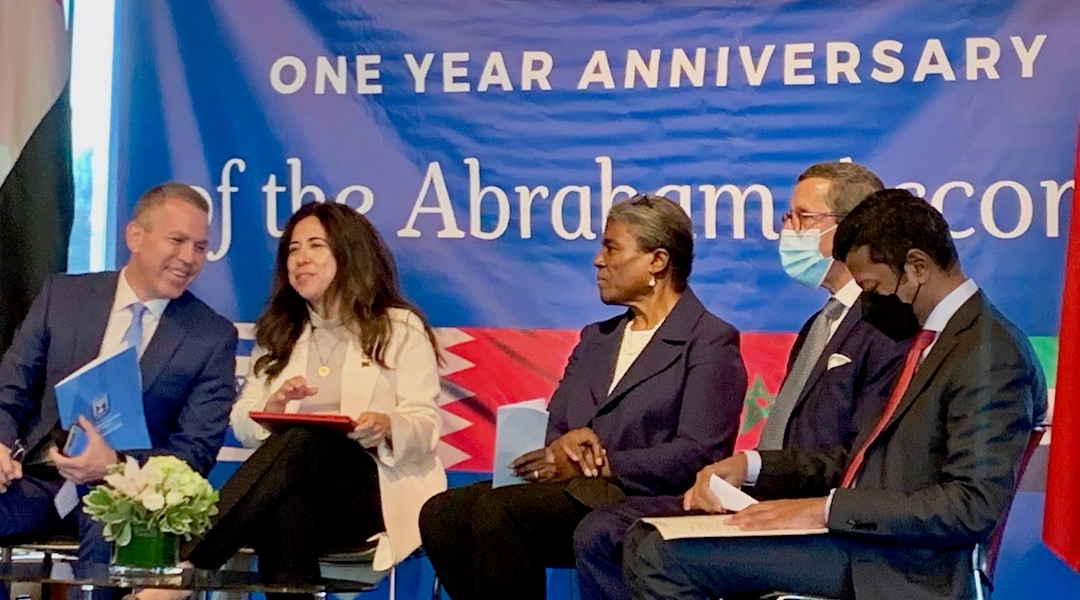 UN ambassadors Gilad Erdan of Israel, Lana Nusseibah of the UAE, Linda Thomas-Greenfield of the United States, Omar Hilale of Morocco and Jamal Al Rowaiei of Bahrain mark the one-year anniversary of the signing of the Abraham Accords at an event hosted by the Israeli Mission to the UN at Manhattan’s Museum of Jewish Heritage, Sept. 13, 2021. (@AustraliaUN)
Advertisement

Good morning, New York. If you or someone you know is looking for a virtual Yom Kippur experience, our colleagues at JTA have collected a non-exhaustive list of offerings arranged by the kind of experience you might be seeking.

NO VAX, NO SERVICE?: Days before NYC’s new vaccine mandates went into effect Monday, some kosher restaurants in New York City were still debating the consequences of complying — or not. (JTA)

FRONT AND CENTER: Rabbi Joanna Samuels was named as the next chief executive officer of the Marlene Meyerson JCC Manhattan.

NABBED: Police in upstate Sullivan County say they made an arrest after someone fired paintballs from a moving car at a Woodbourne synagogue on the second day of Rosh Hashanah. (midhudsonnews.com)

AROUND THE WORLD, WITH JTA

Art Metrano, a comedian and actor whose career rebounded after he was seriously injured in a fall from a ladder in 1989, died on Sept. 8 at his home in Florida. He was 84. Raised in Bensonhurst in a Sephardic Jewish family, Metrano appeared on “The Tonight Show” and starred in two “Police Academy” films. A son, Rabbi Howard Bald, performed the memorial service over the weekend. (New York Times)

Baruch Nachshon, an Israeli artist known for surreal, mystical works influenced by Hasidism, died Monday. He was 82. Nachshon’s career was kickstarted by the late Lubavitcher rebbe, Menachem Mendel Schneerson, who paid for a two-year scholarship for Nachshon to learn at NYC’s School of Visual Arts. (c0llive)

In her new book, “People Love Dead Jews,” Dara Horn explodes a recurring myth that Jewish names were changed at Ellis Island. In a Jewish Week essay, editor in chief Andrew Silow-Carroll recalls his own family’s name change, and what it says about Jewish survival and adaptability.

To mark the closing of Dana Arieli’s virtual exhibition, “The Zionist Phantom,” organized by Brandeis University’s Schusterman Center for Israel Studies, Adriana Katzew will present her photographic work inspired and driven by the history of her own Mexican-Jewish family. Arieli will then join the discussion to address some of the similarities and differences between their works. Register here. Noon.

Eleanor Bergstein was a teenage mambo queen whose family summers at Grossinger’s inspired her screenplay for “Dirty Dancing,” the 1987 film set in a Catskills resort in the summer of 1963. Bergstein will share stories from her life and behind-the-scenes anecdotes from the creation of the film and stage musical. Center for Jewish History; register here. 6:00 p.m.

Photo, top: UN ambassadors Gilad Erdan of Israel, Lana Nusseibah of the UAE, Linda Thomas-Greenfield of the United States, Omar Hilale of Morocco and Jamal Al Rowaiei of Bahrain mark the one-year anniversary of the signing of the Abraham Accords at an event hosted by the Israeli Mission to the UN at Manhattan’s Museum of Jewish Heritage, Sept. 13, 2021. (@AustraliaUN)