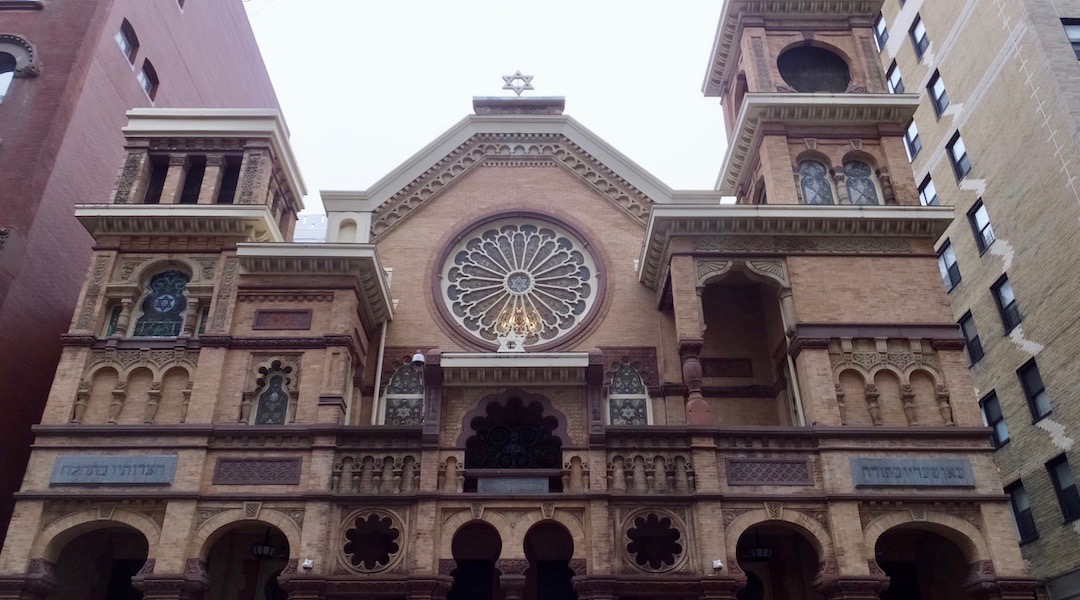 Park East Synagogue on the Upper East Side is in turmoil following the abrupt firing of its assistant rabbi. (Friscocali/Flickr Commons)
Advertisement

Good morning, New York. Lots of news today, including a Jewish Week/JTA exclusive about the firing of a rabbi at a venerable Manhattan synagogue.

PARTING WAYS: In what appears to be fallout from an internal dispute over “equity and anti-racism,” an Off-Broadway show about an undocumented Syrian immigrant will open without the Jewish actor who was slated to play the part. (Jewish Week via JTA)

FATHERHOOD: How did you spend the pandemic? CUNY professor Ari Nagel — a serial sperm donor dubbed “The Sperminator” — tells Esquire that he fathered 21 children in 2020 and expected another 30 babies in 2021, bringing to almost 100 the number of babies fathered with his contributions. (JTA)

OFF HIS PEDESTAL: Our colleague Shira Hanau has more on that Thomas Jefferson statue removed from New York City Council chambers — and the Jewish military officer who donated it in the 19th century. (JTA)

GOING, GOING…: Christie’s New York auctioned a 700-year-old Jewish prayerbook from Germany, offered for sale by a French Jewish organization to shore up its finances, for $8.3 million Tuesday. (JTA)

POVERTY WATCH: Brooklyn has the highest proportion of Jewish poverty in the New York metro area, with more than a quarter of borough Jews “poor or near poor,” according to a new UJA-Federation study. (Brooklyn Eagle)

PICK-UP ARTISTS: The Jewish Community Council of Greater Coney Island hustled up a crew to clean up trash on the Joseph P. Addabbo Bridge, which connects Howard Beach and Broad Channel in Queens. (QNS)

Rabbi Abram Goodstein of Anchorage, Alaska explains why he and his fellow “Frozen Chosen” stood up to local politicians and anti-mask activists who compared pandemic health ordinances to the Holocaust: “We are not an isolated shtetl, but rather working members of the Alaskan community.” (JTA)

Today is the second day of the Jewish Women’s Foundation of New York “Convening,” bringing together leaders in philanthropy, technology, the arts, journalism and politics for two mornings of conversation to amplify women’s voices. Go here for the speakers’ schedule and here to sign up for the virtual sessions. Tickets start at $36.

Meet the co-editors of “Pogroms: A Documentary History,” a new volume surveying the complex history of anti-Jewish violence. Elissa Bemporad (CUNY) and Eugene Avrutin (University of Illinois) will be in conversation with Darius Staliunas (Lithuanian Institute of History) and David Myers (UCLA) at this virtual Center for Jewish History event. Register here. 4:00 p.m.

Photo, top: Park East Synagogue on the Upper East Side is in turmoil following the abrupt firing of its assistant rabbi. (Friscocali/Flickr Commons)