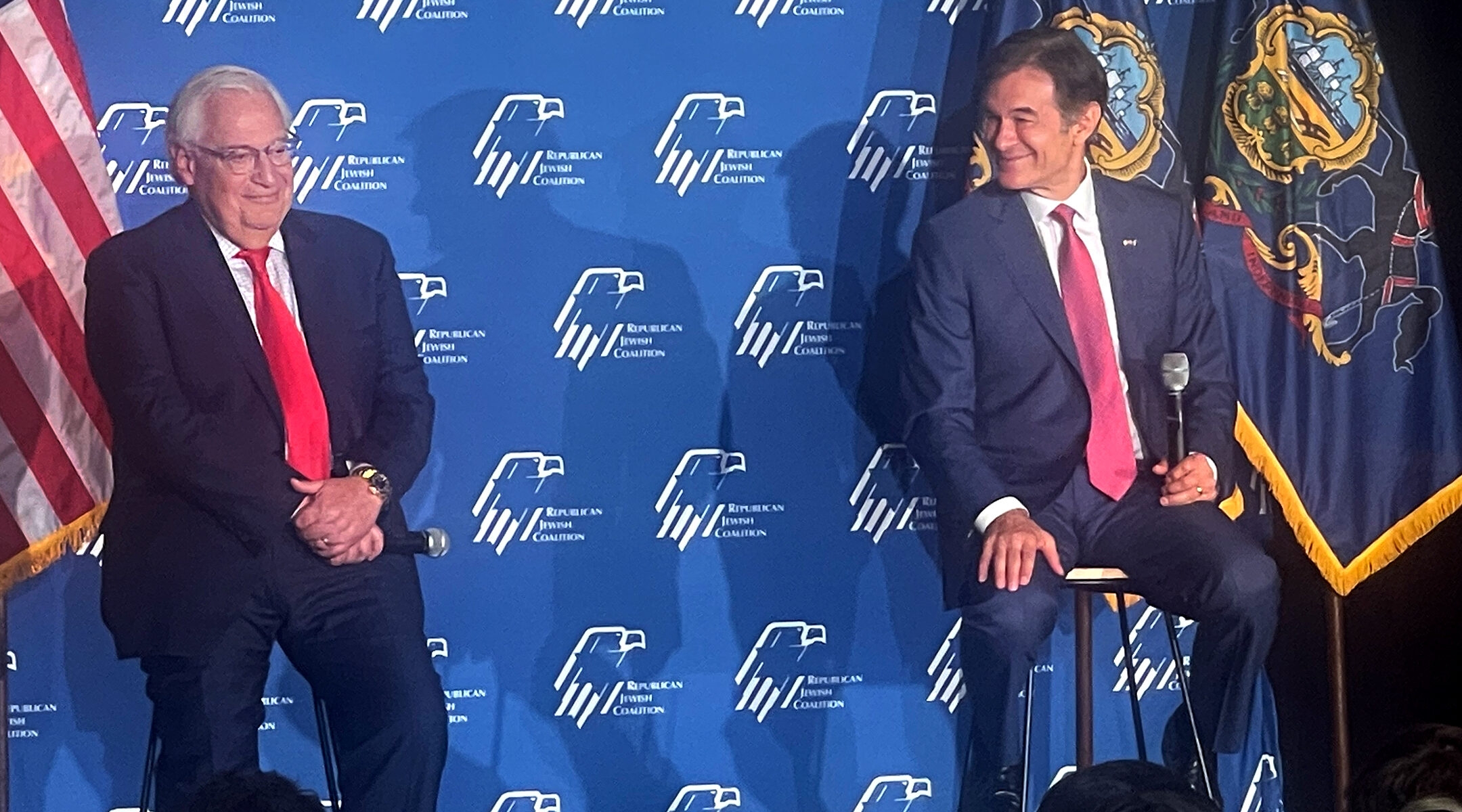 PHILADELPHIA (JTA) — When David Friedman, the Trump administration’s ambassador to Israel, was first asked to endorse Pennsylvania’s Republican candidate for Senate, Dr. Mehmet Oz, he said one thing stood out to him.

“I have to tell you, I was intrigued by the idea of a pro-Israel Muslim, a very pro-Israel Muslim,” Friedman told a crowd assembled Wednesday night in a hotel ballroom by the Republican Jewish Coalition. “In the old days that would probably be as common as a Philadelphia Eagles fan in Manhattan.”

Friedman was unveiling his endorsement at a pivotal time for Oz, who is badly lagging in the polls behind Pennsylvania’s lieutenant governor, John Fetterman, amid a series of gaffes that Fetterman has exploited.

In a symbol of the strange bedfellows that politics generally, and Israel politics specifically, can create, the event placed on the same dais an ideologue ardently committed to the Jewish claim to all of biblical Israel and a daytime TV celebrity who happens to be a Muslim.

The result was an hour-plus session of mutual admiration, of agreement on the country’s direction (dire) and of awkward efforts to identify common ground in the post-Trump Republican Party and its efforts to keep under its umbrella constituencies as diverse as the fans of a Muslim physician who dispenses new-agey health advice and hypernationalists who see an iteration of Islam as a deadly threat.

The mood was festive, with banners declaring, “Pro-Israel, pro-Oz!,” “Jews for Oz” and Oz’s name in Hebrew and English. Music mostly of an ’80s vision rocked the room as a happy crowd of folks old enough to remember the lyrics exchanged notes before the participants came on stage. “Doctor, Doctor, Gimme the News, I got a bad case of loving you” heralded Oz’s arrival.

Oz appeared to be the person in the room least preoccupied by the happenstance of his birth to Muslim Turkish immigrants, but his faith kept on coming up.

Matt Brooks, the RJC executive director, set the tone at the outset. Brooks contrasted Oz with Fetterman, who has been endorsed by J Street, the Jewish lobby that advocates Israel relinquish lands as a means of achieving a two-state solution and is reviled on the right as a result. (Friedman has likened J Street to Jewish traitors.)

“You will hear tonight from an incredible candidate, Dr. Oz, a Muslim Republican who is going to be more pro-Israel than his Democratic opponent, think about that!” Brooks said, drawing applause from the crowd of 300. “Their choice is J Street John Fetterman!”

For the RJC, the emphasis on Oz’s faith dovetails with its years-long effort to recast the GOP as a more inclusive party; its first endorsements in this congressional cycle were all Latino and Asian American.

Speaking to reporters after the event, Brooks repeated his concerns about the alliance the GOP nominee for governor in Pennsylvania, Doug Mastriano, has forged with extremists.

“We have some concerns we would like to see addressed,” he said.

But none of that came up onstage, where Friedman used Oz’s religion as an opportunity to talk about what he sees as one of his own signature accomplishments, the Abraham Accords, the normalization agreements between Israel and four Arab countries. (Who on former President Donald Trump’s peace team was preeminent in bringing about the agreements is now the subject of competing books the principals are now publishing: Friedman made his case in “Sledgehammer” and Trump’s Jewish son-in-law, Jared Kushner, just published “Breaking History.”)

“That’s one of the beauties of the Abraham Accords, that there are thousands and thousands and thousands of people in the Muslim world who now become highly pro-Israel,” Friedman said. “I had a conversation with President Trump a few weeks ago and I said, you know, ‘Mr. President, I have an easier time getting a kosher sandwich now in Abu Dhabi than I have in Washington, D.C.’”

Friedman said the Arabs he speaks to understand why he believes Israel should be sovereign over Jewish holy sites in the West Bank precisely because of their deep commitment to Islam. “They’re nothing if not a people bound to an ancient religion with holy sites,” Friedman said.

Oz agreed, saying, to applause, “I don’t think that Israel should give up any of its territory,” but he did not seem eager to do so as a Muslim. When he mentioned the faith he was born into, he was careful to identify as a “secular Muslim.”

Oz’s apparent sensitivities comes after a bruising primary in which one of his rivals, David McCormick, sought to deploy Oz’s dual Turkish-U.S. citizenship against him, and another, Kathy Barnette, had a history of Islamophobic commentary.

Oz squeaked out a win in the primary, assisted by an endorsement from Trump, who saw in Oz a fellow reality TV star who has a facility for communication. But Oz’s persona, at least before he entered the political arena, was expansive and embracing of diversity, which does not jibe with the insularity and suspicion of others that Trump brought to the party.

If anything, the Pennsylvania primary suggested that Trump’s “Make America Great Again” is a creature taking on a life of its own. Barnette, the Trumpiest candidate, said after learning of the Oz endorsement, “MAGA does not belong to President Trump.”

The starkest sign at the RJC event of how hard it might be for a Muslim, secular or otherwise, to navigate a post-Trump GOP came in repeated invocations of the term “Judeo-Christian,” a concept that has dubious origins but which is repeatedly deployed on the right to describe America’s origins and ethos.

For Friedman, the term meant that America’s founding was inextricably tied to the Jewish right’s claim to the West Bank. “We’ve grown untethered from the great Judeo-Christian values that made our country such a great country,” said Friedman. “That’s where the values came from, they came from the land of Israel.”

Friedman confessed to not having been overly aware of Oz prior to his entry into the race, but his experience provided an opportunity for one of the more relaxed exchanges of the evening.

“It’s always good to get your mother-in-law on your side,” Oz said.

It became awkward again when Friedman asked Oz if he understood what some of the signs at the event, spelling Oz’s name in Hebrew and English, signified.

“I’d be shocked if you know this,” Friedman said. “What does the word Oz mean” in Hebrew?

Oz, the successful physician who has read a thing or two in his life, stared at Friedman. “Pure strength,” he said.