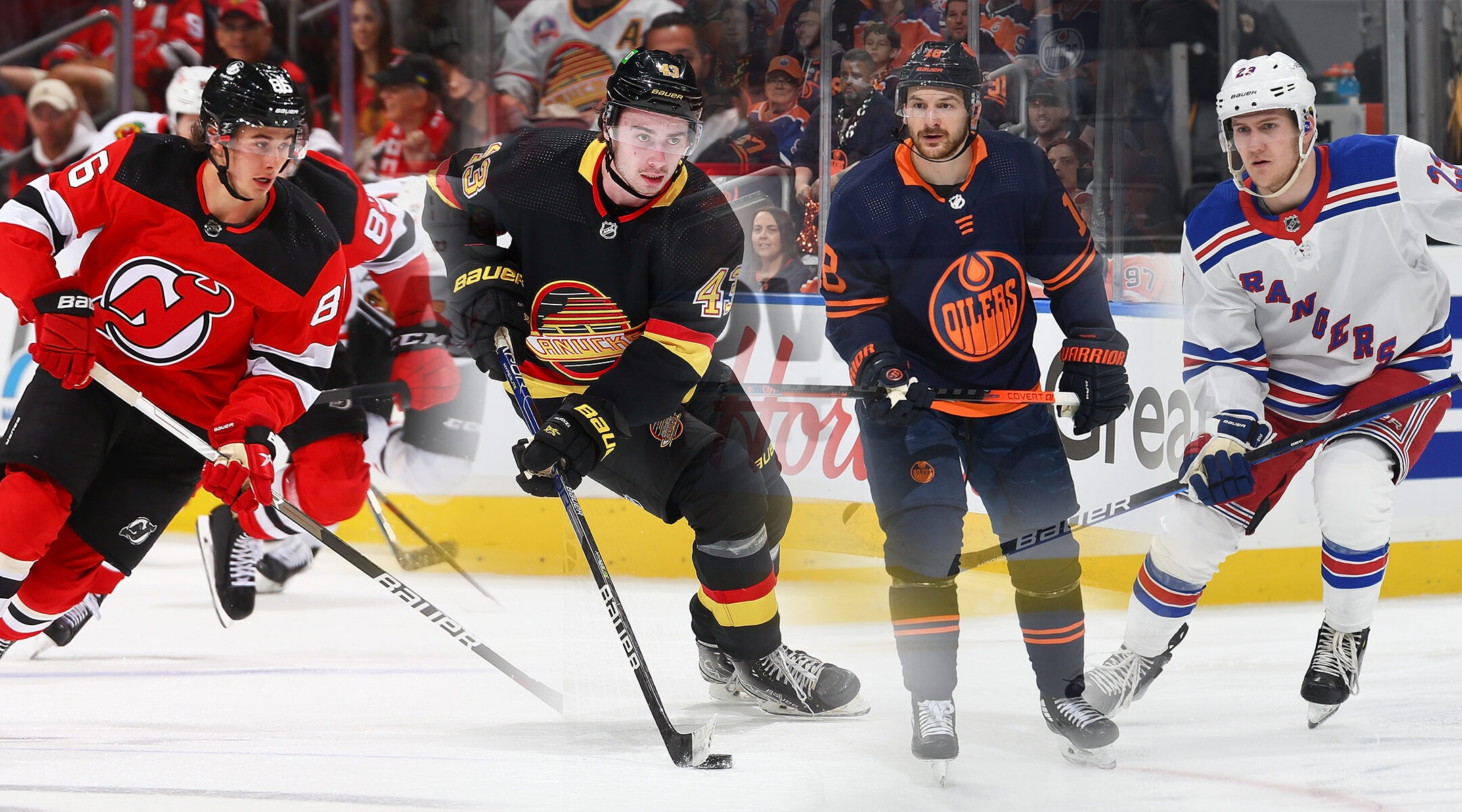 (JTA) — October is a busy month for U.S. sports fans. The MLB playoffs get underway, the NBA season begins, the NFL season kicks into high gear and both the women’s and men’s pro soccer leagues start their postseasons, too.

Sometimes another milestone gets hidden under the headlines of it all: the start of the NHL season. The first puck drops on Friday, ironically in Prague, in a match between the Nashville Predators and the San Jose Sharks. (The first stateside games start on Tuesday night.)

Another phenomenon that hasn’t been widely covered — outside of our roundup least year — is the league’s currently high number of Jewish hockey players. The same remains true of this upcoming season — here’s who to watch. 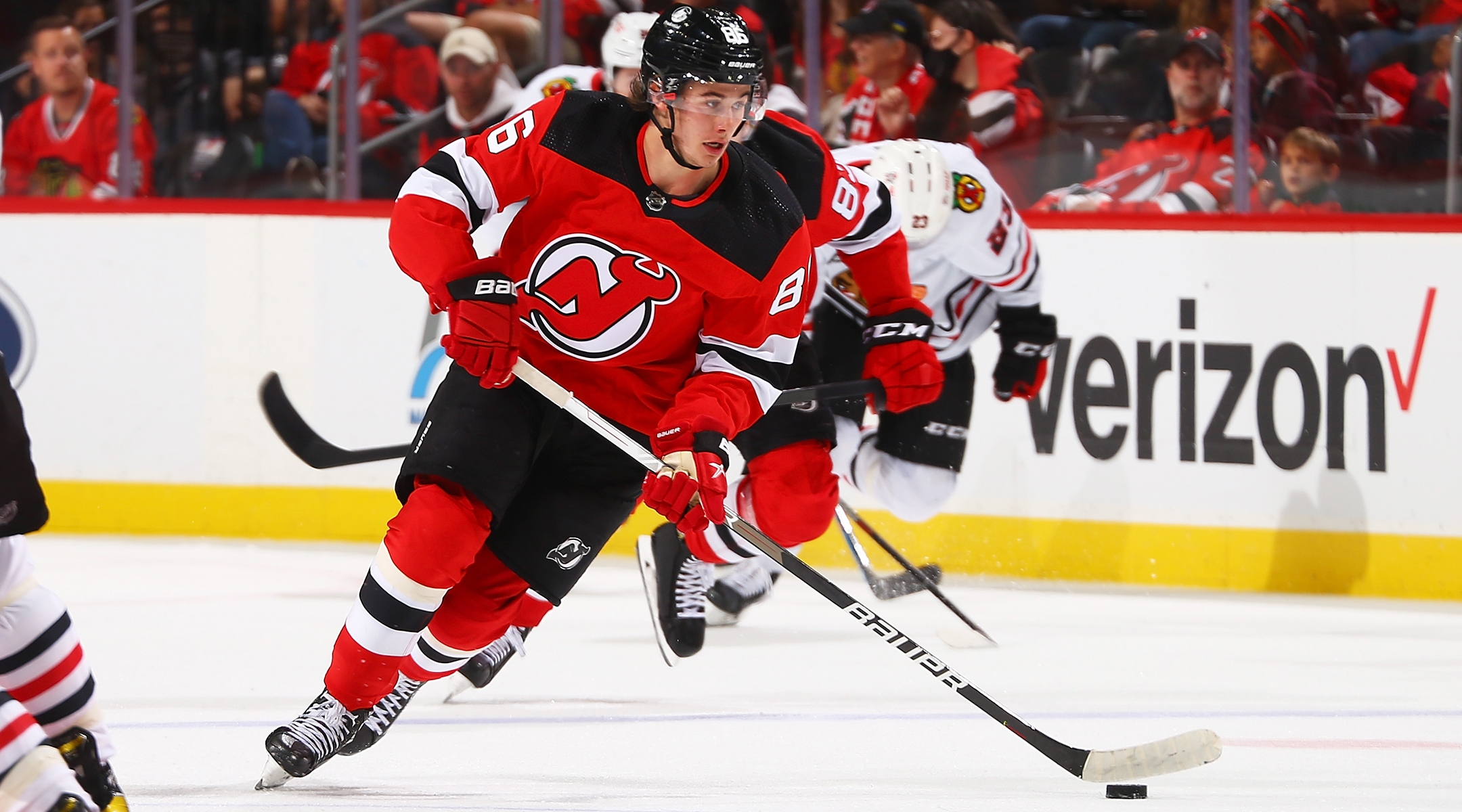 Jack Hughes of the New Jersey Devils in action against the Chicago Blackhawks at Prudential Center in Newark, N.J., Oct. 15, 2021. (Mike Stobe/NHLI via Getty Images)

All did not go according to plan last season for the No. 1 pick of the 2019 NHL Draft. After multiple goals in the season’s first game, including an overtime game-winner, Hughes dislocated his shoulder in the next match and was off the ice for six weeks. Then in April, an MCL injury ended his sophomore season early with 13 games left. “I haven’t done a ton in this league just yet,” Hughes told The Hockey News in August.

And yet, there are plenty of reasons to be hopeful that the rising star will reach his superstar potential. In just 49 games played last season, he still managed an impressive 26 goals and 56 points (goals plus assists). He and new linemates Alexander Holtz and Ondrej Palat have such an instant chemistry that they’re already nicknamed H20 (Hughes-Holtz-Ondrej).

Another exciting nugget: there’s the possibility that Jack’s younger brother Luke could join him on the Devils next season. Luke was selected fourth overall by the Devils last year, and while he’s playing out his sophomore season at the University of Michigan, he has already shown himself to be a rising force in the NCAA and on the world stage as a member of the 2022 U.S. team at the international junior championship.

While it’s unclear how the brothers identify these days, Jack and Luke (and older brother Quinn, see below) were born to a Jewish mother and a Catholic father. While their upbringing was mostly secular, the Hughes family celebrated Passover and Jack had a bar mitzvah.

Jack Hughes’ first game of the NHL regular season comes on Oct. 13, when the Devils take on the Philadelphia Flyers in Philly. 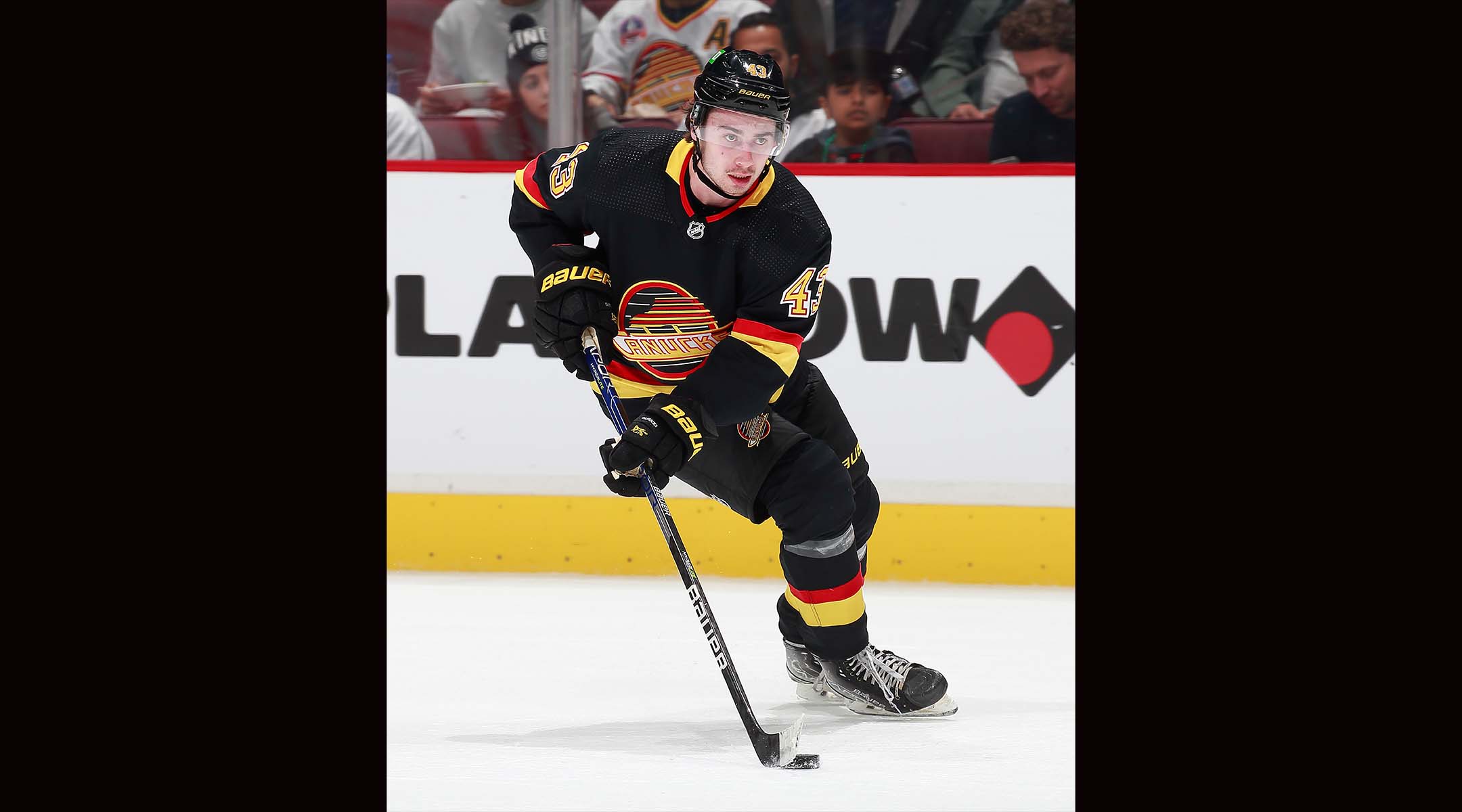 Quinn Hughes of the Vancouver Canucks skates up the ice during a game against the Los Angeles Kings at Rogers Arena in Vancouver, April 28, 2022. (Jeff Vinnick/NHLI via Getty Images)

Is it possible to discuss one of the Hughes brothers without discussing them all? Absolutely not.

Last season, oldest brother Quinn Hughes set a Canucks franchise record for defensemen with a whopping 68 points. Though only eight of those points were goals, Quinn has solidified himself as a premiere playmaker.

His only goal: to take more scoring chances on the ice.

“I want to score more, have more shots on net and create more,” Hughes told press. “I think it’s a mentality and trying to rip it and put it through the net.”

Quinn Hughes’ first game comes on Wednesday, as the Vancouver Canucks take on the Edmonton Oilers (and Zach Hyman, see below) in Edmonton. 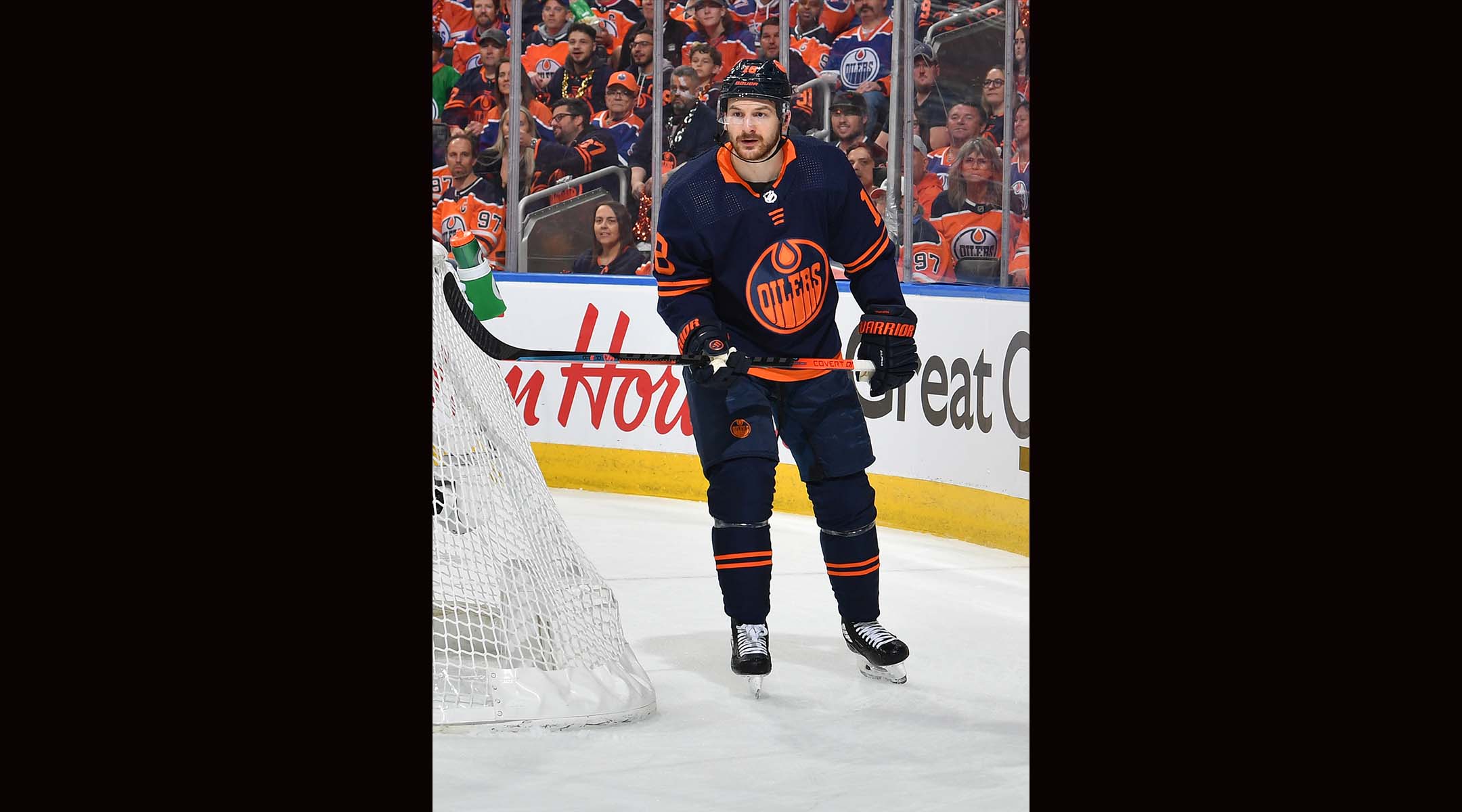 Zach Hyman of the Edmonton Oilers skates during the 2022 Stanley Cup Playoffs in Edmonton, June 6, 2022. (Andy Devlin/NHLI via Getty Images)

After playing with the Toronto Maple Leafs for six years, forward Zach Hyman signed with the Edmonton Oilers last summer and never looked back. The left winger had a stellar 2021-2022 season, recording a career-high 27 goals and 54 points in 76 games — which included 11 goals and 16 points in 16 playoff games.

Of all the Jewish players in the NHL, Hyman is perhaps the most vocal about being connected to his faith and roots. He wears No. 18 for a reason. “I’m Jewish, and in Judaism, 18 is a lucky number; it’s chai, which means ‘life’ in Hebrew,” he told The Athletic last year.

Hyman comes from a Jewish family in Toronto and attended school at the Community Hebrew Academy of Toronto. In 2013, he represented Canada at the Maccabiah Games in Israel, where he won a gold medal.

Last Hanukkah, Zach lit a giant menorah with the Edmonton Jewish community and told The Athletic in February that he finds it important to speak up against antisemitism.

You can watch Zach Hyman’s first game on Wednesday, when the Oilers take on Quinn Hughes’ aforementioned Vancouver Canucks at home. 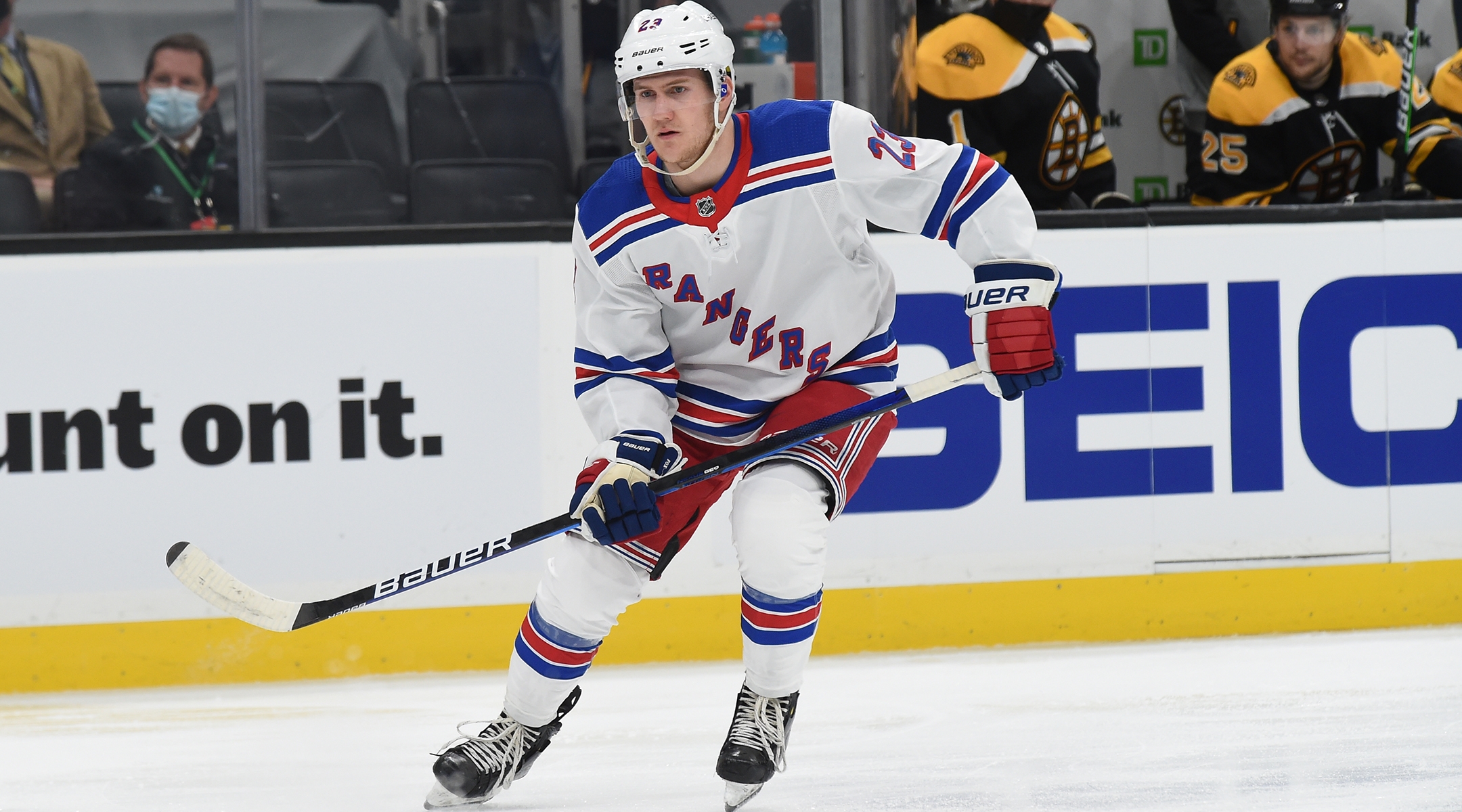 Adam Fox of the New York Rangers skates against the Boston Bruins in Boston, May 8, 2021. (Steve Babineau/NHLI via Getty Images)

While Adam Fox wasn’t the best defenseman in the NHL in 2022, the 2021 Norris Trophy winner still had a pretty darn good 2021-2022 season. The New York Rangers D-man scored 11 goals and racked up 74 points over the course of 78 games, including five goals and 23 points in the playoffs.

So far in the preseason, Fox has worn an “A” on his jersey (signifying him as an alternate captain), sparking speculation that he could be in the mix for elevated leadership this season.

Originally from Jericho, New York, Fox grew up in Long Island’s Jewish community, where he attended the nearby Jericho Jewish Center, a Conservative synagogue. He had a hockey-themed bar mitzvah.

“There are a lot Jewish residents on Long Island, so it’s cool for me to represent that community,” Fox told JTA last year. “And, you know, there’s not many Jewish athletes. So to be one of the few and have people who come from where I come from look up to me… I think it’s definitely pretty special.”

You can watch Adam Fox’s first game on Tuesday, when the New York Rangers take on the Tampa Bay Lightning at Madison Square Garden. 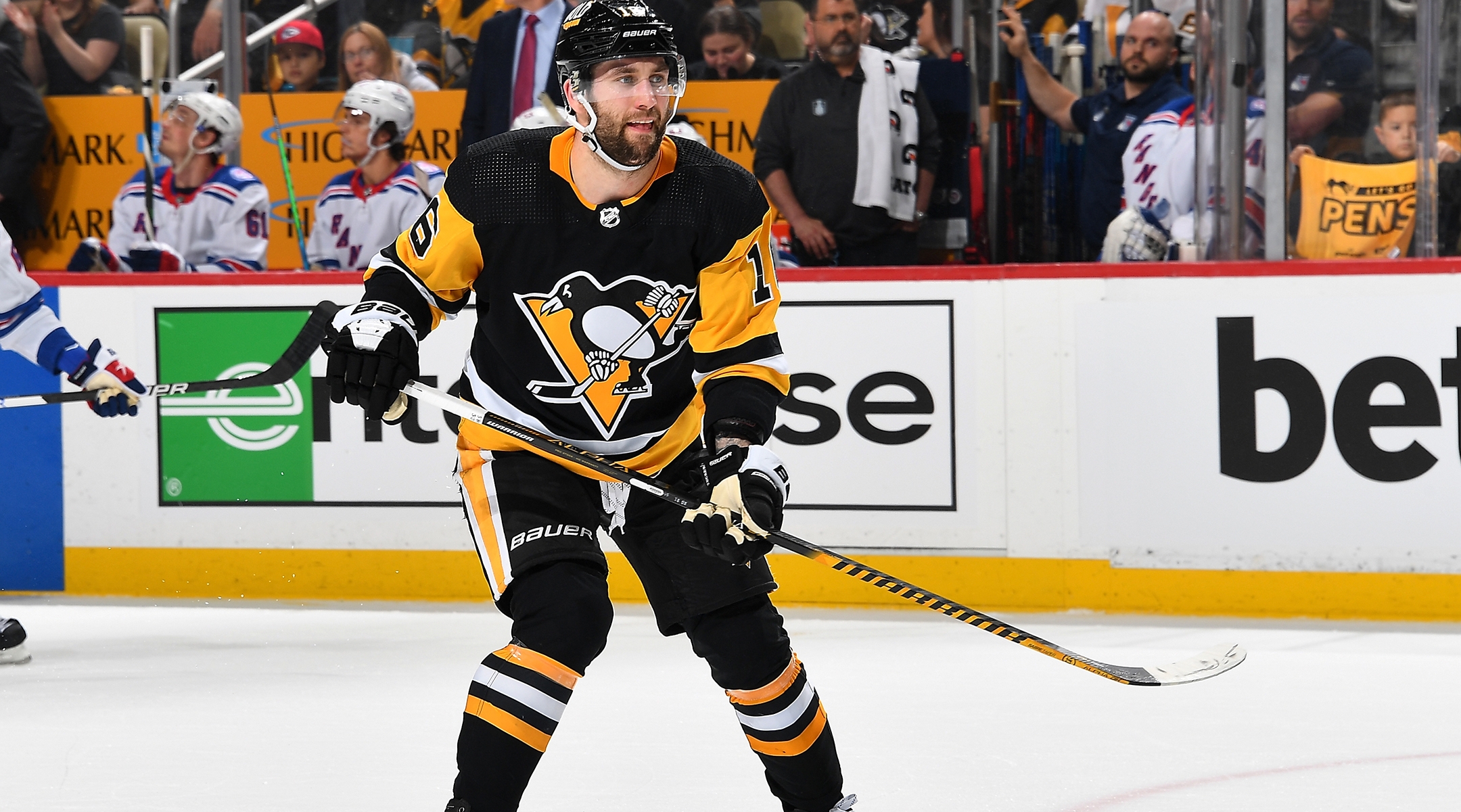 Jason Zucker of the Pittsburgh Penguins skates against the New York Rangers during the 2022 Stanley Cup Playoffs in Pittsburgh, May 13, 2022. (Joe Sargent/NHLI via Getty Images)

In the words of the Pittsburgh Post-Gazette, Jason Zucker — who has a Hebrew tattoo on his left forearm — had a “nightmare” 2021-2022 season with the Penguins. He seemed to reaggravate a core injury that had required surgery in 2017; by December he was sitting out of practices and games. He had another surgery in early 2022 and came back in March only to miss a few more games after he took a hit to the boards.

After a summer of rest and rehab, it looks like Zucker might have his redemption arc. On Sept. 25, he helped the Penguins open their preseason by snagging a game winning goal against the Columbus Blue Jackets, looking fast and healthy on the ice.

LET'S DO THIS AGAIN IN A FEW HOURS! pic.twitter.com/wU2w6pf19z

Though Zucker never had a bar mitzvah, he still engages in Jewish traditions and holidays. “I would do virtual menorah lighting with my family back while I was out of town playing juniors or college,” he explained to the Penguins website.

You can watch Jason Zucker’s first game when the Pittsburgh Penguins take on the Arizona Coyotes at home on Oct. 13. 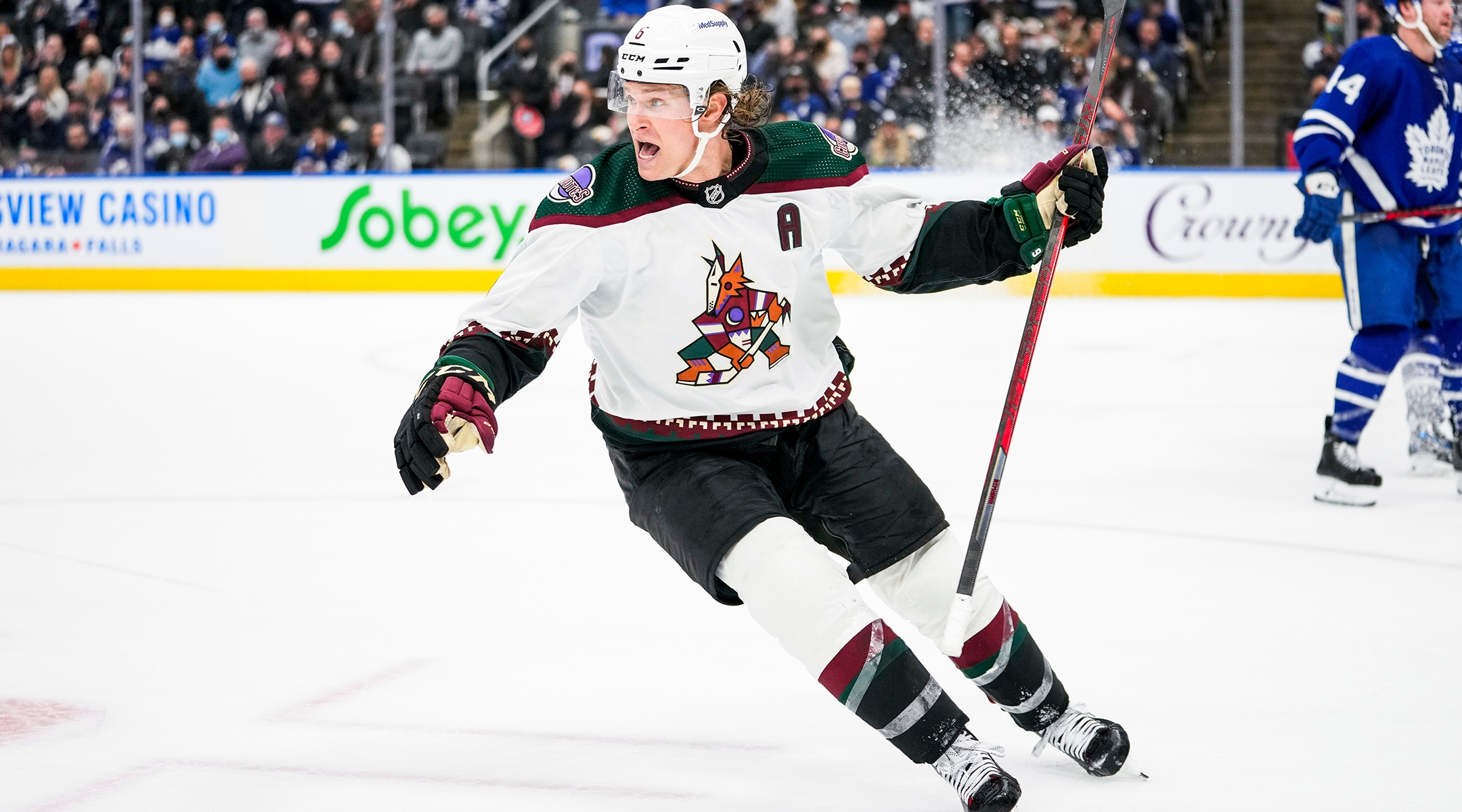 Jakob Chychrun of the Arizona Coyotes celebrates after scoring the game winning goal in overtime against the Toronto Maple Leafs in Toronto, March 10, 2022. (Andrew Lahodynskyj/NHLI via Getty Images)

A good way to measure a player’s talent and value is by who lines up to trade for him when he wants out of the team he’s on. Since Chychrun made clear last month that he wants to be traded from the Coyotes to a playoff contender, several teams have shown interest in the 24-year-old former first round draft pick whose stock is still on the rise.

And he clearly wants to win.

“Careers are so short, the time flies by, and I’m in my seventh year in the NHL. It’s just crazy,” he said. “I don’t want these years to keep going by and be 10, 12 years in and not had a real good chance at not only the playoffs, but winning the Stanley Cup.”

Born to a Jewish mother and Catholic father, Chychrun told NHL.com that he grew up celebrating Hanukkah and Christmas. 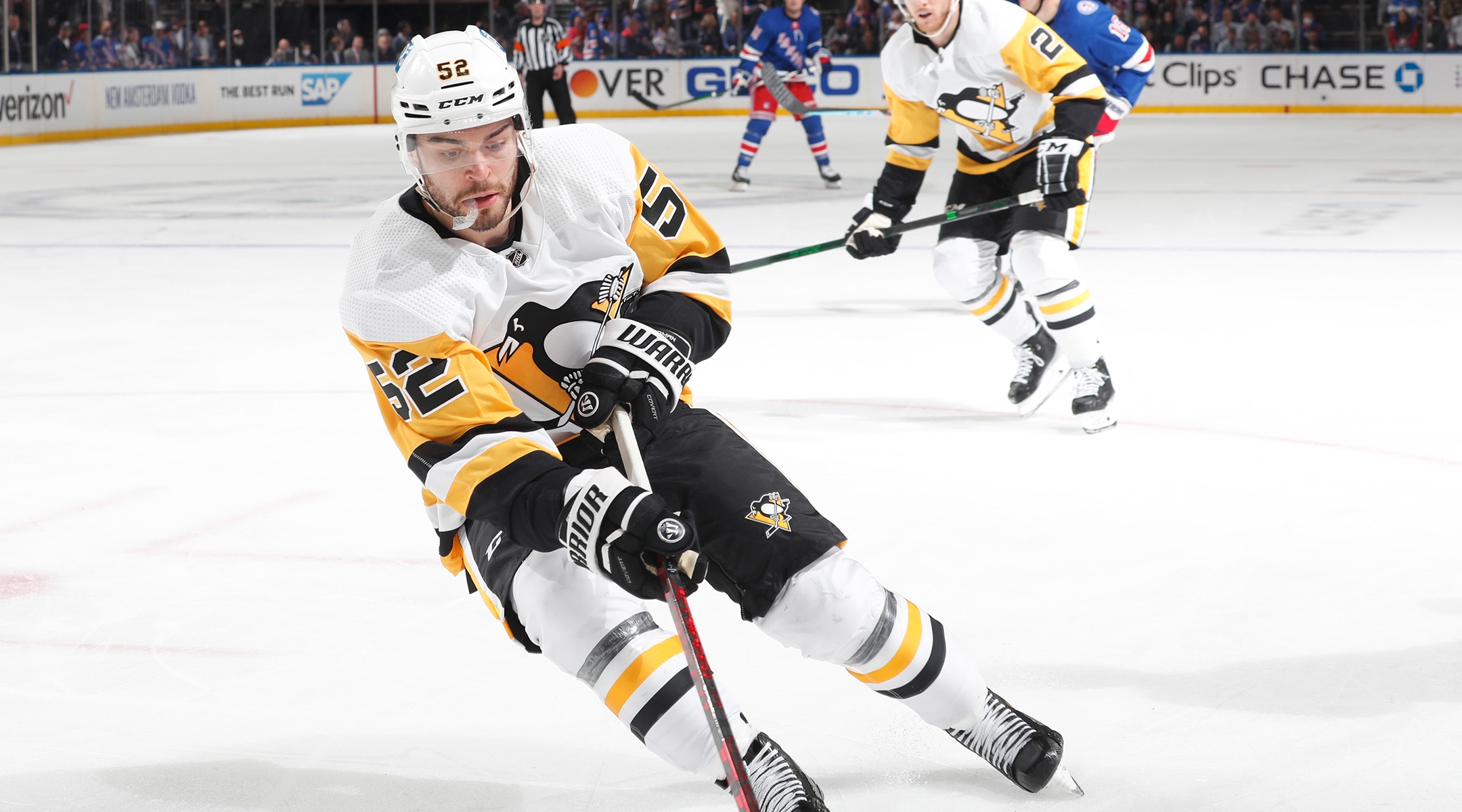 Mark Friedman of the Pittsburgh Penguins skates against the New York Rangers during the 2022 Stanley Cup Playoffs at Madison Square Garden in New York City, May 5, 2022. (Jared Silber/NHLI via Getty Images)

After years of fighting for playing time, 2022 could be Mark Friedman’s breakout season. Some of his younger roster rivals seemed to have better shots at a final starting defenseman spot (even though Friedman is only 26) until stumbling this preseason. After playing in only 16 games through his first three NHL seasons, Friedman played in 26 last year and saw some playing time in the playoffs, too.

“I’ve had to fight for (ice time) my whole life,” he told Pittsburgh Hockey Now. “It’s nothing new. So now I’m ready for the challenge.”

The Toronto native who loves his bubbe’s cooking grew up attending Hebrew school in his early grade school years.

“It’s nice being in a family that’s Jewish,” Friedman told the Pittsburgh Jewish Chronicle last year. “It’s different from most of the hockey world. You don’t see too many Jews playing hockey, especially in the NHL. It’s definitely cool when guys ask about it.” 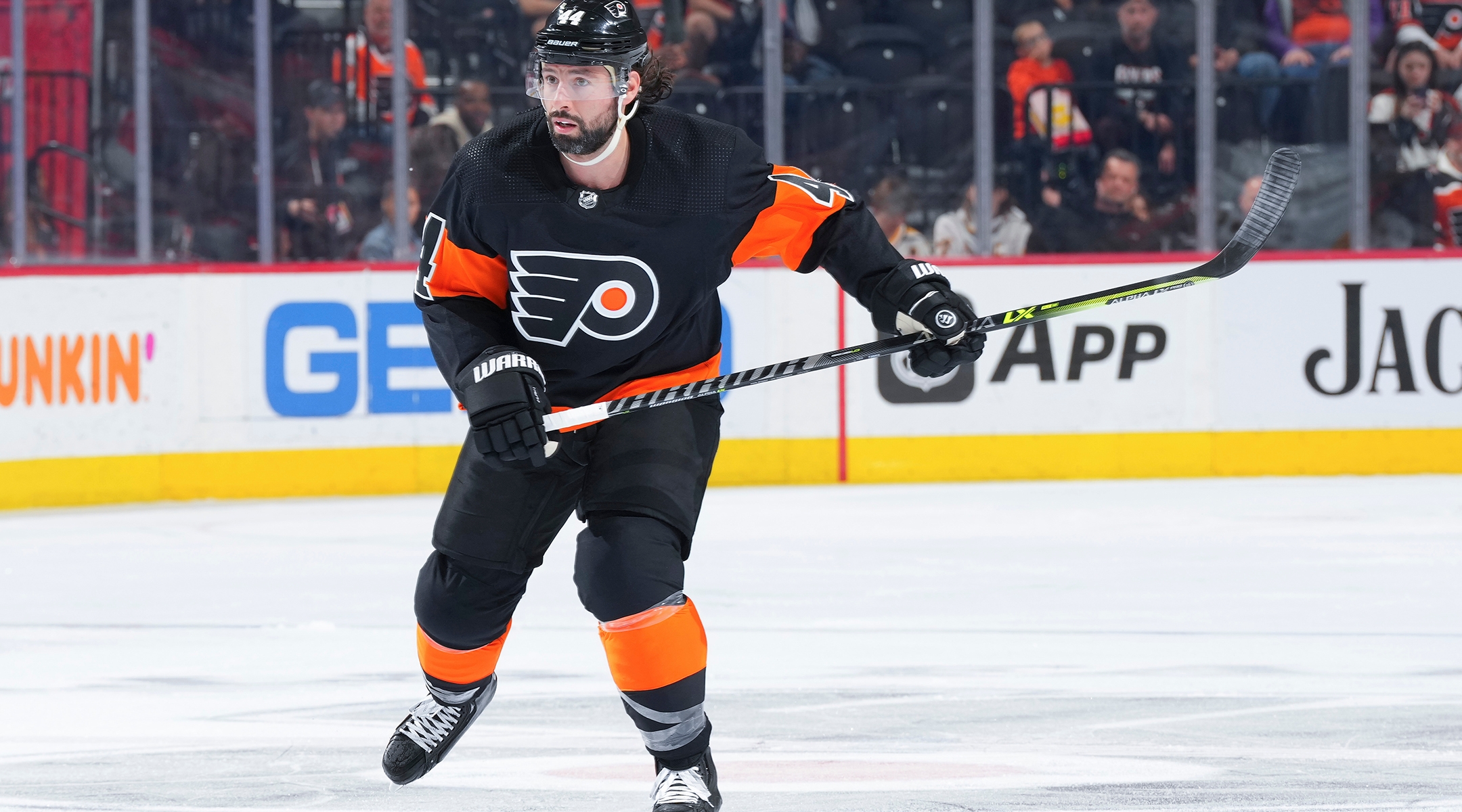