In wealthy Paris hamlet, some Jews reconsider their future 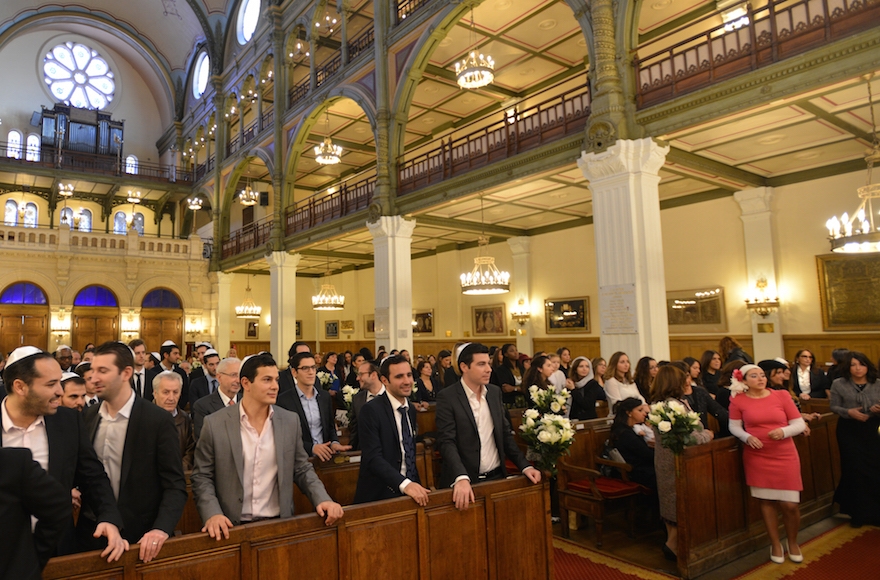 A wedding at the Synagogue des Tournelles in Paris on Nov. 15, 2015. (Alain Azria)
Advertisement

PARIS (JTA) — Babette and Sasha Bergman lead what many would consider a charmed life.

Both Jewish high-tech professionals in their 30s — they met while working at Google’s European headquarters in Ireland — the Bergmans settled in this capital city shortly ahead of the birth of their now 4-year-old daughter, Daniella.

On weekends, they enjoy entertaining friends in their spacious apartment in the 17th arrondissement — an upscale and heavily Jewish district where the anti-Semitic incidents common throughout the rest of Paris are more rare. Many Jews in the poorer quarters say this area is the ivory tower of upper-middle class French Jewry.

Living on a street with three synagogues and near many kosher shops, observing the Sabbath and keeping kosher is far easier in Paris, where some 350,000 Jews live, than it was when they were living in Dublin, says Sasha, who was born in Russia and grew up in the Netherlands.

But in the wake of the jihadist attacks that killed at least 129 in Paris last week, even the Bergmans are finding it increasingly difficult to imagine a future for themselves in a country where Islamist terrorism and violence — including attacks that target the Jewish community — are putting wind into the sails of a rising far-right.

“I love this city, I love my country, but after the initial shock from the attacks and the pain, my first thought was regret that we decided to settle here,” said Babette, who is Sephardic and grew up in the French city of Lyon. Two of her three sisters moved recently to Israel.

In January, soldiers with automatic rifles were posted regularly outside the Bergmans’ building to guard an adjacent synagogue. It was a precaution taken following the slaying by Islamists of 12 people at the offices of the satirical Charlie Hebdo newspaper, followed by two other terrorist attacks, including one at a a kosher supermarket, Hyper Cacher, in eastern Paris that killed four people. The supermarket attack came about three years after an Islamist killed three children and a rabbi at a Jewish school in Toulouse, France.

“We pass them by sometimes with Daniella,” Babette said of the soldiers guarding Jewish institutions. “We’re grateful, but it’s not a normal way to live.”

Two days after Friday’s deadly attack, Babette’s family from Lyon and Israel gathered in Paris for a cousin’s wedding at the historic Synagogue des Tournelles in the Marais, the city’s historic Jewish district.

After the ceremony, the congregants left the synagogue quickly, mostly to make room for the next wedding — there were four Jewish wedding ceremonies planned there that day — but also because some guests said they felt uncomfortable gathering among groups of Jews at a time when terrorists believed to have been involved in the attacks are still at large.

“We’re not too scared to come here and continue our lives as usual,” said Ness Berros, a French Jew in his 20s who attended the wedding. “But we’re too scared to feel exactly at ease right now.”

The synagogue is under heavy guard by soldiers and police officers. Security was even tighter at another event the same day at the Synagogue de la Victoire, also known as the Grand Synagogue of Paris, at a ceremony honoring the victims of Friday’s attacks. The road leading to that synagogue was cordoned off as the participants were patted down for concealed weapons.

Outside Jewish institutions, many of which had suspended their activities following the attacks, streets usually bustling with tourists and locals were much emptier than they otherwise would have been on a sunny Sunday afternoon in November.

Fears were just as pronounced outside the city, in its poorer suburbs, where tens of thousands of Jews live in close proximity to many Muslims — and where tensions often run high. Such neighborhoods provided the majority of Paris-area Jews who immigrated to Israel last year, according to Jewish Agency figures. In total, 6,658 French Jews immigrated to Israel last year, more than triple the total number in 2012, according to Israel’s Ministry of Immigrant Absorption.

In Pavillons-sous-Bois, a northeastern suburb, Sandra Sebbah, a Jewish mother of four, says the soldiers outside her children’s Jewish school “might as well be cardboard cutouts” because “they won’t stop an attack by the people with the kind of determination we saw.” Sebbah said she cannot leave France because of her husband’s work, but encourages her children to “live somewhere else, like normal people and not like this, where I am afraid every minute they’re not home — especially when they’re at school.” 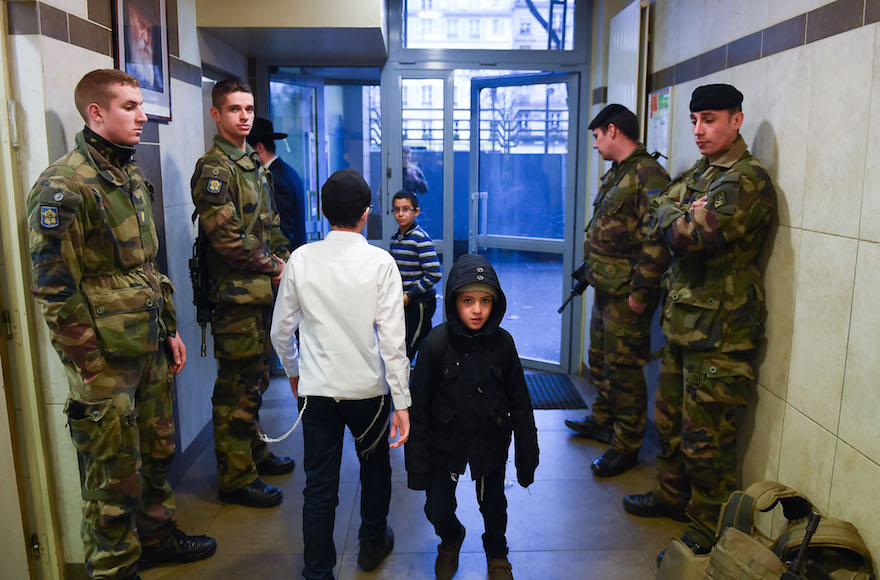 Soldiers guarding staff and children at a Chabad school in Paris, Nov. 16, 2015. (Israel Bardugo, courtesy of the International Fellowship of Christians and Jews)

Meanwhile, many French Jews worry the attacks will strengthen the popularity of the National Front,  a far-right, anti-immigrant party that French Jewish groups have largely shunned for the anti-Semitic track record of its founder, Jean-Marie Le Pen. His daughter, Marine Le Pen, the party’s current leader, recently removed her father as the party’s honorary president because of anti-Semitic statements he made that she called unacceptable.

In a poll conducted two weeks before the Paris attacks, Marine Le Pen emerged as an early favorite candidate in the 2017 presidential elections. Some 30 percent of those polled said they would vote for her over the incumbent Socialist Party president, Francois Hollande, who would garner 19 percent of the vote.

Back at the Bergmans’ apartment in central Paris, Babette’s father, Gerard, said the attacks reminded him of his childhood. A dentist in his 60s, he  left Constantine, Algeria, in the 1960s amid a bloody civil war, in which local nationalists fought France for independence and each other for dominance. Gerald, who did not want his last name used in print, said his family narrowly survived a bombing outside their home because they were at a restaurant when the explosive detonated.

“Now it seems to me the same barbarians are coming to drive me and my family once again, this time out of France itself,” said Babette’s father, adding he will probably leave for Israel within the next few years.

His wife, Jacqueline, who was born in Morocco, said she believes the war in Algeria may have traumatized her husband.

“I had a very different childhood in Casablanca,” she recalled. “When we talk about coexistence, I know it’s possible because I lived it, with neighbors, Arabs and Muslims, living together, acknowledging each other’s holidays.”

Still, Jacqueline said, she also sees no future for Jews in France.

“Something happened in the 1990s, a bad wind started blowing from the outside,” she said in reference to hateful sermons and jihadist propaganda that began to spread through satellite television and continue to be disseminated online. “We didn’t have this external influence, poisoning everything in its wake.”

After the wedding celebration, a visibly tired Sasha puts Daniella to sleep and prepares to drive for an hour and a half to a university campus in Fontainebleau, where he is completing an executive MBA program.

The master’s degree, he says, may be important for his young family’s future.

Besides, he adds, “It’s so peaceful out in the countryside.”