Is it Islamophobic to oppose the mosque next door? London Jews debate the question. 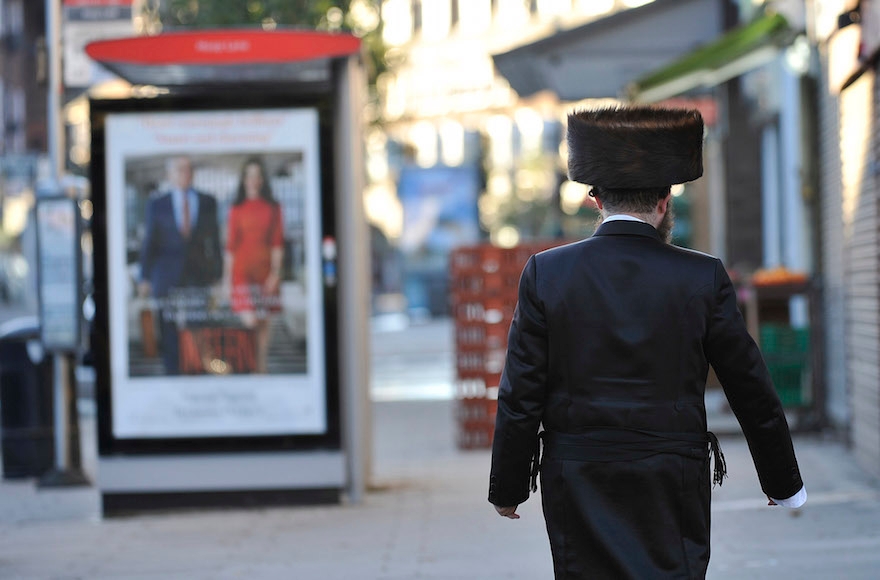 (JTA) — A plan to open a mosque in a heavily Jewish area of London is dividing British Jews, with some calling the development worrisome and others accusing its opponents of racism.

The Islamic center is slated to open next month at the Hippodrome, a former concert hall in the heart of the north London neighborhood of Golders Green. The area is home to thousands of Jewish families of all major denominations and many synagogues, Jewish schools, kosher shops and restaurants, even hotels for devout Jews.

By Sunday, more than 5,600 people had signed an online petition urging municipal officials to investigate possible bylaw infractions by the center, which has received all the required permissions following the building’s purchase earlier this year by an Islamic charity. The petition does not mention the religious dimension, citing instead potential “disruptions” to traffic, as well as parking and air pollution.

But below the surface, the planned mosque has touched off an acrimonious exchange among those who welcome the new center, with its capacity of 3,000 visitors, and those who fear it. Some opponents worry that the mosque could lead to friction between British Jews and members of the Muslim minority, which surveys suggest is among the most anti-Semitic segments of British society.

“There is a concern around this very divisive issue,” said Jonathan Hoffman, a North London-based blogger and former vice chair of the Zionist Federation of Britain. “There is concern about Muslim anti-Semitism.”

Hoffman said his comments don’t mean he personally opposes the new center, but merely that he understands both sides of the debate.

Multiple surveys performed in recent years show far greater prevalence of anti-Semitic sentiments among Muslims compared to the general population. (A September survey suggested that Muslims were twice as likely as non-Muslims to espouse anti-Semitic views).

A 2008 study by the Community Security Trust, British Jewry’s watchdog on anti-Semitism, attributed a third to half of all violent anti-Semitic incidents to perpetrators described as having an Arab or South Asian appearance.

Jewish-Muslim outreach has been more successful in the United Kingdom than elsewhere in Europe, with communities running successful joint programs, helping out one another and lobbying jointly.

Jonathan Arkush, president of the Board of Deputies of British Jews, attributes some of this relative success to the fact that South Asian Muslims make up a larger proportion of the Muslim community in Britain than elsewhere in Europe. Arab Muslims are likelier to espouse anti-Israel and anti-Jewish views, he said in a February speech.

Nonetheless, opposing an Islamic center in Golders Green – a place many local Jews consider a safe haven from the effects of rising anti-Semitism elsewhere in Britain — is about “ensuring the continuation of a safe Jewish community” there, according to a British Jewish man in his 30s who grew up near Golders Green. Zvi spoke to JTA about the issue on condition of anonymity so as “not to be painted in the media as a racist.”

Indeed, to some British Jews, such concerns are merely a thin veil to mask anti-Muslim racism.

The fears around the new center “are baseless,” Stephen Pollard, the editor of the Jewish Chronicle of London, wrote in an op-ed published Monday titled “Shame on the Hippodrome protestors: The real story here is bigotry.” Concerns about the center are “pure bigotry: The idea that any Muslim is, by definition, our enemy,” he wrote.

“There is no data on the reason why people are unhappy about the mosque, so for Pollard to say this is to make a disgraceful assumption,” Hoffman said.

Members of the Jewish community who researched the Muslim charity — a largely Iraqi and Iranian Shiite congregation called Hussainiat Al-Rasool Al-Adham – found no ties to the Iranian regime or extremist incitement, an expert on Islamism who ran some of the checks told JTA on Tuesday.

“If anything, this is a pro-Jewish group,” said the source, who spoke anonymously.

Some Islamic centers, the source said, do raise security concerns for neighboring Jewish residents and beyond.

“It really depends on the mosque,” the expert said.

Nonetheless, Jews in Golders Green will have to get used to the unfamiliar and potentially disturbing, the expert said. That includes the annual Ashura march, when some men whip their own shirtless backs and chests until they bleed to mourn the death of the founder of the Shiite stream of Islam in the seventh century.

“That and women in hijabs and burkas may be alarming to people in Golders Green, even though these sights pose no risk,” he said.

Geoffrey Alderman, a historian and former member of the Board of Deputies of British Jews, conducted his own inquiries into the center’s owner. They also led him to believe the group “should not be a concern from the Jewish point of view,” he told JTA.

Alderman, who lives in the neighboring suburb of Hendon, said on a personal level that he “might be concerned if not anxious as to what is going on” inside the mosque if it were to open in his neighborhood. But “just as the Jewish community of London has the right to buy property and turn them into places of worship, so do other religious groups,” added Alderman, who does not oppose the new center.

Hoffman, the blogger, said concerns about the Golders Green mosque reflect apprehension about broader changes in British society. Assimilation, internal immigration and emigration mean that Jewish minority has grown at the rate of 1.3 percent per decade, far smaller than that of British Muslims. (The Muslim population grew from 1.55 million in 2001 to 2.77 million a decade later, according to the Muslim Council of Britain.)

“Society is changing, plenty of synagogues are no longer in use, [or] are changed over to a different use. There is emigration, especially by Jews,” he said. “The Muslim population is growing and they will need more mosques. But building such a large mosque in that particular area is very controversial.”

Marie van der Zyl, a vice president of the Board of Deputies, said in a statement Tuesday that her organization was “heartened” to hear in talks with leaders of the new Islamic center “about their commitment to opposing anti-Semitism and extremism.”

While there are “legitimate concerns around planning,” the board “deplores the uninformed and prejudiced comments about this application, including from a small number of members of our own community,” read the statement.

To Hoffman, the dismissal of concerns by communal leaders over the religious dimension of the new center shows the issue “divides the community’s leaders from the rest.”

Ambrosine Yolanda Shitrit, a leader of the opposition to the Muslim center and a Golders Green activist for several right-wing Jewish causes, wrote Monday on Facebook that she is “concerned” for the safety of her daughter in Golders Green.

“I don’t feel my so-called community can keep my family safe anymore. They’re not on our side,” she wrote.

Ahmad Alkazemi, a spokesman for the Islamic center, said in a statement that his community “looks forward to playing our part in Golders Green’s diverse community, and we will always act as considerate neighbors and sincere friends towards the Jewish and other residents of this area.”

The Hussainiyat Al-Rasool Al-Adham center “will never tolerate any form of hate speech on our premises, and we stand completely opposed to and will firmly address extremism, antisemitism and all forms of hatred through education and bridge building,” Alkazemi wrote. “We regard Jews and Christians alike as our friends.”