There’s a new ‘new anti-Semitism’ in Western Europe, and it feels eerily familiar 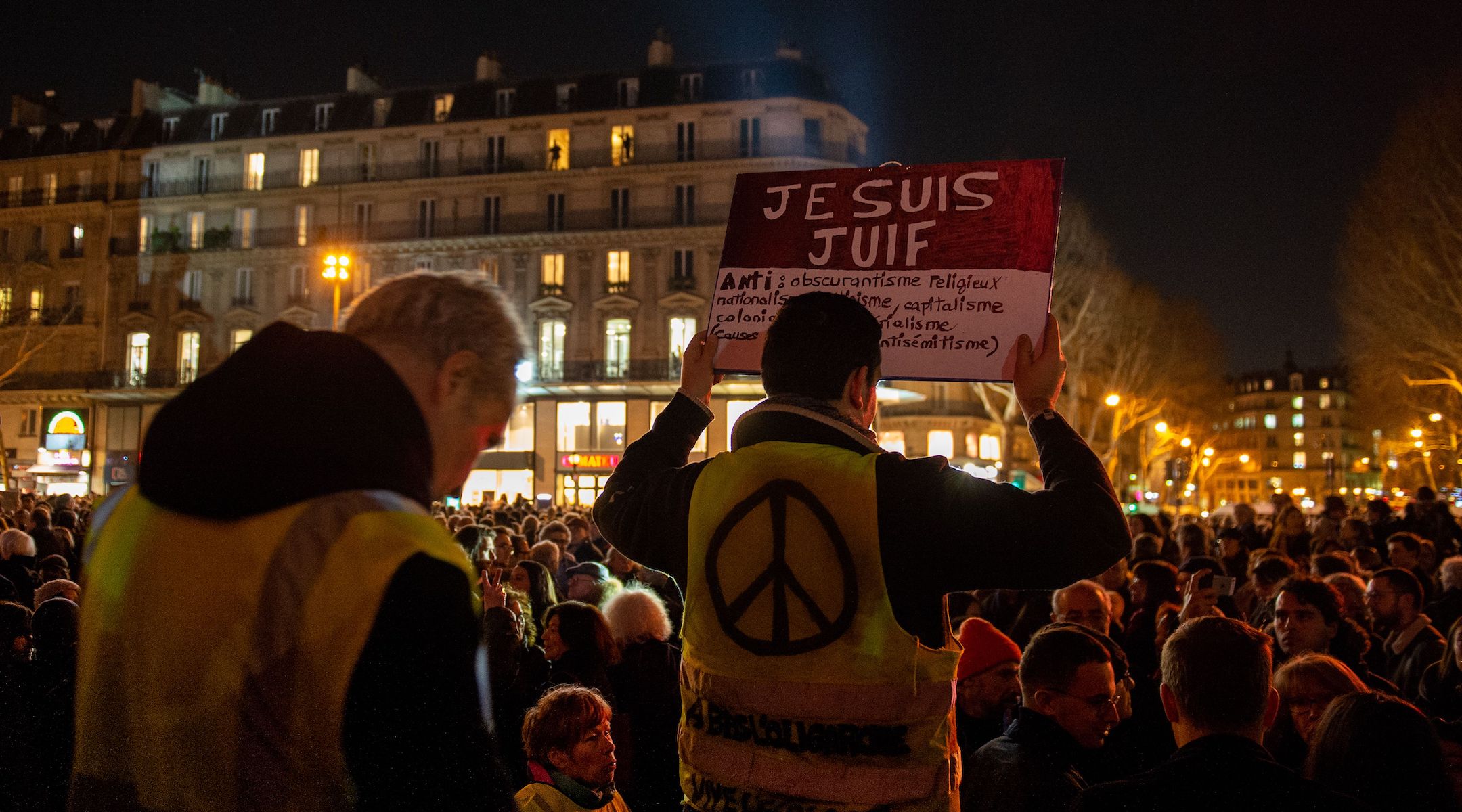 Protesters against anti-Semitism participate in a rally at Republique square in Paris, Feb. 19, 2019. (AFP/Getty Images)
Advertisement

AMSTERDAM (JTA) — The working assumption about 21st-century anti-Semitism is that it is making a comeback in Western Europe due to a “perfect storm” driven by Muslim immigrants and European white ultranationalists.

This basic model has corresponded with the flowering of hate speech and crimes against Jews in Western Europe that began around 2000. That year, Muslim extremists for the first time torched several French synagogues over Israel’s war on Palestinian terrorists during the second intifada.

It was the onset of a phenomenon that later became known as “new anti-Semitism,” in which Jews are targeted as Israel’s agents or as payback for the Jewish state’s perceived abuses.

Two years later, the Holocaust denier and anti-Muslim agitator Jean-Marie Le Pen took his far-right National Front party to the second round of the presidential elections for the first time.

These coinciding developments heralded a new and disturbing reality in which two rival and relatively small groups appeared to be growing and, through their rhetoric and actions, were eroding the taboo placed on anti-Semitism following the horrors of the Holocaust.

But over the past four years, anti-Semitism in Western Europe has mutated yet again, reverting to its 20th-century economic elements and gaining a strong foothold in swelling populist movements. Purveyors don’t necessarily share a common political view, but they agree that Jews are the exemplars of an establishment they seek to overthrow.

This mutation, most visible in France’s yellow vest protests and the spreading of anti-Semitism within the British Labour Party, is remarkable in how quickly it has moved from the fringes of public discourse into mainstream frameworks.

But the main and possibly most troubling distinction of the latest new anti-Semitism is how it cuts across major religious and ideological differences among its propagators, uniting unlikely bedfellows such as neo-Nazis, communists and jihadists under a single cause.

“Anti-Semitism in Western Europe is morphing again,” said Mike Whine, the government and international affairs director at the Community Security Trust, British Jewry’s watchdog group. “It may take government a long time to recognize the change,” he told the Jewish Telegraphic Agency.

Reflecting the change is how rhetoric on Jewish domination of finance — often personified in the Rothschild banking family — has become “pervasive” in Labour since the far-left politician Jeremy Corbyn was elected to lead the party in 2015, according to Euan Philipps, the spokesman for the Labour Against Anti-Semitism action group.

This month a former lecturer at the University of Liverpool, who chairs a local branch of the Labour Party, was reported to have shared conspiracy theories about the Rothschild family on a talk show. Another party activist retweeted Rothschild memes from the anti-Semitic conspiracy theorist David Icke. A former Labour parliamentary candidate in Essex endorsed an online post in 2017 claiming the “Rothschild Family” was behind a Zionist plot to “take over the world.”

Andy Slack, who represented Labour on the City Council of Chesterfield, near Manchester, was suspended in 2016 for posting on Facebook an image of a hook-nosed Israeli soldier whose mouth and hands are covered in blood. The caption read “Israel was created by the Rothschilds, not God … And what they are doing to the Palestinian people now is EXACTLY what they intend for the whole world.”

In Spain, the leader of the rising far-left Podemos party, Pablo Iglesias, has hosted guests many times who inveigh against “the Jewish control on Wall Street,” as one of them defined it recently on his show “Fort Apache,” which airs on the Iranian regime’s propaganda channel HispanTV.

In France, which is home to nearly half of Western Europe’s approximately 1.3 million Jews, similar rhetoric has emerged in a wave of yellow vest demonstrations over fuel prices and taxes that began in November.

From the onset, supporters of that mass movement took up anti-Semitic language, including a banner that called French President Emmanuel Macron “a whore of the Jews” and “President Rothschild.”

Last week, yellow vest protesters mobbed a Jewish philosopher who has declared his principled support for their cause. As police officers escorted Alain Finkielkraut to safety, the crowd chanted for him to “go to Tel Aviv” and called him “dirty Zionist.”

Leaders of that chaotic movement have either ignored these incidents or downplayed them as marginal while professing their general opposition to all forms of discrimination.

More than any other incident, the exchange involving Finkielkraut led to a wave of indignation in France over anti-Semitism. Thousands gathered in Paris on Tuesday for a rally against that form of racism following Macron’s condemnations, especially the incident involving Finkielkraut. Other rallies were held across the country.

But that case was an example of the so-called new anti-Semitism that erupted in 2000, in which anti-Israel sentiment played an outsize role.

The proliferation of theories about Jewish financial power and the Rothschilds do not involve Israel. And while this form of classic anti-Semitism, associated with “The Protocols of the Elders of Zion,” had never entirely left Europe, it certainly had been marginalized after the Holocaust.

“Its return in a big way is a new development,” according to Marc Weitzmann, a French author and journalist who has written extensively about anti-Semitism in France.

The main components of modern anti-Semitism in France are not new, Weitzmann said. What has changed, he said, is how the narratives of the far left, far right and Muslim extremists “have begun to mirror each other and are now converging against the Jews and toward violence in ways that would haven been unthinkable in France prior to 2015.”

Weitzmann said the catalyst for this convergence are jihadist terrorist attacks that have claimed hundreds of lives in France and Belgium since ’15.

“Terror has freed a general violence” in society, he said.

As for the return of anti-Semitic conspiracy theories to mainstream debate in Europe, it does not come as a shock to Whine, the Community Security Trust executive from Britain.

“You’ve always had this sentiment under surface,” he said. “It’s coming out as a result of the collapse of the political center, loss of faith in democratic institutions and economic crises, for which Jews are being blamed.”

The mainstreaming of classical anti-Semitism by the far left was seen in 2013 when Corbyn publicly defended a London mural depicting Jewish bankers playing Monopoly on the backs of black people. The incident “in many ways represents the problem,” Whine said. (Corbyn has since apologized for defending the work.)

On the right, politicians who were considered centrist not long ago have also taken up language reminiscent of 1930s vitriol about Jews.

Last year, Hungarian Prime Minister Viktor Orban said in a speech that his government was fighting an enemy that is “not open but hiding; not straightforward but crafty; not honest but base; not national but international; does not believe in working but speculates with money; does not have its own homeland but feels it owns the whole world.”

President Donald Trump’s election amid his expressions of disdain for “globalists” has coincided with a marked increase in hate crimes against American Jews — some by perpetrators who identify those globalists as Jewish.

Amid widespread discontent with the European Union, vilification of Israel and radicalization in Muslim communities, the number of anti-Semitic incidents reported in Western Europe has increased in Germany (10 percent over 2017 to 1,646 incidents); France (74 percent to 541 cases) and the United Kingdom (16 percent to a record 1,652 incidents last year).

Western European governments, several of which have recently adopted a far-reaching definition of anti-Semitism, have not been idle as all this was happening.

In France, where soldiers were posted to guard synagogues in 2015 following a jihadist’s slaying of four Jews at a Paris kosher shop, the judiciary has cracked down on anti-Semitic hate crimes. Last month, the anti-Semitic author Alain Soral was given a rare one-year prison sentence for his writings.

Addressing the advent of new anti-Semitism, Macron in 2017 became the first French president to publicly call anti-Zionism a form of anti-Semitism. He said this at his country’s main Holocaust commemoration event.

In Britain, the government last year pledged $17.5 million in security funding for the Community Security Trust, which fights anti-Semitism in addition to providing protection to British Jews.

And in Germany, the government created a new role of commissioner for fighting anti-Semitism, among other actions.

So why has this action and awareness failed to lower the flames of ant-Semitism?

To Weitzmann, the answer is in the conspiratorial sentiments that fan the flames of anti-Semitism in the first place.

“Government efforts to curb anti-Semitism fail precisely because they’re coming from the government, which anti-Semites believe is controlled by globalist Jews,” he said. “It’s a vicious cycle.”

Still, talk of a return of 1930s anti-Semitism to Europe is inaccurate, said Weitzmann, whose book about these issues, “Hate,” will be coming out next month.

“Back then, anti-Semitism was implemented from governments down,” Weitzmann said. “Today it’s the other way around: It’s rising from the base and governments are trying to stop it, although not very successfully.”