In a Brexit bastion near London, a growing Orthodox community springs to life 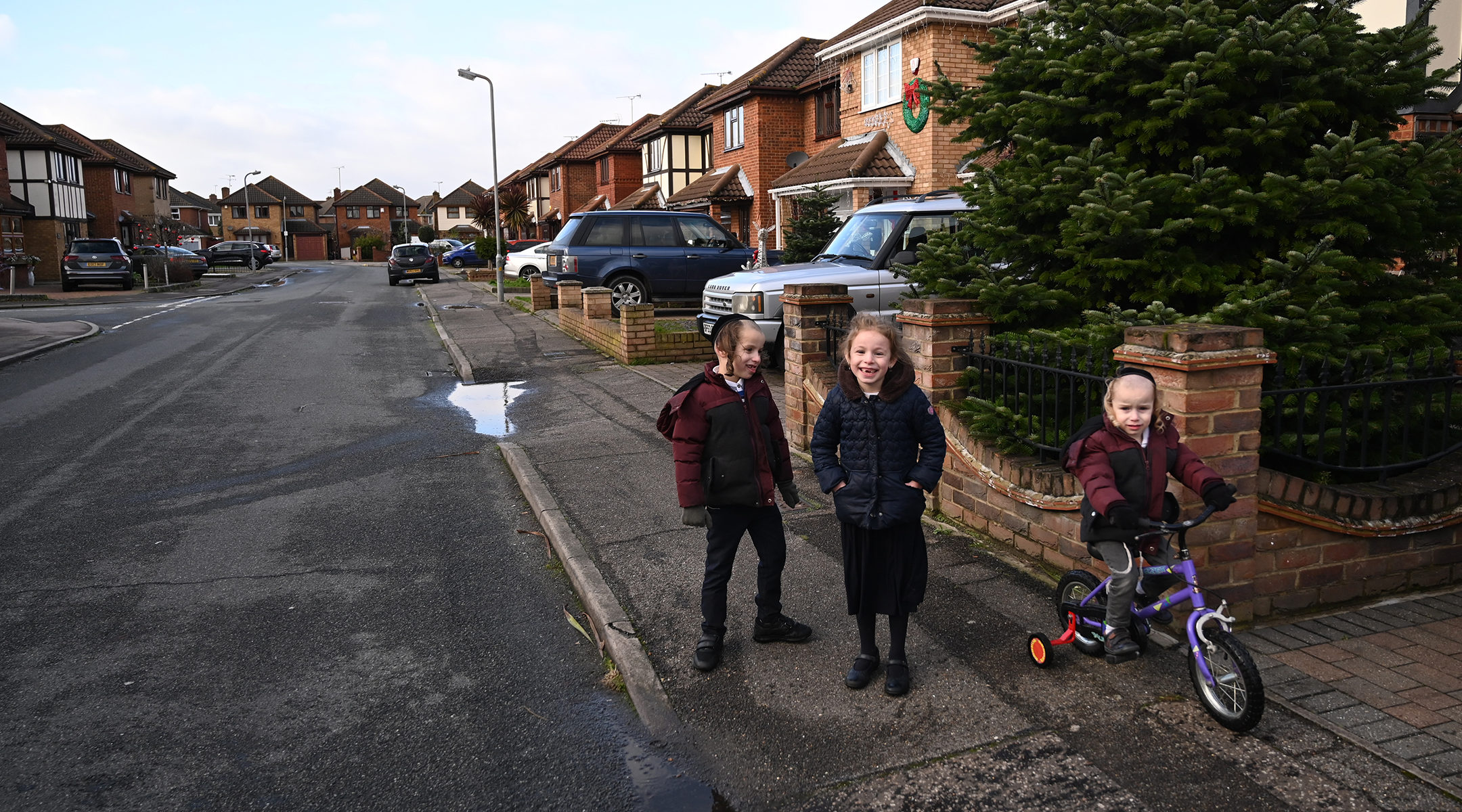 CANVEY ISLAND, England (JTA) — This scruffy-looking town on the mouth of the Thames River is known for its oysters, sea breeze and the nativism of its residents.

It’s also home to one of Europe’s fastest-growing communities of haredi Orthodox Jews, who make up 1% of the local population just four years after the first families moved from London.

A whopping 72 percent of Canvey Island’s constituency of Castle Point voted for Brexit in the 2016 referendum — 21 points above the national result and the third most pro-Brexit of the United Kingdom’s 650 constituencies.

Brexit, the United Kingdom’s anguished pullout from the European Union, is becoming reality this week. It has toppled two cabinets before its achievement became the core policy of the Conservative Party’s prime minister, Boris Johnson.

Brexit’s proponents say it will restore British sovereignty from the EU, which they perceive as increasingly encroaching on domestic issues. Opponents say it is both rooted in and amplifying xenophobia, as well as financially hazardous.

Wherever the truth lies, a pro-Brexit bastion like Canvey Island hardly seems like the most intuitive place for haredi Jews to settle down.

Yet that’s exactly what Joel Friedman, a 33-year-old father of seven from London, and a handful of his friends did in 2016, when they planted the seed for what has rapidly grown into a community of 76 families who could not afford the housing prices in nearby London.

When Friedman presented his plan to members of his community in the heavily haredi London neighborhood of Stamford Hill, the reactions he encountered ranged from dismissiveness to shock, he told the Jewish Telegraphic Agency.

“Some people told us, ‘Don’t go there, they’re all racists there, they’re all for Brexit,’” he recalled. (Friedman added he believed that haredi Jews who care about Brexit are as split on the issue as other involved members of the general population.)

Despite some minor incidents involving anti-Semitism, walking around Canvey Island – it’s not an island at all — while wearing the clothes of haredi Jews is “absolutely safe,” Friedman said. “We have excellent neighborly relations.” 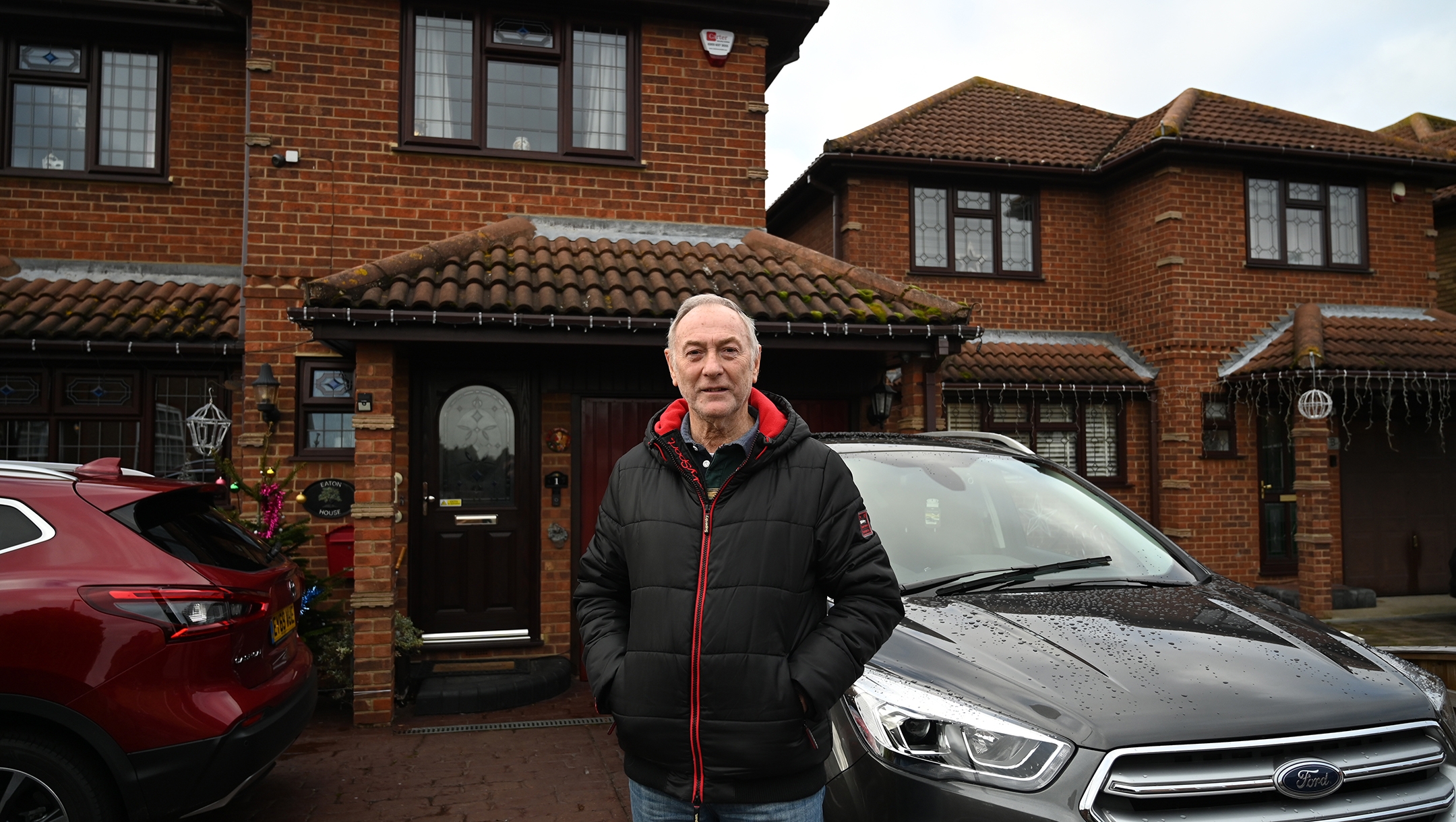 “They’re not worse than anyone else you might want as your neighbor,” he said. “They keep to themselves, mind their own business, and so do we, really,” added Eaton, who voted for the Conservatives and supported getting Brexit done.

Anti-Semitic incidents were due to young quarrelsome men, often drunk, rather than any organized ideological group or opposition to Jewish presence, several members of the local Jewish community said in interviews with JTA.

Eaton is one of many white, English baby boomers who moved sometime after the 1970s from London to Essex, the county to which Canvey Island belongs. Just like the haredim, the baby boomers came to improve their quality of life and for affordable housing.

But many of them also were eager to leave behind the increasingly multicultural metropolis of London, which began seeing an influx of immigrants from Asia, Africa and other parts of Europe about 50 years ago.

The so-called white flight to Canvey Island may explain why the center-right Conservative Party has won here in all but one election since 1983.

As in the United States, haredi Jews in the United Kingdom seem to vote overwhelmingly for right-wing parties, and Canvey Island’s political orientation has helped its new arrivals feel at home.

“We’re conservative, they’re conservative,” Jacob Gross, a father of six who is in charge of security for Canvey Island’s Jewish community, said of the town’s Jewish and non-Jewish contingents. “Despite our differences, there’s a worldview that we share.”

Politics, though, were not what brought the Jews to Canvey Island, which has about 40,000 residents and 16,000 houses.

Back in northern London, which is about an hour’s drive from Canvey Island, Friedman was living in a rented home with three bedrooms worth well over a million pounds, or $1.3 million – a sum that is wholly unaffordable to most haredi families and double what such a property costs in Canvey Island.

“Even those who do have the money can’t buy a house there because there’s such a shortage,” said Gross, who supports Brexit even though it caused his outdoor toy business to tank. 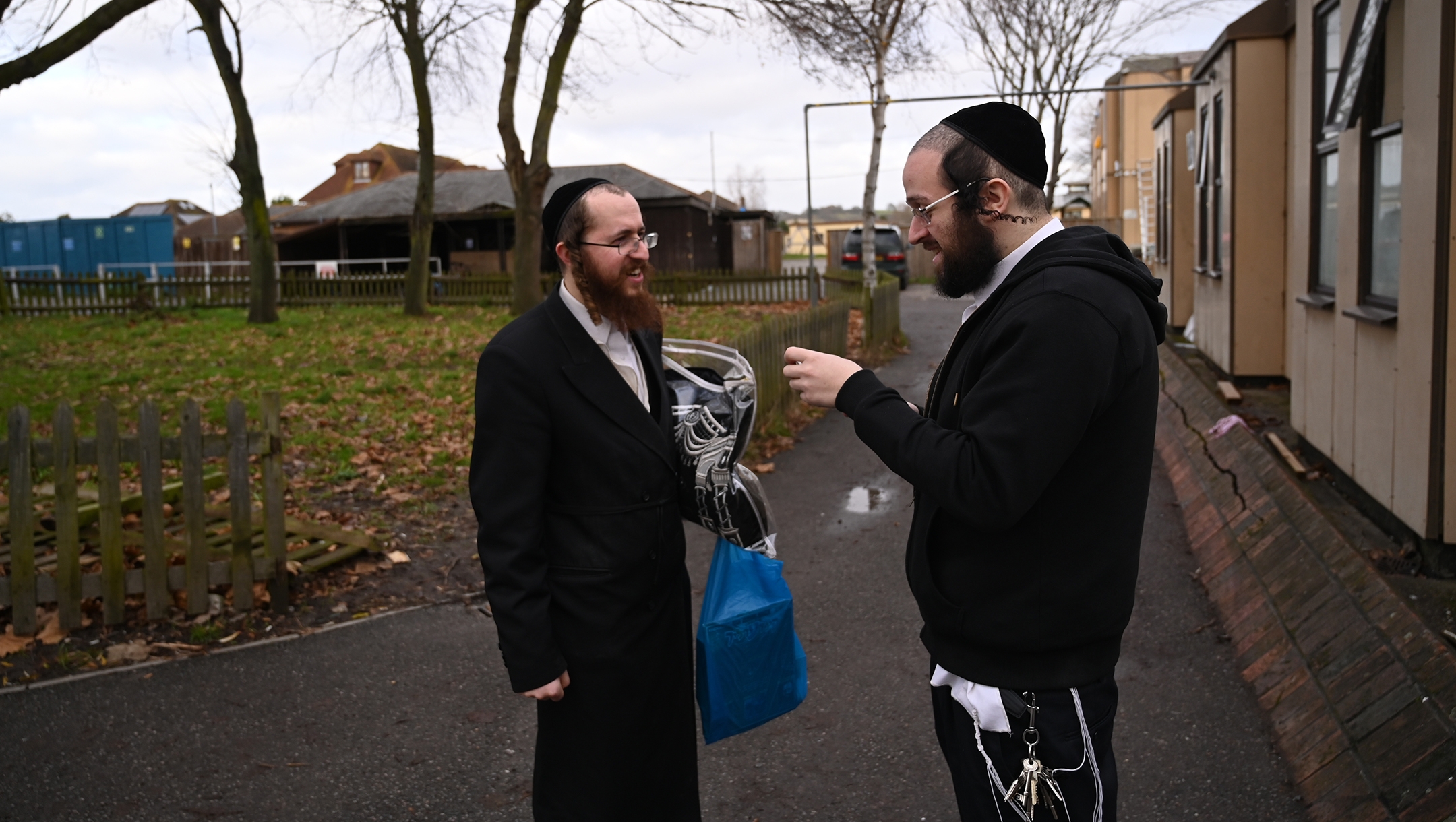 Uncertainty around Brexit caused the British pound to weaken against the dollar, hurting his profits, he said.

“But Brexit is still the right thing to do for this country,” he said.

Friedman and Gross were members of a group of activists who decided to band together and establish a new community in a more affordable market that is still near London.

This overflow from Stamford Hill reflects a major demographic development in British Jewry. Haredim are projected to become that minority’s largest group by 2031, according to a 2015 report by the Institute for Jewish Policy Research. That year, haredi births accounted for 47 percent of all Jewish births.

The non-haredi Jewish birthrate in the United Kingdom is 1.98 children per woman, only slightly above the national average, according to the report. Haredim typically have at least four children and a much smaller rate of assimilation.

The beating heart of the Jewish community of Canvey Island is the yeshiva, the local name for a Jewish community center built inside a former school. The yeshiva is located about a mile north of the city center, with its suburban strip mall and shoulderless, patchy roads whose sidewalks are often cluttered with merchandise belonging to the area’s many small construction firms and body shops.

The community center has a kosher convenience store, a synagogue and an events hall that is by far the prettiest space in the otherwise decaying building. There are also classrooms for the community’s approximately 350 children. 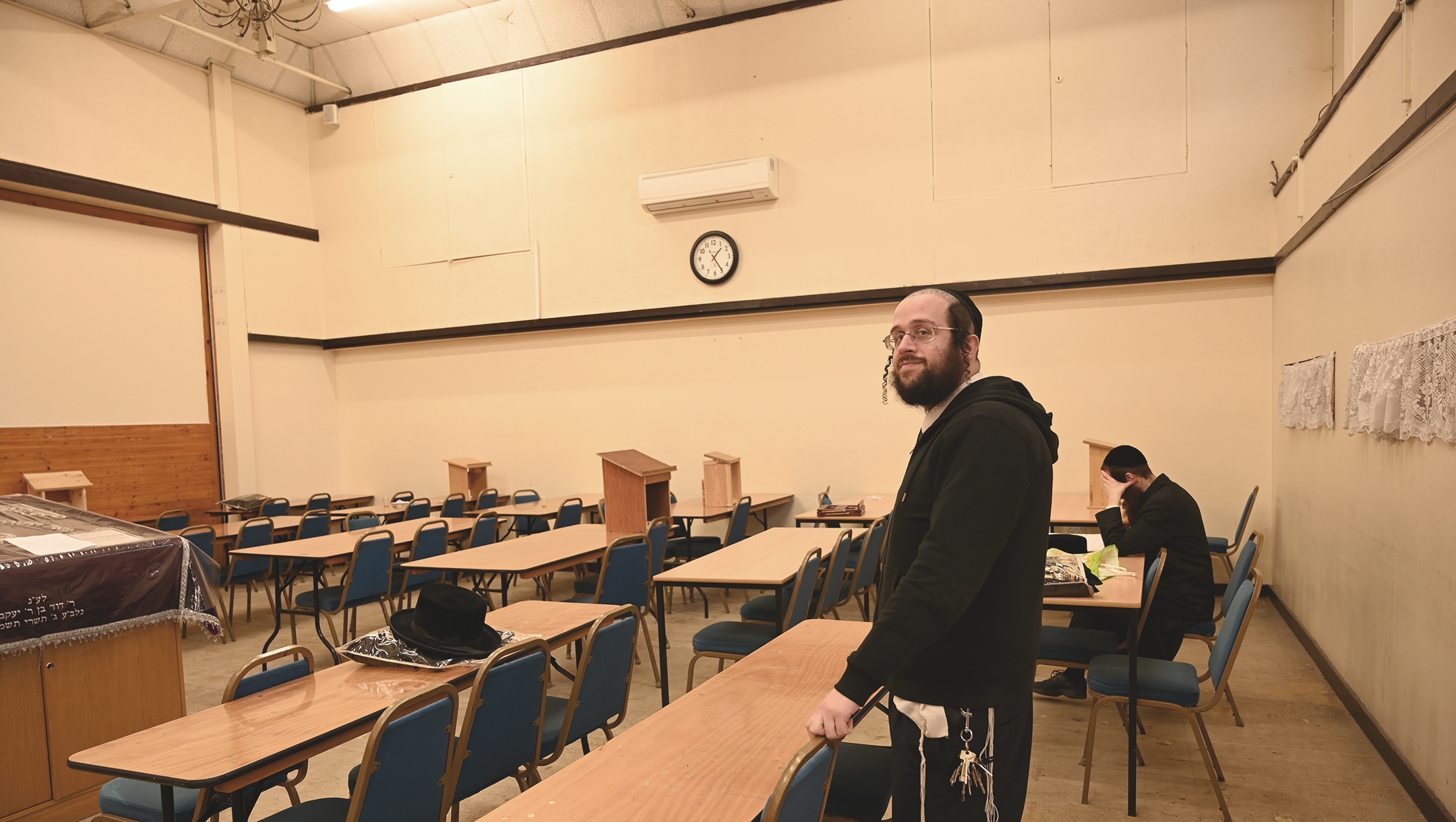 Jacob Gross at the yeshiva and synagogue in the London area’s Canvey Island, Dec. 13, 2019. (Cnaan Liphshiz)

On Shabbat afternoon, many haredi children play on the quiet streets bordering the yeshiva.

Officially, the children are all home-schooled. Canvey Island does not have a Jewish school, an amenity whose establishment would require considerable red tape and government oversight. Several haredi schools are facing closure for their alleged failure to teach sex education, evolution and other core requirements.

In practice, the yeshiva compound functions as a gender-segregated school, although the classes are called clubs. The place also has a mikvah, a ritual bath. Canvey Island, however, does not have a rabbi. The community is still looking for a suitable candidate, Gross said.

Last month, a fire damaged part of the yeshiva center: One of the students forgot to extinguish the Hanukkah menorah. The blaze was extinguished quickly and caused minor damage to the center, Friedman said.

The Jewish Community of Canvey Island, a registered charity that represents the Jewish population, arranged for swimming lessons at a nearby pool. Different time slots were set aside for boys and girls, Friedman noted.

“Life is great for the children here,” said a haredi resident who moved to Canvey Island and identified himself only as Shaul. “They can play outside, leave their bikes unlocked. It’s a totally different world to London.” 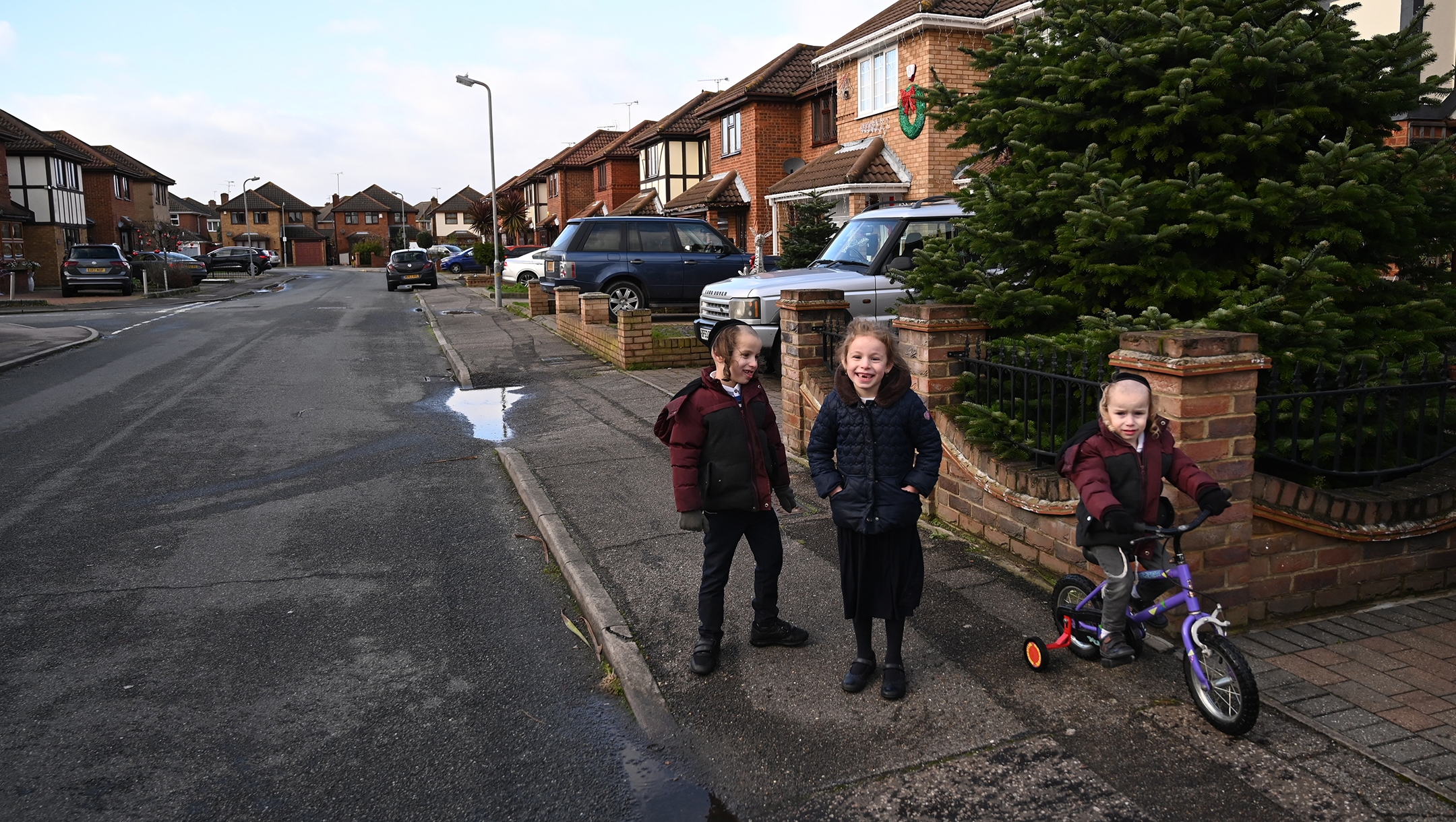 Shaul, his wife and five children moved from Stamford Hill three years ago. They were living in a two-room apartment, he said. “I just love the sea breeze,” he said on a sunny afternoon last month.

To be sure, Canvey Island is one of several locales in the United Kingdom where haredi communities from London have settled in recent years in search of affordable housing.

But in the London area, Canvey Island is one of a kind.

“People can still work there and live here,” Friedman said. “They can still remain part of family life in Stamford Hill.”

With more Jews expressing an interest in moving to Canvey Island, the local Jewish community has taken precautions to avoid this trend of driving up market prices, Gross said.

“There’s a committee. There’s a strict limit on how much we allow newcomers to bid,” Gross said.

Supply is rooted in local baby boomers reaching retirement age and selling assets in Canvey Island to buy smaller apartments now that their children have moved out, Friedman explained.

“It means there is availability,” he said, “and room to grow.”