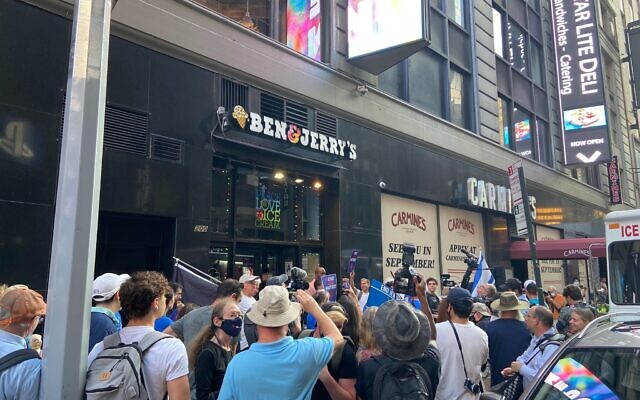 Pro-Israel activists protest outside of a Ben & Jerry's shop in Manhattan on Aug. 12, 2021. (Jacob Magid/Times of Israel)
Advertisement

Shabbat shalom, New Yorkers — all 8.8 million of you, according to the Census!

With the spread of the Delta variant, Jewish schools have returned to debates about masks and vaccines.

A diverse coalition of community groups will mark the 30th anniversary of the Crown Heights riots and subsequent reconciliation efforts with a festival in the Brooklyn neighborhood on Sunday.

“My Unorthodox Life” is hardly the first entertainment to feature the gap between Orthodox and secular Jews. Beginning in 19th-century Eastern Europe, writes film scholar Shaina Hammerman, Jews and antisemites alike used “fashion and ridicule to signal the divide between the unmistakably religious and the ambivalently secular.”

Teachers and parents can help close the “opportunity gap” in disadvantaged neighborhoods by working together. This week’s Torah portion reinforces that idea, writes Rabbi Elchanan Poupko, by making sure that teachers are part of the communities they serve.

Sony Pictures Television and “Jeopardy!” announced that actress Mayim Bialik will host some of the game show’s new primetime specials. There have been plenty of Jewish moments on “Jeopardy!” over the years; name the event below which did NOT happen. (And please answer in the form of a question.)

Join Haim Watzman, the leading Israeli translator of Hebrew non-fiction into English, and British-Nigerian-Israeli writer Akin Ajayi, co-founder of The Tel Aviv Review of Books, for a discussion of the translator’s responsibility and what it is like to be on the opposite side of the divide, having an original work of his own translated into Hebrew. Register here for this National Library of Israel event. Sunday, 1:00 p.m.

Photo, top: Pro-Israel activists protest outside of a Ben & Jerry’s shop in Manhattan on Aug. 12, 2021. (Jacob Magid/Times of Israel)