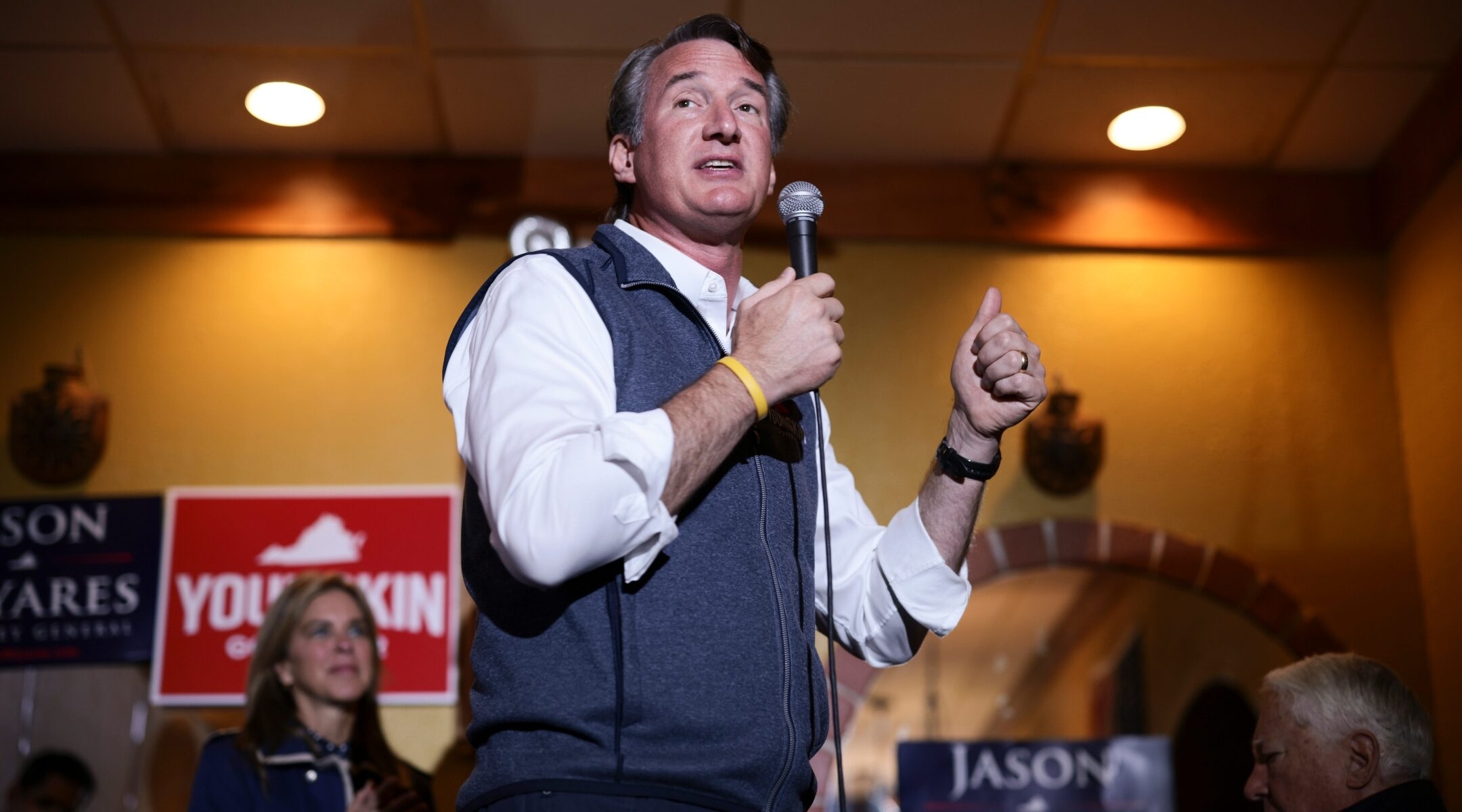 (JTA) — Demonstrators posed as the antisemitic white supremacists who led a deadly rally in Virginia in 2017 in a stunt protest against the state’s Republican candidate for governor, a sign of the increasing role charges of antisemitism are playing in the close race.

The protest Friday against Glenn Youngkin, who is running for governor against former governor Terry McAuliffe, was organized by the Lincoln Project, a group of anti-Trump Republicans. Youngkin and other Republicans condemned the protest as exploiting tragedy. Jewish Democrats called it “inappropriate.” The election is Tuesday.

Democrats have made allegations that Republicans are tolerating and at times advancing antisemitism within their ranks a key charge in the race.

Youngkin embraced Donald Trump ahead of the primaries but has sought to distance himself from the former president since becoming the nominee. Trump remains popular among the GOP base but is broadly unpopular in Virginia. In one of the most notorious episodes of his presidency, Trump equivocated about condemning the deadly neo-Nazi march in the state, saying there were “very fine people” on both sides of the events of the day.

In a statement, the Lincoln Project said the protest was intended to remind voters of “what happened in Charlottesville four years ago, the Republican Party’s embrace of those values, and Glenn Youngkin’s failure to condemn it.”

Youngkin told a talk radio host Saturday that the stunt should backfire and that McAuliffe “owns this.”

“For anybody to use white nationalism and racism as a campaign ploy is absolutely disgusting,” said Youngkin, who has said that as governor he would establish a “Holocaust, Genocide and Anti-Semitism Advisory Commission” and would seek passage of legislation endorsing the International Holocaust Remembrance Alliance definition of antisemitism.

Five protesters posed near a Youngkin bus at a campaign event in Charlottesville wearing the khaki trousers and white shirts typical of one of the white supremacist groups that joined the 2017 rally. They also carried tiki torches, which the 2017 marchers carried, terrorizing Charlottesville’s residents the night before the rally.

Before the Lincoln Project released its statement, a photo of the protesters stirred confusion on social media, with Republicans and Democrats accusing each other of inspiring or organizing the protest.

The protest has extra resonance now as a high-profile civil lawsuit trial is underway in Charlottesville. A number of the victims of the violence in 2017 are suing the groups and individuals who allegedly organized the rally.

Democrats have focused their allegations of Republican antisemitism on Virginia’s north, where there is a substantial Jewish population in Washington D.C.’s suburbs. Charges of antisemitism have surfaced against at least three Republicans running for the House of Delegates as well as against Youngkin himself.

Rep. Elaine Luria (D-Va.), a Jewish member of the House of Representatives from Virginia Beach, called Youngkin out earlier this month for comments he made at a campaign event accusing George Soros of surreptitiously planting far-left activists on local school boards. Soros, a liberal Jewish billionaire who is frequently the subject of antisemitic invective, is open about his political giving and is not involved in school board races.

“I call it out in my own party and I’m calling it out now,” Luria said in a tweet at the time. “Evoking George Soros as a shadowy funder is an antisemitic conspiracy theory. This is an unacceptable statement from Glenn Youngkin.”

Democrat Eileen Filler-Corn, who is the first Jewish and first woman speaker of the House of Delegates, earlier this month joined Doug Emhoff, the first Jewish spouse of a vice president, at a Jewish Democratic fundraising event in northern Virginia where they invoked rising antisemitism as a key reason to vote for Democrats in the state’s governor’s race as well as in next year’s midterms.

The Jewish Democratic Council of America has joined the Lincoln Project in running two web ads aimed at northern Virginia’s Jewish voters, emphasizing antisemitism as a threat that they allege Republicans are doing little to counter. It has also run phone banks targeting Jewish voters in the state. One of the phone banks was preceded by a pep talk by Dan Helmer, a Jewish state delegate whose opponent depicted him in a mailer as rubbing his hands while he contemplated piles of gold coins.

The JDCA in a tweet called on Youngkin to “denounce this gross behavior,” referring to the tiki-torch-bearing protesters. The JDCA deleted the tweet after the Lincoln Project made its statement.

JDCA CEO Halie Soifer told the Jewish Telegraphic Agency that the Lincoln Project stunt was “inappropriate” but said the Youngkin campaign was to blame for allowing antisemitism to feature in the race.

“The outrage over the Lincoln Project’s inappropriate campaign stunt should be redirected to Glenn Youngkin and the Virginia GOP’s embrace of right-wing extremism, as well as Youngkin’s repeated use of antisemitic tropes,” she said.

Republicans also have at times made antisemitism an issue. A Virginia state delegate who accused Israel of being behind “fossil fuel wars” drew GOP condemnation; the delegate made his comments after being defeated in a Democratic primary and will no longer be in the legislature come January.

Youngkin weighed in on Twitter when Republicans slammed Vice President Kamala Harris for not immediately objecting when a student at a Virginia university told her Israel committed genocide. “When I’m governor, there will be no place for anti-Semitism in Virginia,” Youngkin said.