Max Miller, a Jewish former Trump aide, was headed for a House seat in Ohio. Then his district disappeared. 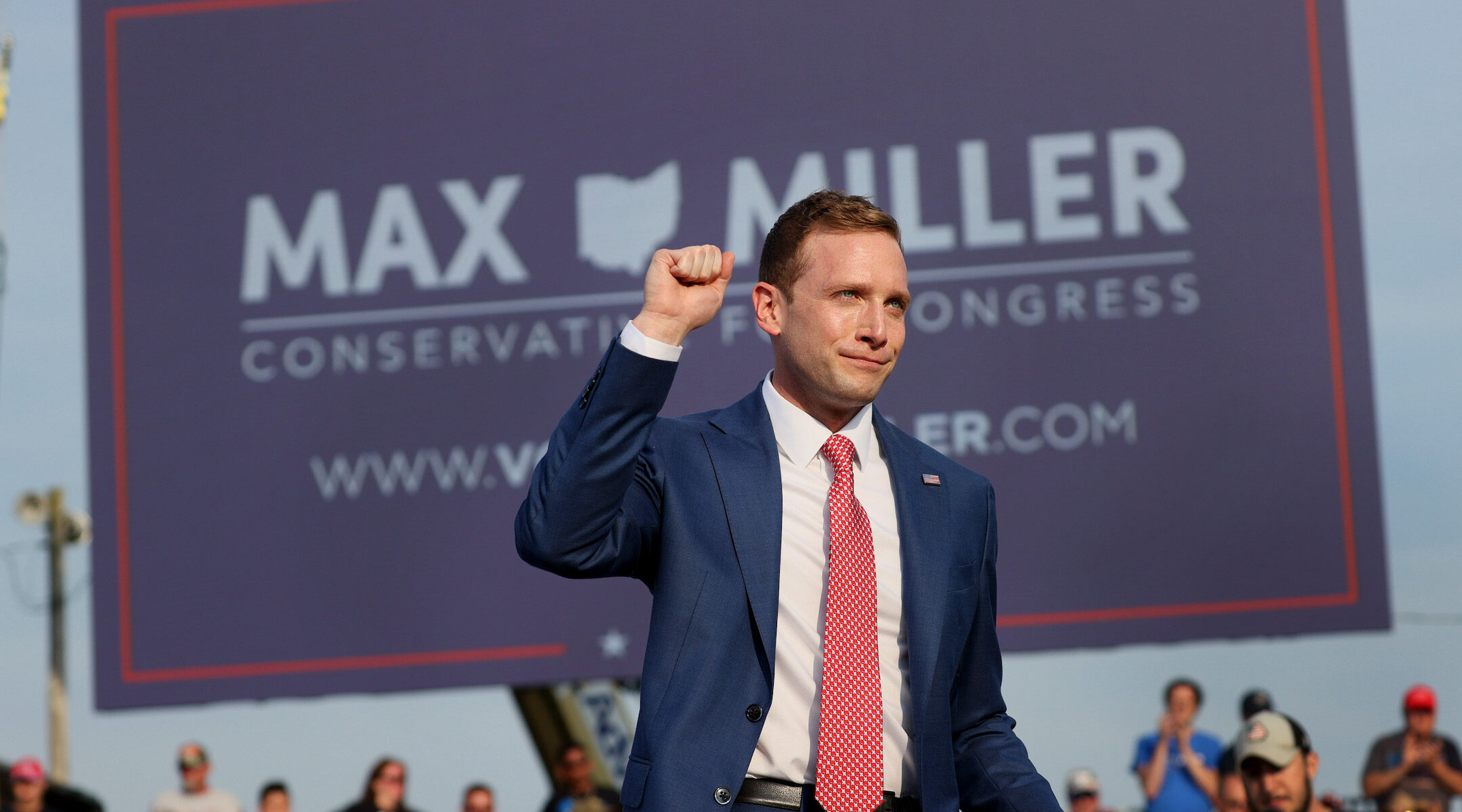 (JTA) — Max Miller, a 32-year-old former Trump aide running for a congressional seat in Ohio, is finally getting the buzz of media coverage that candidates crave in under-the-radar district races. It’s just not exactly the type of press he would like.

Miller, the scion of two well-known Cleveland Jewish families, is running for a House seat in the state’s newly defined 13th district. But he has mainly been in the news in recent months for two reasons: allegations that he physically abused his former partner Stephanie Grisham, a fellow Trump aide; and the fact that he was subpoenaed by the House committee investigating the Jan. 6 riot at the Capitol.

Miller’s unusual trajectory and the fact that he was forced to switch districts from a solidly red one — previously held by Rep. Anthony Gonzalez, a retiring moderate who came under intense pressure after voting to impeach Donald Trump — to a purple one make him a Jewish candidate to monitor in the closely-watched buildup to the pivotal 2022 midterms.

Here’s what to know about the candidate — who is of no relation to Stephen Miller, another former Jewish aide to Trump.

Miller, 32, is a son of Cleveland’s two most prominent Jewish families: The Ratners and the Millers.

The first three photos in a Cleveland Plain Dealer pictorial retrospective published after Miller died in 2019 at 97 are of Miller posing with three Israeli prime ministers: Menachem Begin, Golda Meir and Ariel Sharon.

Sam Miller’s first wife, Ruth Ratner, was the daughter of Leonard Ratner, who was also among the founders of Forest City Enterprises in 1920.

Max Miller’s parents, Abraham and Barb Miller, give to numerous Jewish causes; Barb Miller has been heavily involved for years in The Ratner School, a Jewish school that emphasizes diversity, and which Max attended. She likes using the term “tikkun olam” to describe her giving philosophy. The term, which means “repair the world,” is most often associated with liberal Jewish causes.

Abraham Miller runs an apparel business and has given money to candidates of both parties, including Josh Mandel, the Republican former state treasurer now running for Senate.

Abraham’s brother, and Max’s uncle, is Aaron David Miller, a former Middle East peace negotiator who writes about Israel and other politics for the likes of The Washington Post and The New York Times. In the think tank world, where he is prominent, he was sharply critical of the Trump administration’s foreign policy.

From a happenstance start to the Trump campaign

A Politico profile of Miller, posted in July, is the only in-depth study of the candidate and has become the central text for Cleveland Jews seeking to understand him. Jewish Clevelanders who asked not to be named for this article quoted passages of it by heart.

Miller seemingly fell into politics by happenstance. In the summer of 2015, when Miller was 26, Sen. Marco Rubio, then considered a frontrunner for the Republican presidential nomination, needed a driver for a midwestern tour. His campaign’s deputy finance director, Eli Miller, reportedly said: “I got a cousin.”

Max Miller, a Marine Corps reservist, was young, fit and game, ready to move massive pieces of furniture. He had a knack for setting up venues so everything was in place when the candidate arrived. After Rubio dropped out of the race in the spring of 2016, Miller’s skills got him a spot on the Trump team.

His loyalty and his good looks — Trump liked to say Miller was from “central casting,” the reality TV star’s highest compliment — got him a similar job in the Trump White House, and then again in the 2020 campaign. He joined Trump for his notorious June 2020 stroll to a church across the street from the White House, after troops used violence to clear out Black Lives Matter protesters. He’s proud enough of it that he posted photos from the day on his campaign Twitter feed this past June.

Miller became a clear Trump favorite — one of the president’s last acts was to name him and two other aides to the U.S. Holocaust Memorial Council.

Miller is not expansive  — yet — on policy. His website issues page is barely over 300 words, hitting right-wing GOP benchmarks like opposition to critical race theory. But Trump has endorsed Miller, who embraces many of the policies that the former president championed, including a border wall.

But Miller does get to his Jewish identity: He “demands that Congress stand up to America’s enemies, like the Chinese Communist Party and Hezbollah, and urge support for our allies, such as Israel,” the page says. “As a Jewish-American himself, Max will fight the anti-Semites like Ilhan Omar in Congress and demand that their enablers like Nancy Pelosi hold them accountable.”

He is referring to Omar, a Minnesota Democrat who backs Israel boycotts, and the House speaker.

Father and son disagree on immigration

In 2016, before Trump was elected president, Miller’s father told New American Economy, a think tank that favors immigration reform, that he favored the immigration policies that Trump has made a point of reviling.

“If we don’t continue inviting immigrants, there will be no labor for American businesses,” Abraham Miller said.

The article noted that Miller’s workforce is “largely Chinese-born.”

“The way people say ‘immigrant,’ it sounds so harsh,” Abraham Miller added. “But we were all immigrants at one time. I hope when our grandparents and great-grandparents came here, they had employers who cared about them as well.”

Max Miller, who features a childhood photo with his parents on his campaign page, says he “will fight to stop illegal immigration, restart construction of the southern border wall, and strongly oppose amnesty.”

This sentence stands out, considering his dad’s workforce: “Growing up in Ohio, Max saw first-hand the havoc wreaked on middle America’s middle-class by politicians who abandoned them in favor of cheap, exploitative foreign labor.”

His chances of winning have taken a hit

Until last month, Miller had been running to replace Gonzalez in a solidly Republican district without any serious primary challengers. But that district, the 16th — home to hardly any local Jews — has been phased out of existence.

Now Miller has been forced to compete in the much more competitive 13th district, currently repped by prominent Democratic lawmaker Tim Ryan, who is now running for Senate.

Since then, the more moderate Republican Shay Hawkins, a former aide to Sen. Tim Scott, R-S.C., has entered the race.

A lover accused him of abuse

The Politico profile revealed that Miller’s romantic partner, then-White House Press Secretary Stephanie Grisham, accused him of hitting her during their turbulent breakup last year. It also uncovered a history of allegations of violence against Miller from his high school years.

Miller adamantly denied the allegations, which at the time were tempered somewhat by Grisham’s refusal to comment.

That changed in October when Grisham confirmed the allegations in a book she published about her White House years. Miller immediately sued her for defamation and sought a court injunction to keep her from talking about the allegations. The injunction failed, and Grisham is talking.