Who are Ukraine’s Jews, and how is Russia’s invasion affecting them? We explain. 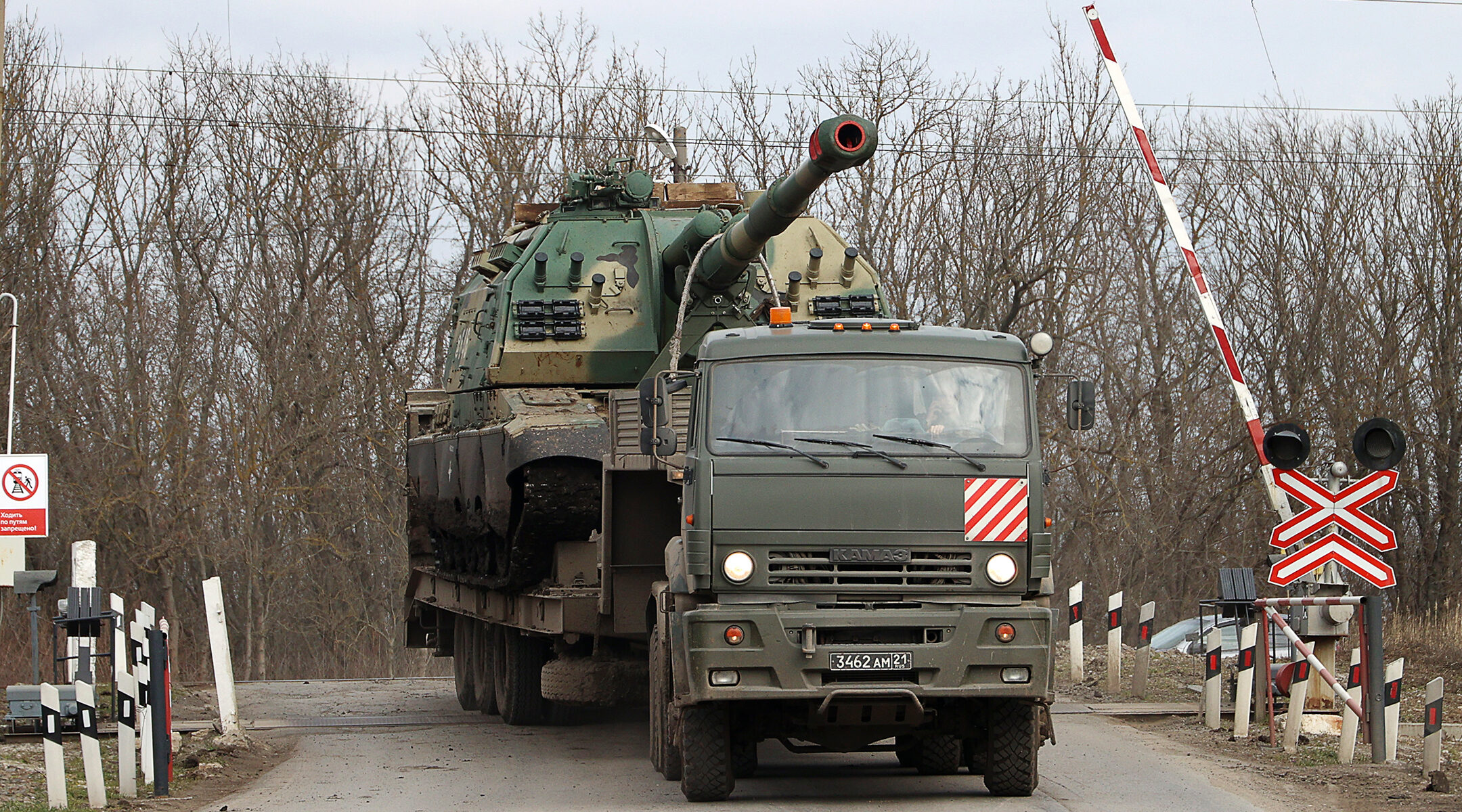 (JTA) — All of the posturing and fears and hypothesizing became reality early Thursday morning in Ukraine, as Russia launched a full-scale armed invasion by land and sea.

Tens of thousands of Jews live in Ukraine, making it home to one of the world’s largest Jewish communities — one with a complicated history, tainted by persecution and upheaval, that is tangibly affecting their response to the attack.

Here’s a breakdown of who they are, where they live and what they are experiencing.

We’ll add to this explainer as we learn more. What do you want to know about Ukraine’s Jews right now? Let us know.

After weeks of ominous reports on Russia’s plans to attempt to annex parts of Ukraine — a former member of the Soviet Union that has over time grown close to NATO and Western powers, a fact that infuriates the Kremlin — Russian President Vladimir Putin announced on television early Thursday that he had initiated a “special military operation.” As he did so, explosions were heard in the capital Kyiv and several other large Ukrainian cities.

This is the second time in the past decade that Putin has invaded parts of the country — in 2014, Russia annexed territory in the Crimea region, kickstarting months of fighting near the two countries’ borders. But early signs show that this new conflict could quickly progress to a larger-scale affair.

Explosions and Russian troops have now been reported all the way from Crimea in the east to the Lviv area in the west, and Ukrainian officials are estimating dozens of soldiers and civilians are already dead. Most analysts are calling the escalation Europe’s most significant armed conflict since World War II.

How many Jews live in Ukraine today?

This is a difficult question to answer with specificity, complicated by the cultural makeup of Ukrainian Jewry and its history. A 2020 demographic study of European Jewry puts the number of Ukrainians who identify as Jews at 43,000. But some estimates of people with Jewish ancestry quadruple that number.

Despite centuries of antisemitism and pogroms that condensed Jewish populations into pockets of Eastern Europe, such as the Pale of Settlement, which included a large portion of modern Ukraine — and was known for its shtetls, and as the setting of “Fiddler on the Roof” — it is estimated that over 1.5 million Jews lived in what is now Ukraine on the eve of World War II.

Approximately 1 million of those Jews were killed in the Holocaust, but a 1989 census estimated that close to half a million lived in Ukraine in 1989, before the dissolution of the Soviet Union. Under Soviet rule, Jews were persecuted and additionally denied the right to emigrate, forced to hide much of their religious practice in a society rife with antisemitism.

After the Soviet Union collapsed, close to 80% of those Jews left for Israel and elsewhere. Many of those who remained are elderly and poor, and others are disconnected from their Jewish heritage, perhaps from the decades of persecution.

For example, the 2020 demographic survey estimated that besides a “core” population of 43,000 Jews, around 200,000 Ukrainians are technically eligible for Israeli citizenship, meaning that they have identifiable Jewish ancestry. The European Jewish Congress says that number could be as high as 400,000.

We’ve covered attempts by international Jewish organizations to care for the country’s remaining Jewish population, to revitalize younger generations of Ukrainian Jews and even to attract some to Israel.

Where do most of Ukraine’s Jews live?

Most of Ukraine’s Jews live in the country’s largest cities, but some, especially elderly ones, live in smaller cities and scattered impoverished villages. So this list — which contains estimates of people with Jewish heritage, some provided by the communities themselves — is not comprehensive. Because Russia’s attack has taken aim at the entire country, all Jewish communities face exposure to violence and the consequences of war.

Kyiv: Ukraine’s capital city of close to 3 million people is home to about 110,000 Jews and half a dozen active synagogues.

Dnipro: This eastern city, which was off limits for unauthorized civilians during the Communist era because of its multiple military complexes, now has about 60,000 Jews, according to communal figures. It houses kosher restaurants, a synagogue, a mikvah and multiple Jewish-owned businesses, and in 2012 construction finished on a 22-story building that’s shaped like a menorah.

Kharkiv: This industrial city near the Russian border is one of Ukraine’s largest, and about 45,000 Jews call it home, according to the community’s own statistics. 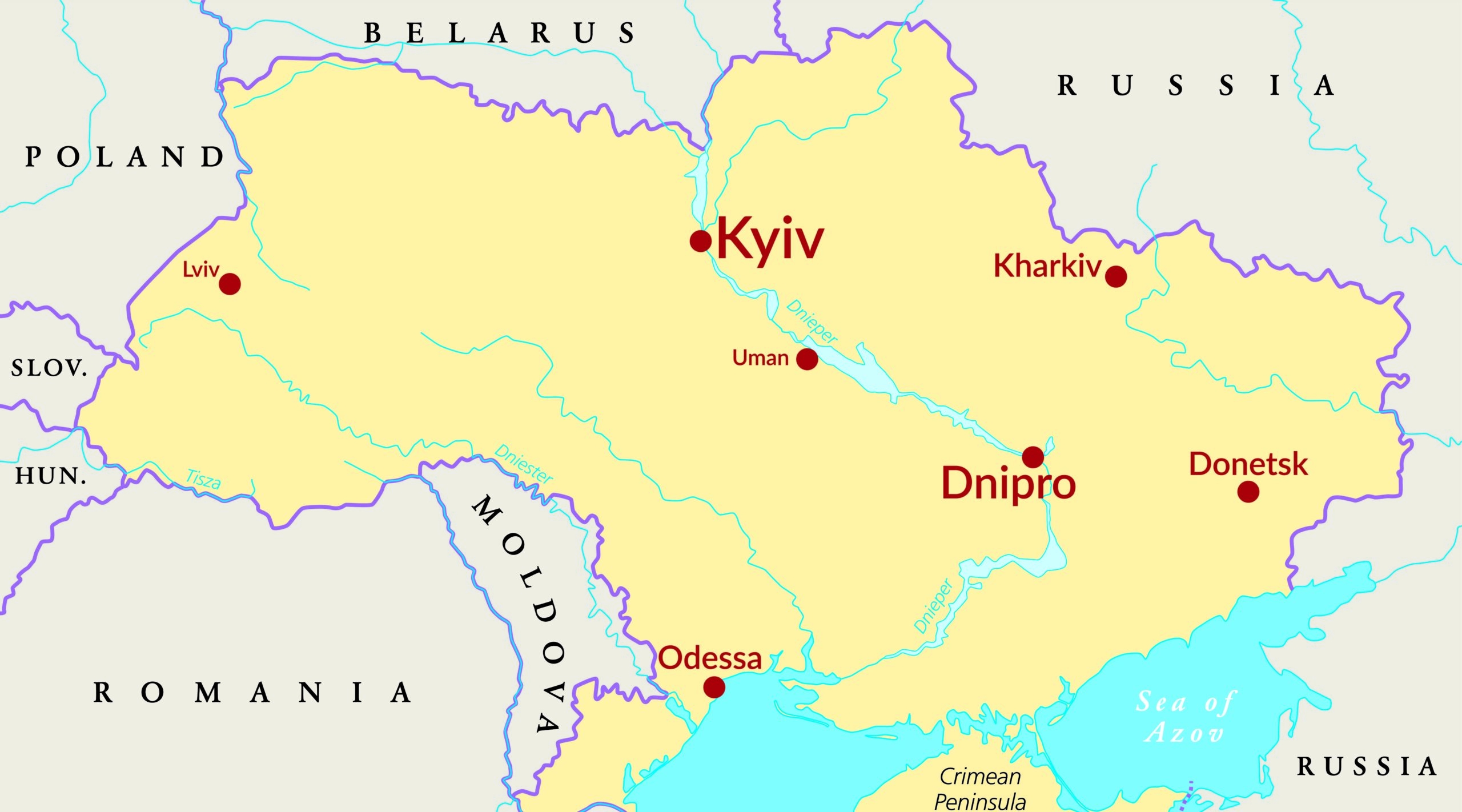 This map shows the distribution of the major Jewish communities in Ukraine. (Getty Images/Design by Grace Yagel)

Odessa: This southern port city of about a million people also has 45,000 Jews, according to communal statistics, four active synagogues, a Jewish museum, two Jewish community centers and no fewer than a dozen Jewish schools or kindergartens. It also is home to four orphanages for Jewish children, run by the Hasidic Chabad-Lubavitch movement. In the late 19th century, Jews made up over a third of the city’s population.

Uman: This small city houses the grave of the 18th-century Hasidic Rabbi Nahman of Breslov, which attracts ten of thousands of Hasidic Jews in an annual tribute pilgrimage. But a few hundred Jews, mostly Israelis, now live there year-round.

Lviv: This western city, near Poland, is home to a few small Jewish communities of 100-200 people each.

How are they responding to the violence?

Given their traumatic history, Ukrainian Jews are feeling more than a little frightened at the possibility of a protracted war.

In Odessa, Rabbi Shlomo Baksht explained to his orphan children that “there was a war but that they are not being targeted.” He told our Cnaan Lipshiz that some were assured by that, “but others not really and the fear stayed in their eyes.”

Last month we reported that some were getting their suitcases ready. But due to the widespread nature of the violence, erupting from all sides — which led Ukrainian airports to cancel all commercial flights — many local Jews, like non-Jews, are being forced to stay put for now.

For many of the elderly experiencing poverty, anxiety and seclusion already worsened by the COVID-19 pandemic, the situation will bring new physical and psychological challenges, said Amos Lev-Ran, a senior employee of the former-Soviet-Union division of the U.S.-based American Jewish Joint Distribution Committee charity, or JDC, which is a major provider of care to needy Jews in Ukraine.

The JDC has already been stepping up its contributions in recent months, adding $4.4 million in aid spending since November.

Some others — mostly of a generation removed from the Soviet Union era — have assimilated into Ukraine’s patriotic culture, and want to protect their homeland at all costs.

That said, thousands of Ukrainians are also fleeing into nearby countries such as Poland and Hungary. Last weekend, a letter that Bathsheba Crocker, the U.S. ambassador to the United Nations, sent to the U.N.’s high commissioner for human rights began circulating. In it, Crocker wrote that the United States believes that in the aftermath of an invasion, Russia will look to target a list of specific people “who oppose Russian actions” through “killings, kidnappings/forced disappearances, unjust detentions, and the use of torture.”

On that list, Crocker wrote, alongside political dissidents, LGBTQ activists and others, are “vulnerable populations such as religious and ethnic minorities.” That prompted some on social media to speculate whether that includes Jews.

There are over 200,000 Jews in Ukraine today. When the intel says Putin plans to execute “religious minorities” in Ukraine, let’s be crystal clear on what actually means.

We don’t yet know whether this list is real and what actions, if any, will befall those who might be on it. But we do know two things: Putin has carried out the actions Crocker outlined for years against his political opponents and anyone prominent who protests his autocratic reign.

He has also strived to project a pro-Jewish image on the global stage, cultivating close relationships with Chabad rabbis and Israeli leaders, including former Israeli Prime Minister Benjamin Netanyahu.

Still, not all Russian Jews are convinced by Putin’s gestures — one prominent case a few years ago involving the expulsion of multiple rabbis from the country, for alleged national security reasons, left many questioning his motives.

Keep reading to learn the other ways Putin instrumentalizes Jewish — and Nazi — storylines to push an agenda.

Ukraine’s president is Jewish — here’s how that comes into play.

In the spotlight is Ukraine’s first-ever Jewish president, Volodymyr Zelensky, a 44-year-old political neophyte whose most recent job before being elected in 2019 was acting on comedic TV shows. Although not religious, Zelensky has begun referencing his Jewish identity and publicly proclaiming solidarity with Israel in recent years.

Despite winning the 2019 election in a landslide — after being hit with some antisemitic attacks during the campaign — Zelensky’s approval ratings have plummeted over time as his image as a maverick reformer determined to tackle the country’s corruption problem has thinned.

At the same time, rising rates of antisemitism, at times connected to rising rates of hypernationalism, have become an issue in Ukraine over the past decade. Russia, likely seizing on this fact, has made antisemitic disinformation a key component in its accompanying online proxy war against Ukraine, and its efforts to galvanize support for war among citizens at home.

For example, during the 2014 Maidan Revolution, a series of violent protests that ousted former Ukrainian President Viktor Yanukovych, a Putin ally, the Kremlin embarked on a disinformation campaign “to divide Ukrainians along ethnic and religious lines and delegitimize the Ukrainians by painting them as Nazis and fascists,” former JTA correspondent Sam Sokol explained.

“The Russians planted fake news stories about imaginary antisemitic incidents and allegedly engaged in antisemitic provocations,” said Sokol, author of “Putin’s Hybrid War and the Jews: Antisemitism, Propaganda, and the Displacement of Ukrainian Jewry.” “In response, the Ukrainians lobbed similar accusations against the Russians. The Jews found themselves used by both sides.”

The trend has continued — in his speech announcing the war, Putin compared Ukraine’s leadership to Nazis, something he has done repeatedly since 2014. (Ukrainian leaders have in turn continued to make similar accusations against their Russian rivals.)

“[The] goal is to protect people who have been subjected to bullying and genocide… for the last eight years. And for this we will strive for the demilitarization and denazification of Ukraine,” Putin said on his reasoning for the invasion.

Zelensky, who had family members die in the Holocaust, is particularly attuned to the rhetoric. On Thursday, the Ukrainian government’s official Twitter account shared a cartoon image Thursday morning that showed Adolf Hitler smiling and touching Putin’s cheek. “This is not a ‘meme’, but our and your reality right now,” the account wrote.

How is Israel involved in all of this?

On the diplomatic side, Israel has tried to balance the close relations it has to both Ukraine and Russia as the conflict has grown more heated. It’s a complicated series of connections — especially because Russia is a close ally of Syria, one of Israel’s foremost enemies — but until Thursday, Israeli leaders had not named Russia specifically in their statements on the conflict.

But Prime Minister Naftali Bennett, in a statement expressing solidarity with Ukrainians, stopped short of issuing a similar condemnation.

Israeli officials have also been promoting and preparing for increased immigration by Ukrainian Jews and their families to Israel, primarily through the Jewish Agency for Israel, a semi-governmental body for promoting this immigration, called aliyah, but also from Nativ, another agency with a similar mission that focuses exclusively on Jews in the former Soviet Union.

The Agency has been “flooded” with requests on Thursday. The International Fellowship of Christians and Jews, a pro-Israel philanthropic group, helped the Jewish Agency fly approximately 100 Jews out of Ukraine last weekend.