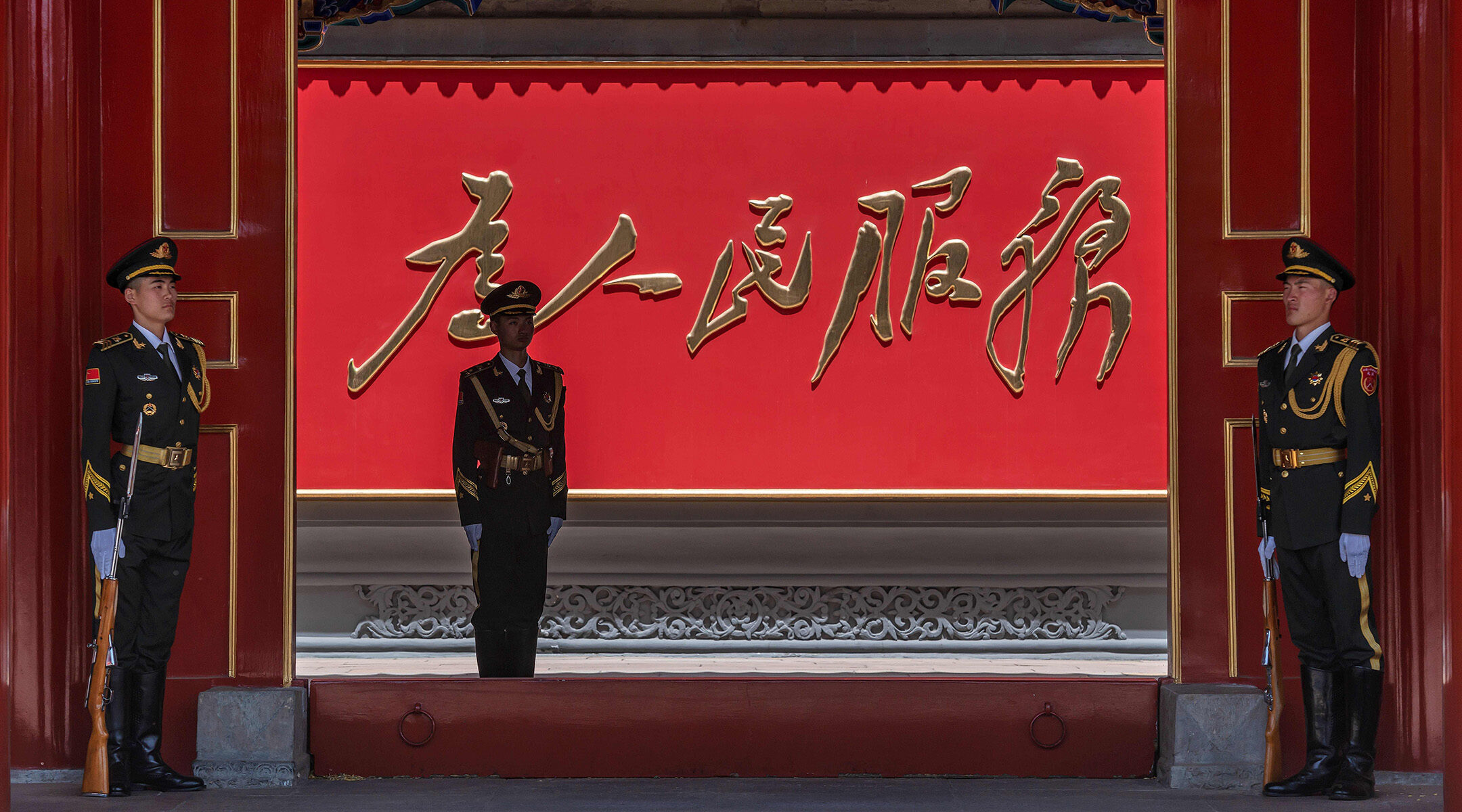 TAIPEI, Taiwan (JTA) – Two months ago, shortly after the Olympics began in Beijing, the U.S. Holocaust Museum took a shot at China for its treatment of the Uyghur minority group.

“At the #Olympics you’ll see a well-known tradition—the torch relay—which the Nazis used at the 1936 Olympics for propaganda purposes,” the museum wrote on Twitter. “Today, we witness how the Olympics can still be used to distract from atrocities, such as the persecution of the #Uyghurs.”

Days later, Chen Weihua, a columnist for the Chinese state-run media outlet China Daily, responded: “Shame on the Holocaust Museum. Are you saying Nazi Holocaust of Jews was nothing but vocational training? More than 30,000 Jews sought refuge in Shanghai during the war and this is now your appreciation to the Chinese people?”

Chen’s comments sparked outraged responses online and even made some headlines in American conservative news outlets. But the phenomenon — a Chinese official channeling the Holocaust and elevating China’s role in saving Jews who found refuge in Shanghai during World War II — was not new, experts say.

Several other countries, including Israel and the United States, often reference their Holocaust records for political clout. But as China’s relationship with the West continues to sour, state media and diplomats have increasingly used its Holocaust narratives to position China as a savior of Jews at a time when the rest of the world neglected them.

“Engagement with the Holocaust as a representation of bad European history, and the kind of bad representation of Europe, it’s certainly a way to construct China as a much more civilized place than Europe based upon the idea that it saved Jewish people during World War II,” said Mary J. Ainslie, a professor of communications at the University of Nottingham’s campus in Ningbo, China.

Russia’s invasion of Ukraine has offered the opportunity to advance that narrative. China has been walking a diplomatic tightrope as it has tried to balance its interests with both Russia and the West. But the country has definitively pushed and expanded on Russia’s “denazification” argument to rationalize the invasion, claiming that Ukrainian Nazis — trained by the United States — participated in the 2019 Hong Kong protests against China’s controversial law to extradite political dissenters.

Last week, the Global Times, a Chinese nationalist state media outlet, published a story claiming that an official WeChat account from the U.S. embassy in China glorified Ukrainian Nazis, by sharing an article about the Ukrainian Congress Committee of America on the Chinese messaging platform.

Chinese diplomats have also evoked the Holocaust in response to sanctions from European states over Beijing’s treatment of Muslim Uyghurs in the Xinjiang region. As China’s relations with Lithuania declined last year, foreign ministry spokesman Zhao Lijian wrote on Twitter: “In #Lithuania, there was once massacre of Jews in history. Today, racism remains a grave problem in the country, with Jews and other ethnic minorities suffering serious discrimination.” 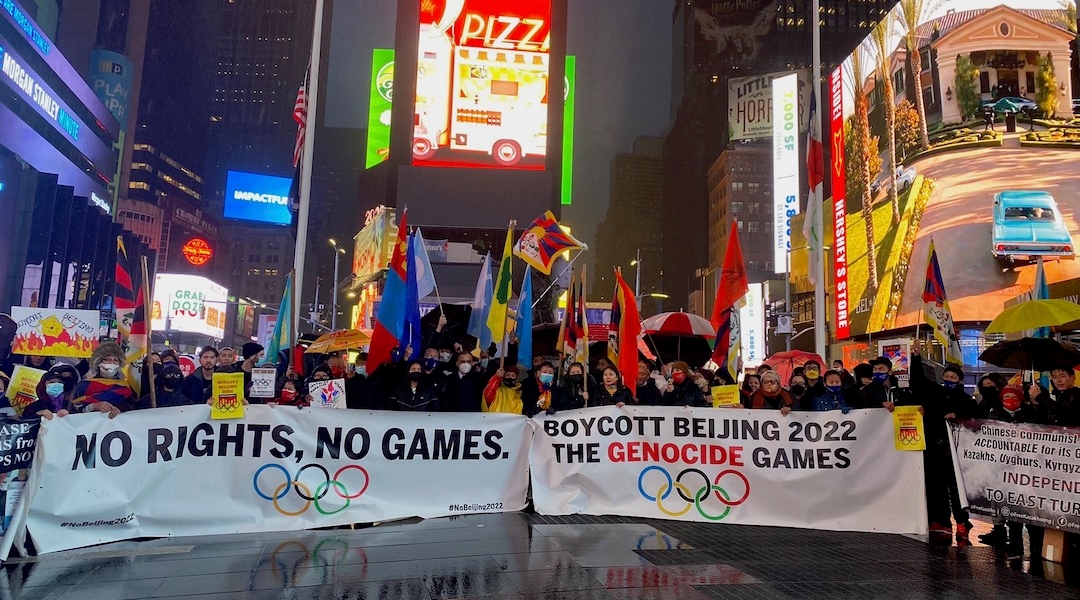 A march from the Chinese Consulate in New York City to Times Square, above, was meant to draw attention to human rights abuses against China’s Uyghur minority, Feb. 3, 2022. (Courtesy of #NoBeijing2022)

Since 2017, China has held a million Uyghurs — a mostly Muslim, Turkic-speaking ethnic group who live in the the western Xinjiang region — in what they call “reeducation” camps, forcing them to praise communism and learn Mandarin. Rape and suicides have been reported from the camps, and some observers have compared the compounds to Nazi concentration camps. Jewish activists around the world have been on the front lines of protesting the Uyghurs’ treatment.

The U.S. Holocaust Museum has joined in the criticism, but it has also witnessed an increased use of Holocaust comparisons around the world in the past few years “with concern.”

“The Holocaust should be remembered, studied, and understood so that we can learn its lessons; it should not be exploited for opportunistic purposes,” the Museum wrote in a 2019 statement. In 2021, a group of Holocaust survivors who volunteer with the Museum wrote an open letter asking the public to stop using the Holocaust as a means to promote other agendas.

“What we survived should be remembered, studied, and learned from, but never misused,” the letter read.

China’s Shanghai Holocaust narrative leaves out important facts that do a disservice to survivors, Ainslie said.

“The reason why the Jews of Shanghai were able to survive was not due to the Chinese state,” she said.

The current Chinese state — the People’s Republic of China (PRC) — did not exist until 1949. The city at the time had been ruled by several different powers under the Shanghai Municipal Council, Shanghai’s joint governing body at the time. But the influx of Jews arrived in 1938, as power over the city shifted from Chinese to Japanese hands.

“​​In short, the chaos created by the war in China made the Jewish refugees’ flight to Shanghai possible,” Gao Bei of the University of North Carolina, Wilmington, wrote in 2011.

The number of Jews China claims to have rescued — 30,000 — also differs from the number most scholars agree upon: around 20,000, according to the Shanghai Jewish Refugees Museum.

China began exhibiting a renewed interest in the Holocaust and Judaism after 1992, when China and Israel established official diplomatic relations. At the time, China’s main native Jewish group, a community of fewer than 1,000 in the city of Kaifeng, were able to practice their religion relatively openly and receive visits from Westerners who traveled there to teach them Hebrew.

In 2007, a museum commemorating the Shanghai Jewish refugees opened at the Ohel Moshe synagogue. In 2020, it expanded to more than double its previous size, likely a bid for better international recognition of the site, experts say. Since its opening, the museum has served as a platform for constructing links between Israel and the PRC, either cultural or economic.

The Kaifeng Jews have since been forced underground as a result of government repression of many religious groups.

“At all points, official Chinese interest in Jews and Jewish history and the Holocaust had a political connection with state policies,” Hochstadt said.

Israeli diplomats fully benefit from and engage with China’s Holocaust narrative, Ainslie said. Take a 2015 video as an example, in which former Shanghai refugees and Israelis, including then-Prime Minister Benjamin Netanyahu, thank the Chinese people for “their friendship and hospitality during our darkest hour.”

China has continued to grow closer with Israel in the past few years, even as the United States has raised concerns. China was Israel’s largest source of imports in 2021.

“The reason why the Jews of Shanghai were able to survive was not due to the Chinese state. That’s the importance. And of course, to actually not recognize that does a disservice to the survivors,” Ainslie says.

“[Conditions were] very, very tough…and to say that this was a benevolent act on behalf of the Chinese state, undermines all of that.”