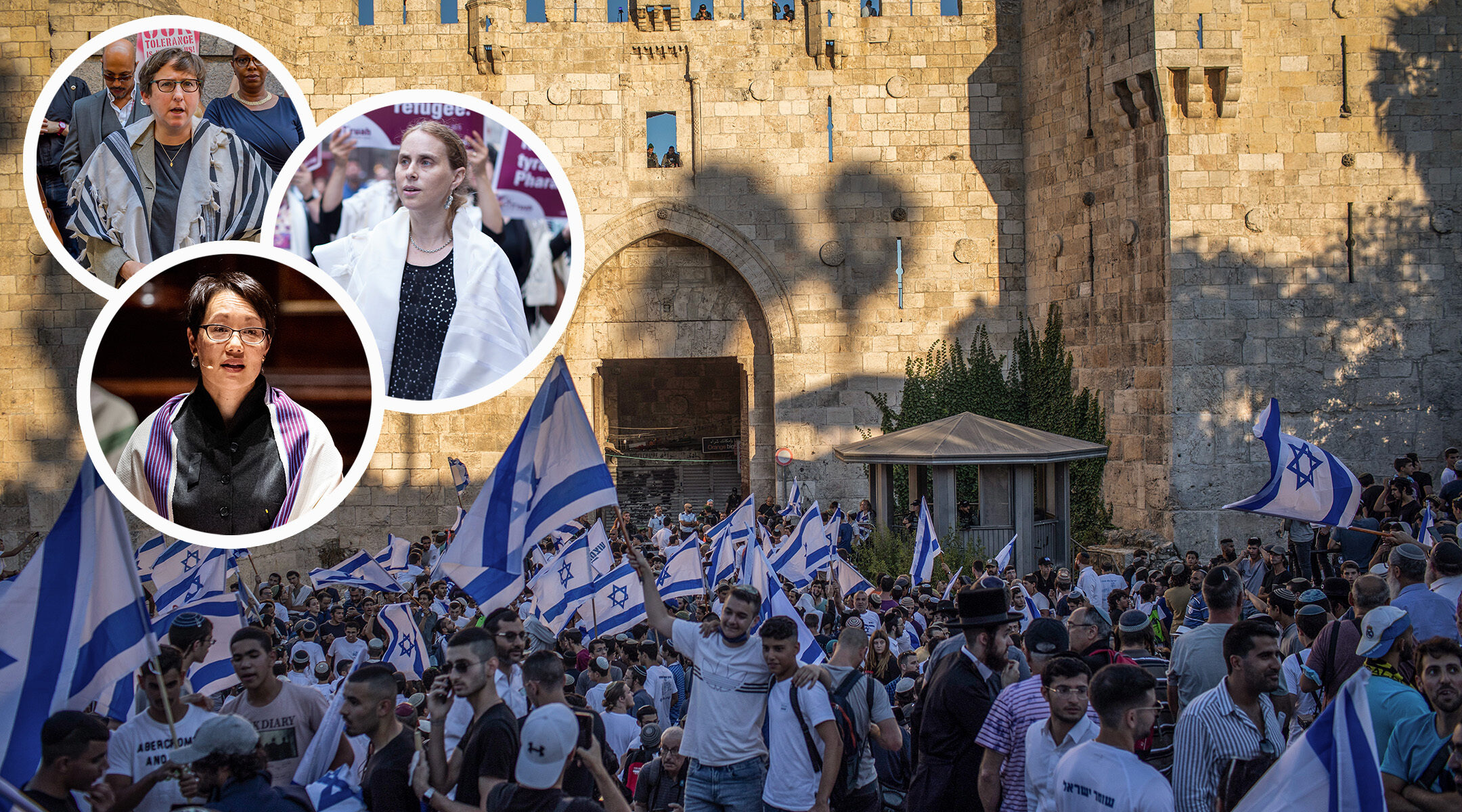 (JTA) – In the wake of last year’s round of deadly fighting in Gaza, a group of prominent rabbis in the New York area came to believe that a major American Jewish charity had indirectly fueled the violence.

In a letter to the charity, the 19 rabbis, including ones with national renown such as Angela Buchdahl, Sharon Kleinbaum and Amichai Lau-Lavie, pointed out that it was allowing tax-exempt funds to flow to Israeli right-wing extremists.

As a donor-advised fund, the $2.4 billion Jewish Communal Fund accepts donations from thousands of individuals and distributes the money according to their recommendations.

Some money, the rabbis said, is going to Lehava, a group known for their incendiary marches through Palestinian neighborhoods of Jerusalem involving participants chanting “death to the Arabs.” Lehava carried out such a march before fighting between Israel and Hamas broke out last year.

“We value robust debate within the Jewish community and appreciate JCF’s commitment to fund groups that represent a wide range of political positions,” the rabbis wrote in their letter, which they followed up with a request for a meeting. “However, incitement and violence are not legitimate political positions.”

The charity rebuffed the rabbis, declining the meeting request and ignoring their call to amend its funding practices and end payments to “organizations that support violence.”

Now, as new deaths are being tolled and far-right groups agitate once again — Lehava-affiliated lawmaker Itamar Ben-Gvir ascended the Temple Mount last week just ahead of Ramadan — the rabbis are going public with their plea.

The letter was organized by the human rights group T’ruah whose CEO, Rabbi Jill Jacobs, said recent events prompted all but one of the 19 signatories to come forward.

“Itamar Ben-Gvir has been escalating his provocations, and we are concerned that money going to Lehava [and others] will help to incite major violence,” Jacobs told the Jewish Telegraphic Agency. “We believe that donors who entrust their charitable donations to the Jewish Communal Fund should know that they are helping to subsidize violent extremists.”

Many of the signatories are known for their activism around social justice, and the group leans heavily progressive in terms of denomination. Only one rabbi who signed, Avraham Bronstein of the Hampton Synagogue on Long Island, leads an Orthodox congregation.

Perhaps the most prominent of the signatories is Buchdahl, the senior rabbi of New York’s Central Synagogue, among the largest Jewish congregations in the country. She made headlines at the outset of her career when she became the first Asian American to be ordained as a rabbi in 2001. Last year she was a “Jeopardy!” clue, and this year her name was in the news because she spoke on the phone with the gunman who held Jews hostage in their Texas synagogue. He had asked to speak to her because he was under the impression that Buchdahl was “the chief rabbi of America,” a title that does not exist.

Kleinbaum, meanwhile, leads Congregation Beit Simchat Torah in New York and is known for her LGBTQ advocacy. She was one of President Joe Biden’s picks for the U.S. Commission on International Religious Freedom. Then there’s Lau-Lavie, the spiritual leader of the hip downtown New York Lab/Shul NYC community, who is also a performance artist, an advocate for more inclusive practices around intermarriage and a scion to an illustrious rabbinic family.

In their June 2021 letter, the rabbis focused on charitable donations from the Jewish Communal Fund to another U.S. nonprofit, the Central Fund of Israel.

The latter organization has been attracting criticism for over a decade because it is used as a financial conduit by extremist groups in Israel when they solicit donations in the United States.

Besides Lehava, the Central Fund has been linked to groups such as Honenu, which gives money to Israeli Jews convicted of violent acts against Palestinians, and Im Tirtzu, which once released a viral video in which it labeled the leaders of four major Israeli human rights organizations “foreign agents,” predictably igniting a wave of death threats. The Central Fund also funnels donations to a West Bank yeshiva called Od Yosef Chai, whose rabbi was convicted last year in an Israeli court of inciting violence against Palestinians.

Critics such as Jacobs, the head of T’ruah, have long said that the Central Fund is abusing its nonprofit status. In 2015, Jacobs filed a complaint on behalf of her group with the IRS , which appears to have triggered an investigation by law enforcement officials.

Jacobs learned that the complaint had been picked up when she received an email from IRS Investigation Special Agent Dan McWilliams.

“I work very closely with the IRS personnel that work charity investigations full time,” McWilliams wrote in the email, which has not been previously reported. “I would like to speak to you about these organizations.”

He also wrote that he would be reaching out to the Interpol unit at the Israel Police and the Israel Tax Authority’s narcotics and money laundering unit.

McWilliams’ email suggests that the IRS opened an investigation into the Central Fund of Israel, according to Marcus Owens, a former director of the Exempt Organizations Division at IRS. Owens now works for the law firm Loeb & Loeb LLP, advising nonprofits that are undergoing government investigations.

“The IRS receives a fair number of complaints and doesn’t have the resources to follow up on many of them,” Owens told the JTA. “What that [email] means is the IRS did read the complaint and did decide there was enough to open an investigation.”

The fact that Central Fund still operates as a nonprofit more than six years later means the investigation was closed, according to Owens.

A representative of the Central Fund told Haaretz in 2016 that the IRS had come looking but found nothing improper. The group did not respond to a request for comment. McWilliams referred a JTA inquiry to the IRS’s press office, which did not respond to questions.

The result of the 2016 presidential election could have played a role in whatever transpired.

“The Trump administration came in and basically closed down the IRS for all intents and purposes,” Owens said. The defunding of the IRS ramped up under President Donald Trump but it had started years earlier.

In the years since the Central Fund first attracted scrutiny, it has not only managed to shrug off its critics but has also expanded rapidly — revenues have quadrupled from $12 million in 2012 to $48 million last year, according to IRS data.

To the dismay of rabbis who signed the letter, the Jewish Communal Fund is one of the major backers of the Central Fund, giving $1.6 million last year, and a total of $23 million since 2002, according to IRS records.

A mainstream charity with ties to the UJA-Federation of New York, the Jewish Communal Fund operates as a donor-advised fund. (UJA-New York supports 70 Faces Media, JTA’s parent company.) As such, it collects contributions from individuals, rewarding donors with anonymity and an immediate tax break, and doles out the money according to the recommendation of the donors.

Of $520 million distributed to 10,325 grantees in the year ending June 2021, the vast majority went to unobjectionable entities like schools, libraries and health centers. According to the rabbis’ letter, however, the Jewish Communal Fund should draw a line against a certain category of donations, rejecting requests by donors to pass money to the Central Fund of Israel. The letter asks the JCF to publish funding guidelines to “ensure that funding does not reach other organizations that support violence in Israel, in the United States, or anywhere else.”

The letter’s recipient, JCF’s CEO Susan Dickman, did not respond to a request for comment.

Donor-advised funds in the Jewish world, such as JCF, have come under increased scrutiny in recent years with questions about what criteria they use to screen donor requests. A few have taken action as a result: In 2018, the San Francisco Jewish Community Federation, a major Jewish charity, said it would stop directing donations to the Central Fund after the Forward revealed payments to Canary Mission, an online blacklist targeting college students who criticize Israel.

Virtually all Jewish funds have some rules or expectations arising from mission statements and guidelines, but there’s pressure to acquiesce to donor priorities, whatever they may be, according to Lila Corwin Berman, a professor of history at Temple University who has studied Jewish philanthropy extensively.

“There are very few cases of an organization saying, ‘No, we are not going to do what you want with the money,’” Berman said. Part of the reason is that donors can bypass restrictions imposed by Jewish entities and go with commercial firms like Fidelity and Charles Schwab.

“There is now a much wider landscape of funds that are free of any mission-driven impetus,” Berman said. “With the rise of those options, it’s so much harder for Jewish groups because their customers, so to speak, can walk.”

In their letter, the rabbis acknowledged that a decision in their favor would hardly limit the flow of cash to the Israeli groups.

“While ending grants to the Central Fund of Israel will not shut down Lehava or the other extremist groups, doing so will send a clear message that New York Jews refuse to tolerate violence,” they wrote.