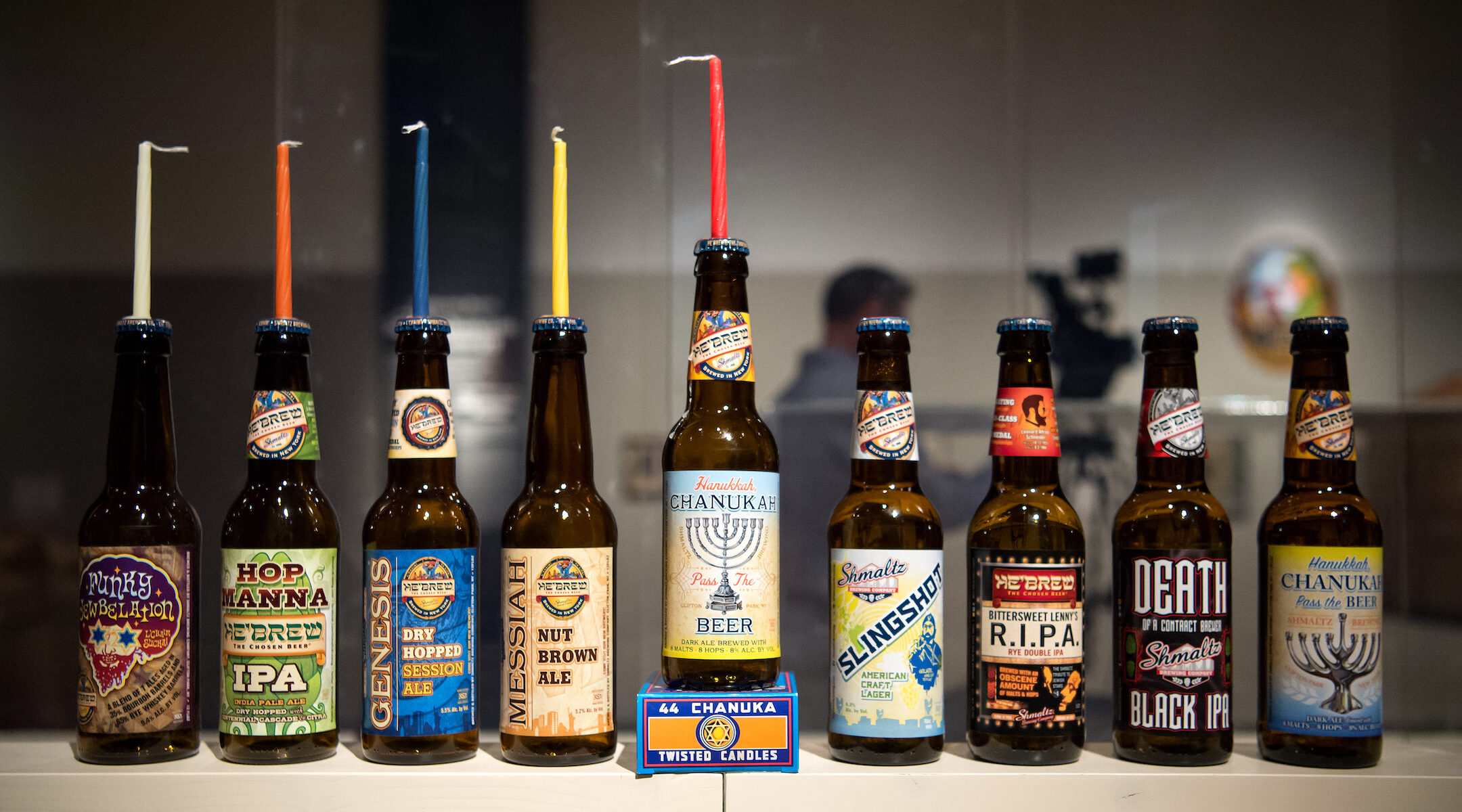 Various beer bottles by Shmaltz Brewery on display in an exhibition on "Jewish brewing stories" at the Jewish Museum in Munich, Germany, April 11, 2016. (Sven Hoppe/picture alliance via Getty Images)
Advertisement

(JTA) — It seemed like the last keg had been tapped for Shmaltz Brewing Company, until a rabbi-in-training stepped in for a Jewish renewal project.

The Jewish craft beer label, best known for its He’Brew: The Chosen Beer line of drinks, shut down last year after 25 years when its founder, Jeremy Cowan, said he wanted to focus on his other businesses. But now it’s been sold to a new owner: Jesse Epstein, a 26-year-old Reform rabbinical student at Hebrew Union College who first got into home brewing during the COVID-19 pandemic and began looking for ways to work his love for beer into his rabbinical pursuits.

“I started forming in the back of my mind this idea for a Jewish brewery: how to combine these two big passions,” Epstein told the Jewish Telegraphic Agency.

When he heard that Cowan was winding down Shmaltz, Epstein jumped at the chance to acquire the closest thing the beer world had to a storied Jewish brand — even though he has two-and-a-half years left of school and is currently a rabbinic intern at Temple Sinai of Saratoga Springs, New York.

“I could have waited to do this until after I was ordained and then I’d have more time on my hands, but I didn’t want to lose the opportunity,” Epstein said, declining to say how much he paid for the brand. Cowan agreed to the proposal, and remains at the company as a minority owner and consultant.

Founded in San Francisco in 1996 but now based in Clifton Park, New York, Shmaltz spent 25 years as the king of Jewish craft beer, with shtick-y brews like David’s Slingshot Hoppy Summer Lager, a jelly donut-flavored Hanukkah ale, and a Babka Loves Rugelach stout (brewed with chocolate, cinnamon and raisins). During its run it attained some level of notoriety and robust sales, with Cowan releasing a memoir, “Craft Beer Bar Mitzvah,” in 2010. Last year, after announcing he would close up shop, Cowan released an Exodus Ale as a swan song.

Epstein’s aims are different. As a rabbinical student wrestling with surveys showing a shrinking interest in Reform and Conservative affiliations among American Jews, he says his goal with Shmaltz is to use beer as a vehicle for rethinking the idea of a synagogue, and of Jewish communal gathering spaces.

“What about our Jewish values can be used to inform our food practices?” he asks. “How, through beer, can we embrace the values of welcoming in the stranger, freeing the captive, opening the eyes of the blind?” 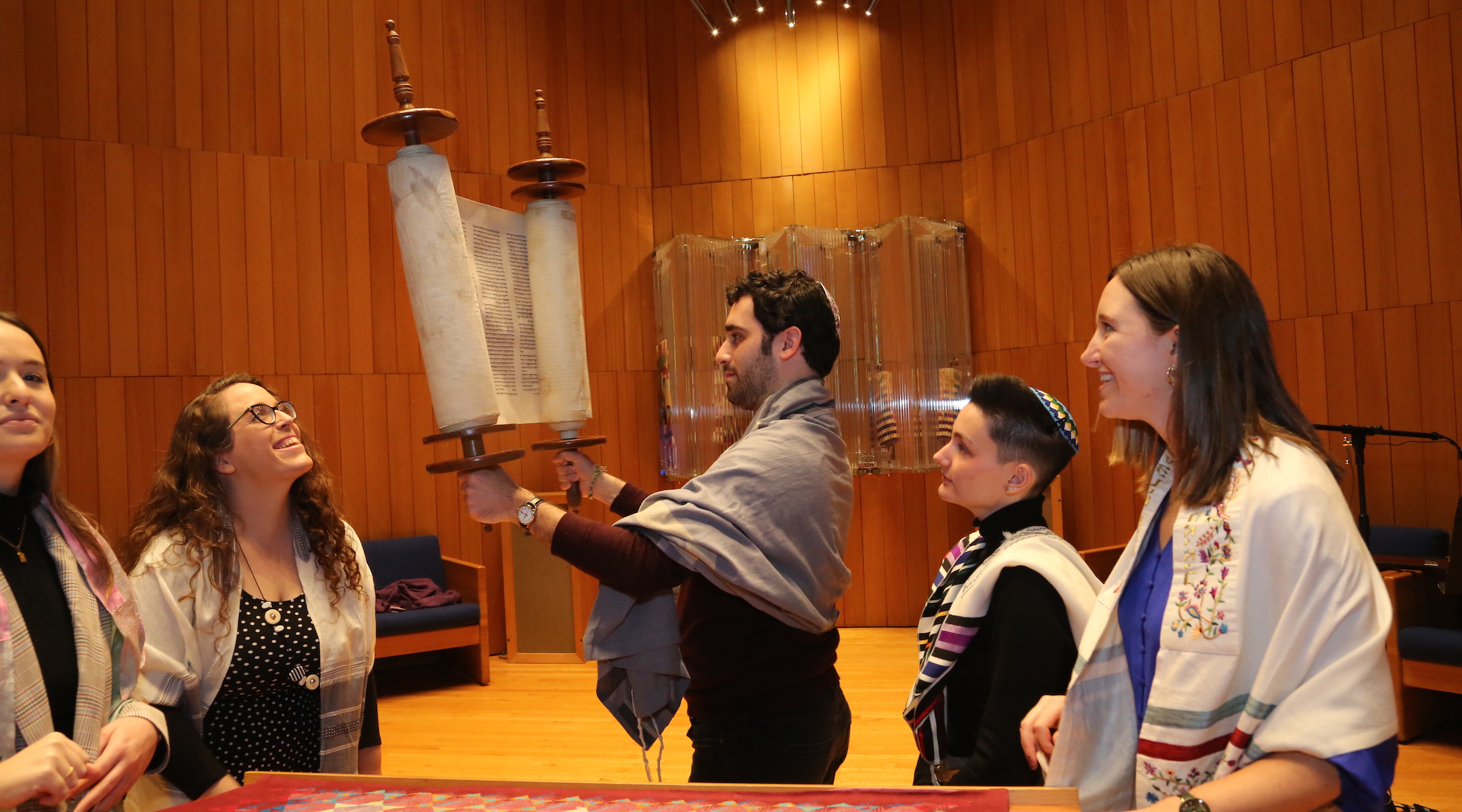 The revamped Shmaltz, working for now with an all-volunteer staff, is making Jewish practice and ritual as much a part of its brand as the shtick. Its first year under Epstein’s ownership will consist of a series of pop-up events in partnership with various Jewish groups, starting with a Dec. 17 Hanukkah launch party with Brooklyn Jews. (The events will mostly take place in New York, though Epstein may expand into other Northeast locations.)

At these gatherings, Epstein says, attendees will do the kinds of activities they might normally come to synagogue for: “Build community, do justice, look at a text, but over a pint of beer.” He sees Shmaltz as a peer of Jewish young-adult gathering projects such as Moishe House, OneTable and Base. But he says it will rely on a for-profit business model rather than institutional Jewish support.

Initially Epstein will draw from Shmaltz’s leftover inventory for the actual beers on hand at the pop-ups, and he is holding off on new products and distribution. But he hopes eventually to start brewing his own selections, which are decidedly more Talmudic in inspiration than the label’s previous offerings: He envisions a Purim-themed beer named “Shushan Beer-a” (a play on the first line of the Megillah, the scroll Jews read from on the holiday) and, ultimately, beers inspired by each of the weekly Torah portions. The brand’s labels will now include a Jewish blessing for beer, in Hebrew and English.

Ultimately, Epstein says, he would love to run Shmaltz full-time: “I can really foresee it becoming my rabbinate.”