A new indie Italian comedy will change the way you look at Jewish cemeteries forever—not to mention that boot-shaped country by the sea.

Based on a true family story, Felice Nel Box by first-time director Ghila Valabrega begins with Stefano, a Jewish photographer on a journey, stumbling across a dilapidated Jewish cemetery in the northern Italian town of Sabbioneta. Saddened by the thought of the community being forgotten, Stefano grabs a tombstone and brings it home with him to Milan. What he doesn’t realize is that the ghost of the buried man, Felice Leon Foa, hops along for the ride. Fast forward thirty years, and Felice Nel Box is the whimsical story of how Stefano’s two daughters and wife can see Foa…and about the love affair blooming between Foa and Stefano’s wife.

The film’s not yet done, and they’ve got one of the coolest crowdfunding concepts we’ve seen: Despite being a Unesco Heritage site, the stunning, 190-year-old synagogue of Sabbioneta has fallen into disrepair due to a number of recent earthquakes. Valabrega wants to help. 50% of every donation to the film’s production will go toward its restoration.

Watch a trailer for the film: 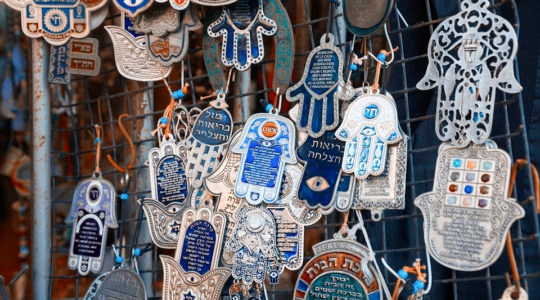