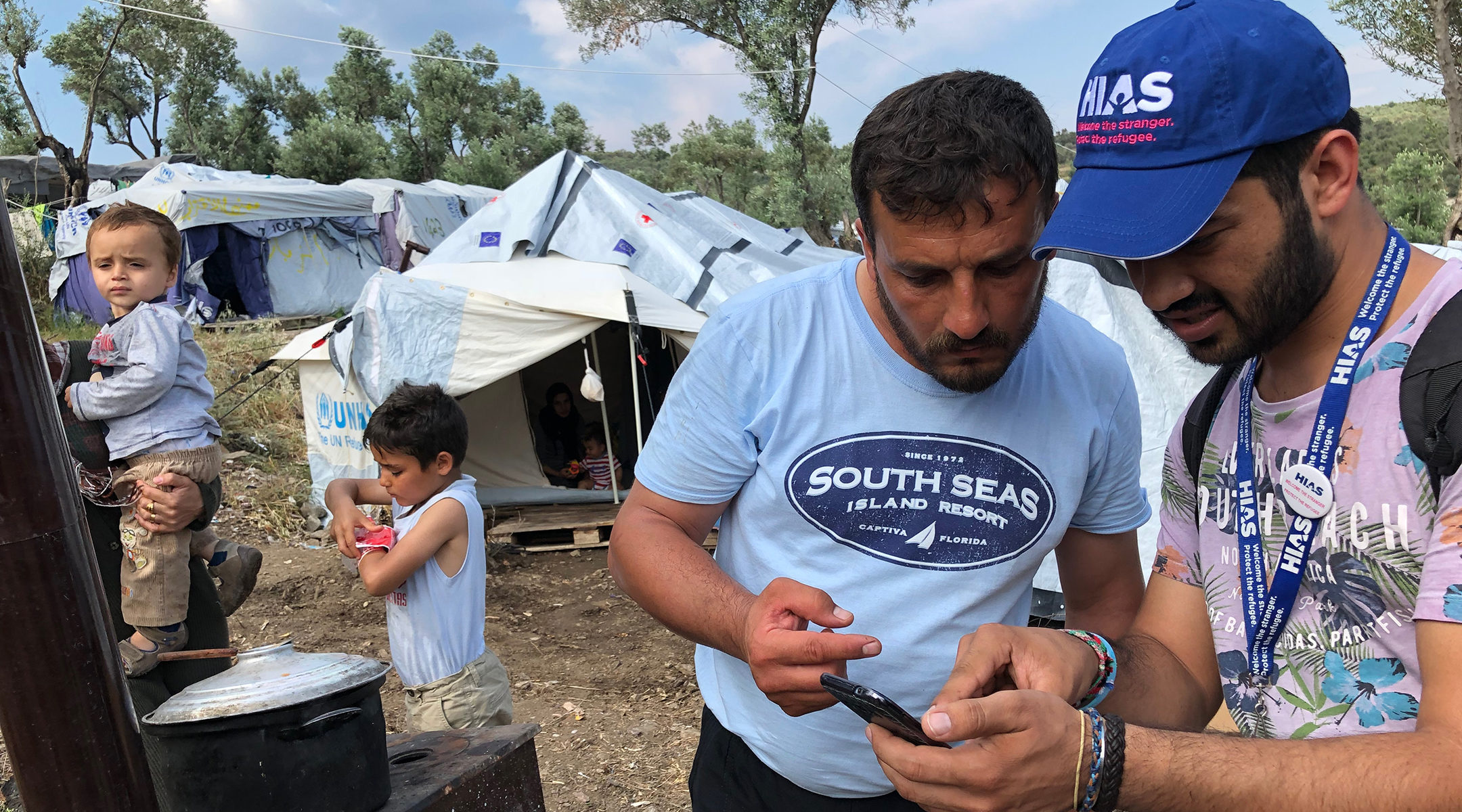 HIAS Greece translator Jalal Barezkai, right, assists a Syrian refugee in an encampment near the Moria refugee camp on the island of Lesbos, Greece, May 9, 2018. (Bill Swersey/HIAS)
Advertisement

The HIAS Brussels office, which opened this month, has three employees and is geared toward empowering European Jewish communities to work with asylum seekers, Melanie Nezer, the group’s senior vice president for public affairs, told the Jewish Telegraphic Agency.

The Brussels office will be geared toward becoming “the go-to address of Jewish communities in Europe when they want to make their voice heard about immigration or need guidance” on how to carry out activities on the ground, Nezer said, as well as a vehicle for cooperation with the EU on the issue of assistance to asylum seekers.

While HIAS is helping thousands of asylum seekers elsewhere apply for legal status in their countries of destinations, and also assists them with job training and integration activities, the Brussels office will not help them on an individual basis.

The Brussels office is planning on hosting joint activities that bring Jews and non-Jewish asylum seekers together. One such event is planned for Passover and will feature a seder attended by Jews and asylum seekers.

At least 2 million asylum seekers have entered Europe since 2014, constituting one of the largest waves of arrival by outsiders to the continent. The issue further divided European societies, which had already seen considerable discontent over the effects of the arrival of millions of Muslims into Europe since the 1950s.

Countless immigrants from the Middle East, including the most recent ones, are making efforts to integrate into their adopting societies. Some asylum seekers, however have perpetrated anti-Semitic violent attacks since 2014 in Western Europe, where most such incidents are attributed to people whose families come from Muslim countries.

In 2017, a Syrian asylum seeker in Amsterdam smashed the windows of a kosher restaurant while holding a Palestinian flag and broke into the restaurant to commit burglary. Another asylum seeker participated in the attempted torching of a synagogue in Sweden that year.

Subsequently, some Jewish communities, including in the Netherlands, said they are not interested in having asylum seekers housed in neighborhoods with many Jews out of security concerns.

Josef Schuster, head of the Central Council of Jews in Germany, in 2015 said immigration from the Middle East should be limited, adding that those who come hail “from cultures where hatred of Jews and general intolerance are par for the course.”

“The best way to deal with it is through interaction with Jews and Jewish communities, which is what HIAS is promoting,” she said. “Keeping asylum seekers in isolation isn’t going to help solve anything.”

Ilan Cohn, who is running the HIAS Brussels office, said the new presence will “help raise awareness of the issues affecting refugees and asylum seekers and create opportunities to help the most vulnerable among us.”