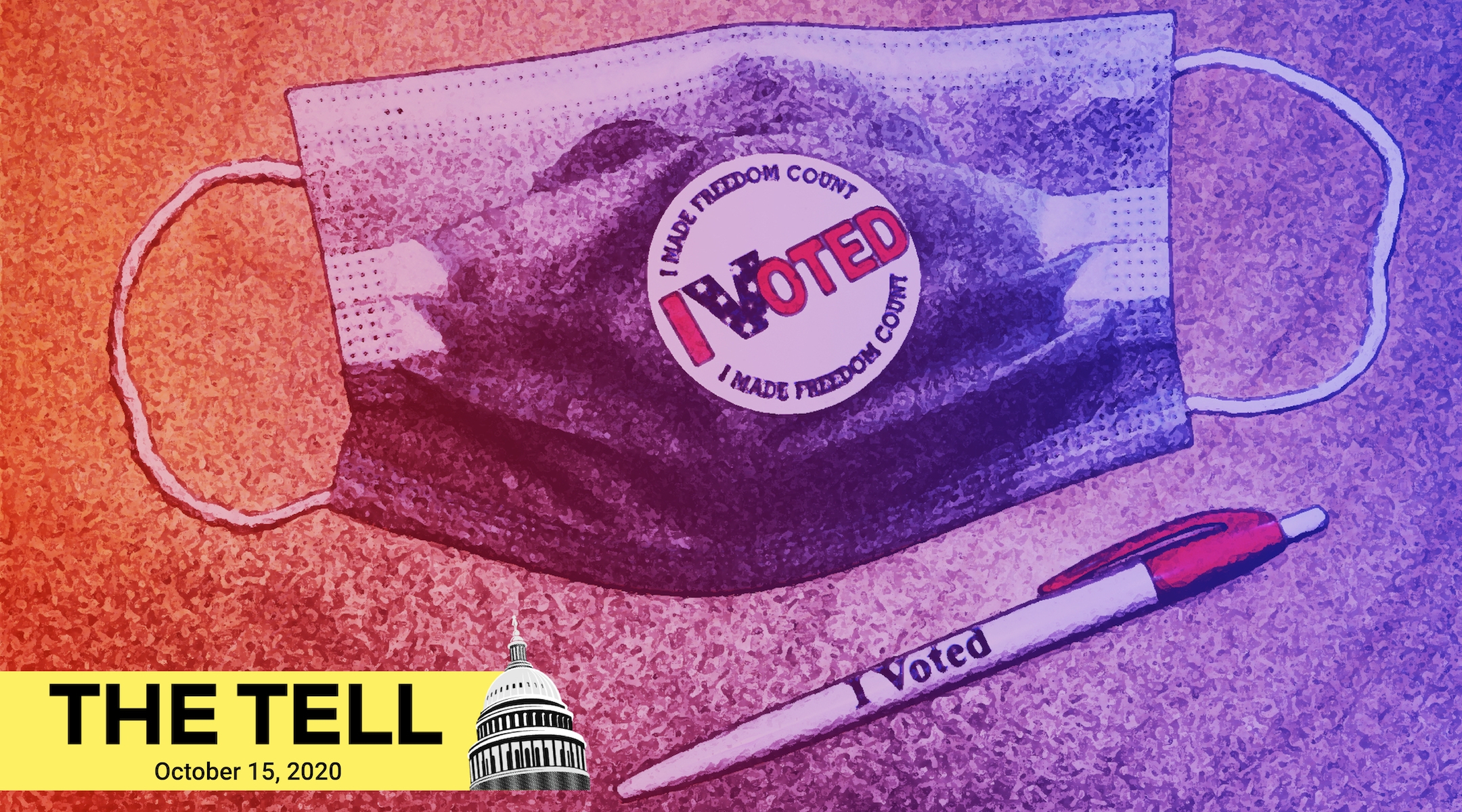 (JTA) — “We want to make sure that every vote is counted,” Melanie Roth Gorelick told me this week for a story I wrote about Jewish organizations preparing for elections on Nov. 3.

In the year 2020, that’s become a radical statement.

Gorelick is the vice president of the Jewish Council for Public Affairs, the umbrella body for Jewish public policy groups.

In my decades of covering the U.S. Jewish community, the JCPA is the body most driven by consensus. Its annual resolutions, when they come, have been worked for months through the sausage maker of local and national Jewish community politics, left, right and center. Occasionally the process results in statements bland to the point of meaninglessness.

In other words, I don’t expect a senior JCPA official to go radical in an interview, but Gorelick’s statement — innocuous in a normative election — was radical, for two reasons.

First, if you’re for counting all votes, you’re by default placing yourself in opposition to President Donald Trump and much of the Republican Party. As I note in the story, the areas of focus for nonpartisan Jewish get-out-the-vote efforts run up against Trumpian resistance in almost every instance: the striking of eligible voters from the rolls, the shuttering of polling stations, disinformation about mail-in voting, calls on partisan watchers to loom over polling stations, and Trump’s insistence that the election is declared the night of Nov. 3.

Second, Gorelick does not modify “vote” with Jewish. All votes matter. Federations and community relations councils across the country are educating their Jewish communities about how to vote on Election Day, as they have in previous cycles. But this year, with an intensity I have not seen in the past, a number of Jewish organizations are dedicated to getting out to vote sectors that they say are disenfranchised, among them people of color.

Read more here on Jews on voting rights. My colleague Ben Sales wrote about how Jewish security officials are on the alert for right-wing violence on election day.

Northern exposure: Anchorage Mayor Ethan Berkowitz resigns after a sexcapade ends with an anti-Semitic meltdown. Speaking of Jews in Alaska (and who doesn’t), Al Gross, who is running for the Senate, is the Jewish doctor with a grizzly backstory. He also outraised and is polling even with the Republican incumbent, who this week became embroiled in a scandal of his own.

Fleshing Heshy: Heshy Tischler, the Brooklyn rabble-rouser who cornered Jewish Insider’s Jacob Kornbluh is at once not all he seems (he represents no concrete constituency) and more than he seems (he’s done time). My colleague Shira Hanau finds out what makes Heshy run.

Who let the dog whistles out? My colleague Ben Sales analyzes Mitch McConnell’s mockery of New Yorkers, and Clarence Thomas’s wife extends the Soros conspiracies to the entire Soros clan.

Taking her Q: U.S. Sen. Kelly Loeffler, one of two viable Republicans running for an open Senate seat in Georgia, on Thursday enthusiastically accepted the endorsement of Marjorie Taylor Greene, a House candidate who has dabbled in QAnon, which peddles anti-Semitic conspiracy theories. The Republican Jewish Coalition supported Greene’s opponent in her primary; I asked Matt Brooks, the RJC director, whether Loeffler’s Greene new deal would get her GOP opponent, Rep. Doug Collins, the RJC endorsement. He told me the RJC is staying out of this race.

Denver Riggleman, the Virginia Republican bested this year in a primary by an anti-gay-rights opponent (Riggleman officiated at a same-sex marriage), is using his last few months in office to warn his fellow Republicans about the dangers posed by QAnon and its adherents. Speaking about the Loeffler endorsement, Riggleman told CNN, “If you’re a public servant, you have to make sure the facts are there before you tweet. If it’s insane, you probably shouldn’t tweet it.” (The RJC also went to battle for Riggleman in his primary.) “For people like me it’s harder and harder to find a home in the GOP,” Riggleman said. 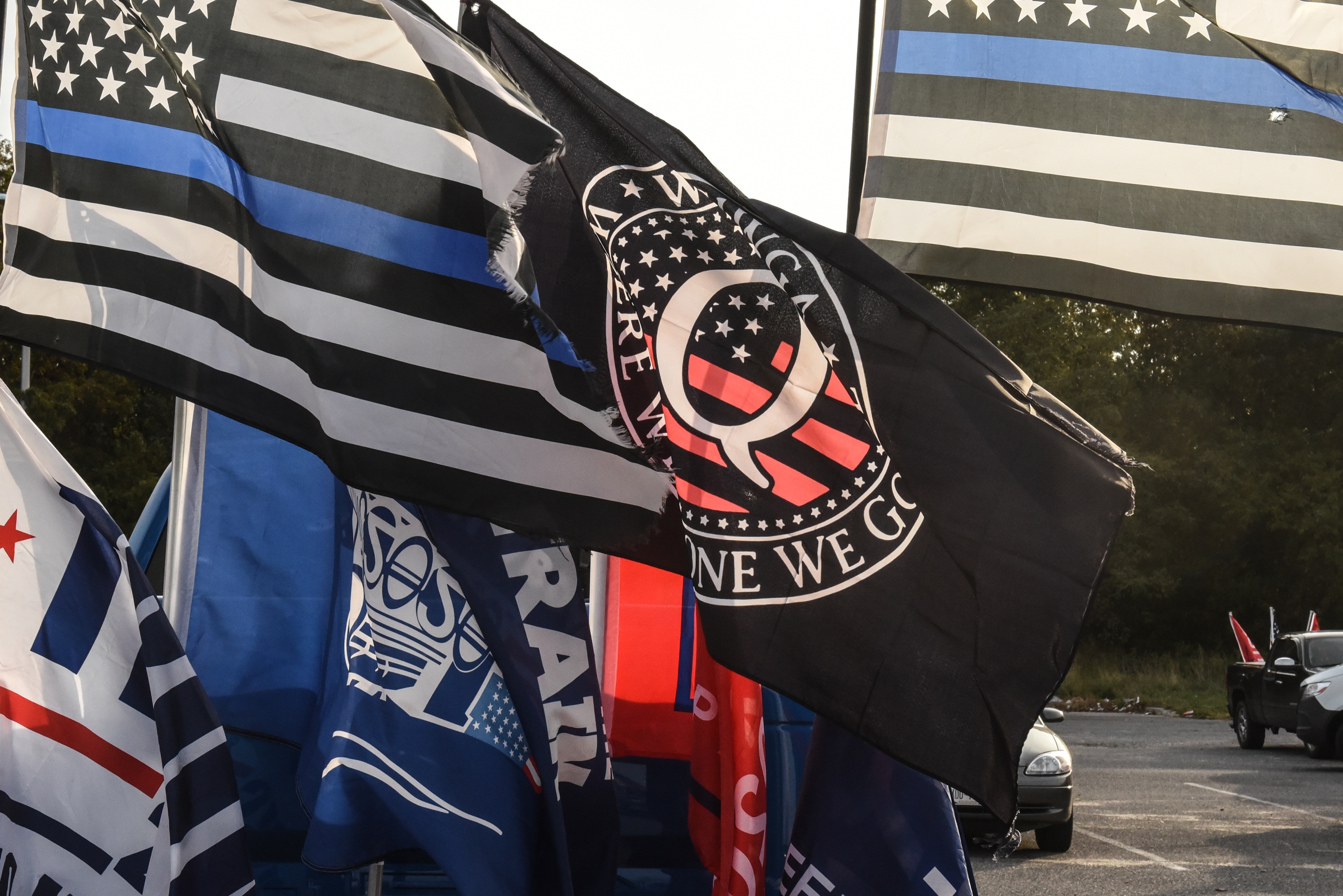 A flag for the QAnon conspiracy theory is flown with other right wing flags during a pro-Trump rally on October 11, 2020 in Ronkonkoma, New York. (Stephanie Keith/Getty Images)

At The New York Times, Katrin Bennhold examines how the QAnon myth has found a troubling home on Germany’s far-right. 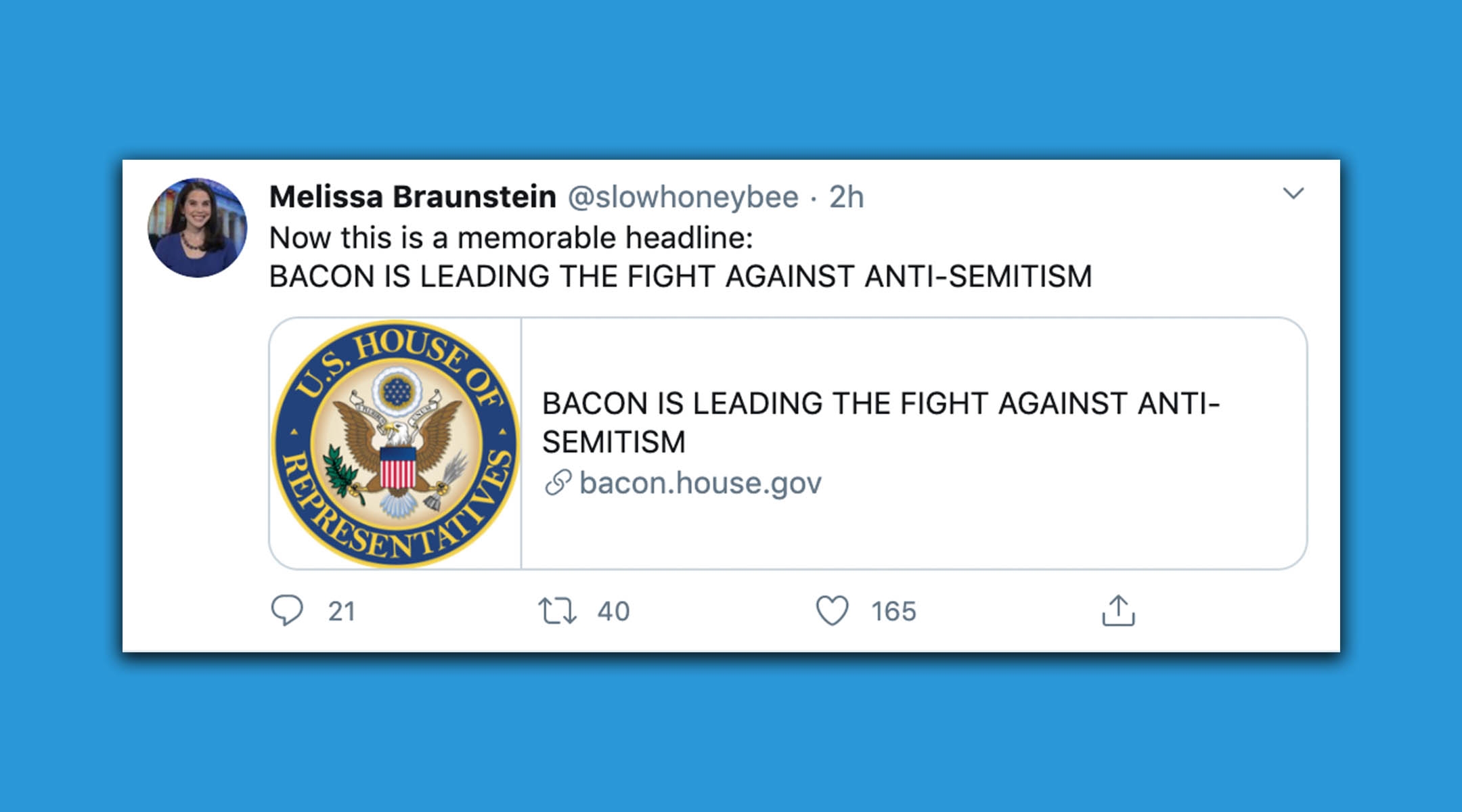 Melissa Braunstein, a Washington-based writer, discovers a potent ally in the fight against anti-Semitism.