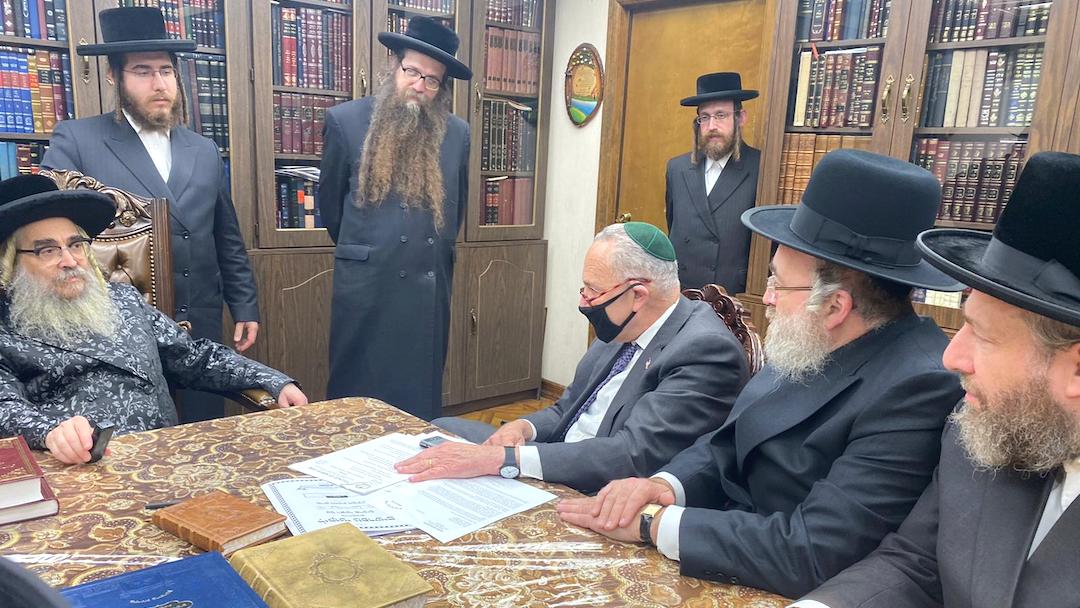 ON THE DOCKET: A Jewish middle school teacher in Park Slope, Brooklyn filed an antisemitism complaint after he was told to stop wearing T-shirts that say “Proud Zionist” and “Back the Blue” to school. (New York Post, Yahoo! News)

ON THE DEFENSIVE: Rob Astorino, a Republican gubernatorial candidate, said he had no idea that anti-vaxxers were displaying swastikas and a yellow Star of David as he spoke at a rally Sunday outside the Bronx office of Assemblyman Jeffrey Dinowitz. (Jewish Week via JTA)

ON THE COUCH: A new play by Tel Aviv’s Cameri Theatre is being performed in New York — but only in people’s living rooms. (Jewish Week via JTA)

ON THE MOVE: A 19th-century statue of Thomas Jefferson, originally a gift to the City Council from a Jewish military officer, will be given to the New-York Historical Society. The statue will be displayed as part of an exhibition looking at the “principal contradiction of our founding ideals.” (New York Times)

ON THE AIR: Listen to a radio report about Lipa Schmeltzer, the New York-born Hasidic Jew who creates modern Jewish music while trying to stay true to his roots. (BBC Sounds)

Helene Fortunoff, who helped turn her husband Alan’s mom-and-pop housewares business into a major jewelry and giftware company and one of the biggest retailers in the New York City area, died Nov. 8 at age 88 in Miami Beach, Florida. She launched Fortunoff’s first jewelry line, bringing on Lauren Bacall as a spokeswoman. She and her husband supported the Fortunoff Video Archive for Holocaust Testimonies at Yale University in memory of his parents, Max and Clara Fortunoff. (JTA)

Brooklyn-born Pauline Bart, a sociologist and professor of women’s studies who studied depression among 1950s Jewish housewives and modeled much of her research on women’s lives on her own experiences, died Oct. 8 at age 91. Bart researched and lectured about abortion access and the ways in which medical professionals were trained to treat issues of women’s health, and advocated for Jewish experiences to be included in multicultural and women’s studies programs. (JTA)

Met Council and the Maimonides Medical Center board of trustees are giving away 2,000 turkeys to the frontline staff at MMC who worked to help New Yorkers get through the pandemic. Nurses, doctors and staff can pick up turkeys from 4:00 p.m. to 5:00 p.m. on Nov. 16 outside the administrative building at 4802 Tenth Avenue, Brooklyn.

The National Museum of American Jewish History in Philadelphia released a comprehensive virtual tour of its core exhibition, thanks to an undisclosed gift from New York philanthropist and cellular communications mogul George Blumenthal.

David Sorkin, Lucy G. Moses Professor of Modern Jewish History, Yale University, explores the centrality of the Jewish emancipation process across Europe, the United States and the Ottoman Empire, focusing on the Jews’ relationship to the modern state in the Diaspora as well as in the State of Israel. Register for this virtual Purchase College event here. 4:40 p.m.

Keshet, which envisions full equality and dignity for the LGBTQ Jewish community, is honoring three leaders who are making change within and outside the Jewish community: the Lemay family, whose members advocate for trans and non-binary rights; educator and Torah scholar Rabbi Becky Silverstein and Edit Klein, president and CEO of Keshet. Go here to learn more about the interactive online reception and program. 7:00 p.m.

JArts Theatreworks Group presents “You Will Not Play Wagner,” a new virtual adaptation of the play by the late playwright Victor Gordon, about a young Israeli upstart who provokes an uproar when he chooses to perform work by the antisemitic composer Richard Wagner in the finals of an international competition for conductors. Register here. 7:00 p.m.