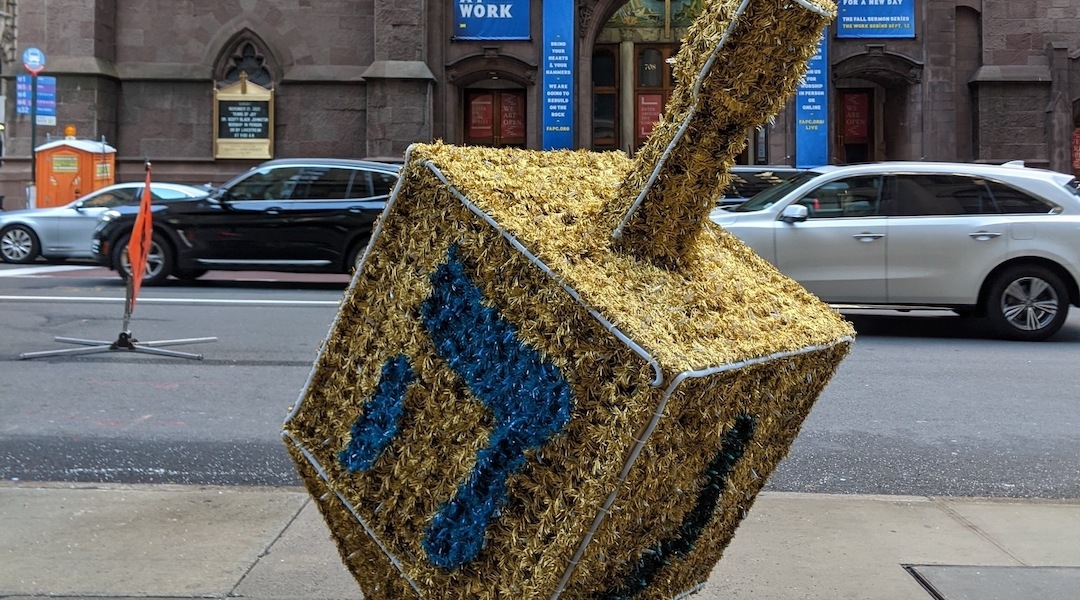 The Fifth Avenue Association erected a dreidl sculpture as part of its "Fifth Season" celebration up and down the avenue. (Julian Voloj)
Advertisement

Shabbat Shalom, New York! Hope you had a happy Thanksgiving. Now get off the couch and get ready for Hanukkah, which starts Sunday evening.

Catch the stories you missed this week with our downloadable, printable “Jewish Week/end,” perfect for offline reading, emailed every Friday. Sign up here. Get today’s edition here.

TONY AND MENORAH: The latest Hanukkah parody video from the New York-based Jewish a cappella group Six13 is a tribute to “West Side Story.” (Jewish Week via JTA)

BDS AT NYU: New York University and its School of Law rebuked a student-run publication that expressed its “firm commitment” to the academic boycott of Israel. (Jewish Journal)

SOLD: A letter by Albert Einstein, warning a friend in New York about antisemitism in U.S. academia, fetched nearly $40,000 in a sale by the Kedem Auction House in Jerusalem. (Times of Israel)

APPOINTED: Aaron Keyak, who led Jewish outreach for the Biden presidential campaign and once served as communications director for Rep. Jerry Nadler (D-Manhattan), is joining the State Department as Deputy Special Envoy to Monitor and Combat Anti-Semitism. (JTA)

SENTENCED: Dov Malik, an Israeli securities trader and one-time member of the Israeli national swim team, was sentenced to 30 months in prison for his role in an international insider trading scheme, according to the U.S. Attorney for the Southern District of New York. (Times of Israel)

Baker Sylvia Weinstock, who rose from humble Brooklyn roots to become known as the “Queen of Cakes,” died Monday at age 91. (Jewish Week via JTA)

Jane Berenbeim of New York City has been elected president of the International Association of Jewish Genealogical Societies. Moriah Amit, also of New York City, was named a director-at-large. An amateur genealogist for more than 20 years, Berenbeim is a longstanding member of the executive council of the Jewish Genealogical Society, Inc. (New York) and is its immediate past president. Amit is the Senior Genealogy Librarian at the Center for Jewish History’s Ackman & Ziff Family Genealogy Institute.

In this week’s portion, Vayeshev, Joseph is silent about the traumas that defined his youth. “We rarely know the pain that people around us carry,” writes Dr. Shuly Rubin Schwartz, chancellor of The Jewish Theological Seminary.

The Jewish Community Council of Greater Coney Island (3001 West 37th Street between Surf Avenue and the Boardwalk) is seeking volunteers for its annual Chanukah Food Package Distribution, scheduled for Nov. 30-Dec. 3. If you are able to assist, please RSVP to officemanagement@jccgci.org.

The world’s largest Hanukkah menorah, sponsored by the Lubavitch Youth Organization, will be lit each night of the holiday on Fifth Avenue and 59th Street in Manhattan. The Chabad-Lubavitch Mitzvah Tank Organization will also stage their annual Hanukkah parade, starting at 6 p.m. Sunday.

ICYMI: Here’s our guide to eight only-in-NYC ways to celebrate the holiday.

Samuel Goldfarb, a Polish immigrant who grew up on the Lower East Side, contributed a classic Hanukkah custom. Which one?

National Yiddish Theatre Folksbiene presents ESN, a virtual celebration of Jewish food through song and cooking demonstrations. The event stars Frank London and Lorin Sklamberg of the Grammy Award-winning Klezmatics and is free to stream Nov. 28–Dec. 6. Visit watch.nytf.org to view the performance.

Join the Center for Jewish History and The New York Jewish Week Nov. 29, 6:00 p.m. for a tribute to William Helmreich, the late sociologist, author, scholar of Judaism and distinguished professor. Featuring Jeffrey S. Gurock, the Libby M. Klaperman Professor of Jewish History at Yeshiva University, and Matt Green, who walked every block of New York City for his film “The World Before Your Feet.” Moderated by Sandee Brawarsky. Register here.

Photo, top: The Fifth Avenue Association erected a dreidl sculpture as part of its “Fifth Season” celebration up and down the avenue. (Julian Voloj)