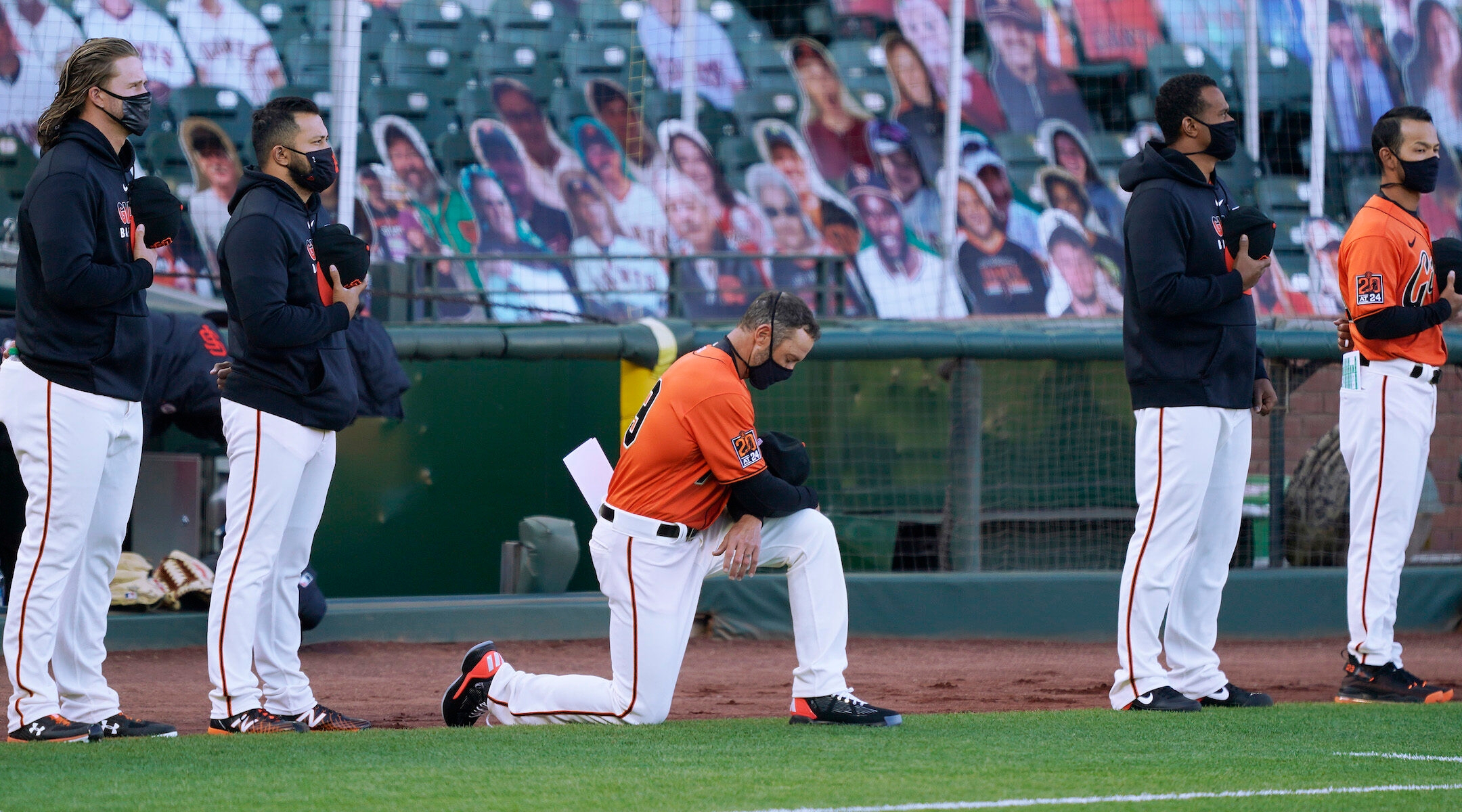 Gabe Kapler kneels during the playing of the National Anthem prior to a game at Oracle Park in San Francisco, July 31, 2020. (Thearon W. Henderson/Getty Images)
Advertisement

The 46-year-old Jewish manager of the San Francisco Giants is relatively young for a professional coach. He’s active on social media and writes his own blog. He’s a fitness geek with a unique diet and very Jewish tattoos. ESPN recently deemed him “the most interesting man in baseball.”

And in 2020, amid racial justice protests across sports, Kapler became the first Major League Baseball manager to kneel during the anthem.

So it was not shocking to some that in the wake of the deadly mass shooting at an elementary school in Uvalde, Texas, Kapler announced last week that he would begin skipping the pregame national anthem to protest the “state of this country.”

“When I was the same age as the children in Uvalde, my father taught me to stand for the pledge of allegiance when I believed my country was representing its people well or to protest and stay seated when it wasn’t,” Kapler wrote on his blog. “I don’t believe it is representing us well right now.”

While some of Kapler’s tendencies have earned him the reputation of an outsider, his political activism follows a path paved by American Jewish athletes for decades before him, from World War II and the Holocaust to more recent fights for equal pay in sports.

Here are some examples, from then and now, of Jewish advocacy in the sports world. 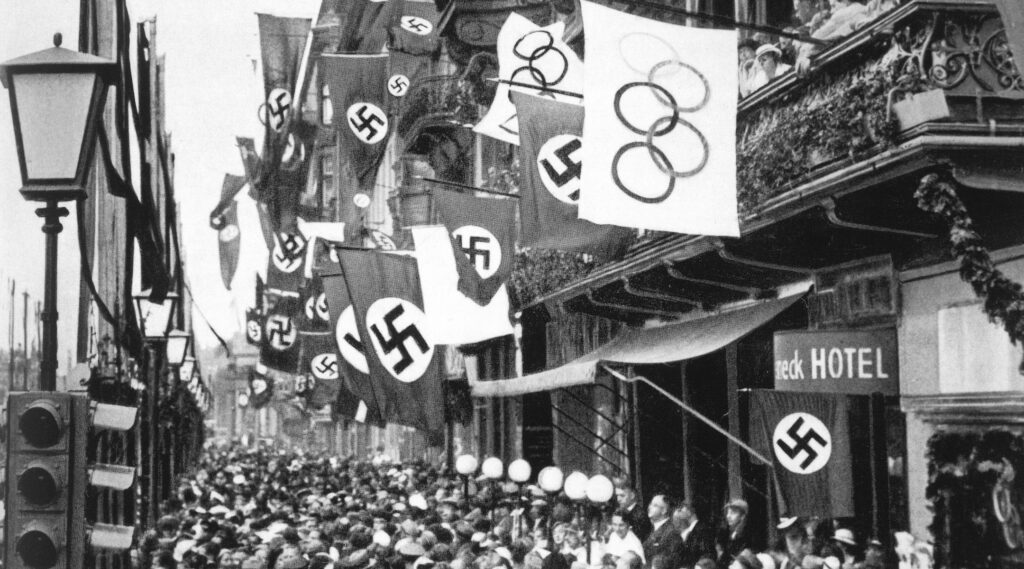 A scene from Berlin during the 1936 Olympics. (Getty Images)

The 1936 Olympic Games were held in Berlin in 1936, two years after Adolf Hitler had ascended to power and well into his antisemitic campaign. German Jewish athletes were banned from competing, and many saw participation in the Olympics as an endorsement of Hitler and the Nazi regime. In August 1934, the Jewish Telegraphic Agency reported about calls for Jews not to compete.

“My advice to the athletes and others of world Jewry is not only not to compete but to keep as far away as possible from any form of participation in the Olympic Athletic Games to be held in Berlin in 1936,” said Samuel Untermyer, president of the Non-Sectarian Anti-Nazi League to Champion Human Rights, an organization that advocated for economic boycotts of Nazi Germany — and later infiltrated the Ku Klux Klan. “Out of decent consideration for their race, it is unthinkable that any self-respecting Jew could accept the hospitality of a country that persists in so insulting, degrading and persecuting our people.”

In October 1935, JTA reported on the mounting pressure, from both Jews and non-Jews, for a boycott of the Olympics, including from prominent faith leaders and politicians.

But while some Jewish athletes skipped the games, several Jews would compete — and medal — in Berlin. The Nazis convinced most of the world to participate as well. 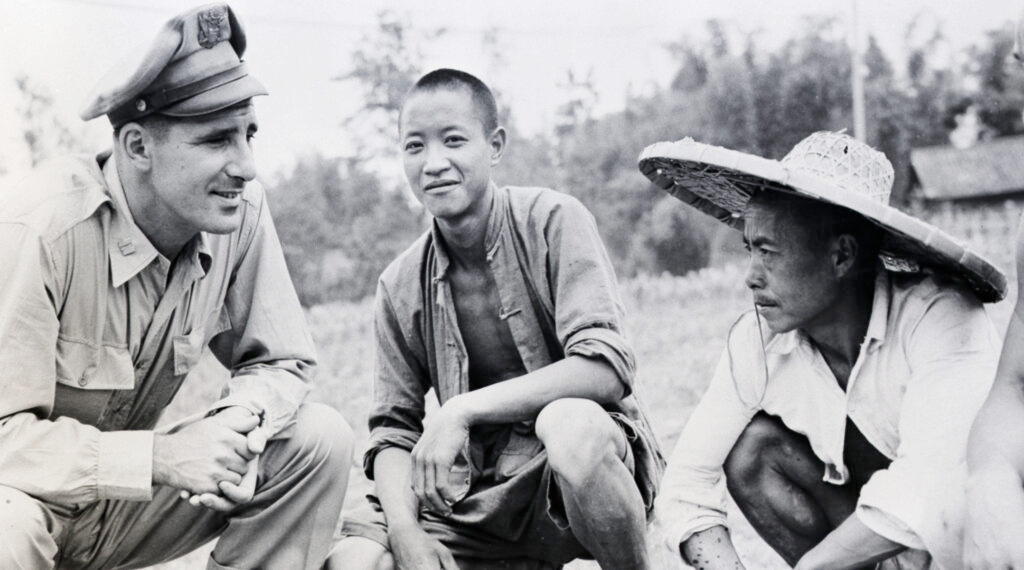 As World War II raged in Europe, Jewish baseball legend Hank Greenberg was the first American League player to register for the U.S. military draft. He would ultimately serve for roughly four years, including a tour in China in 1943.

Greenberg initially served for three months before returning to Detroit ahead of the 1942 season. But following the bombing of Pearl Harbor on Dec. 7, 1941, he reenlisted.

“I’m going back in,” Greenberg said at a press conference announcing his decision, according to the National Museum of American Jewish Military History. “We are in trouble and there is only one thing left to do — return to service. I have not been called back, I am going back of my own accord.”

One of the top hitters in baseball, Greenberg left the sport during his prime to serve. When he returned in July 1945 — only two weeks after he was discharged — he hit a home run in his first game back. In his final season two years later, he was noted for his embrace of a pathbreaking rookie: Jackie Robinson, the first Black Major Leaguer.

As one of only a handful of Jewish sports stars at the time, Greenberg was also on the receiving end of considerable antisemitism and hate speech throughout his career. He didn’t shy away from it, once saying: “Every home run I hit was a home run against Hitler.”

A push for racial equality 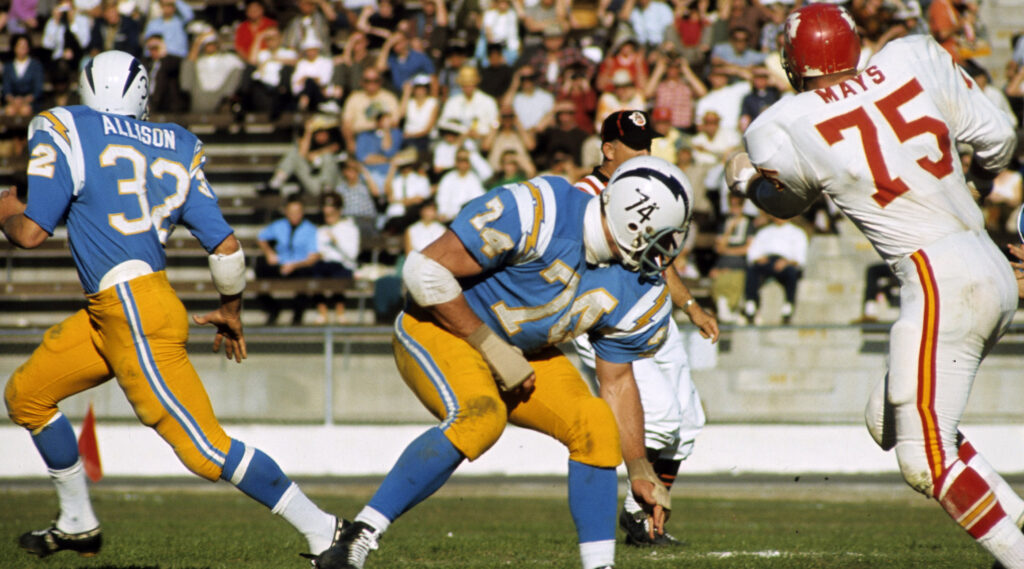 Ron Mix (74) was a Hall of Fame football player from 1960-1971, primarily playing for the San Diego Chargers. (James Flores/Getty Images)

When Morrie Arnovich enlisted in the U.S. army in 1942, his greatest impact arguably came on the baseball diamond.

Arnovich was assigned to Fort Lewis, Washington, where he would play for and manage the base’s baseball team. It was there that he fielded a fully diverse, integrated team — before Jackie Robinson broke Major League Baseball’s color barrier a few years later. Arnovich’s leadership caught the attention of then-MLB commissioner Happy Chandler.

That same year, Sam Nahem also managed and pitched on an integrated team while serving in the military.

“I was in a strange position. The majority of my fellow ballplayers, wherever I was, were very much against black ballplayers, and the reason was economic and very clear,” Nahem told J. The Jewish News of Northern California years later. “They knew these guys had the ability to be up there and they knew their jobs were threatened directly and they very, very vehemently did all sorts of things to discourage black ballplayers.”

Fast forward to 1965, and future Hall of Fame offensive tackle Ron Mix was chosen as an American Football League All-Star. The game was set to take place in New Orleans, but many black players were uneasy playing in a city where the realities of the Jim Crow South had not yet been rectified. So they initiated a protest.

The league didn’t know what to do. Then, Mix became the first white player to join them. From there, the protest grew, and the league was forced to move the game to Houston.

Aly Raisman stands up and speaks out on abuse 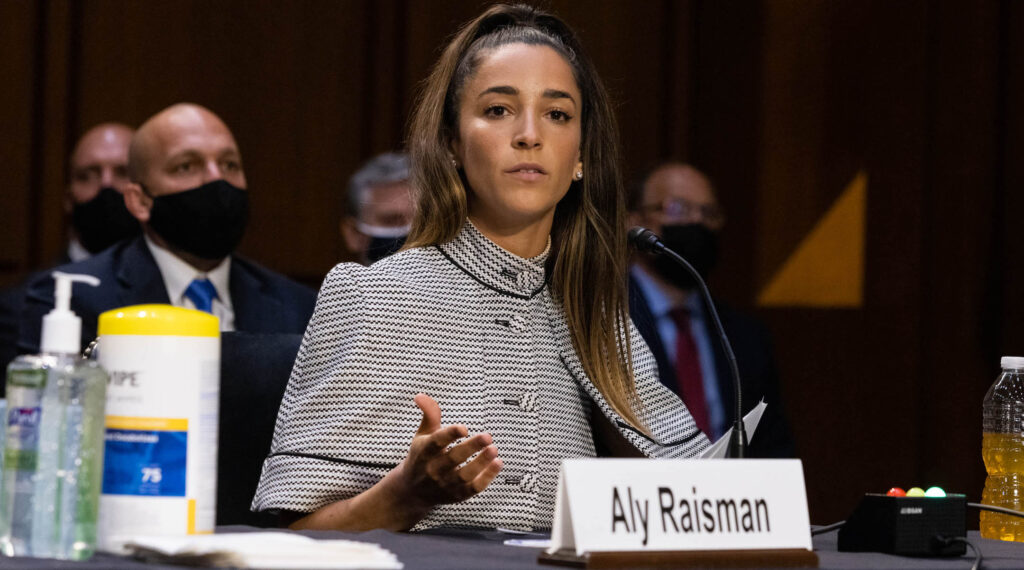 Aly Raisman testifies during a Senate Judiciary hearing about the Inspector General’s report on the FBI’s handling of the Larry Nassar investigation on Capitol Hill, Sept. 15, 2021. (Graeme Jennings/Pool/Getty Images)

The 2012 Olympics were huge for Jewish gymnast Aly Raisman. She won a gold medal while performing to “Hava Nagila” on the way to becoming one of the most accomplished gymnasts in U.S. history.

The Boston-area native had also advocated for the Olympics to hold a moment of silence for the Israeli athletes killed in the 1972 Munich Games. That ultimately happened — nearly a decade later, in 2021.

Raisman’s advocacy didn’t stop there. As details emerged about the years-long pattern of sexual abuse by U.S. Gymnastics team doctor Larry Nassar, Raisman became one of the most vocal athletes in the groundswell of accusations and personal testimonies, as a harsh critic of both U.S. Gymnastics and the U.S. Olympic Committee. She emerged from the trauma and the court case as a national hero for girls and women, and has remained an advocate for systemic changes in the Olympics and sports overall.

“I just think that the culture of the sport needs to change,” Raisman said in an interview with the New Yorker last year. “It’s been normalized for this long. That’s why a lot of athletes don’t recognize when something bad is happening, because when it’s happening to your teammates or your friends it’s hard to recognize that it isn’t normal. Sometimes athletes don’t know how bad it is until they start going into normal life and they see how they can be treated so much better.” 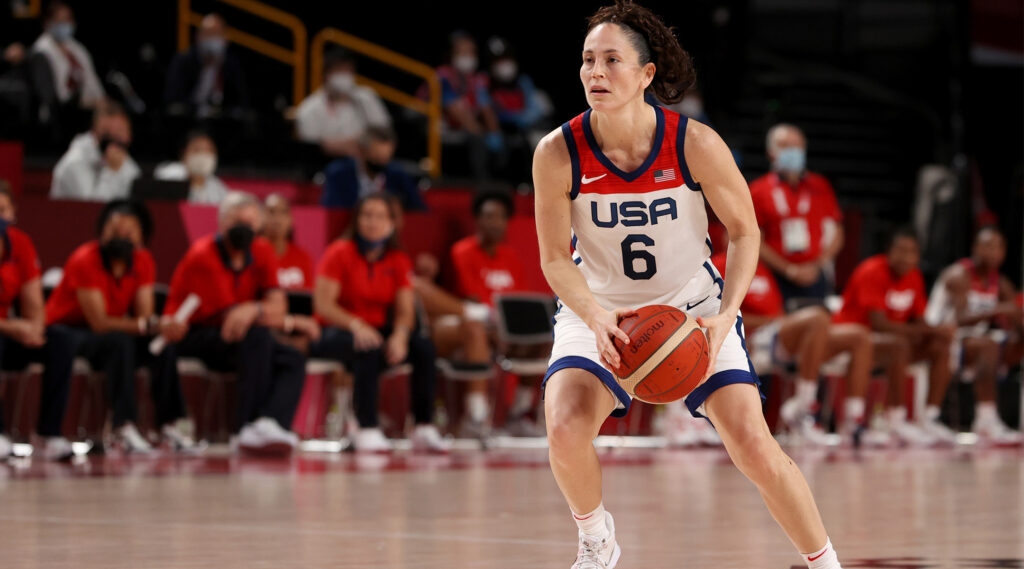 Jewish basketball icon Sue Bird is one of the most decorated players in the history of women’s basketball. The five-time Olympic gold medalist (that’s a record) and four-time WNBA champion is a leader on and off the court.

Bird, like her fiance, the U.S. Soccer star Megan Rapinoe, has been on the frontlines of the movement for equal pay in women’s sports.

Ahead of the 2020 Olympics, Bird led a successful effort to secure more pay for players who wanted to train for the Games — without having to go abroad to make money.

“This was a living example of literally knowing your value and not budging,” Bird told MSNBC in 2020. “We knew what we were bringing to the table, and we didn’t back down.”

Around the same time, WNBA players negotiated a new contract that allowed stars like Bird to more than triple their salaries.

“If we’re not going to fight for ourselves, no one’s fighting for us, historically speaking,” Bird said. “It’s uncomfortable to have to walk into a room and speak of your own value and tell people you’re valuable, [but] it’s incredibly important because you can’t wait for somebody else to advocate for you.”

Calls for a Beijing Olympics boycott 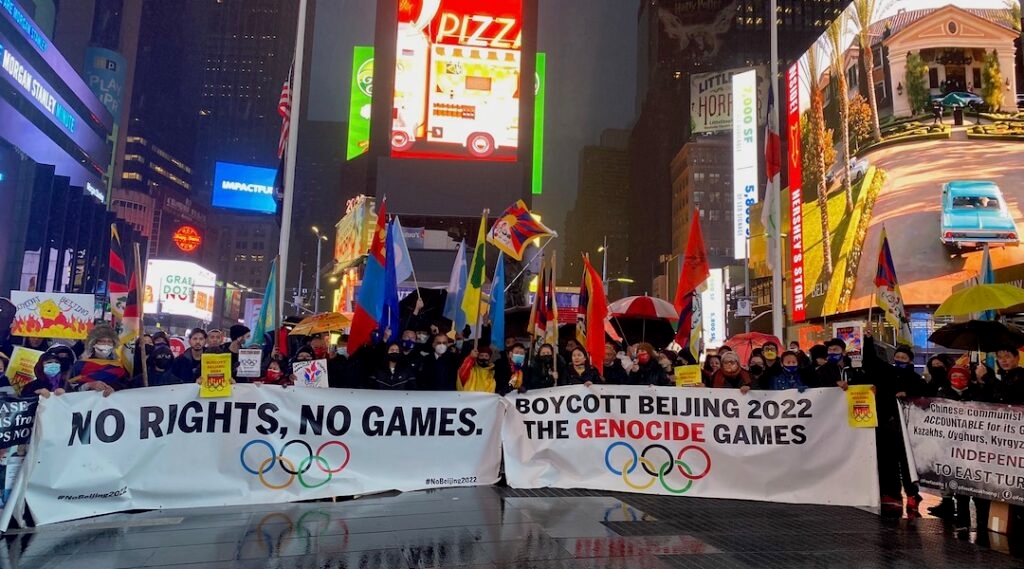 A march from the Chinese Consulate in New York City to Times Square, above, was meant to draw attention to human rights abuses against China’s Uyghur minority, Feb. 3, 2022. (Courtesy #NoBeijing2022)

A full 86 years after the 1936 Olympics in Berlin, the 2022 Beijing Olympics raised similar concerns for activists around the world, who called for boycotts in response to human rights concerns in China.

In particular, China’s persecution of its Uyghur Muslim minority — who have reportedly been placed in “reeducation” camps — was at the center of the anger. Jewish activists helped lead the effort to call for an Olympic boycott.

“The Nazi party used the Berlin games to strengthen its reputation in the world. Two years later came Kristallnacht,” she told JTA in February. Now, she added, “We know what authoritarian regimes that systemically persecute people do, when they build concentration camps and ghettos and forced labor camps.”

The activism was not without consequence: the U.S. announced a diplomatic boycott of the games, as did Britain, Canada and Australia. 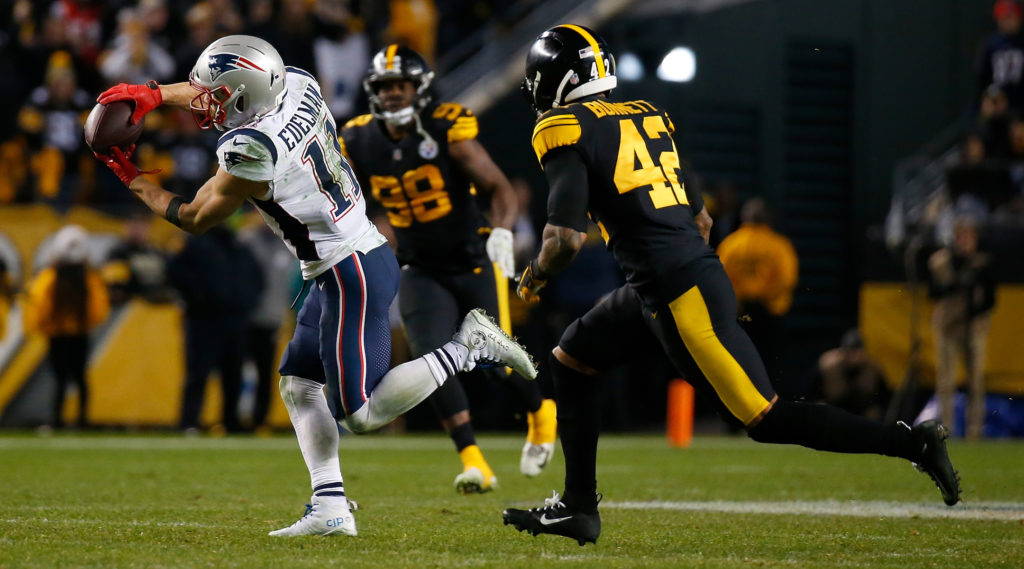 Julian Edelman wears cleats with Hebrew on them to honor the victims of the Pittsburgh synagogue shooting, Dec. 16, 2018. (Justin K. Aller/Getty Images)

When Edmonton Oilers winger Zach Hyman saw pictures on social media of people wearing swastikas and waving Nazi flags in Ottawa, Canada, earlier this year, he knew he had to say something.

“It’s disturbing and disheartening to see that antisemitism is on the rise, unfortunately, which is crazy nowadays,” Hyman told The Athletic. “Seeing that and being Jewish and being proud of my heritage — and it was just Holocaust Memorial Day a couple days ago — and it was right around the time the swastikas were up.”

Hyman is not alone. Former New England Patriots wide receiver Julian Edelman has responded to many of the recent antisemitic attacks across the country in recent years.

Following the mass shooting at Tree of Life Synagogue in Pittsburgh in 2018, Edelman tweeted: “It’s hard to even imagine such senselessness. As a Jew, an American and a human, I’m devastated. We are with you, Pittsburgh.” He wore custom cleats honoring the victims, and later donated them to raise money.

After the Poway synagogue shooting in 2019, Edelman wrote, “I’m sad and angry, but also proud of the strength of our community.”

And in 2020, when NFL player DeSean Jackson stirred controversy with comments about Hitler, Edelman invited Jackson to have “uncomfortable conversations” about antisemitism.

“I know he said some ugly things, but I do see an opportunity to have a conversation,” Edelman said. “I am proud of my Jewish heritage. But for me it’s not just about religion. It’s about community and culture as well.”