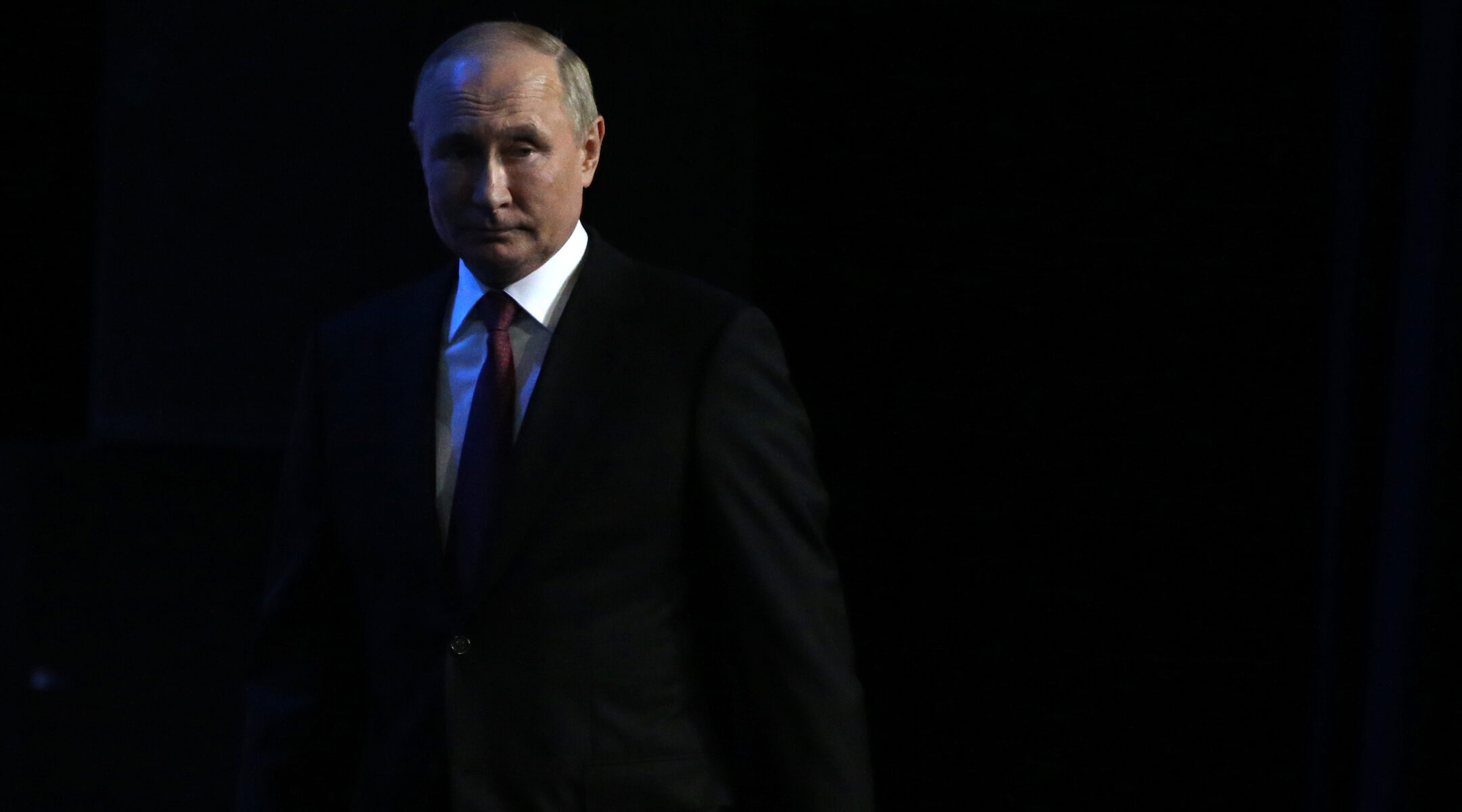 (JTA) — Soon after he rose to power 22 years ago, Russian President Vladimir Putin cracked down on the open antisemitism that nearly all of his predecessors had either encouraged, tolerated or ignored.

Now, as Russia’s war effort in Ukraine founders, openly anti-Jewish rhetoric is entering the country’s mainstream media, with a popular talk show host naming Jews on air as being insufficiently patriotic and a think tank accusing a prominent Jewish philosopher of siding with Ukraine out of greed.

The shift in rhetoric about Jews in Russian media began about two months ago, according to Roman Bronfman, a former Israeli lawmaker who has published a book about post-Soviet Jewry. That was around when news emerged that Ukrainian troops had successfully stopped the advance of Russian forces on Ukrainian territory; since then, they have repelled Russian troops from some areas the Russians had captured.

“At a moment when the regime’s stability was threatened, a Jewish target was selected,” Bronfman said. “In many ways this is a repeat of multiple episodes in Russian history, including the final days of Josef Stalin’s time in power.”

In a country where persecution of Jews had been policy for many decades prior to the Soviet Union’s collapse in 1990, antisemites faced harsh sentencing under Putin— one man in 2019 was jailed for two and a half years for scrawling antisemitic graffiti — and vigorous policing. In another notable instance, in 2020, police in the southern Russian city of Krasnodar had a rabbi fake his own death to trap two terror suspects.

This tough stance, which contrasted with the more laissez-faire approach of his predecessor, Boris Yeltsin, has been politically useful to Putin, who has cited alleged antisemitism by Ukrainians as one of the reasons for his invasion of Ukraine in February. (He may well have warm sentiments for Jews or Judaism on a personal level, as well.)

But Putin’s invasion of Ukraine has left him isolated on the world stage, with his claims of Nazis in Ukraine largely dismissed as a fabrication, making a strong stance against antisemitism less useful. And as Russia’s war machine stalls in Ukraine — Putin this week announced a draft of 300,000 reserves soldiers for the war — there are mounting signs that the Putin-era taboos on displays of antisemitism are falling.

In July, Vladimir Solovyov, a popular talk show host who has Jewish ancestry himself, listed on air the names of Jews whom he faulted for lacking patriotism. That was around the same time that Russia began seeking to end local activity of the Jewish Agency for Israel, which facilitates emigration of Jews to Israel. A court case on the matter is pending.

In recent weeks, the rhetoric appears to be accelerating. In a Sept. 18 article in Moskovskij Komsomolets, a highbrow Russian daily, a senior and veteran writer named Dmitry Popov compiled a list of well-known Jews whom he called “foreign agents,” a term that the Russian government frequently applies to its perceived enemies. He added sarcastically that the Jews might one day form a government in “the beautiful Russia of the future” — ostensibly after Putin exits office.

The article shocked many readers, including Yulia Kalinina, a former longtime writer at the paper who had worked closely with Popov. (It was later revised to omit the apparently antisemitic passages.)

“Antisemitism has returned: Jews are blamed for the ‘beautiful Russia of the future,’” Kalinina, who has Jewish ancestry, wrote in an article published last week in the Novi Izvestiya website.

Speaking anonymously, another former or present employee of Moskovskij Komsomolets told Novi Izvestiya: “Russian antisemitism is much older than the Soviet Union. One of the three Russian words that have become an international term, in addition to vodka, is pogrom.”

More evidence of a shift in tolerance for antisemitic rhetoric came last week as Bernard-Henri Lévy, a prominent French-Jewish journalist and philosopher who is a vocal advocate of Ukraine, visited the war-torn country.

The Strategic Culture Foundation, a Russian conservative think tank that is often cited in mainstream media in Russia and beyond, published a screed about Lévy that used language reminiscent of the classical antisemitism of the 19th and 20th centuries. 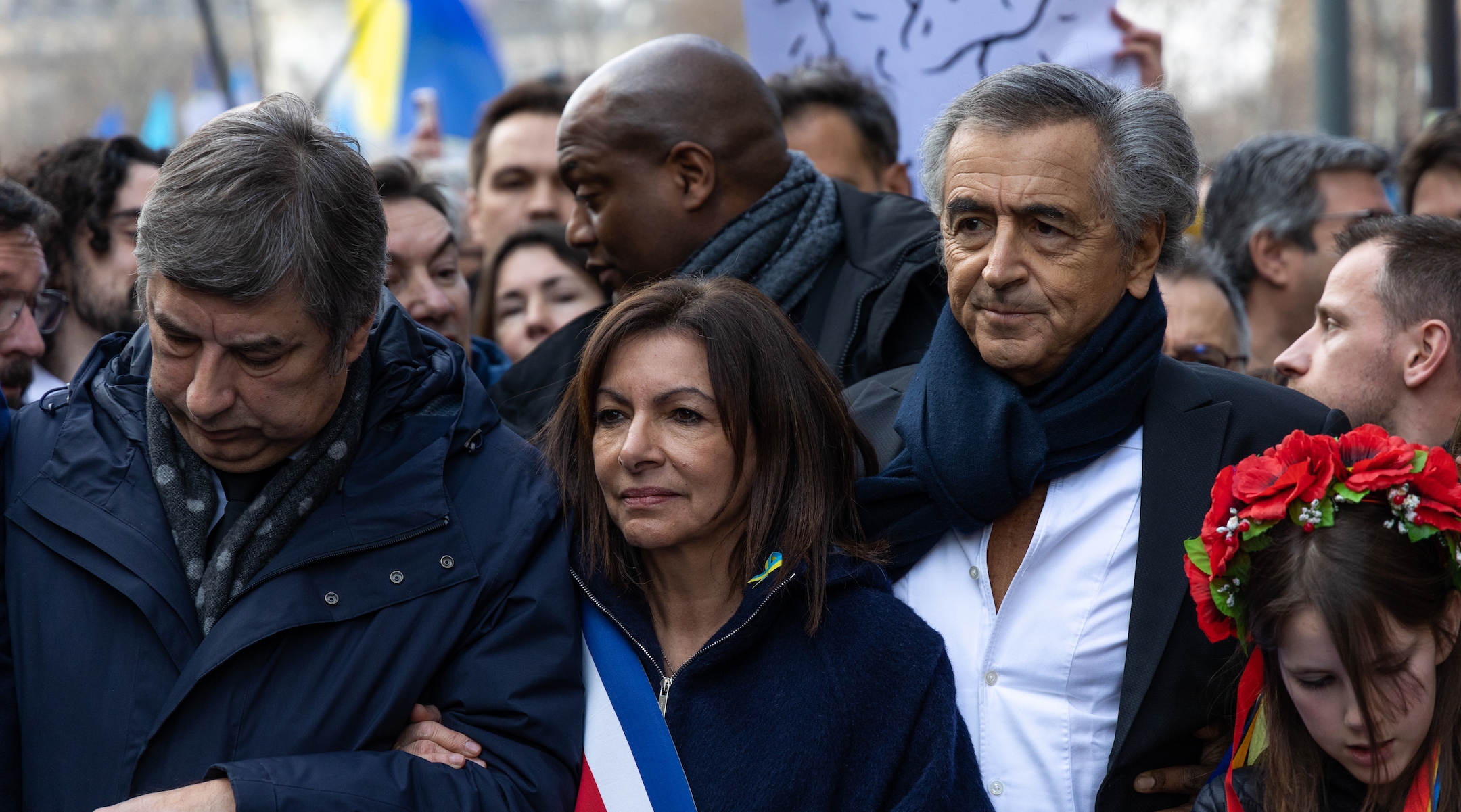 Bernard-Henri Lévy, on right, attends a Paris protest against the Russian war in Ukraine, March 5, 2022. (Jerome Gilles/NurPhoto via Getty Images)

“This 74-year-old French citizen, born in a family of Algerian Jews, smells blood with his nose and, without delay, flies to lap it up — and for good money,” read the article, which was signed by Agnia Krengel, a frequent contributor for the think tank.

The uptick in antisemitism adds to the forces that have caused tens of thousands of Russian Jews to leave their country since Putin invaded Ukraine. About 20,000 people, or 15% of Russia’s estimated Jewish population, have emigrated in 2022 from Russia to Israel under its law of return for Jews and their relatives — and authorities in Israel are preparing for many more now that Putin has begun mobilizing troops to sustain a war he is widely understood to be losing.

The mass exodus of Russian Jews could exacerbate the perception that they are not patriotic. Already, Russian media has noted that Chabad of Russia has appeared to speak of the war critically at a time when all other prominent clerics of state-recognized faiths have endorsed it. Meanwhile, reports have noted that multiple highly-visible Jewish oligarchs — including Roman Abramovich, Viktor Vekselberg and Michael Friedman — have left Russia since the war began. Those reports “led to an optic of Jews abandoning ship when the going gets hard,” Bronfman said.

Bronfman said he doubted that the rising antisemitism came directly from Putin himself. Instead, he said thought it reflected the zeitgeist at a time when ordinary Russians are experiencing privations and even danger because of Putin’s war in Ukraine.

“The antisemitic rhetoric we’re seeing now, the loosening of the taboo around it, are probably not directed directly by Putin’s government. Nor was the perception that Putin cares for Jews. These are matters of a general atmosphere,” Bronfman said. “Officials and the general population are reading between the lines on how they should treat the Jews. And the message is changing.”