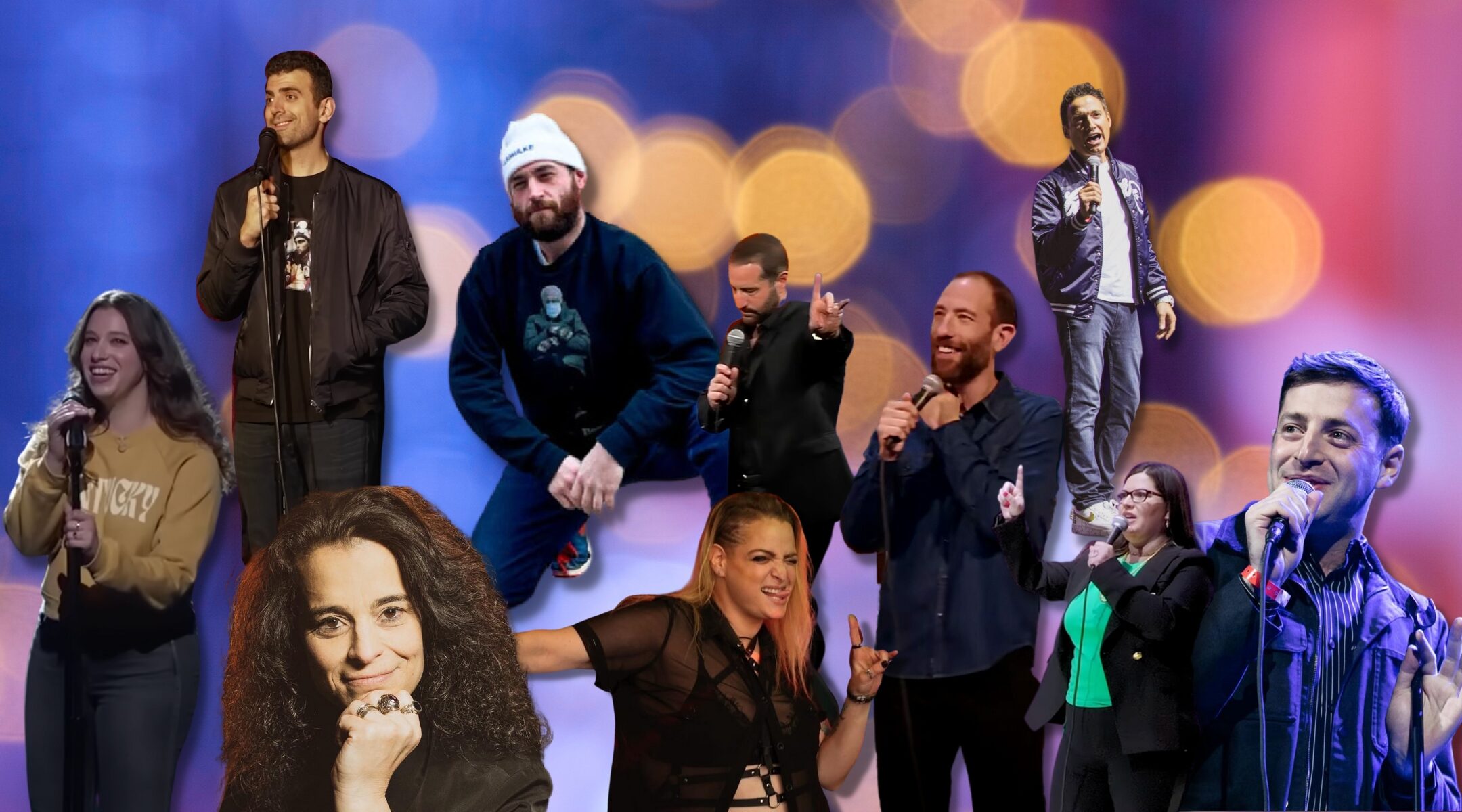 (JTA) — Two weeks after a Trump-supporting heckler threw a beer can at Ariel Elias at a club in New Jersey over her politics, the Jewish comedian’s fortunes took a turn for the better. A video of the incident went viral and she made her network television debut on Jimmy Kimmel’s late-night talk show.

She spent most of her five-minute set talking about her Jewish identity and how it clashed with parts of her upbringing in Kentucky.

“I’m Jewish from Kentucky, which is insane, it’s an insane origin story,” she said last month before getting to jokes about how Southerners mispronounce her name and how badly her parents want her to date Jews.

Even though the crowd found it funny, Elias’ tight five wasn’t particularly groundbreaking. In the world of standup comedy, discussing one’s Jewish identity in a deep way has become increasingly common on the mainstream stage over the past several years. Jewish comedians are going beyond the bagel and anxiety jokes, discussing everything from religiosity and traditions (and breaking with those traditions) to how their Jewishness has left them prone to awkward situations and even antisemitism.

Ari Shaffir calls his most recent special, which was released earlier this month and titled “Jew” — and racked up close to four million views on YouTube in two weeks — “a love letter to the culture and religion that raised [him].” In his recent one man show “Just For Us” — which drew widespread acclaim and a slew of celebrity audience members, from Jerry Seinfeld to Stephen Colbert to Drew Barrymore — Alex Edelman discussed the details of growing up Modern Orthodox (and infiltrating a group of white nationalists). In 2019, Tiffany Haddish released a Netflix special called “Black Mitzvah,” in which she talks about learning about her Jewish heritage.

At the same time, the current uptick in public displays of antisemitism — punctuated by a series of celebrity antisemitism scandals and comedian Dave Chappelle’s controversial response to them — is complicating the moment for comedians who get into Jewish topics. Jewish comics are even debating what kinds of jokes about Jews are acceptable and which cross a line.

“I find it ironic that at a time where more Jewish comedians feel comfortable expressing their Judaism (i.e. wearing a yarmulke, making Jewish-oriented content) and not hiding it (by changing their name for example), we also see an up-swelling of outright antisemitism,” said Jacob Scheer, a New York-based comedian. “I don’t think — and hope — those two things are not related, but I find it really interesting and sad.”

The two phenomena could be related. Antisemitic incidents nationwide reached an all-time high in 2021, with a total of 2,717 incidents, according to an April 2022 audit from the Anti-Defamation League. Those incidents range from vandalism of buildings to harassment and assault against individuals.

“Now that [antisemitism is] a headline, it actually helps me to do what I need to do, which is just be extra out and loud and proud,” said Dinah Leffert, a comic based in Los Angeles. “I was hiding who I am just so I can survive in this environment. But this environment is not worth it if I have to hide.”

Scheer said that “people who are Jewish with an emphasis on the ‘Jew’ are having a moment.”

By “Jew-ish,” Scheer clarified that he means comics like Seinfeld and Larry David, who often infuse secular, culturally Jewish material into their comedy. Their apex of fame came during a time when Jewish comedy was not nearly as mainstreamed — the “Seinfeld” sitcom team was famously told that their idea was “too New York, too Jewish.”

Some of Seinfeld and David’s Jewish comedic successors, such as Judd Apatow and Seth Rogen, sprinkled in more explicitly Jewish jokes before 2010. But today, “you see more Alex Edelmans coming out,” Scheer said, referencing the increase in visibility for comedians with more observant upbringings.

Things have progressed to the level of “Jews doing comedy for other Jews about Jewish things,” Scheer added. In August, the first-ever Chosen Comedy Festival at the Coney Island Amphitheater in Brooklyn featured a lineup of mostly Jewish comics whose repertoires ranged from impressions of old Jewish women (who sound like bees) to breakdowns of the differences between how Sephardi and Ashkenazi Jews say “Shabbat shalom.” Leah Forster, who also performed at the festival, uses her Hasidic upbringing as source material for her standup routines, creating characters and using accents and impressions. (In her early days as a comedian, Forster performed for women-only audiences while she was a teacher at a Bais Yaakov Orthodox school in Brooklyn.)

The festival, which was hosted by Stand Up NY (an Upper West Side club that Scheer says is known for being “the Jewish one”) welcomed a packed audience of about 4,000 guests, many of whom were Orthodox. A second Chosen Comedy Festival will take place in downtown Miami in December.

(The New York Jewish Week, a 70 Faces Media brand, was the media partner for the Chosen Comedy Festival but had no say in its lineup.)

The festival’s co-hosts, Modi Rosenfeld and Elon Gold, who frequently collaborate, both grew their audiences in the early days of the pandemic: Rosenfeld with his camera-facing comedic characters, like the esoteric Yoely who delivers news updates with a Hasidic Yiddish twist; and Gold with his Instagram Live show “My Funny Quarantine,” which featured guest appearances from other comedians. Both Gold and Rosenfeld work antisemitism into their material.

Some are finding the moment difficult to navigate. In late October, at the standup show she runs in Los Angeles, the comic two slots ahead of Dinah Leffert asked the room, “Is anyone still even supporting Kanye at this point?” The crowd responded with resounding whoops, claps and cheers, leading Leffert to feel like they did support Kanye West, the rapper who spent much of last month in the news for his multiple antisemitic rants.

Just a few jokes into her own 10-minute set, Leffert walked offstage.

“My body wouldn’t let me keep being inauthentic about what I was really feeling,” she said. “I don’t want to give laughter to people who are anti-Jewish.”

Leffert, who is openly Zionist, said she also observes a level of anti-Zionism in comedy clubs these days that feels to her like antisemitism.

“They’re not criticizing Israel,” she said. “It slips into antisemitism very quickly. And it’s just a really hostile environment.”

During the last large-scale military flare-up of the Israeli-Palestinian conflict in May 2021, she felt inundated with Palestinian flag comments on posts about Jewish holidays, not Israel.

“You just get Palestinian flags underneath your Hanukkah posts,” she said.

In October, at a club in Omaha, comedian Sam Morril was heckled by an audience member as he told a joke about how he hopes Jeffrey Epstein won’t be honored during Jewish Awareness Month.

“Can I ask why you chose to yell out ‘free Palestine’ after a Jeffrey Epstein joke?” he responded. When the heckler said she was making a “public statement” and was looking for “justice,” Morril answered: “A public statement? At the Omaha Funny Bone?”

Eitan Levine, a New York-based comedian known for his TikTok show “Jewish or Antisemitic” — on which he asks people to vote on whether objects like ketchup and mayonnaise, for example, are Jewish or antisemitic (in a loose comic version of the word) — said he receives similar comments online.

“This is a TikTok video about bagels,” Levine said. “What do you mean, you want me to take a stance?”

Though the response to his show has been largely positive and he has gone viral several times, Levine still receives all kinds of white supremacist comments on his videos — with backwards swastika, money bag or mustachioed man emojis evocative of Hitler, along with comments that say “jas the gews” as a spoonerism for “gas the Jews,” as a way to avoid TikTok censorship. Levine said he manually deletes these kinds of comments, but sometimes that’s not enough; one of the guests on his show had to cancel an in-person show due to online threats made against her.

“This stuff is clearly happening and it is dangerous and it is scary,” Levine told JTA.

Writer and comedian Jon Savitt, whose writing has been featured on College Humor and Funny or Die, and says he has often been “the first Jew that people have ever met,” recently launched an experimental web page called Meet A Jew, where users can connect with a Jewish person, much like a pen pal. His 2016-2018 standup show “Carrot Cake & Other Things That Don’t Make Sense” largely dealt with antisemitism — and its audience, he was surprised to see, was largely non-Jewish.

“Not only did I have people come up to me after the show, but I had non-Jews come up to me months later when they saw me and say ‘tikkun olam‘ [Hebrew for the Jewish principle of repairing the world] to me, or recite Hebrew,” Savitt said. “And to me that was the coolest use case because not only were they there, but they kind of retained something.”

Savitt says he isn’t trying to change any extremists’ minds with Meet A Jew, but he sees it as one step that could engage people who may be ignorant or unaware and give them a place to ask questions.

“Although it shouldn’t be on us to educate everyone or to have to constantly be standing up for ourselves, I think there are ways that we can bring other people into the conversation as well,” he said.