5 things to watch in another Bernie Sanders presidential campaign 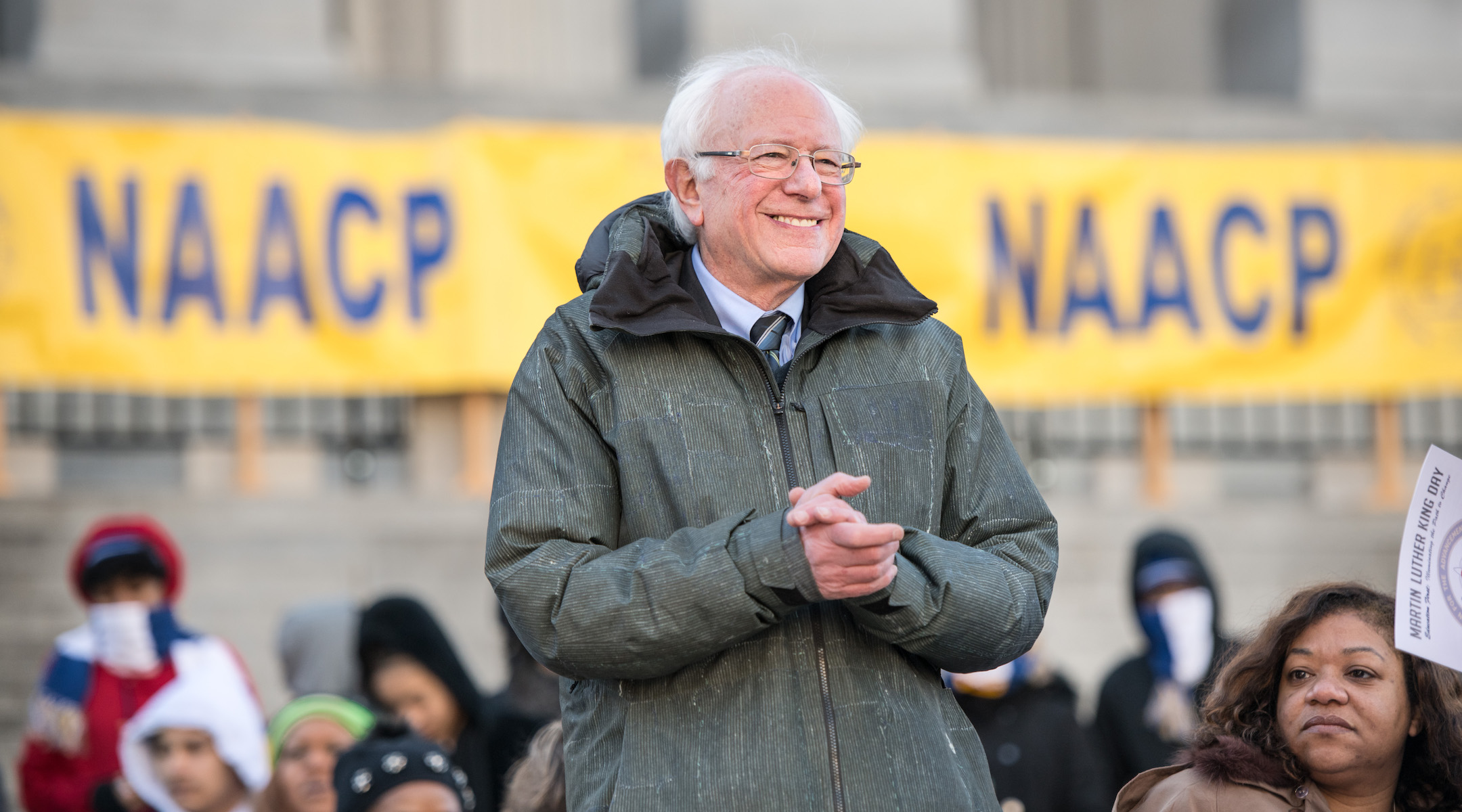 WASHINGTON (JTA) — It’s official: Bernie Sanders is running for president again. And the one thing we know for sure is that Bernie, the sequel, will not be a retread.

Much about Bernie 1.0 was attention-getting precisely because of the way his campaign defied convention. The Independent senator from Vermont attached “socialist” to his name; he hadn’t done foreign policy, and it showed; and his campaign overall was a seat-of-its-pants mess because it didn’t occur to anyone until he won nominating contests that he could win.

At 75, Sanders was the oldest candidate ever to win primaries in the double-digits and, as we’ve typed countless times, he was the first Jewish candidate to win major-party nominating contests.

This time around, Sanders will have popularity and name recognition on his side, and likely, better organization.

Here are five things to look out for in Bernie 2.0.

Sanders was the stand-out at both of the post-election annual conferences of J Street, the liberal Jewish Middle East policy group. His message jibed perfectly with the group’s: One can support Israel while criticizing its government for its settlement policies and for neglecting opportunities for peace.

Sanders has become a forceful and outspoken critic of how Israel handles its relationship with the Gaza Strip, posting multiple online videos packed with facts and figures about the dire humanitarian crisis in the strip and why he believes Israel is (in part) to blame.

That marshaling of facts and figures is quite a contrast with the Gaza related foreign policy fumble that drew attention in 2016 to his lack of foreign policy cred: He vastly overestimated the number of Palestinian civilians killed in the 2014 Gaza war.

Sanders has become the de facto leader of progressives in the Democratic party and his willingness, at times eagerness, to criticize Israel may be a signal of where the party is headed in terms of its relationship with the Jewish state.

Sanders also spent months on a kibbutz in his 20s and harbors an affection for Israel. If there’s one aspect of pro-Israel dogma that he has embraced, it’s that it is ridiculous to attack the country and not note the real threats posed to it by radical neighbors, and the worse human rights records in those countries.

He’s been consistent in decrying what he sees as a double standard applied to Israel. In 2017 he excoriated an Al Jazeera interviewer who challenged him for signing a Senate letter that called for fairer treatment of Israel at the United Nations. In the same interview he also firmly rejected the Boycott, Divestment and Sanctions movement targeting Israel. (He is also outspoken opposing bills that would penalize boycotters, saying they infringe on speech freedoms.)

That’s Sanders off the cuff. The left that Sander represents has lost patience with Israel, and say that comparing Israel to its neighborhoods is classic “whataboutism.” It will be interesting to see if his campaign highlights the tough-love critic who supports Israel, or plays to a disinterested, even non-Zionist left. Interestingly, one of the Gaza videos Sanders posted includes the criticism of Israel he offered in a J Street speech — but omits his defense of the country. He clearly gets along with even the party’s strongest critics: Rep. Rashisa Tlaib, D-Mich., a Palestinian American who embraces BDS, calls him Amo (Uncle) Bernie.

Sanders, historically, did not like talking in public about his Jewish bringing, although his two best friends in Vermont are strongly identified Jews and he is involved there in the Jewish community. He isn’t the first Jew of his generation to not make his Jewish identity front and center in his politics.

Times have changed, and politicians are encouraged, even expected to describe how culture and ethnicity imprint their beliefs. At a point during the campaign, Sanders started talking about how being raised Jewish had shaped him.

It’s a trajectory that has continued post-campaign, with Sanders showing emotion in considering families who have perished during the Holocaust.

Sanders campaigned for the candidate who defeated him for the nomination, Hillary Clinton, but wounds remain. Clinton in her campaign biography, “What Happened,” said Sanders was not committed enough to the party.

More significant was the rift that opened up between the candidates’ supporters over whether Clinton’s embrace of identity politics among women and minorities was the party’s future, or whether it alienated the working class whites who eventually voted for Donald Trump. Sanders, despite a strong civil rights history, appeared allergic to what he called pandering, especially to African-Americans. It cost him, especially in southern states where, he notes in his campaign autobiography, we “got decimated.”

He has worked hard to make up for the support he lost among minorities. He chose South Carolina, a nominating state where blacks turn out in large numbers in the Democratic primary, to forcefully denounce Trump as a racist.

What’s worth watching is whether he backslides and the wounds reopen: He may be under pressure to distinguish himself from other Democratic candidates who will be seen as empowering women and minorities, like fellow senators Kirsten Gillibrand of New York and Kamala Harris of California.

And he may be falling into old habits. His initial response to recent allegations that sexual harassment proliferated during his 2016 campaign was wanting: He said he’d been too busy to notice. In a recent deep dive by GQ, he once again denounced identity politics in less than sensitive terms, earning more rebukes from the party’s Clinton wing.

Sanders will be 79 when he runs again, which would, should he win the nomination, make him the oldest major party nominee ever.

Democrats are loath to appear ageist, but the issue already has reared its head in the campaign of Pete Buttigieg, the 37-year-old mayor of South Bend, Indiana. Buttigieg once lionized Sanders for daring to call himself a “socialist,” but gently suggested in a recent Washington Post profile that perhaps it was time for the senator to make way for the next generation.

“The politics of conviction that appealed to young people, with Bernie in 2016, can also be articulated successfully by the next generation,” Buttigieg said.

Sanders waited in 2016 until the end of the campaign to focus his energies on Trump, perhaps because, like many others, he did not believe the reality TV star had a serious shot until it was too late.

That’s changed. In addition to calling Trump a racist, he has articulated his foreign policy as the anti-Trump: embracing and emphasizing human rights in dealing with other countries, and confronting autocrats.

As for Trump, we have an idea of what his anti-Sanders gambit would be: The nick-namer in chief refers to the senator from Vermont as “Crazy Bernie.”