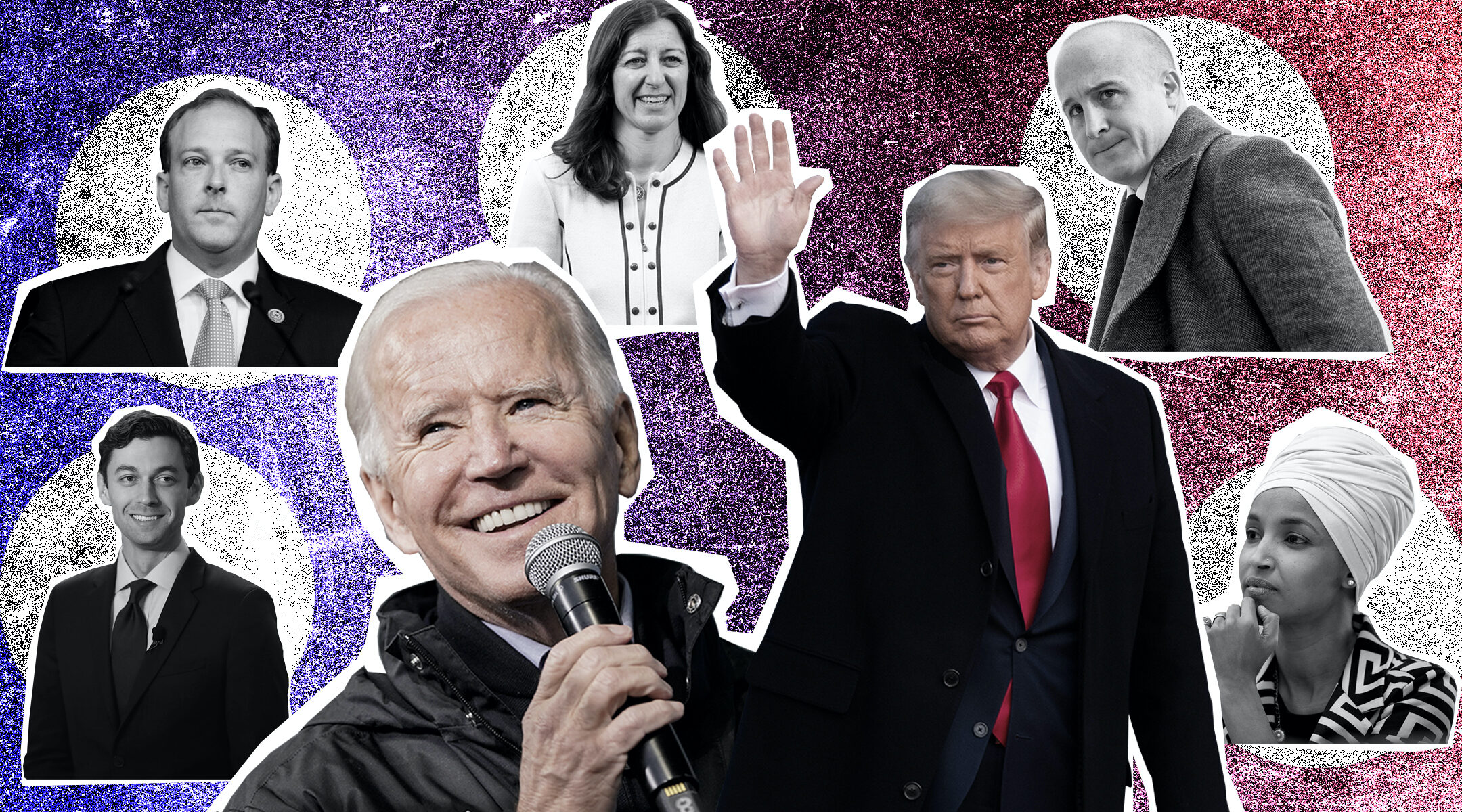 (JTA) — Besides the presidential election, the 2020 elections featured hundreds of races across the country with huge implications for local and national politics.

Several had higher stakes for the Jewish community, whether they involve key Jewish politicians or issues that American Jews are particularly concerned about.

These are the races we’re watching closely. We’ll update this article with results as they are available.

This race goes without explanation: It’s the main event, a clash of two drastically different world views with two very different sets of consequences for the Jewish community. Will Donald Trump continue to advance his right-wing agenda on almost every core issue that the liberal majority of American Jews hold dear, from abortion to immigration to a two-state solution? Will Joe Biden get a chance to implement his ambitious liberal agenda and possibly shift away from the Trump Middle East policies that have been celebrated by the overwhelming majority of Orthodox Jews in America and Israeli Jews?

We may not know for days or weeks. But we will likely know a few important things on Tuesday night — such as whether or not Trump decides to act on his stated desire to claim a victory before the count is complete, and how Jewish voting rights groups fared in their mission to make sure votes were counted.

Al Gross, a Jewish Independent who is being supported by Alaska Democrats, has mounted a serious challenge against incumbent Sen. Dan Sullivan, who has been hurt by his ties to a project that would mine a beloved mineral-rich region of southern Alaska. In the last days of the campaign, Sullivan ran an ad that fell into anti-Semitic trope territory, depicting Gross holding a wad of cash in front of an image of Sen. Chuck Schumer, who is also Jewish, lurking in the background.

Jon Ossoff, who unsuccessfully ran for Congress in 2018, has been polling in a dead heat with incumbent Republican David Perdue. That was before clips of the 33-year-old Jewish former journalist lashing out against Perdue in their most recent debate — on several issues, including an ad Perdue’s campaign ran that appeared to elongate Ossoff’s nose — went viral.

Both of Gross and Ossoff’s races are crucial for the Democrats’ hopes of retaking the Senate.

Ben-David, an Israeli-American scientist at the University of Wyoming who ran as a Democrat, was unlikely to win in her ultra-conservative state.

Matt Lieberman vs. OTHERS, Georgia

Matt Lieberman, son of Joe, ran as a Democrat for Georgia’s other Senate seat, but even members of his own party wanted him to drop out of the race, wary that he will take votes from the Democratic frontrunner, Raphael Warnock. In the end, he drew only a negligible number of votes, and Democrat Rev. Raphael Warnock will face off against Sen. Kelly Loeffler, a Republican, in a runoff in January.

Zeldin, the senior Jewish Republican congressman (of two in the House) faces a close challenge from Goroff, a chemistry professor who is also Jewish and has hammered Zeldin on his attitude towards the pandemic. An upset by Goroff would deprive Republicans of their go-to congressional frontman on Jewish issues.

The freshman congressman Rose is locked in a dead heat with a Republican challenger in one of New York’s most conservative districts. The Afghanistan veteran has been notably unafraid to work across the aisle on anti-Semitism, Israel legislation and other Jewish issues in his first term.

Slotkin is a poster child of the moderate Democrats with national security backgrounds (several of them Jewish) who helped lead the “blue wave” in 2018 that helped her party retake the House.

Luria is another member of the moderate Democratic group that includes Slotkin and Rose, but she became much more vulnerable in her military-heavy district after voting to impeach Trump and participating in other Democratic legislation.

This Jew vs. Jew race has seen the “which threat is more dangerous for the Jews, left-wing or right-wing anti-Semitism?” question come up in debates. Wild, a Democrat who flipped this seat in 2018, has a good chance of winning again.

Manning was the first woman ever to chair the Jewish Federations of North America.

Schupp, a Jewish Democratic member of the Missouri’s State Senate, is deadlocked with incumbent Ann Wagner, who only won in 2018 with 51% of the vote.

The Jewish businessman Richter, who had major Republican Jewish Coalition backing for his robust rejection of the Iran nuclear and other issues, had a shot at ousting the freshman Kim in purple southern New Jersey.

The Republican Kustoff will be reelected in his red district and remain the GOP’s second crucial Jewish member of Congress (if Zeldin wins his tight race, or the most senior if he loses).

Greene, whose Democratic challenger dropped out of the race in September, made headlines throughout the campaign cycle as the first member of Congress to believe in the QAnon conspiracy theory, which experts say is rich in anti-Semitism.

Frankel, the Jewish moderate Democrat incumbent, faced an upstart challenge from Laura Loomer, a self-described “Islamophobe” who has gotten banned from Twitter and ride-sharing apps for her controversial views. The race made headlines for its clash of cultures, but Loomer didn’t have much of a numerical chance.

Omar earned the ire of some American Jews for being one of two current members of Congress to support the boycott Israel movement, and for invoking what some have called anti-Semitic tropes in her criticism of the AIPAC Israel lobby (she landed in hot water again this year for a mailer that named her opponent’s Jewish donors). She faced a respectable primary challenge from a pro-Israel progressive but emerged victorious and faced sure reelection in her very blue district.

Tlaib, the other current House member who supports a boycott of Israel and a member, along with Omar, of the progressive “Squad,” was similarly expected to cruise to victory in her district after a closer primary win. She and Omar were blocked from entering Israel in 2019 over their BDS support.

Bush, who has expressed support for BDS on her website, defeated a longtime pro-Israel Democrat in her August primary. She was considered a shoo-in in her district and will become the third member of Congress to indicate support for BDS.

Schiff, one of the most prominent Jewish lawmakers in the country after leading impeachment proceedings against President Trump, cruised to reelection. But his Jewish opponent was been able to ruffled feathers along the way, by calling George Soros, the Holocaust survivor and liberal donor, a Nazi sympathizer. He also incorrectly accused Schiff of being related to Soros.

Auchincloss, a 32-year-old former Marine and former Republican (as pointed out by several of his Democratic rivals) with a detailed website section on Israel policy, won a highly contested Democratic primary for former Rep. Joe Kennedy’s seat (yes, of those Kennedys) that involved several other Jewish candidates.