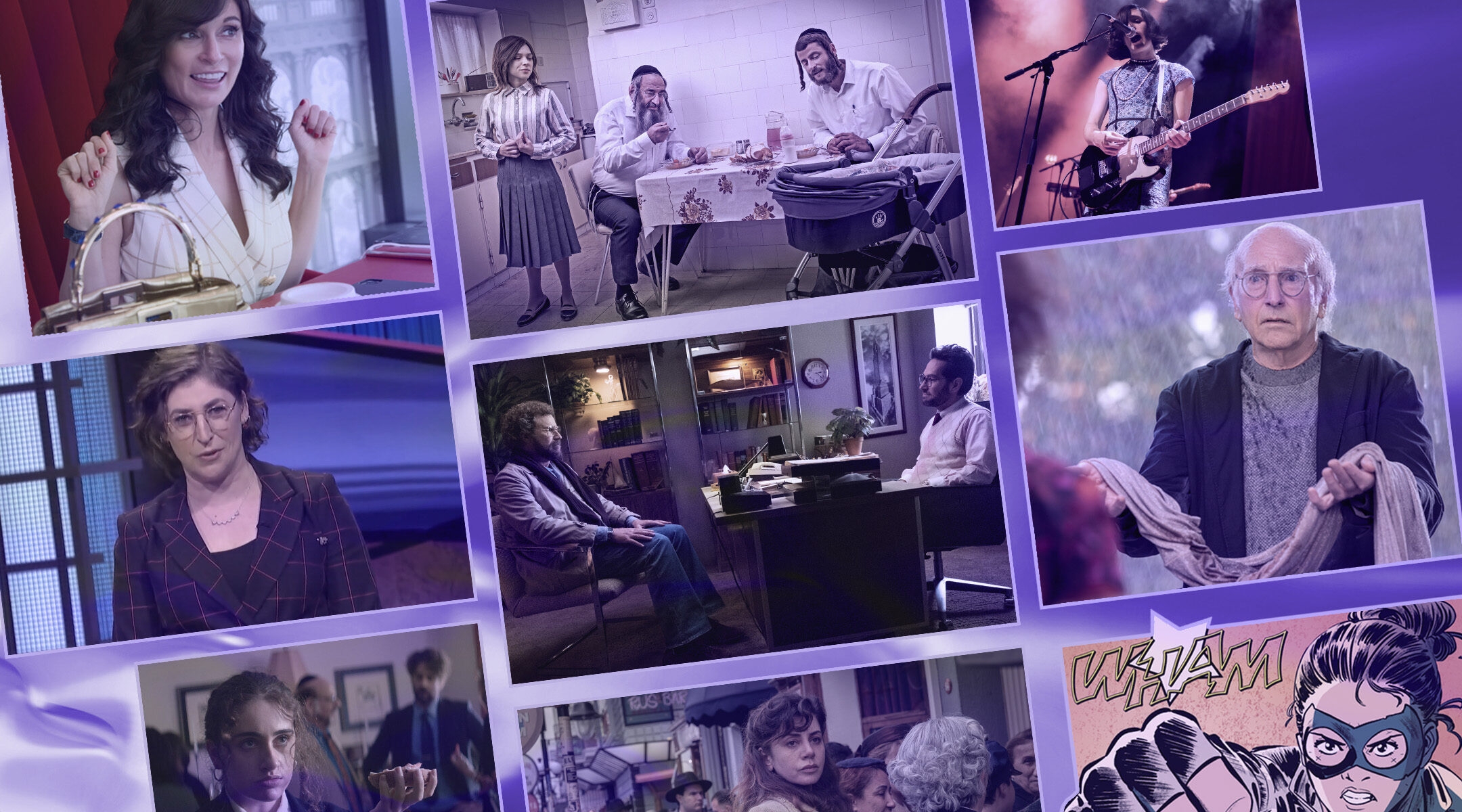 (JTA) — Jewish pop-culture had quite the “Unorthodox” year.

A new reality-TV sensation, a raunchy indie-film spin on shivas and a rare glimpse into Turkey’s Jewish community made a big splash in 2021, while elsewhere, old favorites (“Curb Your Enthusiasm,” “Jeopardy!,” “West Side Story”) made big impacts in the Jewish world. The Jewish Telegraphic Agency covered every twist and turn that kept us entertained and enlightened during this difficult year.

Below, you can find the greatest hits of JTA’s 2021 Jewish pop-culture coverage.

A bold new voice in Jewish filmmaking emerged this spring: Emma Seligman’s independent dark comedy “Shiva Baby” follows a drifting college student who attends a shiva along with her clueless family, disapproving strangers, bitter ex-girlfriend … and sugar daddy. The future cult hit has been nominated for an Independent Spirit Award for best microbudget feature of the year, and successfully launched the career of its 26-year-old writer-director. Our sister site Hey Alma interviewed Seligman about the film last year. She was also one of The New York Jewish Week’s 36 Under 36 for 2021.

“Minyan,” directed by Eric Steel, was another fresh take on a Jewish story: a queer coming-of-age tale set among the Soviet Jewish refugee communities of 1980s Brighton Beach. Starring Broadway star Samuel H. Levine, it was — in my estimation — the best Jewish movie of the year.

Three major Oscar contenders this year have Jewish ties: Steven Spielberg and Tony Kushner’s remake of “West Side Story” once again poses the question of who should make the musical; “Licorice Pizza” stars Jewish rock musician Alana Haim as a young Jewish aspiring actress in the 1970s; and “The Tragedy of Macbeth” marks the solo directing debut for Joel Coen, one-half of the greatest Jewish filmmaking duo of the modern era. (Look for forthcoming JTA coverage of “Licorice Pizza.”)

Wes Anderson’s “The French Dispatch,” a celebration of midcentury print journalism and Francophilia rendered in the filmmaker’s distinctive style, included its fair share of nods to real-life Jewish intellectuals — and an explicitly Jewish character. 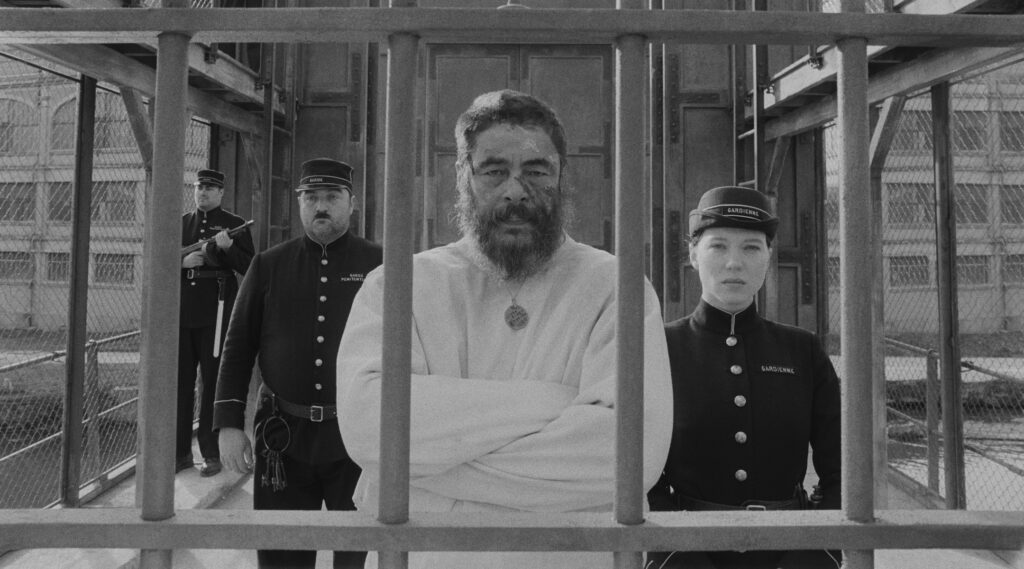 “The Vigil” is a horror movie set in the Orthodox community, focusing on the mazzik, a Biblical demon. Director Keith Thomas spoke to JTA about how the film’s Talmudic terrors came together.

A filmed version of the smash-hit Broadway musical “Come From Away,” a September 11 story created by Jews and featuring Jewish themes, premiered on Apple TV+ for the 20-year-anniversary of the attacks.

A real-life Jewish gangster gets his due — and is played by Harvey Keitel — in “Lansky.”

Israeli film imports to the U.S. shone brightly this year, with the disability family dramas “Asia” and “Here We Are”; melancholy comedy “Golden Voices”; and intergenerational, cross-continental LGBT+ drama “Sublet.”

As Israel and Gaza burned this summer and national dialogue around the conflict turned ugly, Israeli filmmaker Ra’anan Alexandrowicz’s documentary “The Viewing Booth” explored how one American Jew’s preconceived views about the conflict impacted her interpretation of video footage from the region.

In the world of Holocaust cinema, the documentary “Final Account” interviewed elderly former Nazis about their memories of the Third Reich; the documentary “Love It Was Not” depicted the unsettling relationship between a Jewish prisoner of Auschwitz and her SS guard; the Slovakian drama “The Auschwitz Report” told the story of two camp escapees who tried to warn the world about the horrors inside; documentary “The Meaning Of Hitler” tried to break down fascism’s appeal in the modern age; and the documentary “Speer Goes To Hollywood” explored the lifelong denialism of Hitler’s architect (though its methods have been criticized).

The summer musical “In The Heights” told the stories of Dominican residents of a historically Jewish New York neighborhood.

The biggest Jewish TV phenomenon of the year was the Netflix reality series “My Unorthodox Life,” following the controversial exploits of “ex-Orthodox” fashion designer Julia Haart and her family; Haart pushed back against her critics in our interview with her. The show spawned a new tabloid feeding frenzy; one of Haart’s daughters split from her husband, starting an internet obsession. 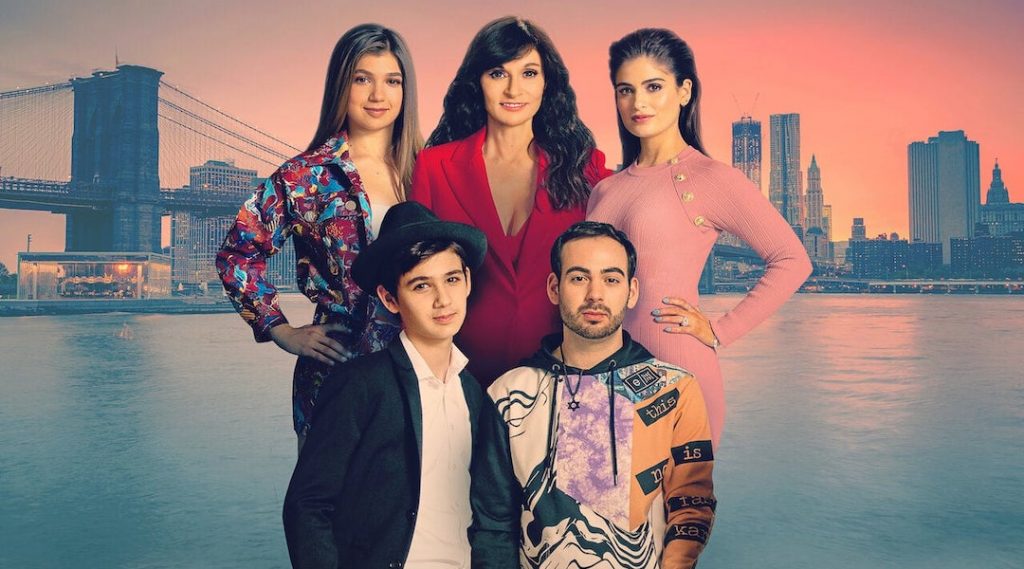 The year was also dominated by “Jeopardy!” hosting drama, with Jewish actress/presenter Mayim Bialik eventually being crowned co-host of the long-running quiz show through 2022… after a former executive producer’s attempts to finagle the job for himself blew up in his face. (Among would-be host Mike Richards’ myriad troubles: he made antisemitic remarks on a podcast.)

The HBO phenomenon “Succession” introduced a Jewish character (played by Adrian Brody) who causes business trouble for the beleaguered Roy family. The mansion Brody’s character lives in is actually owned by a Jewish billionaire.

A smash-hit podcast about a therapist’s obsession with his troubled client inspired the Apple TV+ miniseries “The Shrink Next Door,” starring Paul Rudd and Will Ferrell. The show has deep New York Jewish roots; a Brooklyn politician even had something to say about sharing a name with the real-life patient.

“The Club,” a surprise-hit Turkish drama series from Netflix, explores Istanbul’s Sephardic Jewish community of the 1950s, and features a surprisingly large amount of spoken Ladino. Read our profile of the show.

The very Jewy “Curb Your Enthusiasm” returned to HBO for its 11th (and, some might say, Jewiest) season of Larry David’s legendary complaints. Plotlines this season included Larry fending off a Klansman with a shofar, and Jon Hamm learning Yiddish so he could deliver a fake eulogy for Albert Brooks. Read our interview with series co-star Susie Essman and our review of an HBO documentary about departed cast member Bob Einstein.

“Curb” co-star Jeff Garlin got into some hot water at his long-running ABC sitcom “The Goldbergs,” about a Jewish family in the 1980s; he’s exiting the show midway through its ninth season following an investigation into allegations of on-set misconduct.

“Shtisel,” the slow-burn drama about Israeli haredi Orthodox Jews, released a long-awaited third season, to familiar acclaim. And it was announced that respected director Kenneth Lonergan will helm an American remake of the series.

The second season of “Dave,” the heady sitcom from Jewish rapper Lil Dicky (Dave Burd), aired on FX and established its creator as a new force in TV comedy. It contained plenty of Jewish jokes, and an entire bar mitzvah episode.

Israeli TV showrunner Hagai Levi resurrected the Ingmar Bergman classic “Scenes From a Marriage” for an HBO miniseries starring Oscar Isaac and Jessica Chastain, in which Judaism played a significant part of the story. Read our profile of Levi.

The hosts of Showtime’s “Desus & Mero” visited a New York synagogue and, with the help of Jewish actor Eric Andre and a rabbi, had a bar mitzvah of sorts. 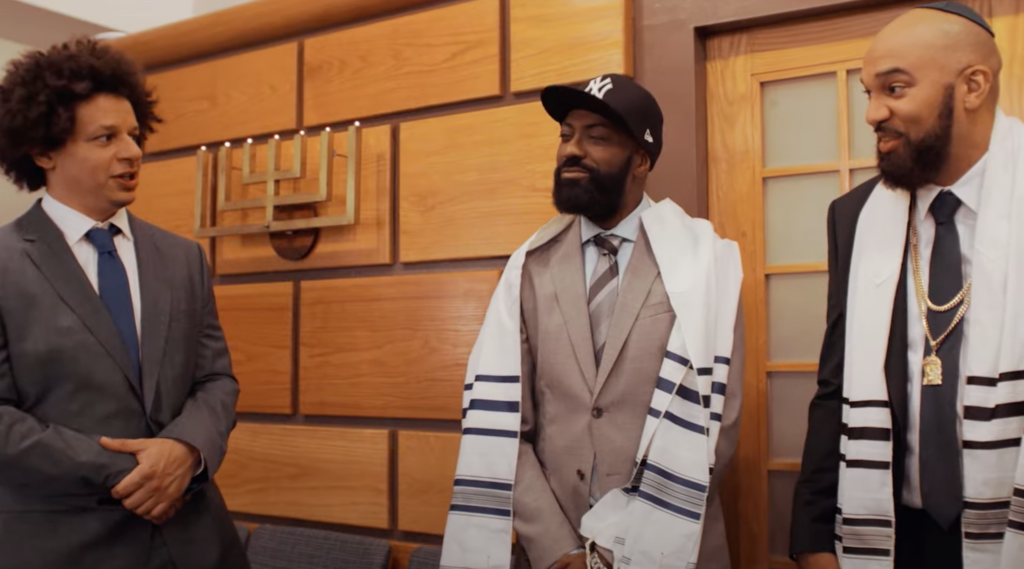 From left: Comedian Eric Andre, Desus Nice and The Kid Mero are seen in The Village Temple in New York City during an episode of “Desus & Mero.” (Screenshot from YouTube)

Netflix’s academia satire “The Chair” featured a professor who causes controversy by jokingly performing a Nazi salute in class — an incident possibly based on real life.

The PBS geneology show “Finding Your Roots” welcomed Mandy Patinkin, and revealed that he had lost family in the Holocaust.

In the world of food, Padma Lakshmi explored the Jewish culinary traditions of the Lower East Side in her Hulu series “Taste the Nation,” while the latest season of “The Great British Baking Show” featured fan-favorite contestant Jürgen, whose recipes are frequently inspired by his Jewish wife.

“American Ninja Warrior” featured a contestant, Liba Yoffe, who is an Orthodox mom.

And on “South Park,” proud antisemite Eric Cartman did the unthinkable — he converted to Judaism.

Novelist Dara Horn’s essay collection, “People Love Dead Jews,” probed the ways in which murdered Jews have been fetishized in global culture – and provoked months of discussion and debate. Watch my interview with Horn conducted for the 2021 Detroit Jewish Book Fair. 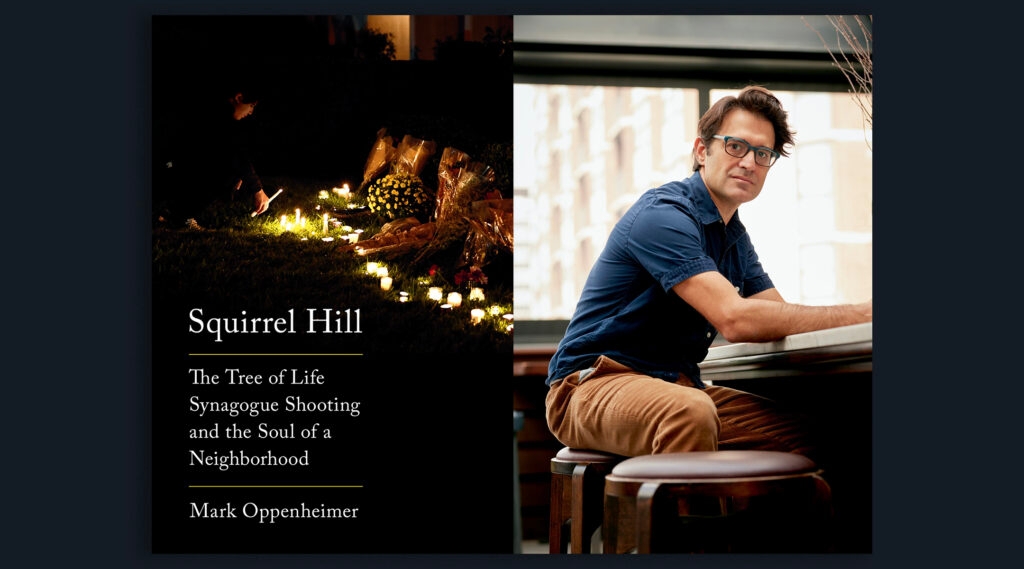 Author Mark Oppenheimer profiled the Squirrel Hill neighborhood of Pittsburgh in the aftermath of the Tree of Life synagogue shooting for his new book. (Lotta Studio)

Whistle, Gotham City’s newest superhero, is Jewish, and her secret identity is Willow Zimmerman – courtesy of her creator, secular Jewish comic-book artist E. Lockhart. Read our feature on the significance of Whistle’s debut in the Jewish superhero canon.

The beloved Jewish children’s-book series “All-of-a-Kind Family” and its author, Sydney Taylor, are lovingly profiled in the biography “From Sarah to Sydney: The Woman Behind ‘All-of-a-Kind Family’,” by Jane Cummins and Alexandra Dunietz. Read the NYJW’s feature on the woman and her pioneering books.

“Plunder,” a memoir by Menachem Kaiser, chronicles his efforts to reclaim his grandfather’s property in pre-war Poland – and his run-ins with Nazi-obsessed treasure-hunters along the way. Black and Jewish rapper Doja Cat became one of the world’s most-streamed artists with the release of her Grammy-nominated third album, “Planet Her.”

In a first, an Ethiopian-Israel represented Israel at the Eurovision international pop song contest. Eden Alene, who became a sensation in her home country for winning the Israeli version of “The X-Factor,” didn’t win — but she became a symbol of representation, and her song had lyrics in four different languages.

Jack Antonoff, the Jewish-day-school-grad-turned-in-demand-pop-producer, won a Grammy for his work with Taylor Swift on her acclaimed “Folklore” album, and was nominated in the fall for more, for subsequent work with Swift.

A prominent fashion podcaster apologized to the Jewish community after saying “some really crass and reductive things about Jewish people.”

And finally (horn-tooting alert), I made “Radioactive,” a podcast about Father Coughlin, the antisemitic Detroit radio preacher from the 1930s whose rise anticipated decades of America’s hate-fueled media landscape.